At London Men's Fashion Week Fall/Winter 2018, designer Edward Crutchley discusses his push for textile quality, and why he doesn't make clothes for men.

With his print-laden Fall/Winter 2018 show behind him, Edward Crutchley was able to catch up with Document’s Alice Lefons at London Men’s Fashion Week and discuss why he doesn’t differentiate his designs by gender, and why ancient cultural symbols and emojis have more in common than you’d think.

Alice Lefons—I heard that you finished the collection a month before the show?

Edward Crutchley—It was not quite a month, [Laughter.] but we had 90 percent done before Christmas. I don’t see the need to stay up all night the week before. If you know what you’re doing and you get your stuff together, it’s not necessary.

Alice—It also feels like these pieces need to be done early, because of how intricate the prints and materials are.

Edward—Yes, I have a lot of experience with developing fabrics through my consultancy work. I know what the fabric is going to do; I know how it’s going to behave. But you do have to put a lot of thought into “Where is that baby’s head emoji going to end up on this dress?”

Alice—How does it feel to be a London designer; do you ever see yourself moving?

Edward—I spend a lot of my time between London and Paris, so I don’t necessarily feel like I’m in the gang of London designers. I show in London because I like showing in London. It’s home. It makes more sense; all my factories are here, my team is here. Let’s see where we go next.

Alice—In the last collection, there was perhaps more of a British element, while this time you branched out to more something more exotic. Was this a purposeful decision?

Edward—I was thinking a lot about my own Britishness, then. That had become a really key element to me. As I’m moving forward, I am becoming more global in my referencing. It’s just about things that I find beautiful. I don’t care where they’re from or how they’re going to go together.

Alice—Although you’ve always had women’s elements in your collections, this time you actually showed clothes on female models. Where did this decision come from?

Edward—It was partly a commercial decision. But also, if you have an idea you think is beautiful, it’s not relevant who is going to be wearing it—whether it’s a man or a woman. I don’t even think it’s relevant who you show it on. I wanted to show a more complete idea of what I think beautiful clothes are. 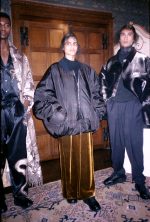 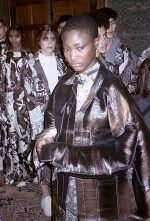 Alice—You’re still showing skirts on boys. You’re not moving away from that, but I thought it was great to also see the girls. Are the construction of the men’s and the women’s pieces the same?

Alice—Textiles were such a big element in your collection, do you work on the development of the fabrics yourself?

Edward—Yes, that’s really my speciality. That’s what I do as my consultancy work; I’m a fabric development specialist.

Alice—Do you make the prints as well?

Edward—I work with a very good friend of mine who’s an amazing print designer. I could do it on my own, but I know he can do it better. We’ve worked closely for nearly ten years. We don’t really have to talk about what we’re doing.

Alice—You have such unique, and instantly recognizable prints, what was the driving influence for them?

Edward—The emoji print is an homage to the print from the Yves Saint Laurent 1971 Scandal collection, which had these amazing greek figures. Very large, very overscale. We’ve reworked it completely; there’s no direct similarity, but I liked the referencing. I’ve also been very interested in the 16th century Chinese novel Journey to the West. I’m obsessed with monsters and mythology. We drew all these Chinese characters, but in a Greek style, because I liked that mashing together of two very ancient cultures. Then we took nine emojis and hid them in the print.

“If you have an idea you think is beautiful, it’s not relevant who is going to be wearing it—whether it’s a man or a woman.”

Alice—So in each piece there’s an emoji?

Edward—Yes. We have the bomb, dove, angel, and skeleton holding some grapes somewhere. They are totally incorporated into the print, so it’s a true collaboration. I like that they’re really obvious and that was the challenge for me. I’ve really enjoyed working with emoji. It was something a bit lighter for me, because I sometimes feel that what I do can get a bit serious.

Alice—It adds a sense of humor.

Edward—They’re kind of fascinating, emojis. Our oldest way of communicating is with pictures. I felt that was really interesting, the super modern and the super old.

Alice—It’s amazing to see the collection up close, there’s so much detail and the materials feel amazing.

Edward—Well, I always try to push for the very best quality that I can, I think it’s so important.

Alice—It comes from you having all this experience, there’s no cutting corners. 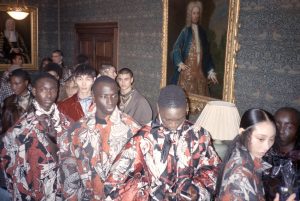 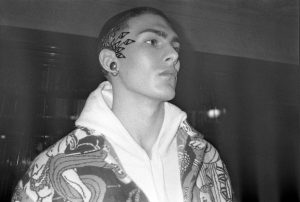 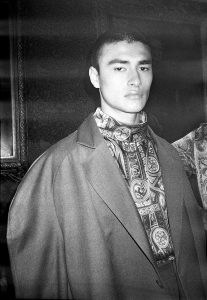 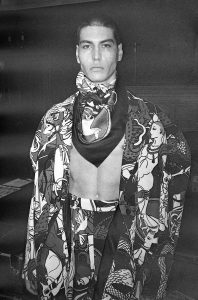 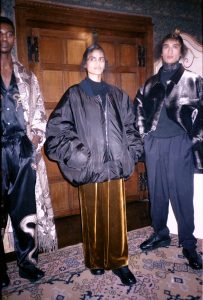 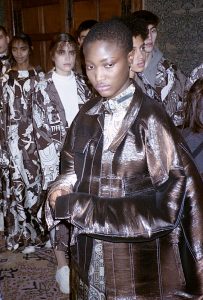 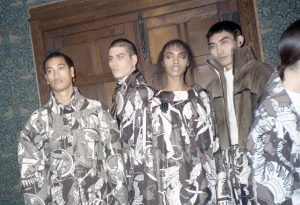 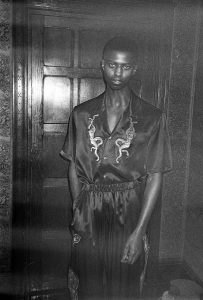 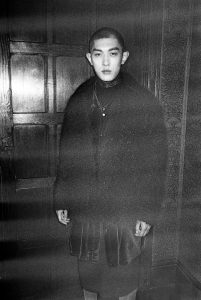