Good art takes time; it sounds simple enough, but the reality is that in today’s fast-moving world the creative process can feel like a burden on the maker and often the art market itself. Sandro Kopp is one artist learning to keep time on his side. In the age of the insta-selfie, Kopp charts a distinctly different path; he paints self-portraits, as well as those of his friends and loved ones, with a commitment to naturalism and compositional balance that recalls the Renaissance masterpieces of Albrecht Dürer—paintings which no doubt took days, months, even years to complete.

“Take Time,” which opens tomorrow, October 8th, 2016, at Galerie Eric Dupont in Paris, is a formal presentation of Kopp’s ongoing relationship with this concept. The exhibition spans 13 years of the artist’s work, and consists entirely of portraits that began out of live, one-on-one sittings with his subjects lasting anywhere between two and six hours. “Painting from life can provide a particular point of view that painting from a photograph simply can’t,” says Kopp of his approach, adding that “without those initial few hours of sitting with the person there would be something missing.” That being said, Kopp is not afraid of using the camera as a starting point, too. In “Feedbackloop,” his most recent show in New York, the artist exhibited several series of portraits painted exclusively via Skype conversations. As the first of each series was finished, he turned the camera on the painting itself and re-painted it, abstracting it further and further through the pixelations on the screen, which, as Kopp describes, created a sort of “instant impressionism.”

For the new show, Kopp powers down his monitor completely, trading instant impressionism for a much more gradual, time-sensitive approach. In the central paintings—”Take Time I,” “II,” and “III”—year’s worth of palette-scrapings surround the figure, “blobs,” as he refers to them, of encrusted oil paint that have “slowly built up, collecting time, like a coral reef.” Although ornate in contrast to the subject rendered in the center, these “reefs” are not so much frames for the painting as they are visual, and, indeed, temporal records of the process required to create a work of art. For Kopp, they are also a means of underscoring the objecthood of the paintings. His intent, he says, is “to move the painting out of the realm of being a ‘picture of something,’ but rather to be a thing within itself. A thing that is of someone, rather than just a representation of someone.”  Advancing his own artistic ethos, Kopp affirms, “Mediated presence has always been the main substance of my work, but the emphasis for me is more on the presence than on the mediation. It’s so interesting that we can have these very deep relationships with the mediation of someone—be it painting, photography, film or literature—despite the fact that there is nobody actually there.”

Can a work of art ever convey the essence of the thing it seeks to represent? The question plagues the entire history of art. Perhaps the best answer is this: art can try. Kopp’s paintings make use of gold, platinum, and palladium leafing, a technique employed in pre- and early-modern Western religious iconography to elevate the subject above the level of the viewer and, thus, emphasize an encounter with the divine. But the figures in Kopp’s paintings are, of course, not “divine” in the traditional sense; they are members of this world—of his world—a world of friends, family, and loved ones. Nevertheless, they appear sacred still, a status Kopp readily acknowledges. “I think there is the same spirituality and sense of community…the same ‘fix’ to be found that people find in religion—within the creative company of friends and family,” he notes. “When you see art—especially when you make art together—it can be a really profound experience, so it made sense for me to elevate these loved ones I’ve painted to a sort of personal sainthood.”

Elevated saints they may be, though not for the purpose of drawing a line between the subject and viewer of the painting. If anything, Kopp hopes his use of religious iconography draws the viewer closer to the subject, just as the subject drew him to the canvas. “When you love someone,” he explains, “they have a particular radiance about them…It can be so strong that it literally affects the way you look at them. As a species, we see psychologically and emotionally. The way we feel about something or someone changes the way we see them. The gold and platinum in these recent paintings provides this particular aura of specialness and preciousness.”

“Take Time” will be on view from October 8 until October 29th, 2016 at Galerie Eric Dupont in Paris, France. 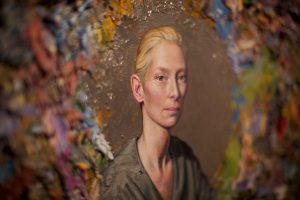 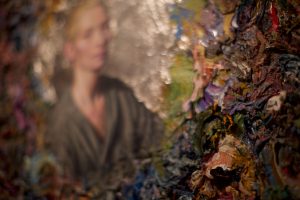 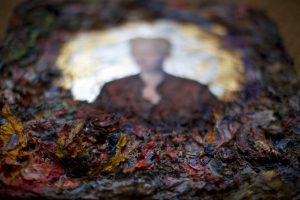 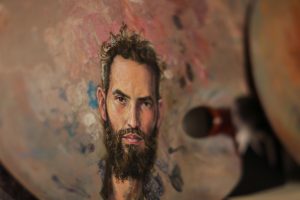 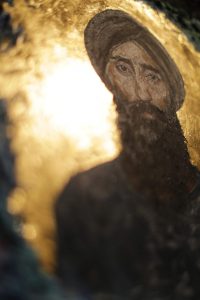 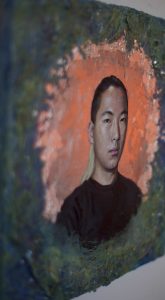 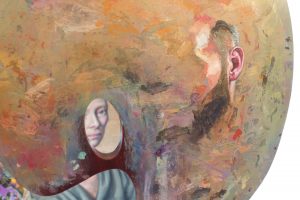 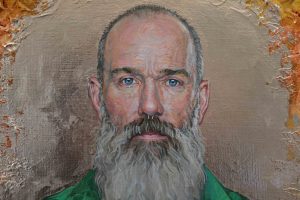 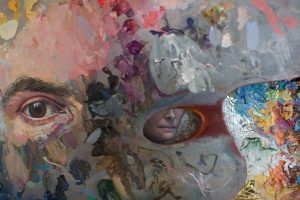 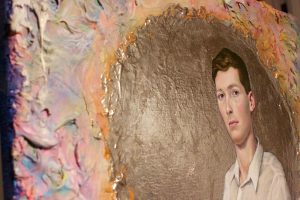