Having already presented his Fall/Winter 2016 men’s collection on the stage of the Opéra de Paris this year, Dries Van Noten returned to the stage once more this week to costume “The Dreamers,” a new ballet by NYCB soloist and Resident Choreographer Justin Peck.

Van Noten began the process of transforming Peck’s visual concept into design by adapting pieces from his collection to suit the demands of choreography. For dancer Sara Mearns, the designer created a bias-cut dress of two different silks, onto which he painted a series of bold, color-block motifs in the style of British abstract artist Patrick Heron. For Mearns’ counterpart, Amar Ramasar, the Van Noten created a billowing gold dress shirt and wide-legged trousers, complete with a red-embroidered harness. The look was translated from Van Noten’s Spring/Summer 2015 men’s collection, which, fittingly, was inspired by Rudolf Nureyev, the Russian-born, American ballet star of the 20th century.

The couturier’s crossover to costumer has been a long time in the making. In 2001, Van Noten designed the costumes for Anne Teresa De Keersmaeker’s contemporary ballet “Rain,” first performed in Brussels and later at the Opéra de Paris in 2011, and in 2015 he collaborated with David Michalek on the dance opera “Hagoromo,” performed at the Brooklyn Academy of Music in New York.

“I am very happy to collaborate with Justin for the first time,” the designer said in a release. “Working with such a talented choreographer allows me to push my design boundaries further and share a passion for creativity with a fellow creator.” 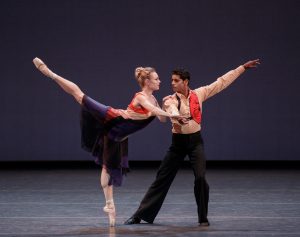 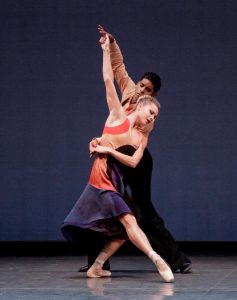 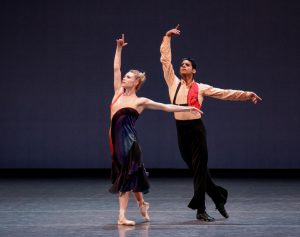