The artist meditates on biased media, state-sanctioned torture, and government censorship in this Document exclusive portfolio from the Fall/Winter 2015 issue.

Since the ’70s, Jenny Holzer has used written language in her art to address the politics of discourse and public space. Like her contemporaries Cindy Sherman and Barbara Kruger of the so-called Pictures Generation, the Ohio-born, Brooklyn-based conceptual artist adopts the tactics of mass marketing in order to subvert it in subtle ways. Placing both personal and found texts on posters, t-shirts, and LED signs, her work explores—to powerful effects—the different ways in which information is produced, controlled, and disseminated.

After the 2003 invasion of Iraq, Holzer started to source material from declassified government documents made available to the public through the Freedom of Information Act. This was partially in response to what she saw as the media’s uncritical support of the “war on terror.” This portfolio, a Document exclusive, includes hand-traced texts that serve as preparatory drawings for larger canvas works from 2015. A hand-drawn map by a detainee, who is trying to demonstrate where and how he was tortured in US custody, is labeled “Jail Cell,” “Interrogation Room,” and “Window that my neck was tied up to.” Many of the documents show traces of subject matter deemed too sensitive for the public eye, with portions redacted by government censors.

Avoiding sensationalist images of war and violence, Holzer’s work from this series invites us to meditate on documentary evidence that offers alternative representations to those found in the mass media. The artist has explained, “As one becomes habituated to things, their intensity is dulled…in the last decades of the 20th century, political rhetoric on all sides became so strident and inflated that obliqueness and artful understatement proved the most effective means of catching the attention of a wary public.” We’re paying attention. 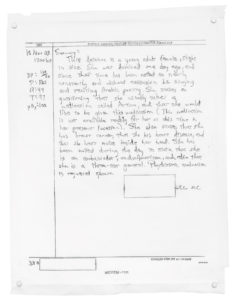 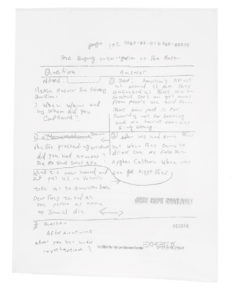 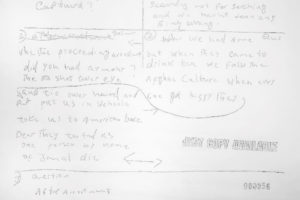 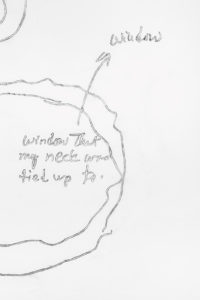 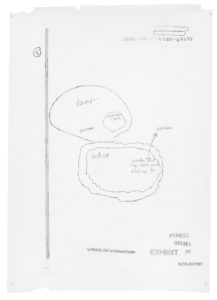