In a drab neighborhood in southern Milan, far behind the Porta Romana train station, peeks something gold. It’s the centerpiece of Fondazione Prada Milano, an experimental art enclave that opened May 9th, 2015, with the help of Dutch architect Rem Koolhaas who has collaborated with Prada for 15 years, designing some of her flagship stores as well as the runway for Prada Men’s Fall Winter 2015 collection. Prada and Koolhaas transformed a 100-year old distillery into a 19,000 square foot space that houses their art collection established in 1993 by Miuccia Prada and Patrizio Bertelli. The collection includes works by artists such as Louise Bourgeois, Robert Gober, Carsten Höller, Tobia Rehberger, and Man Ray. At a time when the European Union’s funds for art have dried up, Fondazione Prada feels like a last minute bailout before the Italian cultural pulse goes flat.

With both a permanent collection and plenty of rooms for experimental exhibits, Fondazione is part Dover Street Market, part Metropolitain Museum, and part MoMA. In other words, an impressive and eclectic mix of art.

With both a permanent collection and plenty of rooms for experimental exhibits, Fondazione is part Dover Street Market, part Metropolitain Museum, and part MoMA. In other words, an impressive and eclectic mix of art. Currently showcased is Serial Classic, an exhibit co-curated by Salvatore Settis and Anna Anguissola. With over 70 roman sculptures borrowed from the Louvre to the Vatican, the exhibit examines the ambiguity of “originality” in art: placing plaster casts next to marble, Roman statues against earlier Greek stone figures. Also among the exhibited works is Thomas Demand’s eerie Grotto and Love Lost by Damien Hirst, a life-size gynecologist’s chair in a water tank complete with colorful fish. Even the cafe is crafted with care—an Americanized Milanese food joint called Bar Luce, full of pin-ball machines and a 50s jukebox, designed of course by Wes Anderson.

The arrangement of the buildings follow a meticulously choreographed sequence, a dramatic arch leads to another warehouse in which Koolhaas has sliced in half and sealed off with a mirrored wall, engendering a subtle vertigo. Constructed out of a variety of materials, even using 4 kilos of 24 karat gold to clad the exterior, the buildings become themselves works of art, providing ever-new frames in which to view the pieces. 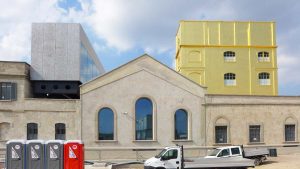 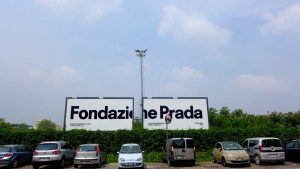 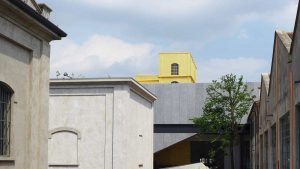 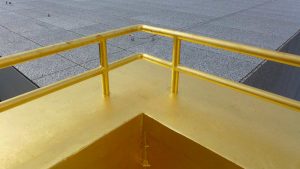 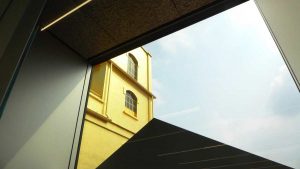 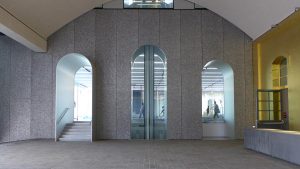 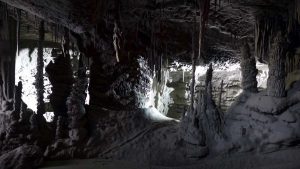 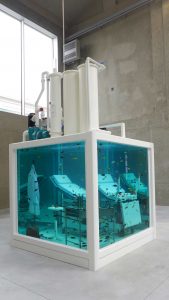 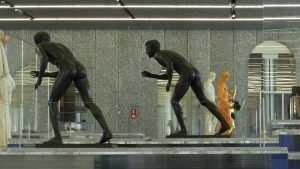 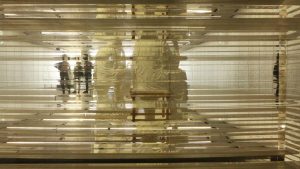