The sound of the train running past was a constant for VORA, on the late-night walks that populated her youth on the outskirts of Los Angeles. She never saw the train, but her memory of it persists, “cranially imprinted in some sort of melancholy arrangement” that reminds her of home. That echoing impression is the basis of VORA’s latest track, “The Train You Always Hear But Never See,” created in collaboration with producer Umbra Abra, who shares the ambient-electronic artist’s capacity for producing haunting soundscapes—and memory of night trains. Hers ran routinely through the night, a passing presence in the North Carolina suburb where she was raised.

Premiering with Document, “The Train You Always Hear But Never See” falls at the center of the 19-track album Portals, featuring solo and collaborative songs from alums of Nicolás Jaar’s OVERTONES, held in collaboration with Other People and Rising Art Foundation last August and September. The Los Angeles-based program nurtures creative exploration by providing emerging electronic musicians with workshops, grants, and stipends that help alleviate obstacles to entry in the saturated genre.

“I would hear this train on nights where I absolutely couldn’t sleep, and it gained this ghostly quality, like a symbol of those deep dark nights in the suburbs.”

“The music industry is way more accessible than it’s ever been,” VORA observes. “These days, anything with a laptop and enough grit can learn music production.” Overtones, by definition, are the layers of frequency that exist above a harmonic sound—the tones we don’t consciously hear, but that always add complexity. Jaar’s program is comprised of artists who embody that same quality: It’s less foregrounded in experience, but plays a major role in shaping the electronic genre’s future. “It’s not to say that the systematic barriers aren’t still in place,” VORA continues. “But I do think that access to information at a young age has really allowed so many people to catapult into a larger music scene.”

These artists’ inventive spirit is definitive of the vanguard of contemporary music, and programs like OVERTONES help propel them to the forefront of their field. Such experiments aren’t always abrasive. “The Train You Always Hear But Never See” is in many ways soft and reflective, but still uneasy, capturing the atmospheric tension of their worlds.

“I would hear this train on nights where I absolutely couldn’t sleep, and it gained this ghostly quality, like a symbol of those deep dark nights in the suburbs,” Umbra Abra muses. “But it also meant that you weren’t alone in that night.” 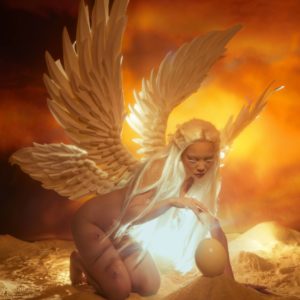 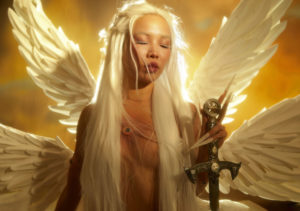