The photographer captures the week’s most exciting presentations from the likes of Fashion East, KNWLS, Nensi Dojaka, Stefan Cooke, Chopova Lowena, and Eftychia

It’s been a whirlwind of a few weeks for the United Kingdom in light of Queen Elizabeth II’s passing. In London, an air of trepidation consumed the metropolis as Fashion Week commenced the morning after Her Majesty’s funeral. Some designers chose to cancel their shows, but many chose not to, instead designing commemorative pieces for the queen. For Document, photographer Peter Lowe hit the scene to capture some of London Fashion Week’s highlights, featuring presentations by Fashion East, KNWLS, Nensi Dojaka, Stefan Cooke, Chopova Lowena, and Eftychia.

For the past two decades, Fashion East has been the source of the industry’s most innovative designers. Its Spring/Summer 2023 collection was held in the stark setting of the Mills Fabrica in King’s Cross, and highlighted the work of three emerging designers: Michael Stewart (better known as Standing Ground), Karoline Vitto, and Jawara Alleyne.

In a simultaneous yet compartmentalized show, Ireland’s own Standing Ground displayed 11 evening dresses made out of jersey material—some color-blocked in muted greens and yellows, embellished by rotund cords that twirled around the models’ bodies like a vine would a tree. The designer stressed the importance of subtle ornamentation in experimenting with the relationship between fabric and flesh. 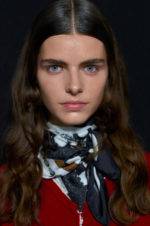 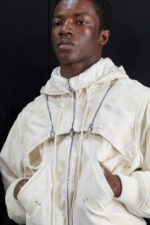 Above Standing Ground’s visual tautology, Brazil’s trailblazing designer, Karoline Vitto, hit the runway. In an effort to challenge antiquated standards of beauty and physique, her brand cast a body-diverse group of models wearing form-fitting jersey dresses, decorated with metallic wiring that slithered in and out of each look. Beside an elegant and mostly monochromatic palette, the acme of it all was a vibrant red gown with strategically-placed cutouts at the neck, hips, and belly, paired with a matching headscarf and mesh gloves.

The show came to a close with Alleyne, which also marked the distinctly authentic designer’s last year of residency at Fashion East. Alleyne materialized a deconstructed aesthetic using upcycled fabrics inspired by his childhood in the Cayman Islands and Jamaica. Guided by nautical imagery, his vision was distinct yet cohesive with the other two designers’; his garments’ metallic elements were not superfluous, but imminent, with safety pins serving as certain outfits’ backbones. Bags and skirts were fringed and distressed; skeleton motifs were ubiquitous.

KNWLS’s 2023 presentation embraced the label’s baseline aesthetic, with an added flair of sustainability. Deadstock fabrics from Nona Source (a platform which repurposes unused fabrics from LVMH houses) made up the plethora of miniskirts, bias-cut slips, washed-out plaids, and acid-washed denim looks that permeated the runway. Amid the daintiness instilled by the fine waffle knit slip dresses and stretched miniskirts with flounced hems, there’s an equally powerful severity in ripe leathers, unruly and exaggerated shearling trims, and inimitable layering.

Nensi Dojaka showed her Spring/Summer 2023 collection in an expansive white space, accentuating her delicate silhouettes made from tiny rouleau strips, asymmetrical suspensions, dainty trimmings, and micro shorts. The show proved Dojaka’s expertise in fabric experimentation, initially inspired by the complex construction and illustrious texture of lace. Among its highlights were the undulating chiffon gowns in beige, black, and maroon with pink detailing.

This season, Stefan Cooke and Jake Burt added womenswear to their Spring/Summer 2023 docket. Together, they created a constellation of textures on the runway: fitted white dresses with taffeta bows, ruffled miniskirts, and multi-seam denim. They cited Victorian aristocracy as a primary inspiration for the collection—specifically, the aesthetic of Holy Roman Emperor Rudolf II, who regularly wore high, stiffened collars much like the one that appeared on their white mini dress, adorned with violet-y blue bows. 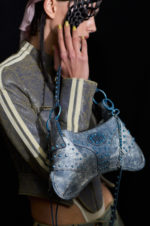 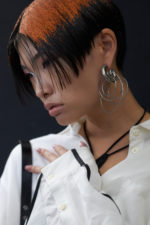 In South London, Emma Chopova and Laura Lowena-Irons infused their eponymous brand with an amalgamation of Bulgarian culture, sport, and folklore. Their collection riffed on the nostalgic, formative years of teenhood, commenting on how sartorial choices would inform the compartmentalization of cliques in a lunchroom: jocks, emos, and cheerleaders, to name a few. That’s not to say that these carefully crafted uniforms were stereotypical by any means. The collection was intensely embellished and subversive: Lacrosse jerseys were remade in vibrant, glittering tinsel; cropped shirts and shoulder bags were adorned with flourishing flowers resembling corsages; and classic white collars were exaggerated on white button-downs.

Eftychia Karamolegkou’s collection demonstrated reductive, minimalist power. Her first look was composed of a perfectly-tailored brown blazer, a white button-down, and high-rise blue jeans. It resembled an archetypal hero, straight out of a film. Karamolegkou followed this staple ensemble with elegant variations: a double-breasted brown suit jacket paired with a matching skirt, translucent knitted tops that were simultaneously stiff and sturdy; and double-slashed bronze dresses (building on last season’s silk cutouts) held together by modest buttons and loops. The tailored jackets were made from lightweight wool mohair and were unlined, making them practical for warmer weather. It was the apex of functional and simple, yet original and elegant design. 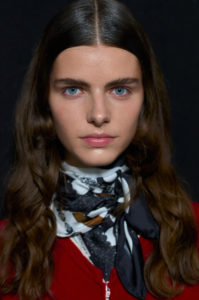 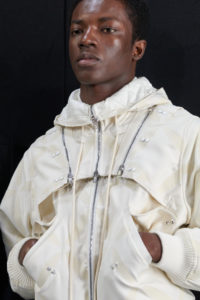 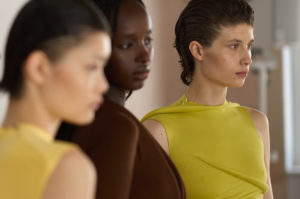 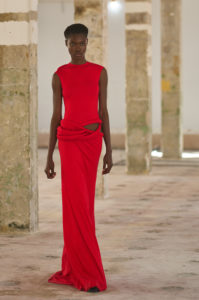 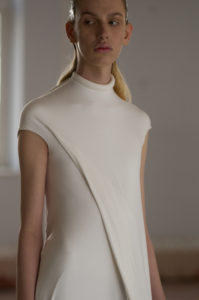 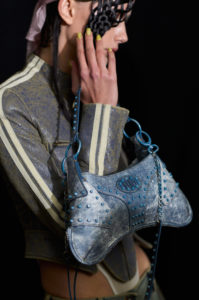 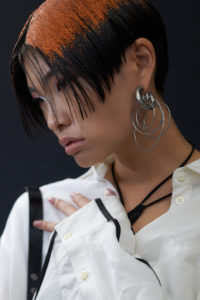 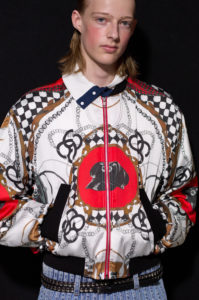 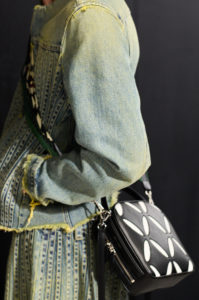 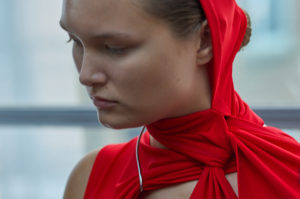 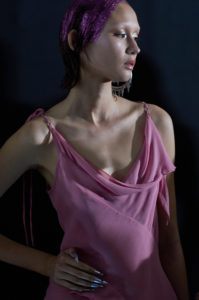 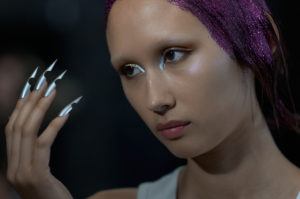 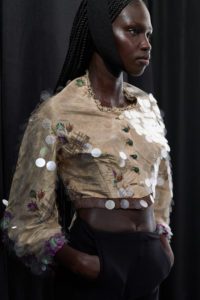 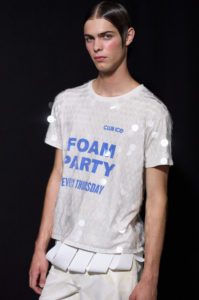 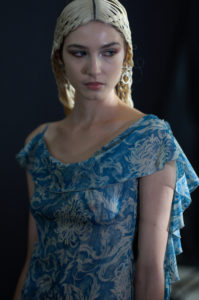 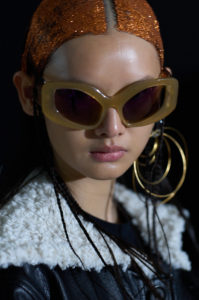