While attending CalArts for both her BFA and MFA in the mid-aughts, artist Kaari Upson became obsessed with a mysterious playboy neighbor of her parents, who she called Larry. She somehow acquired a significant amount of his belongings—either by finding them or stealing them, according to various accounts—and turned them into a body of artwork, including paintings, videos, and sculptures. Although she never met him, Upson acted as a voyeur, investigating his psyche through her work, which would become known as The Larry Project (2007–2012). Sadly, the Los Angeles-based artist passed away last year, at 51, after a nine-year battle with breast cancer, leaving behind a teenage daughter.

The beloved artist’s legacy still lives on, thanks to several exhibitions. Upson’s work is currently featured in the Arsenale at the Venice Biennale through November 27, in a group show called Shifting the Silence at SFMOMA until September 5, and in an exhibition of new works at Sprüth Magers’s Los Angeles location until October 8. Document had the chance to visit her retrospective, Kaari Upson: Never Enough, which is on view at the DESTE Foundation outside of Athens until October 27.

I had the pleasure of meeting Upson in her massive Koreatown studio in the winter of 2016. Amusing, irreverent, open, kind, and undeniably cool, she was about to be one of the artists to open Hauser & Wirth’s Los Angeles location with a female group show, and Document featured four of the artists from the exhibition in a portfolio of exclusive works. Upson was an easy and approachable conversationalist. She showed me the various parts of her studio, which was filled with random things, from old couches to mattresses to dummies and empty aluminum cans. I instantly felt a rapport, told her I was thinking about moving to Los Angeles, and I could tell we would be friends if I ever actually relocated. But I never did.

Every time I ran across Upson’s work, as I did at the Massimo De Carlo stand at Frieze New York 2021, I recalled the one and only time I encountered her in real life, during that studio visit. It would not be until her exhibition opened at the DESTE (the Greek word for “look,” as well as an acronym for International and Greek Contemporary Art) Foundation in Athens in June 2022, that I would have the opportunity to see a retrospective of her work, spanning her brief, 15-year career from 2007—the year she completed her MFA at CalArts—to 2021, the year that she succumbed to breast cancer.

Cypriot industrialist, art collector, and Upson’s close friend Dakis Joannou curated Never Enough. He was introduced to Upson by Maurizio Cattelan, and the two maintained a friendship until her death. 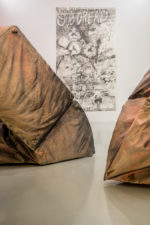 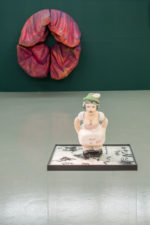 Never Enough takes its title from It’s Never Enough, a 2007 photograph of Upson breastfeeding the Larry doll she created. In it, she gives breast milk to Larry as if she’s giving life to The Larry Project, as well as to “Larry” himself—the persona that she invented, partially from the objects the actual Larry left behind, and partially from her own imagination. In the first room, a row of crutches forms the 2012 installation Cult Of Invalidism, a nod to the artist’s experience fighting breast cancer. In the left corner is a diptych composed of two 2008 oil paintings. (Upson is a classically-trained painter.) Untitled (Kiss), appears to be a fusion of a male and female face. Aluminum casts of aluminum cans, another constant in Upson’s oeuvre, comment on the notion of consumption as they surround two sculptures of human figures. False Foot (Dakis Left, Donkey Right) (2021) is a cheeky tribute to her patron Joannou, and one of the final works she made before her death.

The next room explores Upson’s fascination with mattresses, most cast in silicone as they border Two Hers, a 2017 sculpture of two figures lying atop one another dressed in an outfit Upson wore in a 2016 video. The mattresses symbolize her relationship with death, in particular, the 2015 Death Bed, in which she used silicone, nylon, and fiberglass to create a cast that she colored black, coating it with an iridescent sheen to illuminate the experience of reckoning with death.

In the final room stands Clay Baby, a cheeky ceramic figure of a woman lifting up her skirt to expose her butt cheeks. The video MMDP (Quartet) / Pepsi Chair reunites viewers with the outfit the Two Hers wear, only this time, it’s Upson in the plaid shirt and denim ensemble as she sits on a chair made of Pepsi cartons at a Costco. A few large-scale graphite drawings line the walls, illustrating the complexities of her mind through things like her imaginary relationship with Costco, sketches of piles of Pepsi cases, and phrases like “Orgasmic Infinity.” Finally, stands Left Brace Erase, Back Brace Face, the 2016 sculpture of two deformed couches that she showed at Hauser & Wirth Los Angeles’s inaugural exhibition that year.

That sculpture was part of the reason I met with Upson, whose task was to create an original work to be featured in Document. The result was two scarecrows that she initially made to scare away vagrant would-be thieves from her K-Town studio. “They steal crazy things,” Upson told me over the phone back in 2016. “They stole my neighbor’s tarp. Everything is just being shifted. It’s called creeping.”

Upson’s work was inextricably intertwined with her real-life persona. Her mind, like her oeuvre, was vast, layered, and complex. She worked within many different mediums, using both the mundane and unexpected as inspiration within her work. Those who encounter her art are left to wonder where the distinction between reality and Upson’s imagination resided, but she probably wanted it that way—to both amuse us and to make us think. 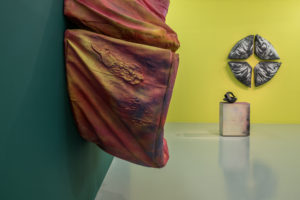 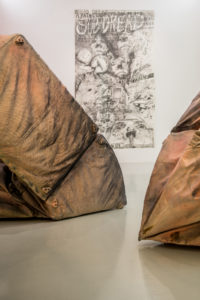 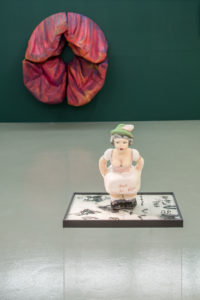 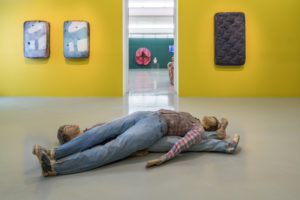