The stylistic evolution of Elisa Sue Young Park has thus far been somewhat unpredictable, yet always executed with immaculate taste. When I first met Park in the late 2010s, she was a Renaissance woman in the metaphorical sense, proven through her pursuits of science, advocacy, music, and art. But also in the literal sense, in the way that she dressed—delicately detailed garments and tightly bound corsets, sometimes accented by a lipstick that filled only the middle of her lips, with two dramatically painted ridges. Her steady evolution into e-girl subculture felt neither inauthentic or unnatural, as she carried the same sensibilities in her excruciating attention to detail, relentless fascination with history, and godly level of taste. The only real change that came of this aesthetic expansion was that it was no longer just me drooling over her—it was (what felt like) the whole internet.

The whole internet, and Ava Nirui—art director behind Heaven, Marc Jacobs’s subversive sister brand rooted in nostalgic subcultures that’s branded itself with campaigns starring artists like PinkPantheress and beabadoobee. Nirui has commissioned Park to create zines for Heaven, the second of which, Just Like Heaven, premieres today. Supplemented with musings on fashion with Christina Ricci and a conversation about horse dicks, among other things, with Harley Weir, the zine documents Park’s anti-heroines styled in big hair, dramatic makeup, and the not kitschy, but mismatched layering that has been re-popularized by today’s youth.

Park joined me to discuss the making of Just Like Heaven, the allure of the anti-hero, and the ways in which activism feeds art.

Megan Hullander: Your aesthetic inspirations are fairly clear—’90s nostalgia and grunge, East Asian fashion subcultures, and, obviously, Heaven. But where do you see your ideological inspirations coming from? Do they feed from the same subcultures you pull from aesthetically?

Elisa Sue Young Park: I think I pull inspiration more so from areas outside of fashion, music, or even art in general. My decision to follow a career path outside of photography has provided me with this unique opportunity to channel my work into my art, and my art into my work. I am currently legal assisting for civil rights lawyers in Koreatown, and working for a Korean American youth nonprofit organization. I’ve been introduced to a space filled with really cool organizers, super ambitious students, and attorneys who are fighting for the rights of systematically disadvantaged communities. This atmosphere has really instilled in me a sense of community and purpose that I strive to manifest in my art on an ideological level. It feels surreal to have my art attract young minority students, who are often artists themselves. They’re attracted to my organizing work that in turn gets them involved in the youth programs I work for. It’s this cool cycle of art triggering community action.

Megan: How do you see that approach manifesting in this zine?

Elisa: Casting wise, I wanted to pull from a diverse range of people, I wanted to make sure my casting represented the type of person in the type of world that I want to create. I think I’m often inspired by the subjects that I’m shooting. 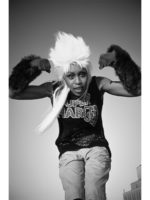 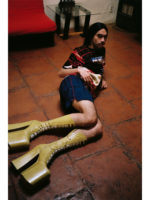 Megan: How did you go about finding people for this iteration of the zine?

Elisa: My close collaborator for the project, Jester [Bulnes], and I did a lot of the casting together. A lot of it was just casting people in our own communities and our own spaces. [We wanted] people who embody the essence of Heaven with a sense of individuality.

Megan: And you interviewed Harley Weir and Christian Ricci—how did they each fit into that world?

Elisa: Harley is just such a visionary. I especially like that she views photography as a collaborative process between her and her subjects. Despite her personal creative brilliance, she still regards her art as an inherently collaborative act—which I think can be hard for a lot of artists to admit or accept, because it’s normal to feel possessive over the art you create. That notion applies to both my own creative approach and the collaborative intention of Heaven as a brand.

And for Christina, it was a lot of fun to hear firsthand her anecdotes from her extensive history in fashion and film. The self-portraits that I shoot undoubtedly pull inspiration from the likenesses of characters like Wednesday Addams. For this project, I strove to encompass that anti-hero quality that Christina has so famously portrayed. I like the idea of each subject personifying the unconventional allure and angst that is characterized by an anti-heroine like Wednesday.

Megan: The images of Grey on the ladder are very superhero-esque.

Elisa: I was thinking that, too. And I was like, Wow, that actually makes a lot of sense for the body of work as a whole.

Megan: There’s an image with a cross in the first zine, and then the symbol reappears as a collage in this one—was that intentional? I feel the religious iconography almost further feeds into the appropriation of heroes.

Elisa: The cross behind Jester for that image was to pay homage to that season’s collaboration with Sofia Coppola. The film explores interrelated themes of religion and isolation within womanhood, so I wanted to kind of extend those very relevant motifs to a wider demographic, by photographing someone who’s gender non-conforming and queer. As for the second cross—the collage that appears in the second zine—that was actually a part of Jester’s own artistic contribution. Perhaps it was a nod to their pants in the last project, but I know they utilize religious iconography in their own work in general. 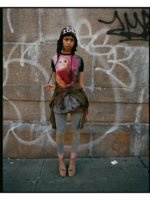 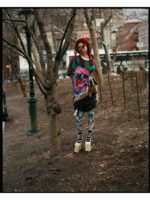 Megan: I feel like the settings generally are a lot more city-oriented than they were in the last one.

Elisa: Aesthetically, I tend to prefer shooting outdoors with natural lighting. There are only so many places you can rent out for shooting indoors, so I feel like when you shoot outdoors, it’s sort of limitless.

Megan: I can’t help but go back to the anti-hero motif, and city settings feel like classic grounds for that. 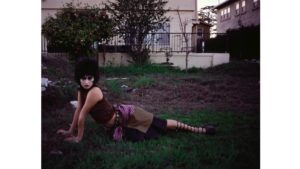 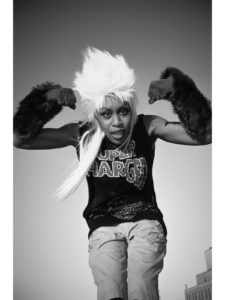 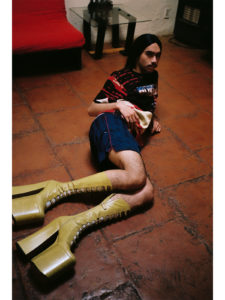 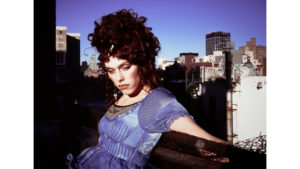 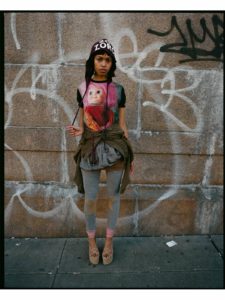 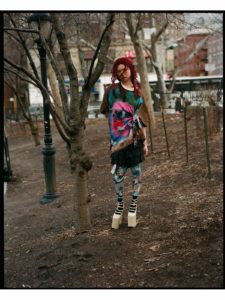