“The collection de- and reconstructs the iconography of Kenzō Takada,” states a press release, “through a uniquely Japanese view of Paris shared by the founder and his heir.” Archival motifs and garments were tied into the show, as Nigo refined and expanded his youthful universe. 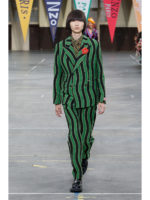 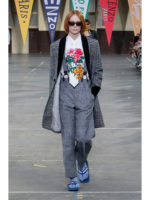 The Kenzo name was spelled out with alphabet blocks, and printed onto duffle bags. Graphic characters were embroidered onto varsity jackets and sweater vests. Many of the looks were accessorized with multicolored, slouchy beret visors. The label continued to elevate the maritime uniform with crisp collars paired with playful wool vests, and pinstripes were incorporated into workwear suits. Staple prints from previous seasons were reimagined, such as the Wavy Stripe, Pixel Rose Camo, and Hana Leopard. 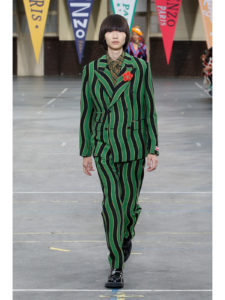 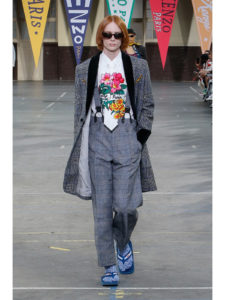