The iconic trend was disruptive and seductive, bestowing communities with power from Harlem to LA

The zoot suit was born in the bustling streets of Harlem in the 1930s. On a given night in the neighborhood, one might spot Duke Ellington playing at the Cotton Club, or swing dance till sunrise at the legendary Savoy Ballroom, home to the Lindy Hop. Black musicians introduced the flamboyant zoot suits—distinguished by their oversized jackets, outlandishly broad shoulder pads, and balloon trousers—to those sultry jazz clubs that swept across Upper Manhattan in the height of the Harlem Renaissance. The garments dripped the immeasurable cool of jazz itself. One could say it’s precisely this smooth presentation that powered musical greats like Cab Calloway, Dizzy Gillespie, and others through their successes, despite an unforgiving Jim Crow America.

Art historian Robert Farris Thompson terms this cursive mode of moving through space “an aesthetic of the cool.” In his canonical essay of the same name, he suggests that among Afro-diasporic peoples, this cadence demonstrates “the value of composure in the individual context, [and] social stability in the context of the group.” Coolness, therefore, can be worn as armor: It cushions social repression like protective wear intercepts physical harm.

These staged performances of control, of constructed autonomy by Black Americans, were regarded with troubling, albeit anticipated, alarm from white civilians. As the suits surged in popularity among Black communities in New York and beyond, they were perceived as visual markers of gang activity and deception. Spike Lee expertly captures how the suits evolved into contentious symbols of civic disobedience in his 1992 biopic, Malcolm X. In the film, one watches as the handsome zoot suits worn by Malcolm X and his conspirators cloak clever machinations, often involving larceny, which led to the revolutionary activist’s nine-year imprisonment in 1946.

“For all its superficiality, coolness, still, is an insidious weapon: It threatens dominant culture and provokes nonconformity across identitarian spectrums.”

The zoot suit continued to embody dissent as the fashion trend spread across working-class communities at large. In the midst of World War II, the superfluous garments defied wartime cloth rations as the suits required copious amounts of fabric to produce. In 1942, they were prohibited for the duration of the war and those who still wore them were deemed treasonous.

Consequently, in Los Angeles, when Mexican-American men called pachucos adopted the zoot suit, they were subject to violent, racist attacks. These attacks reached their climax in 1943 during the Zoot Suit Riots, when white American servicemen and civilians stripped and beat mostly Latino men for wearing the suits. In Luis Valdez’s 1979 Broadway musical Zoot Suit, and in his 1981 titular musical film that followed, the director and playwright transports us to the heart of the Chicano community in Los Angeles. Here, we see the pachucos, decked in brilliant pastel garb, meet brutal assault with intrepid resistance as they defend their cultural expression through dress.

Pachucas—the Chicana women who layered the idiosyncratic, billowing blazers over fishnets and kitten heels—were likewise targets of harassment while serving as agents of protest. These women are the protagonists of Troy Montes-Michie’s solo show, Dishwater Holds No Images, an exhibition which sees the multidisciplinary artist render zoot suits onto white models from 1970s ads, darkening their skin and browning their lips to reflect the pachucas. The figures are often housed in fragmented collages that join expressive drawing and sharp threading on canvas and magazine paper. The pachuca figures assertively overlook sculptural works made from freshly pressed shirts, hangers, and clothing racks—becoming coded signifiers of domesticity. 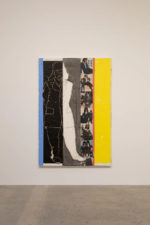 In this respect, the gallery itself feels busy at work. In Was the Beautiful Woman in the Mirror of the Water You or Me? (2022), Michie stitches the pachuca renderings together amidst variegated textiles, zippers, and hangers to form one elongated canvas that recalls a factory assembly line. Collectively, in this studied exhibition, the artist juxtaposes the labor that tends to fall on women with dignified portraits of pachucas. In doing so, one surveys a bifurcated history of pachuca societal defiance: Refashioning the traditionally male zoot suit, Mexican-American women disrupted patriarchal convention as they refused a white supremacist campaign that criminalized their dress.

The zoot suit, however, did not always denote counter-nationalist protest. In fact, some racial minorities wore the suits to assimilate into American culture. In their 2019 site-specific installation Pigeonhole, on view at the University of Georgia’s Dodd Galleries and the Knockdown Center, artists Priyanka Dasgupta and Chad Marshall composed an archive of the life of Bengali peddler and sailor Bahauddin “Bobby” Alam. This fictional character, grounded in Bengali diasporic histories in the United States, migrated to America in the early 20th century and masqueraded as a Black jazz musician in order to bypass the Asiatic Barred Zone Act of 1917. The installation takes us into Alam’s imagined dressing room. Here, among a flurry of show posters and distended suitcases, lies the dashing zoot suit that enabled him to traverse a xenophobic barrier and pass as a Black American.

In a culture where there are infinite systems in place to privilege a select race, gender, and class, it’s clear that one’s social presentation holds incalculable consequences. So, let’s return to coolness—that seductive mode of composure that entices as much as it disrupts. For all its superficiality, coolness, still, is an insidious weapon: It threatens dominant culture and provokes nonconformity across identitarian spectrums. We see this among the diverse dissenting bodies that wore extravagant zoot suits in the 20th century, despite their illegality. Looking back, the slinky apparel, and those who modeled it, endangered those same white and wealthy paradigms that continue to cling to contemporary culture today. 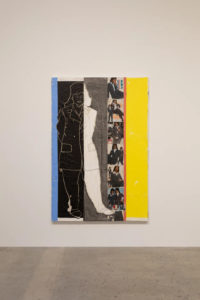