In her exhibit, the Plastic Bag Store, plastic is more than a byproduct, it’s the main feature of the modern consumer experience

The Plastic Bag Store, an immersive art installation and film by Brooklyn-based artist Robin Frohardt, interrogates and exaggerates the extremity of our plastic use by representing it as not just a byproduct, but as the main feature of the modern consumer experience.

After we experience the store, Frohardt plunges us deeper into the consequences of our consumerist culture as the muzak fades and she gets on the loudspeaker to announce, “Attention most valued customers, the show will begin in five minutes.”

Soon, a team of plastic bag “employees” emerge and start haphazardly sliding cardboard boxes into the center of the store before pushing shelves away on wheels to reveal a projector screen behind what was once the snack section. We’re told to sit on the boxes and watch Act One of a three-part film. Told mostly through puppetry, the story begins in an ancient civilization that constructs single-use vases for water until they realize how wasteful it is. From there, we’re told to shift our boxes to the left, so we can watch part two on a screen made from a stack of cardboard boxes. Here, we see a more modern society, where a curious janitor working at a museum displaying the ancient vases realizes we ignored the past civilizations’ trial and error, evolving their idea of single-use vases into single-use plastics. She feels compelled to pen a warning message for the future, which she stuffs into a plastic bottle and throws away.

The message, while erased through time, is later discovered by a curious explorer in a dystopian ice age in the “far-off future,” who understands the plastic bottle is an artifact from a time long before his, but mistakes it as a feat of human creativity, rather than a relic of our throwaway lifestyle. He finds more, mistaking a plastic fountain soda lid for a mysterious compass, and is so compelled by his findings that he returns to the site of discovery to continue fishing plastics from under an arctic sheet. Soon he has enough to display in a museum of the ancient “customers,” which we soon enter before ending up back in the plastic bag store, where we’re told we’re not in the present, but rather a simulation of this consumerist age. We’re invited to leave and observe what now seems like an even more ridiculous culture where materials made to last forever are used to package and distribute products meant to be thrown away.

The impact hits suddenly. As I reenter sunny Austin, where The Plastic Bag Store opened in April after debuting in New York in October 2020, I notice every miniscule plastic item in my car and at home, and when I return to my part-time job at a grocery store, I can’t help but tweak each time a customer forgoes their hands and asks for plastic bag to carry their kombuchas and Yerba Mates to the car. Later, I connect with Frohardt over Zoom, curious to learn what compelled an artist who began her career as a theater and film director to use plastic and puppetry as mediums to present a dire warning.

Jeremy Steinberger: I thought your exhibit was incredible, because it positions plastic as a product as opposed to just a byproduct of consumerism and capitalism. We’re meant to go to this store and, instead of buying anything, just observe plastic in this form—as a product in and of itself, completely antithetical to the way plastic is marketed otherwise, as this temporary material made for our convenience. What impact did you hope this might have on us as consumers?

Robin Frohardt: When you walk into the plastic bag store, it feels very much like a regular grocery store. It has that familiar feeling to people. But then the next time you’re in a grocery store [after seeing the exhibit], it might feel like the plastic bag store. Plastic is really designed to be invisible and to move in and out of our lives kind of undetected, you know?

We only really interact with these things for a second. I really liked the idea of saving them and collecting them and having them all in one place and making them hypervisible. The irony is, I now have some plastic bags that I’ve had for like eight years, and I’ll probably keep having them.

Jeremy: Talk a little bit about what led you into this curiosity over plastic, particularly plastic usually found in the grocery store?

I was just like, ‘This is so stupid.’ I could maybe turn this up to 11, you know, and sort of highlight the ridiculousness. I thought it was a funny idea to have a store that just had packaging. It was just a packaging store, because that’s kind of what a regular store feels like sometimes.

Jeremy: So you have this idea, and you just started collecting plastic and making faux food items out of it. What was that process like?

Robin: There was a learning curve, for sure. Because at first, I was like, ‘Oh, okay, I have to make a grocery store.’ I just started to ask people to save the plastic that they were going to throw away or recycle and come get it.

I just became overwhelmed with how much plastic there was, and how many different kinds, and sorting it and cleaning it and keeping it in my studio. I sort of realized that I needed to hone this. I needed to pick a few kinds of items to save. So I asked people to save things that they used multiples of, like if you buy the same orange juice every couple of days or whatever, so I could start to create a realistic inventory for a store.

I also collected stuff just off the street. Where my studio is in Brooklyn, there’s a plastic and canned recycling place. People collect cans out of the trash, then sell bags to this place. I have worked with those bottle collectors before to help me get, like, all the water bottles and stuff.

Jeremy: Would you say the goal of the exhibit is to get people to think about plastic use on an individual or systemic level? Or both?

Robin: I’m definitely thinking more on a systemic level. The individual stuff is complicated, because it’s going to take systemic change. It has to be, because this is something that I care deeply about, obviously, and even I can’t live plastic-free. There are people who are entirely plastic-free, and they have blogs about it and they give talks about it. It gets very hard to do that in your everyday life—it’s something that’s not available to everyone. The plastic option is often the cheaper option.

There’s a barrier to entry to all of these fancy, reusable products. So I’m not interested in just shaming people for their consumption. I also think that that’s just not a really great way to reach people, you know? It’s really on the manufacturers to stop making it. Turn the faucet off.

But that isn’t going to happen until there’s a big cultural shift, too, and a big understanding of the issues. So I think, you know, every little project or piece of legislation or local ban—it’s going to take all of those things before culturally we understand that this is a problem.

“Try to look at our own, look at ourselves, like anthropologists, I think it kind of helps us realize that some of the things we’re doing aren’t necessarily inevitable, or just the way we are. This is really specific to our time.”

Jeremy: It seemed like the film deeply affected both little kids and adults. I think people are starting to realize that, with climate change, humor and satire can go a long way in getting the message across. I mean, say what you want about that film, Don’t Look Up, but I do think it was effective in that sense. What made you want to use humor and satire to approach such an existential topic?

Robin: Humor is how I cope with all of the things that bother me. Humor is a coping mechanism for me and a defense mechanism. And so this is part of me processing my own feelings about these things that can feel overwhelming.

Nobody wants to just hear a bunch of statistics, because often the numbers are so big, it’s like we can’t even really wrap our heads around them. Like, what’s the difference between 5 million and 5 billion tons of plastic? Numbers don’t really have an impact, but we are people and we relate to people. So watching a story where it’s one plastic bag’s journey, I feel like people can really connect to that.

And I also think that you want to engage and explore and find more things that are funny in the store, more so than if you just came in here and it was like, terrible pictures of sea life suffering. People want to look away, or they don’t want to feel bad. I don’t want to make people feel so bad and guilty that they just turn off. We’re all in it together, and hopefully we can laugh at ourselves so there’s a little bit more air in the room to actually make some changes.

Jeremy: I’m wondering how this process changed your relationship to plastic and what you hope the takeaway message is?

Robin: Well, to answer the first part, it’s been kind of a roller coaster. I definitely think about it a lot, obviously. I’m thinking about my plastic consumption, but I’m also thinking about it as someone who is collecting plastic and looking for certain things that are harder to find.

Like all the veggies at the store are made out of specific colors. So I sort of like seeing unique colors in the wild or whatever. And I’m like, ‘ooh, that’s a good one. Where did you get that?’ I hate it, but I’m also attracted to it in some way because I need it for work. So, yeah, that is definitely a weird dichotomy.

Growing up in this really consumerist culture, and everything being kind of mass-produced, just made me feel like our time wasn’t very special or something like that. You kind of look at things that are in a museum and you’re like, ‘Oh, these were like the great people of the ancient past, and they’re amazing civilizations.’ Everything in our time just feels really cheap and disposable, and we’re really consumerist, so it’s like we don’t feel part of the lineage of human history. Or that what we do only exists temporarily because it’s disposable, but it is actually very permanent.

It’s funny to try to look at our time from the future and realize it’s all going to stay, and we will be in a history museum. Everything that’s in our reality is specific to our reality. This isn’t how it always has been. It isn’t how it always will be, this is just who we are right now. And to try to look at our own, look at ourselves, like anthropologists, I think it kind of helps us realize that some of the things we’re doing aren’t necessarily inevitable, or just the way we are. This is really specific to our time. 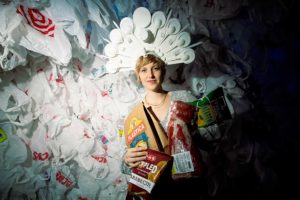 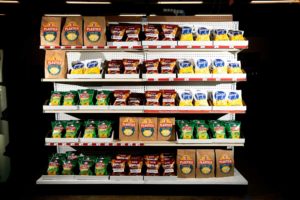