“I lovingly refer to the city as my hellscape… Every time you visit, you can have a totally different Hell.” Martine Syms is describing the installation she created for Prada Mode, the brand’s traveling social club that had its seventh iteration at Frieze Los Angeles last week with two days of music, food, and conversation at Fairfax’s iconic Genghis Cohen restaurant. The title of her installation is pronounced Hell-aye, not Hella, Syms reminds the crowd of curators, press, and VIP guests enjoying champagne and Crackerjack Shrimp during an idyllic LA sunset.

Syms created HelLA World around the social life of a party. Guests were invited to DM the artist bits of anonymous gossip that were translated into text banners that played on screens, spliced with lyrics from a raw club recording made by Sam Cooke in 1963, while photos previously used in a different format for an exhibition at Bridget Donahue Gallery were redisplayed in the corridor leading to Genghis Cohen’s dining room. The combination of text and image creates a shorthand that aimed to give Syms’s audience a direct experience of a party’s social life in the fourth dimension: time. Purple, the color of the installation itself, and a recurring motif in Syms’s work, is a reference to Alice Walker’s The Color Purple that creates a sense of transcending the false perception of separateness—a theme Syms also finds in the work and the spiritual practice (Buddhism) of bell hooks.

“God, source, spirit—I like to use purple as an indicator of some kind of space between secular and sacred,” Syms said in conversation with Sarah Lewis, professor of art history and African and African-American studies at Harvard, on the second night of Prada Mode. “When I started using it initially, I was thinking a lot about the cinematic or digital space as having a techno-shamanism—having some kind of spirit in the machine. Like, intimacy with my computer.” The previous night had included a talk on LA cinema and contemporary art that Syms hosted with Hammer Museum curator Erin Christovale, the artist and poet Diamond Stingily, and the director and filmmaker Garrett Bradley.

Before guests swarmed Genghis Cohen’s music and dining rooms for a second night of partying, featuring a live performance by Sudan Archives, we grabbed a few minutes with Martine Syms to discuss growing up in LA’s all-ages punk and DIY scene, the ethos of continuity and community that informs her studio practice, and why she probably won’t be selling NFTs anytime soon.

Hannah Ongley: What was your initial idea for the installation at Prada Mode?

Martine Syms: The initial idea was I wanted to do a party here, during Frieze. Before I even talked to Prada, I was just personally like, ‘Oh, I want to do a party during Frieze here [at Genghis Cohen] because I did one the last Frieze. Coincidentally, the very next day, Prada reached out to me about doing this project and was like, ‘Is there any place in LA you would want to do something that would be like a two-day club,’ and I was like, ‘Yeah. Genghis Cohen.’ Once we were able to confirm that we could do it here, I was just thinking about some of the nights I’d had here, and wanted to use that as a way of structuring this kind of text piece that would be loosely a narration of the evening.

Hannah: What was Genghis Cohen to you when you were younger?

Martine: For one, it’s just a real locals’ [spot] that’s been here forever, 30 years or something like that. It’s a really big spot for Sunday dinner because it’s kosher Chinese food and Fairfax is an Orthodox neighborhood. Christmas is a big thing here. A lot of friends of mine, their families would come here, so when I moved back to LA for the first time, me and a group of friends would always have Sunday dinners here. Myles Hendrik, the DJ and photographer, he used to throw a party here that I would go to a lot. And, yeah, it’s just a place I really like. 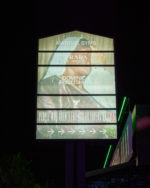 Hannah: You were talking about how LA is like various types of Hell, but it sounds like yours was pretty good, actually. What was your scene here like when you were growing up?

Martine: When I was younger? A lot of punk shows, a lot of noise shows, a lot of stuff around music and films. I homeschooled when I was in high school, so I pretty much just went to shows all the time, like, every night, then I went to go see the movies. There used to be New Beverly, which Quentin Tarantino has bought now, there would be repertory films, like, double features. You could see any type of movie. I loved that range, and I feel like that was so influential to me. Also, my siblings, each of us was into really different music. My brothers were into hip-hop, my older brother was really into techno, then I was really into punk stuff. My parents were really into going to comedy clubs and soul records and all this stuff, so I like the ability to have really different experiences in LA. Music, films, going to see live stuff was a big part of my growing up here.

Hannah: You used to work at Echo Park Film Center as well as Ooga Booga bookstore and The Smell. Were there particular films you saw that had a lasting impact on your work? You mentioned The Color Purple earlier, from your childhood.

Martine: The Color Purple was a big one. The Real World [laughs]. When I was in college, at art school, all my work was about The Real World. I totally get it, I see all the things I was thinking about in terms of archetypes, in terms of narrative being a part of social structure, power dynamics, how people planned these things—all the social material. I see all that in The Real World. Also representation, reality, consciousness, modes of address, surveillance, all those kind of initial themes, I can look back at that work and be like, ‘Oh yeah, I see what you were drawn to.’

Hannah: So it was a conscious decision to incorporate all that into your work?

Martine: It was, but it evolved. That was just back in college. I’m not doing it now, but it was to speak to all those things, then it expanded from there. But I think that was just a big influence. I don’t know, there are so many movies, honestly. I was really into Wong Kar-wai films, Ximena Cuevas, Black Audio Film Collective. This Raúl Ruiz piece I saw when I was in high school—I was like, ‘This is crazy.’ Paprika, the Satoshi Kon movie. I watched a lot of anime as well. Hollywood Shuffle, that was a film that was very important to me.

Hannah: You were also talking about how you lean towards the collective and continuity over firsts and seconds. How does that relate to your self-description as a ‘conceptual entrepreneur’?

You think of an entrepreneur as an Elon Musk type of—

Martine: Yeah, as starting something. I think when I used that initially, I was, like, 19, and I was thinking about that. I was really thinking about this Sol LeWitt quote about conceptual art where he sort of defines what a conceptual artist is. He says, ‘The machine becomes the thing that makes the art.’ You create a constraint, and that constraint produces the artwork. I was kind of interested in a business doing that, because I was running this shop—that was what I was doing immediately after school. I had a studio practice but that was really a passion of mine, to do the space. I was trying to contextualize it, so I was like, ‘Okay, this becomes the machine that makes the art, the value, this project becomes this kind of generative space.’

Hannah: You were talking about multimedia in terms of spaces between the secular and the sacred. Is there an element of the sacred to most of your work? Do you consider yourself a religious or spiritual person?

Martine: Maybe when I think of the sacred I think of the sublime, which is something I’m really interested in—transcendence. That’s part of what I mean about continuity. I think that the separateness is like a perception. A lot of film, coming from when I was studying it—I thought a lot about media studies and that the idea that we’re separate is a kind of perceptive construct, and so is the image. This is very heady but I’m just going to say it [laughs].

Martine: It was more just, to me, I’m interested in how we frame reality. How different frameworks are structuring your idea of reality. A thing I think about with audio sound, as well as image, is that maybe there’s a way to have a direct experience in a different dimension, because the fourth dimension is time and I really think about my medium as being time. How can I give somebody a direct experience with that which perhaps could expand their sense of reality?

Hannah: Were there any thinkers or philosophers who inspired you to explore those ideas?

“I’m interested in how we frame reality. How different frameworks are structuring your idea of reality.”

Martine: One would be Giorgio Agamben. He has this essay called ‘Notes on Gesture,’ which I referenced for a video I did. That’s sort of about how [through] modernity, migration to cities and away from our kin, family, familiar networks, we lost our movement or embodiment and we put it into cinema. That’s why cinema is sort of a space for politics, because it’s all about movement.

Hannah: Talk about the parody and satire element of your work. Do you consider that a foundation of your work, or is it more something that you feel is necessary to incorporate into it?

Martine: I think it’s a foundation of my worldview. I just have a wicked sense of humor, I suppose, that’s always at play, and it’s very playful. There’s always a kind of deadpan even visually, though—I think about it a lot. I also think it’s a mode of communication that I find really beautiful, like a joke—it’s hard to tell a joke. It’s actually very difficult. There are a lot of things about humor that I find relate to art, like ‘incongruity’—that’s part of what makes something funny. Or scale, or a double meaning—all those are things that I think about in my artwork. It’s kind of both.

Hannah: I don’t know if you’ve managed to check out much else at the fair. I was going to ask how you feel about the Web3 direction of a lot of art now.

Martine: When I graduated, there was a lot of talk about this thing, ‘dual sites.’ I was sort of part of a wave of ‘internet art’ [laughs]—still am, in a way.

Hannah: That was big in LA, wasn’t it? With Petra Cortright… I think you and I are the same age.

Martine: Yeah. It was kind of big in the school I went to in Chicago, too, there were a lot of people experimenting with what that meant, so a bit of it now feels a bit old hat to me. But I’m curious about what it will become. I feel like there’s a much different way of thinking about it now that hasn’t been institutionalized yet, but it wouldn’t be [laughs]. These ideas that all these young people were having in 2007, it’s like a new wave of that. 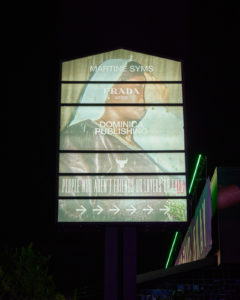 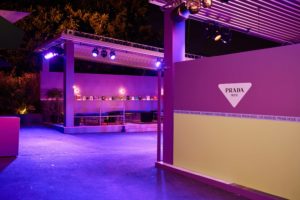