Lizzy McAlpine is a girl you know: the girl next door, someone to gossip with for hours, or to trust with the aux cord. Her welcoming smile and bashful giggle almost make me forget she’s the same girl who receives over 3 million monthly listens on Spotify. The Philadelphia native, like most up-and-coming musicians today, gained popularity when her songs went viral on TikTok. She probably cringes anytime the app is brought up, though, in fear of being labeled a TikToker. McAlpine isn’t merely a passing trend.

McAlpine’s openness amounts to an outpouring of real and honest lyrics. It’s easy to relate to these moments of heartbreak and joy. Her feelings drip palpably from every word. McAlpine’s folky debut album, Give Me A Minute, was released in 2020 and received praise from Phoebe Bridgers, Shawn Mendes, and FINNEAS, who is now featured on her second album five seconds flat. The new music, set to release in April, offers a new side of McAlpine, unafraid to grow out of the genre she was initially labeled under. With an upcoming tour opening for Dodie, and performances on Ellen and The Tonight Show Starring Jimmy Fallon, the spotlight is undoubtedly aimed at her.

So maybe she’s not the girl next door anymore, but the success and LA of it all doesn’t seem to be seeping into McAlpine’s head. Her genuineness radiated when she sat down to discuss her new album with Document—as it does in her music. 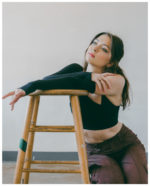 Hair and Make-up by Shaina Ehrlich.

Ryan Williams: Your new album five seconds flat comes out in April. Tell me a little bit about it.

Lizzy McAlpine: For this album, we wanted to do something different from the last one, style-wise and genre-wise. We wanted to push it in a direction that was far away from the singer-songwriter indie folk world. And I think we successfully did that. I wanted to give people a different sound and really try something new, because I aim to do that with all of my projects.

Ryan: With this album, you’re going to be releasing a short film. The music kind of lends itself to that, because your lyrics have a very narrative quality to them. Have visuals always been a part of your music or part of who you are as a person?

Lizzy: Well, in middle school, me and my best friend would shoot movies. We’d make music videos, we made short little trailers. We did all of it. So I’ve been creating that kind of stuff for a long time. Granted, those were very cringy and I never want to watch them ever again.

Ryan: Didn’t we all? I was the kid that stared out a window when breakup songs came on and pictured myself in a movie—like, directed little music videos in my head.

Lizzy: Oh my gosh, yeah. But they helped me get to where I am, so I have to give credit. I’ve always been very visually creative. I had the idea for a film a while ago, while I was working on my EP that eventually would become When The World Stopped Moving: The Live EP. We were trying to produce it, and it just didn’t end up sounding like I wanted it to. But I had the idea to make a film for the EP, and so when we scrapped it and moved on to the album, I was like, ‘Okay, I’m going to take this idea and move it over to the album.’ We obviously couldn’t make a video for every song, which I would have loved to do. So we just chose five.

Ryan: What was the process of conceiving the film? Were you very hands-on in its creation from start to finish?

Lizzy: Yeah. I came up with the concept and I wrote the script. I pretty much came up with everything. Then I brought it to Gus Black, the director who I had just seen on Instagram. I saw his videos and I was like, ‘Oh, he’s cool.’ We had a Zoom call, and I basically just went through my Google Slides project that I had made, and my Pinterest boards that I had for every song. I was like, ‘This is what I want to happen, and this is what I want to look like.’ And he was like, ‘Yeah, let’s do it.’ Gus was never once like, ‘We should change this, or we should do this.’ He just let me do what I wanted to do and was very open to anything, which was really cool.

Ryan: I’ve seen the music videos that have come out thus far. There is definitely the sense that you played a big part in making them—that they were the brainchild of the same person who made the music.

If you had to pick a song—any song ever—to be the opening sequence to a movie about your life, what would it be?

Lizzy: My gosh, that is the hardest question I’ve ever had to answer. Oh my gosh. I need to look at my Spotify right now. I feel like I don’t even know what songs I like. [Long pause]

[It would be] this song, More to Give, by Isabel Pless. She’s phenomenal, and all of her songs sound like they’re from a coming of age movie soundtrack. I just love her so much.

“When I write, I’m pulling from my experiences, and I really like putting specific details in my songs. “ 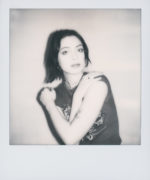 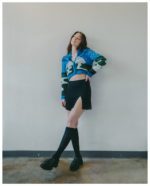 Ryan: To me, a bit of this album has that larger than life, almost theatrical sound. I don’t know if it’s just because you have strings and real instruments, which makes it feel very big and full. You said you wanted to give something different with this album, but can you talk a little bit about its sound?

Lizzy: The theater thing, it’s always in my music, even if I’m not trying to put it there. Like, that’s just where I came from. My grandparents would take me to see Broadway shows. We’ve done that ever since I was eight years old. My mom would listen to Broadway all the time in the car. So that’s just what initially inspired me as an artist. So it’s always going to be a part of my sound. I’m not trying to make it a part of myself, but it just ends up in there somehow, which I’m not mad about.

Lizzy: The sound for this album, the genre that I had in my head at first, was indie rock. And we did that, but I feel like all of the songs on the record sound different, [even though] they all make sense on the same project. The most indie rock is probably all my ghosts, and that was the first song that we recorded for the album. So we were really in the headspace of like, ‘We’re going to do indie rock,’ and then we strayed from that.

At a certain point, we were like, ‘Why? Why don’t we just make the songs sound like what they’re meant to sound like, and not think about genre?’ So that’s what we did. I guess the overall genre of the album would be alternative.

Ryan: I think that’s something we’re seeing more in the music industry as a whole: not pigeonholing people to a certain genre. People can be multifaceted. So it’s definitely exciting to see you just going for that.

Your lyrics are very conversational, and some of the songs on five seconds flat, like called you again, almost start out like you’re having a conversation with someone. Then it becomes more like an internal conversation. On one of your older songs, Pancakes for Dinner, you have a line that says, ‘And I wish that you could hear me when I talk to myself.’ Is writing something that allows you to say things that you normally wouldn’t?

Lizzy: Normally, I’ll start writing a song and I will not know what it’s about. I usually let whatever wants to come out of my brain come out. I just write it down and it usually ends up becoming a song, but I never really know what it’s about until I get to a chorus, or I finish the pre-chorus. I go back and I look at the words and I’m like, ‘Oh, that’s what that’s about. Obviously, because I’m going through that right now.’ But I do surprise myself.

Ryan: Does writing help you process what it is you’re feeling?

Ryan: I’ve been listening to your album all week. The first time I was listening to it, my roommate and I were putting up frames and chemtrails was playing. She turned and was like, ‘Is this about her dad?’ I kind of shrugged. And just as I did that, the voice memo came on and I turned to my roommate and she was in tears.

Lizzy: Oh yeah, for sure. I don’t really go back and edit my songs. I know a lot of writers who will write a version of a song, and then go back a couple weeks later and be like, ‘Oh, maybe I’ll change this and this.’ I kind of let the song come out in its final form. Usually, it just happens.

Ryan: You also have such a specificity to your music. There are certain lyrics on the album that really hit me. Do you find that writing specifically evokes more relatability than if you were to write more generally?

Lizzy: When I write, I’m pulling from my experiences, and I really like putting specific details in my songs. I like that level of vulnerability and realness. It just makes it feel more real. I do think that makes it more relatable to people, even though it’s specific to my life. We all have had the same experiences. No one is going through this alone 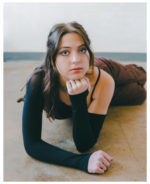 Ryan: I want to talk a little bit about FINNEAS, who’s featured on hate to be lame, one of my favorite songs. He’s someone who’s writing and producing for the top artists right now, with Grammy’s under his belt. How did it feel to know he’s a fan of yours? How was working with him in general?

Lizzy: It was cool. I posted a cover of one of his songs over the summer, and he followed me. We DMed a couple times, but nothing about music. It was just, like, random stories. Then we were getting the features together for this album, and I was like, ‘I really want FINNEAS on the song.’ I DMed him on Instagram, and I was like, ‘Hey, I’m working on my second album, and there’s a song on it that I think you would sound really good on. Let me know if you want to hear it.’ I didn’t even send it to him. Within five minutes, he responded in all caps, like, ‘YES. HERE IS MY NUMBER.’

Lizzy: It was so surreal. He wrote his verse and recorded vocals. Listening for the first time was such a surreal experience—to hear his voice on my song. That was so crazy. He’s been so supportive of me and this song, throughout this whole experience. You don’t really see big artists like that supporting smaller ones. The fact that he really believes in me, in the song, means a lot.

Ryan: What’s one of the unreleased songs that you’re most excited for people to hear?

Ryan: You’re going on tour with Dodie soon. Are you excited about playing live shows?

Lizzy: I’m just excited to be able to play these songs in front of people. 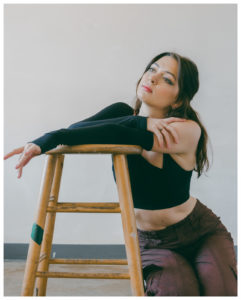 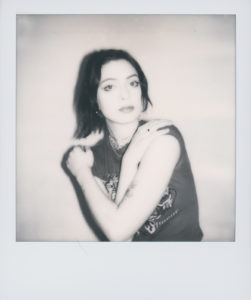 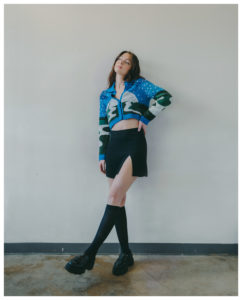 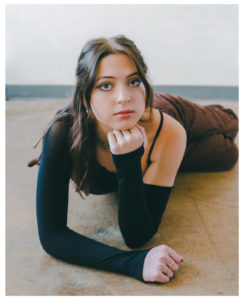