For Document’s Winter 2021/Resort 2022 issue, the designer talks attraction, community, and her image of the ‘ideal man’

“How do men want to feel?” asks Bianca Saunders. “Even if you’re the smallest guy, you want to feel big.”

That’s where Saunders’s muscle man comes in. This character gets curved sleeves, which mimic the shape of strong biceps. He’s followed by the henchman and the corporate gangster. For these two, Saunders takes stiff fabric—folding it upon itself to build a line across the shoulders. The effect is broadening. It straightens the posture. How else do men want to feel? Saunders considers the party boy of South London, where she was born and is now based. She considers the super-nerd who likes dancehall concerts and the offbeat executive seeking an alternative wardrobe for his weekends. For these men: printed denim, ruched short-shorts, and a perpetually crumpled dress shirt, respectively.

Saunders founded her eponymous label in 2017, and it quickly gained both prominence and a slew of high honors. The menswear designer is eminent for her nuanced approach to masculinity—she makes clothes that are elegant and structurally simple, but interesting down to the detail. Twisted seams, cinched waists, asymmetrical, cropped cuts, and surprising color: These are just a few of the many elements that bring Saunders’s collections to the forefront of a new sort of masculine aesthetic. Recently, the designer took home the 2021 ANDAM Fashion Award, which has only brightened the spotlight she was already standing under. “It gives me more motivation to make sure that my brand becomes what I want it to become,” says Saunders of the accolade. “And that is a heritage brand—a brand that exists beyond my years.”

“I thought that I was able to find my aesthetic, and a bit more individuality in my work. I liked the idea that menswear had rules to it, and I thought it was quite removed from me.”

Undeniably, Saunders knows how to carry out a dream, which is what fashion was to her at the start. “Literally from the youngest age I can think of, I always just thought about what was the right path to take to get here,” she says. She recalls a childhood centered around the hairdresser’s, where her mother worked; she would read designer profiles in the women’s magazines. “That’s what influenced me to take the path of studying fashion, from BA to MA.” It wasn’t until Saunders was earning her master’s at the Royal College of Art in London that she realized her propensity for menswear. “I thought that I was able to find my aesthetic, and a bit more individuality in my work. I liked the idea that menswear had rules to it, and I thought it was quite removed from me.”

Formal education was a route that paid off. Today, Saunders holds rare technical skill, and a fully-formed ethos to match. Her garments are conceptually rich, well-researched, and well-constructed. Still, they’re approachable, privileging playful charisma over any intellectual austerity. “I don’t like things to be too serious,” she says, “but I love for people to look very good.”

People can see themselves in Bianca Saunders—and not just because it looks good on the rack. Consider the brand’s campaign videos: For Spring/Summer 2021, the designer released a short film called The Ideal Man, inspired by Hans Eijkelboom’s 1978 photo series of the same title. Eijkelboom asked a hundred women to describe their personal “ideal man,” then chose the most dramatic responses, and dressed and made himself up in their images. He took self-portraits as he went. Saunders’s video interpretation likewise favors the archetype: Hyper-specific characters don her clothing—like the corporate gangster and the super-nerd, above. Her film’s three models are essentially actors, positioning themselves first as “college grad with diploma,” then as “man going to his first ball in heels,” then as “gully queen at his engagement party.” 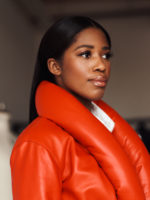 Shirt by Bianca Saunders. Coat by Loewe RE22.

Much of Saunders’s work is culturally informed by her Jamaican roots, hence the references to dancehall music and the gully queen community. She pulls from history—from rude boy street culture of the 1960s, to the mixture of tailoring and casual wear she saw sported in family photos from her parents’ youth. “There’s a scarf that I had in the Autumn/Winter 2020 collection,” says Saunders, “and it has a saying that most Jamaican households have: ‘Remember this / When you come here / What you do here / What you see here / What you hear here / When you leave here / Let it stay here, or / Don’t come back here.’ It’s kind of like a member’s club, in a way. Taking those small elements, and bringing them towards the forefront of our brand is what it’s all about.”

If you ask Bianca Saunders, the “Bianca Saunders Man” is a polymath. He toes the line between tradition and modernity, hardness and softness; he fits with more than one crowd. Saunders’s archetypes—the characters who model her clothing, who grace her short films—function just as they do in written storytelling. They bleed familiarity. They’re universal despite their particularity—because of their particularity. “I would say that the ideal man of the 2020s is someone that is very multifaceted, and can exist in different environments,” says Saunders. “I’ve tried to make my brand not representative of one type of person. I want people to always see a part of themselves in it.”

That extends to any gender, Saunders makes clear. But while anyone can wear her past collections, she wouldn’t call them unisex. “There are still things that are considered feminine [or masculine], and people forget that there’s loads of in-between,” Saunders says. “There are so many brands that are just womenswear. To have something specifically for menswear—that pushes the boat out. It pushes the boundaries, in terms of their wardrobe.” 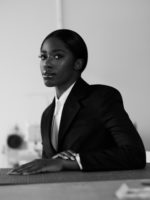 Shirt and jacket by Prada RE22.

At the heart of Saunders’s practice isn’t a knack for knowing, or understanding, or mastering any one thing. It’s not about business savvy, or mind reading. Rather, it’s the designer’s respect for the act of observation—of her world, of others’ worlds—and her ability to render the essence of whatever it is she sees, that carries her through. That’s why Saunders’s garments drape just right: She has a feel for how her patron wants to look. That’s why she chooses models who look like her friends—why she asks them to talk, to dance, to act natural while they show her clothes. Saunders distills charm; she lives for personality. “To tell you about my world, is to take time to study it,” she says. “There are different ways of telling a story, and I think it’s important to keep telling it in different versions.” 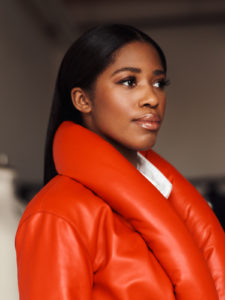 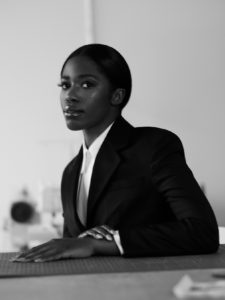