At 81, the Italian iconoclastic designer and architect Gaetano Pesce is still kicking against the boundaries of art, design, and industry from his studio in Brooklyn Navy Yard. A new, 116-page book, Out in the World with Gaetano Pesce, features never before seen works produced by the artist in the last year, a set of kittenish portraits by the legendary photographer Duane Michals (who has shot everyone, from Andy Warhol to Marcel Duchamp), a trenchant interview with New York Times critic Sophie Haigney, and numerous collections of photos commissioned from contemporary photographers that explore Pesce’s continuously revisited work through new lenses.

The book’s textured green cover features a 3D puffy image plate, first of its kind for publisher Literal Matter. The images capture Pesce’s work out of the gallery and in the world: Charlie Engman’s mother crawls beneath a tall felt and epoxy resin prototype of the Grown chair, Steve Harries captures Fish Design vases with in-camera manipulations, and Leonardo Scotti photographs sitters on Nobody’s Perfect chairs on the streets of Milan.

Out in the World marks the beginning of a new chapter for former contemporary art and fashion magazine Museum of hardcover releases that will challenge the form of traditional art books. In observance of the book’s release, Laura Bannister, half of Museum’s Australian-born, New York-based, brother-sister duo sat down with Document to discuss the transition from magazines to books, the new vanguard of documenting art, and, of course, Gaetano Pesce. 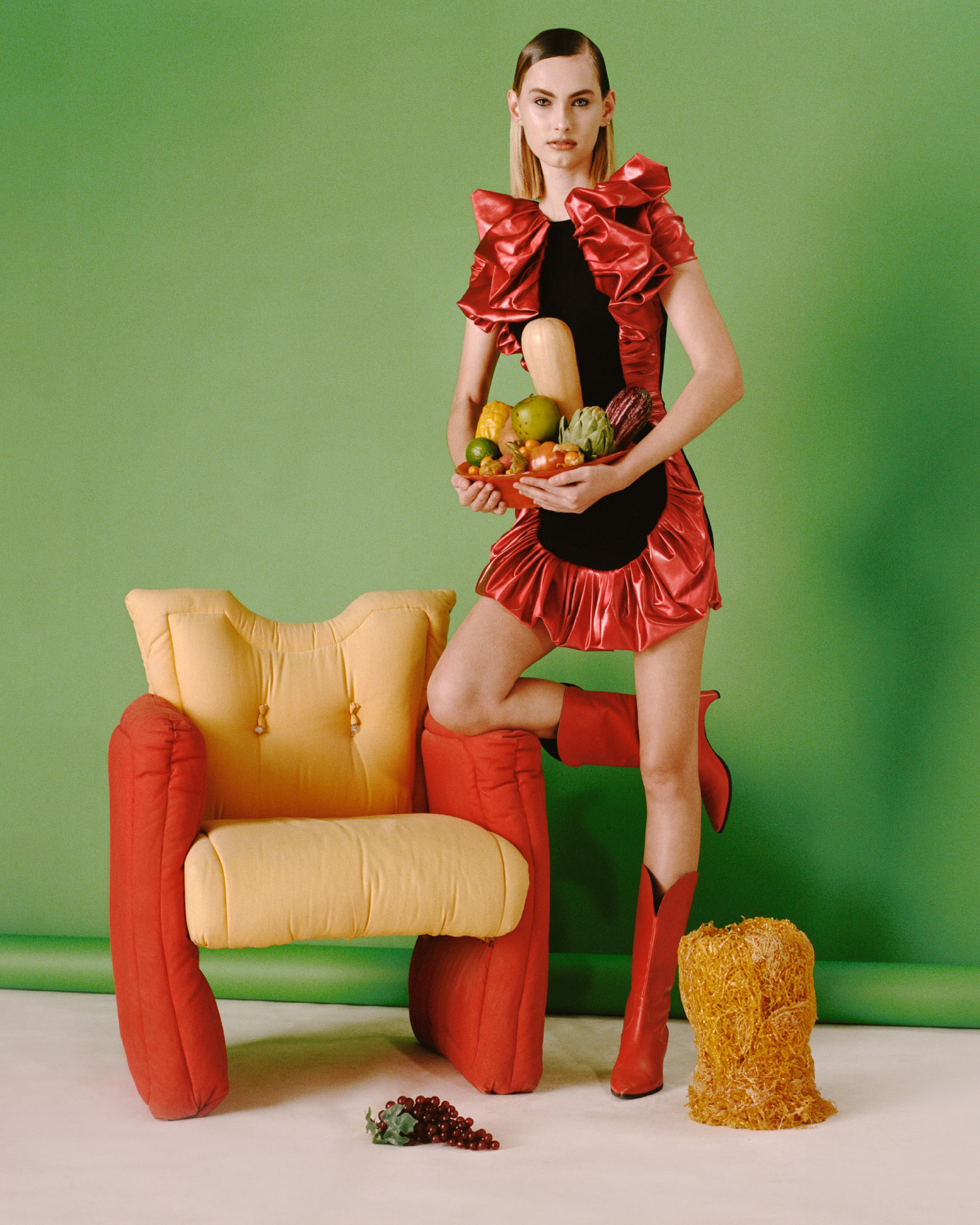 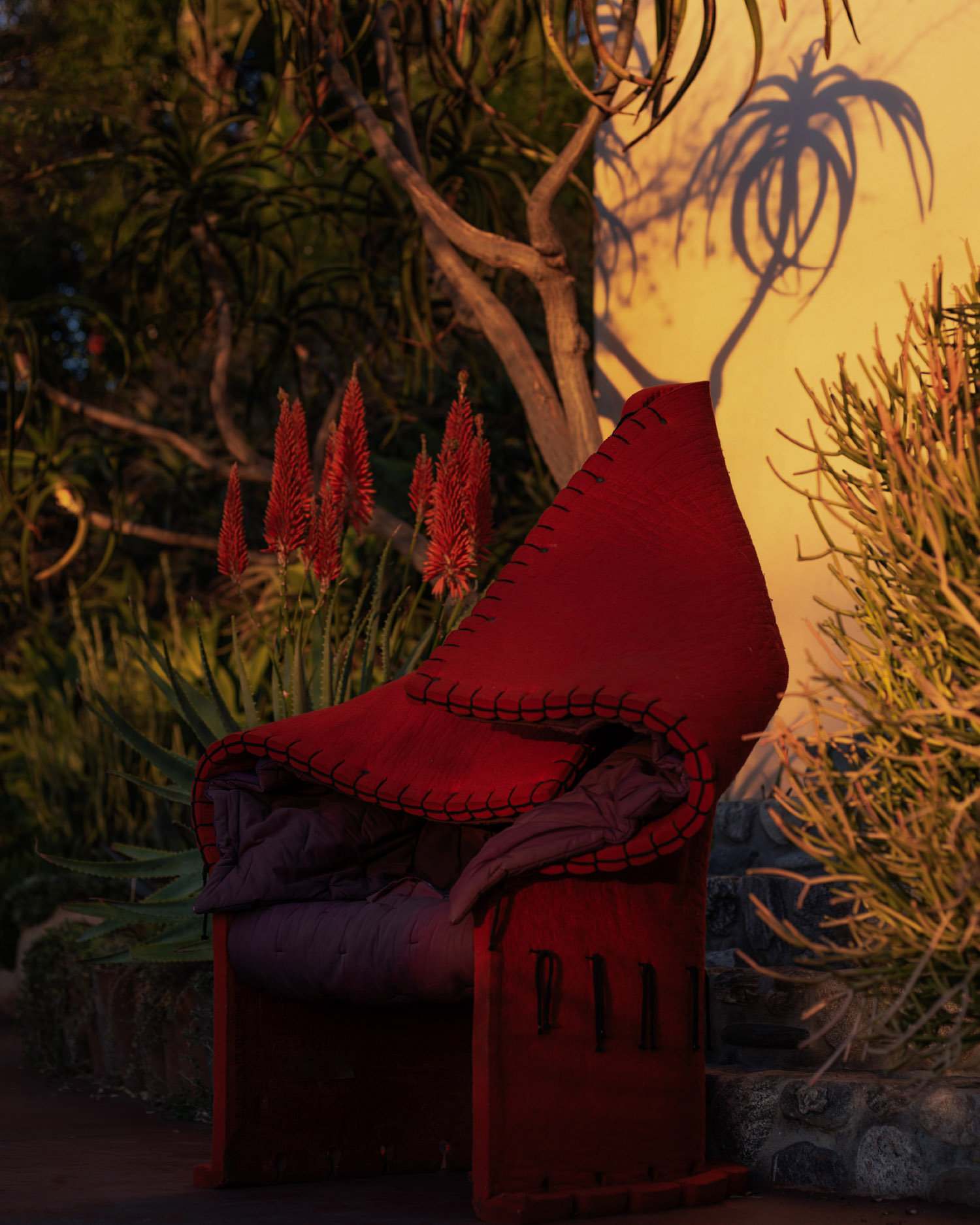 Megan Hullander: How did Museum get started?

Laura Bannister: We’d been publishing an art and fashion magazine biannually for about half a decade. Each issue was conceptually themed—a whole issue might be themed around noses, for instance. We’d stage launch events that offered new dimensions to the issue: for the Noses edition, it was an evocative, sensory party in a bakery with bakers churning out fresh bread. For our ‘Souvenir’ issue party, we created a one-night-only souvenir shop inside a gallery, with a custom currency.

Megan: And what instigated the transition from magazines to books?

Laura: After five years of making magazines, Matthew and I began talking about the next phase of Museum. We’ve always seen it as an ongoing print project, one that could shift its form and evolve. We were interested in the idea that a book could function as an exhibition of sorts, a format that could both reflect and adapt to its subject matter. Each Museum book will be themed around a different artist, group, or movement. The form will change each time—it’s completely shaped around whoever the book is focused on. There’s something really freeing for us about being untethered to a uniform shape, composition, and size.

Megan: How did Pesce’s work translate into the form for Out in the World?

Laura: Pesce’s work is so tactile; it was important to us that the book felt tactile too. There’s a puffy image plate on the cover featuring a Duane Michals portrait of Pesce, taken in his workshop last year. It’s like the puffy photo stickers you’d use as a kid, really playful and three-dimensional. It was the first time our printers in Italy had worked with puffy stickers, so it took a little experimenting.

Megan: Even with this transition, Museum is very much print-oriented. What do you see the role of print as now? Because it’s so different than it was before this digital sort of boom.

Laura: Matthew and I have always been interested in print, not so much digital. The exciting thing about print is its physicality: an object forces people to navigate around it. They carry it with them, feel it in their space. It’s a different type of connection. I don’t think print supersedes digital in any way, but for us, it’s always felt more interesting to engage with.

Megan: How did this book come together? Why did you choose Pesce to launch this project with?

Laura: We’d actually been talking to Pesce’s studio since 2019. They’ve been very gracious and generous, allowing us incredible access. My brother and I have always loved his work. Probably the first thing I saw in the flesh—bar his vases—was one of his enormous sculptural foot seats. The foot was really something else, pitch black, severed from a body, as huge as a sofa, demanding your attention.

Pesce is in his 80s now; he’s had a long and fruitful practice. And that means there are other (excellent) books that exist on his work—so it was important to us to treat the documentation of his pieces in a different way. The books that do exist employ a more traditional approach to imagery, documenting chairs as one would artworks in a gallery, or using archival imagery that already exists.

Megan: What makes this book different from those that came before it?

Laura: Except for some archival imagery that appears in the essay and interview, all of the book’s photographs are newly commissioned. We shot throughout 2020 and a little in 2021, loaning from collectors, museums, and other design institutions, from stores and Pesce himself. Some of these images push his pieces to another place entirely—they’re as much about the object as they are about the photographer. For instance, Steve Harries  photographed still lifes of various Fish Design vases. They’re hand-poured resin, and appear solid, but are extremely bendy and malleable. Steve’s photographs abstract the materiality of their surfaces, manipulating their forms in camera. These vases have been captured in a similar way many times. Steve brings something new, which changes the way we interact with the material and surface.

Megan: And why do you think his work is still relevant today?

Laura: Several works in the book were made in 2020. Pesce still works every day, in his workshop in Brooklyn Navy Yard, or from his home. He doesn’t really reference other makers, but he often references and doubles back on himself. Sometimes a piece will rhyme with another from decades before. He’s exceptionally curious and works with a lot of young people. And he pushes himself to innovate with new materials or find new ways still to manipulate the plastics he’s been experimenting with for decades.

Megan: Do you think there is a particularly New York quality to this book?

Laura: I’m actually not sure this is a New York book, even though Pesce lives and works here, and many of the photographers we worked with live in New York. We photographed his pieces in many other cities too: Milan, London, Sydney, Tokyo. That’s not to say Pesce’s practice isn’t inspired by this city—for instance, in his Brooklyn workshop presently, there’s a new, giant sculptural piece that opens outward via remote control. It reveals an instant office setup: a desk and shelving unit. He liked the idea you can get anything you want when you want it in New York, so made a desk on demand. But overall, I’d say his practice—be it architectural or interior—connects with people beyond any one place. Even if it’s connecting in the simplest way, through the soft materiality of plastic, enduring religious symbology, or anthropomorphic elements, like a chair that looks back at you. 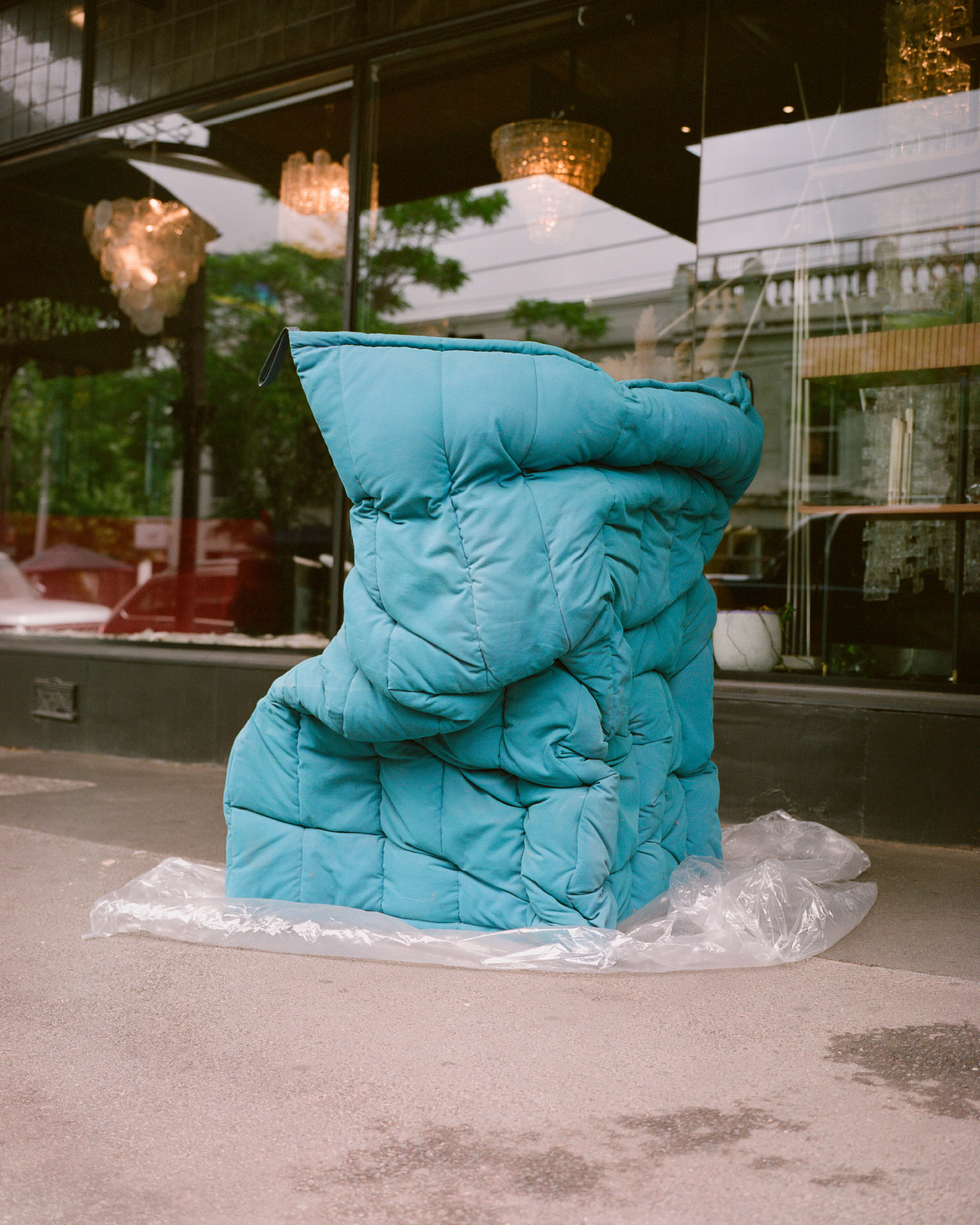 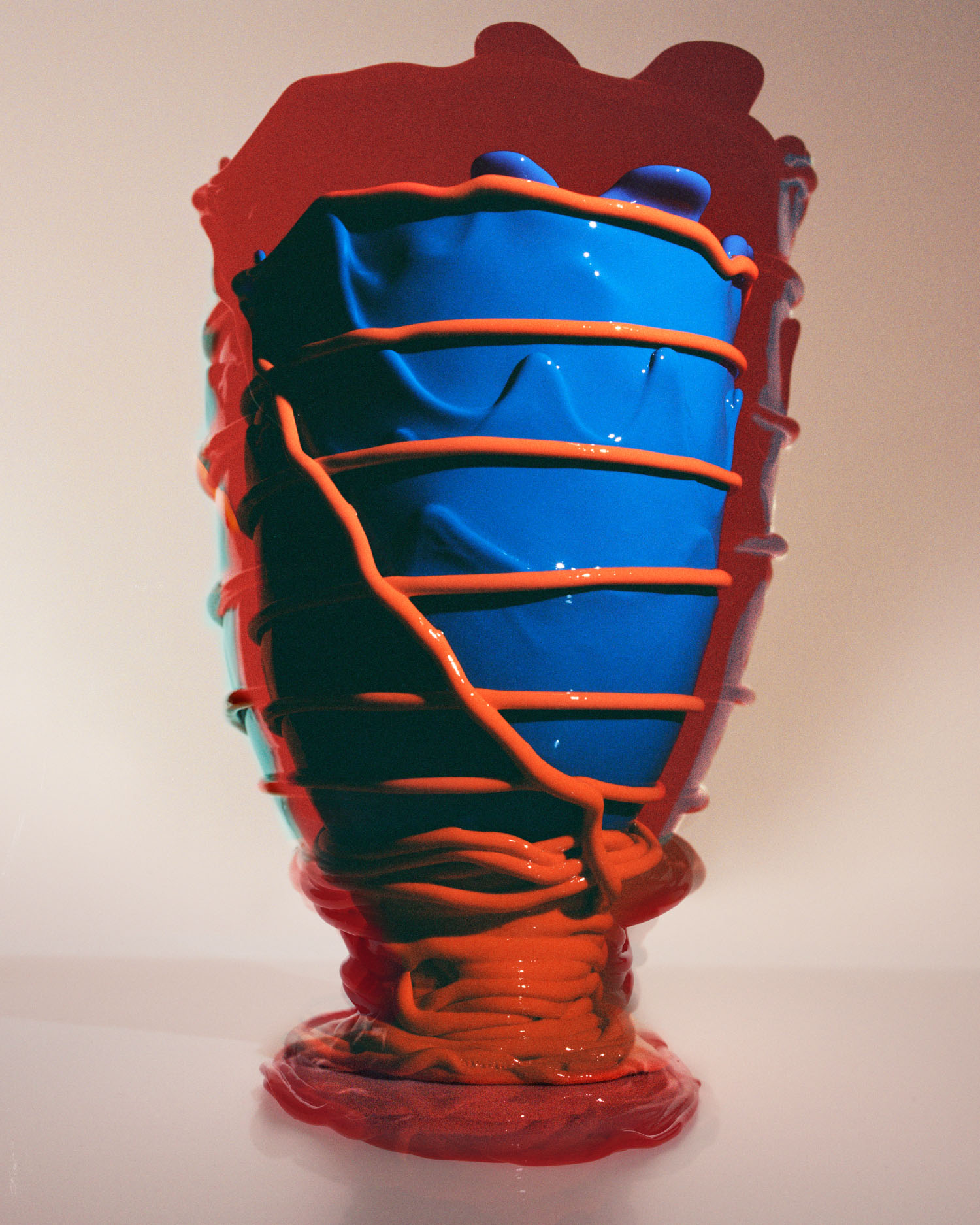 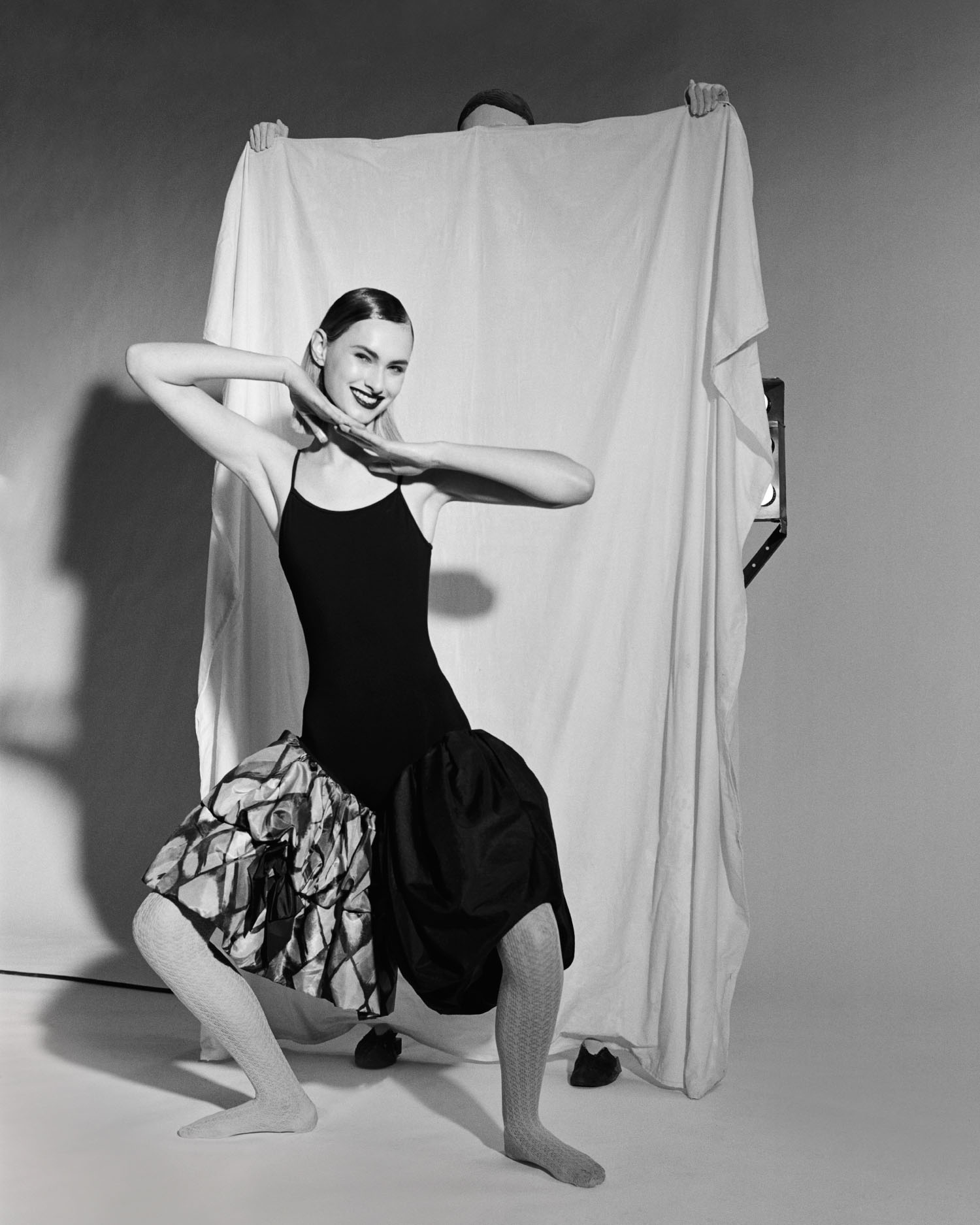