In 1948, the American novelist James Baldwin left the United States for Paris, at age 24 with only $40 ($400 today) to ensconce himself in a new cultural atmosphere, free from “the racial and sexual discrimination he experienced in the United States.” There, he embedded himself among a coterie of like-minded French intelligentsia, finishing his first novel Go Tell it to the Mountain.

Last week, Baldwin’s exodus to France served as the basis for Virgil Abloh’s latest Louis Vuitton Men’s Collection. The Fall/Winter 2021 collection is inspired (in part) by Baldwin’s 1953 essay “Stranger in the Village,” which centers on the contemplations of an African American man reflecting on life in the US in the context of life in Switzerland. With this in mind, Abloh staged his latest collection, titled ‘Ebonics / Snake Oil / The Black Box / Mirror, Mirror’ in Paris and Switzerland.

That Abloh would look to his historical antecedent as inspiration demonstrates the ways in which fashion is responding to the larger world, while his very existence as one of the preeminent Black fashion designers, has itself prompted conversations around the complexities of Black figures in the industry. His appointment to the Louis Vuitton men’s division sparked exuberance among critics who have long felt Black representation was glaringly absent in the world of high fashion, but one year later, Abloh was the subject of widespread internet opprobrium from critics who felt he was tone-deaf to the burgeoning George Floyd Protests—a case study in the singularly complex position of Black Americans navigating fashion’s capricious terrain. “Once you’re a success, especially a unique success, and a pop culture exemplar, this comes with the territory,” Bethann Hardison, the former model, who has become an advocate for representation in fashion told The New York Times last year. “You become a victim of it, but you are also a winner of it, and you have to wear that crown. The question is how you wear it.”

Whereas his last collection featured cartoonish dirigibles and quirky, asymmetric colorful getups, this collection is decidedly more contemplative. Abloh has abandoned his globalized ensemble of animated LV mascots and has enlisted a cast of diverse models hailing from coastal America, coastal Africa, and Asia (among other places), Black artists such as Saul Williams and Yasiin Bey, and the enduring spirit of Baldwin’s creative genius.

The collection itself is undergirded by a conceptual framework of archetype characters. The looks are a swipe at society’s outdated and outmoded caricatures—The Writer, The Artist, The Gallery Owner, The Salesman—that scramble, disentangle, problematize, and re-envision the relationship between fashion and labor. It’s reminiscent of the 2017 Vetements collection, which reconfigured the survey of social uniforms (a “punk”, a “bro”, a “policemen”). According to the press release, the collection aims to “investigate the unconscious biases instilled in our collective psyche by the archaic norms of society. Predetermined perceptions, they imbue our outlooks with manmade myths connected to the genetics of people, ideas and art.” We are, in this radical vision, no longer defined by society’s uniform expectations: the man makes the clothes and not the other way around—we swap who we are expected to be, for who we choose to be. In bending the narrative contours of fashion to the trajectory of Black artistic history, Abloh, populating his clothing with Black faces and Black artists, is deliberately reimagining fashion’s future.

In this act of refashioning, the collection’s accompanying film begins with wide-angle shots of models foraging through a snowscape before entering a glassy marble set—something straight out of The Matrix. Models saunter through the space clad in gray and black suits and white sneakers, carrying silver monogram briefcases, some with newspapers folded under their armpits. The poet, musician, and activist Saul Williams rattles off a litany of historical names and events—”Kennedy, King, Four Little Girls, Hiroshima, Nagasaki”—to the harrowing sonics of string instruments. 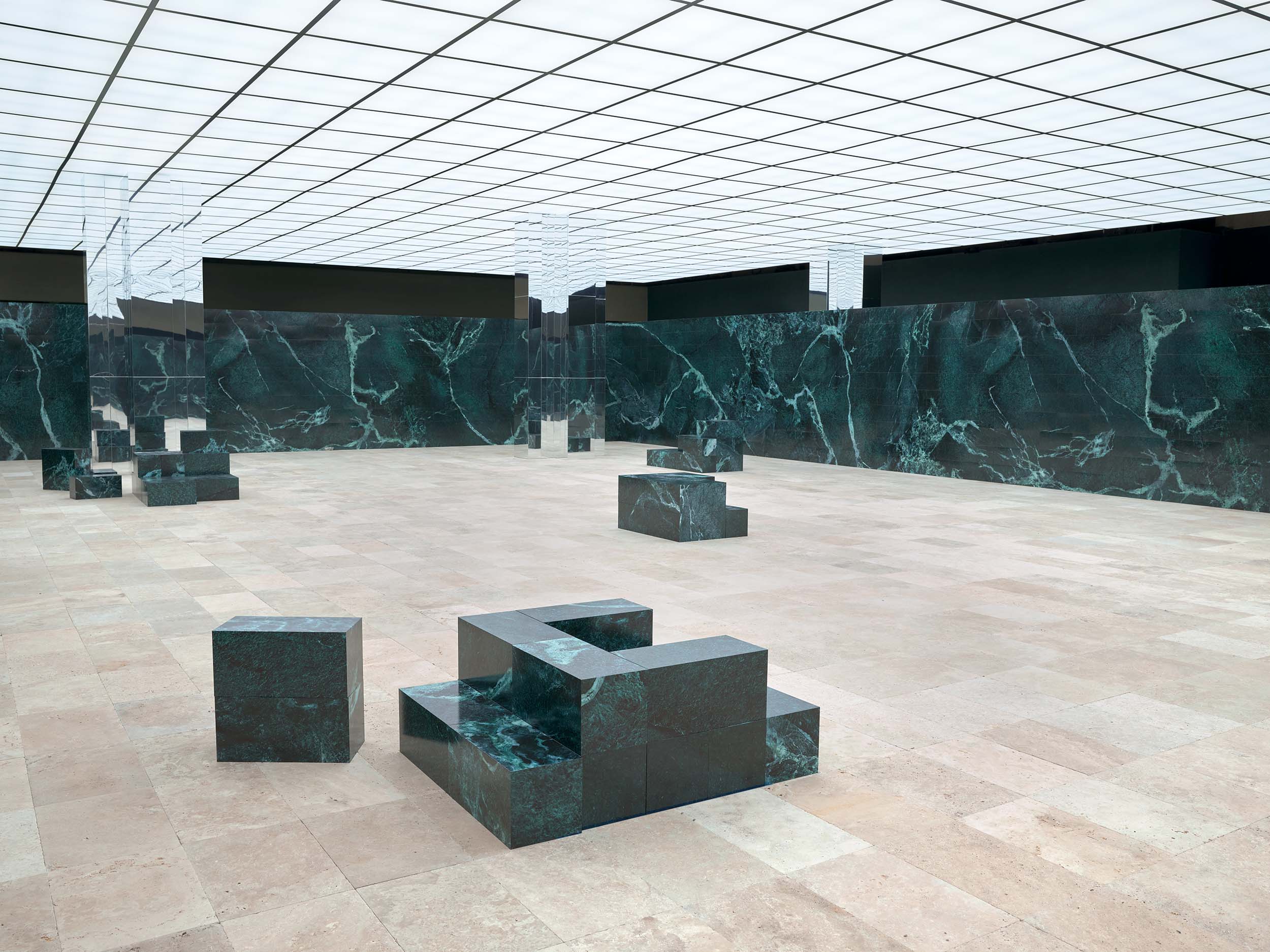 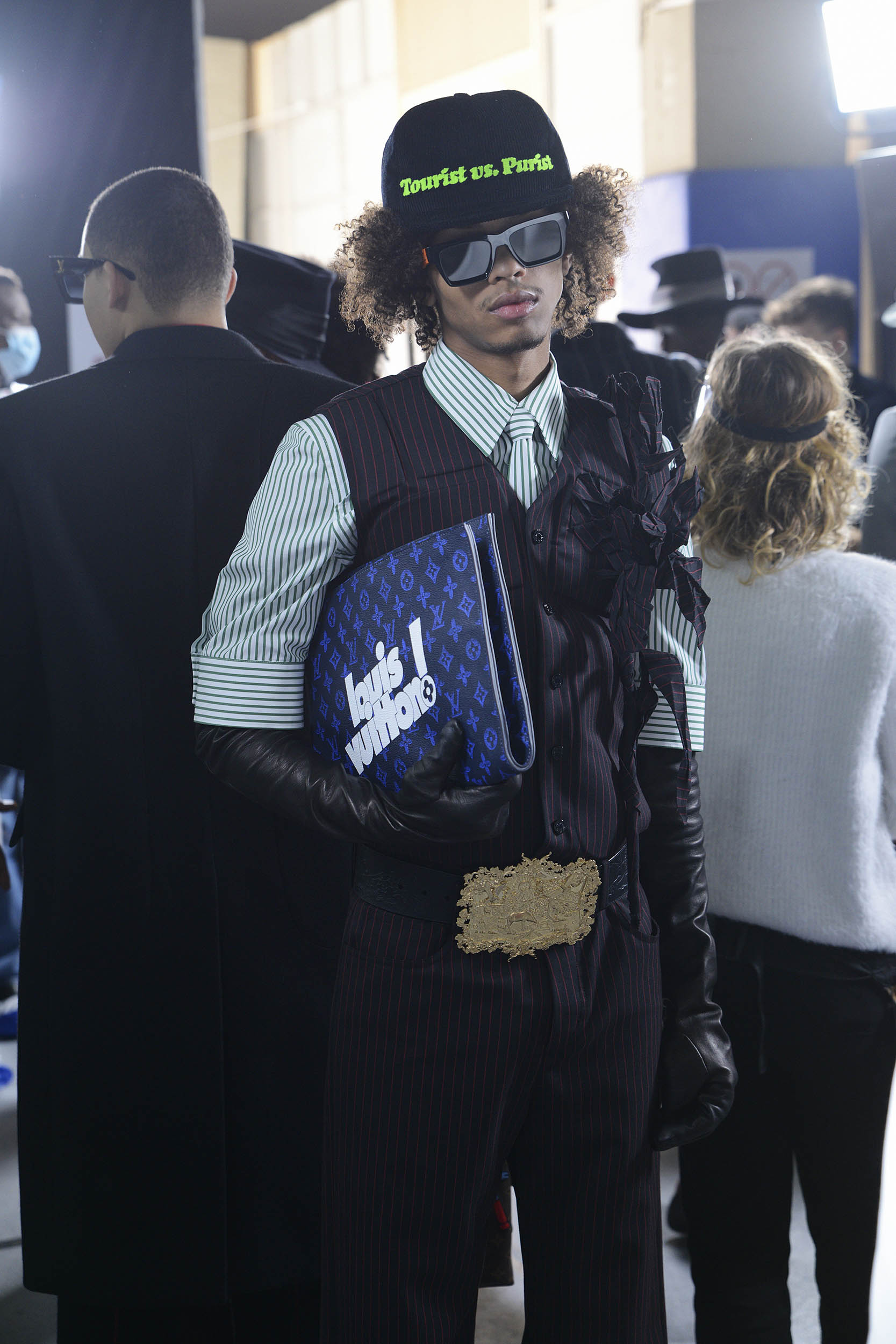 Emerald dominates throughout the collection: a green track jacket and pants, green suits and accompanying slacks, all worn by models who sit and stand, while a singular figure, wearing a grayish-green LV suit dances above and between them. The camera follows the pirouetting figure, as poet Kai-Isaiah Jamal narrates: “You know when all the girls used to take things for runways or ballrooms, it isn’t stealing or robbing, it’s stepping into a fantasy that shouldn’t be a utopia but just a living right. I think as Black people and trans people and marginalizing people the world is here for our taking as it takes so much from us.”

Later in the film, a gesticulating Yasiin Bey, wearing an all-green Mad Hatter-esque getup, speaks over a hip hop beat. The inclusion of Bey and Williams—the former a global citizen who once demonstrated the horrors of American-style torture and Williams, an Occupy Movement activist—is itself a social commentary on power and resistance that is woven into the collection. As Bey’s lyrical alchemy heats up, the camera pans toward a model whose hat reads: “TOURIST VS. PURIST”.

For Abloh, the founder of luxury streetwear label Off-White, language has always been the accouterment of ironic interplay that scrambles the sign from the signified (a bag emblazoned with “SCULPTURE”). With his latest collection, Abloh’s type, few and far between in this collection, is the indicia, not of irony, but of empowerment: “the outsider, who aspires towards an esoteric domain of knowledge versus the insider, who already occupies it,” Abloh states in the collection’s accompanying text which it reads like a manifesto. In this newly charged typographic construction, type-driven accessories are no longer the stuff of Dada-esque playfulness, but declarations driven by the demands of the politics of now.

With this collection, Abloh, the rising king of fashion, now wears the crown with a different sense of urgency and responsibility. 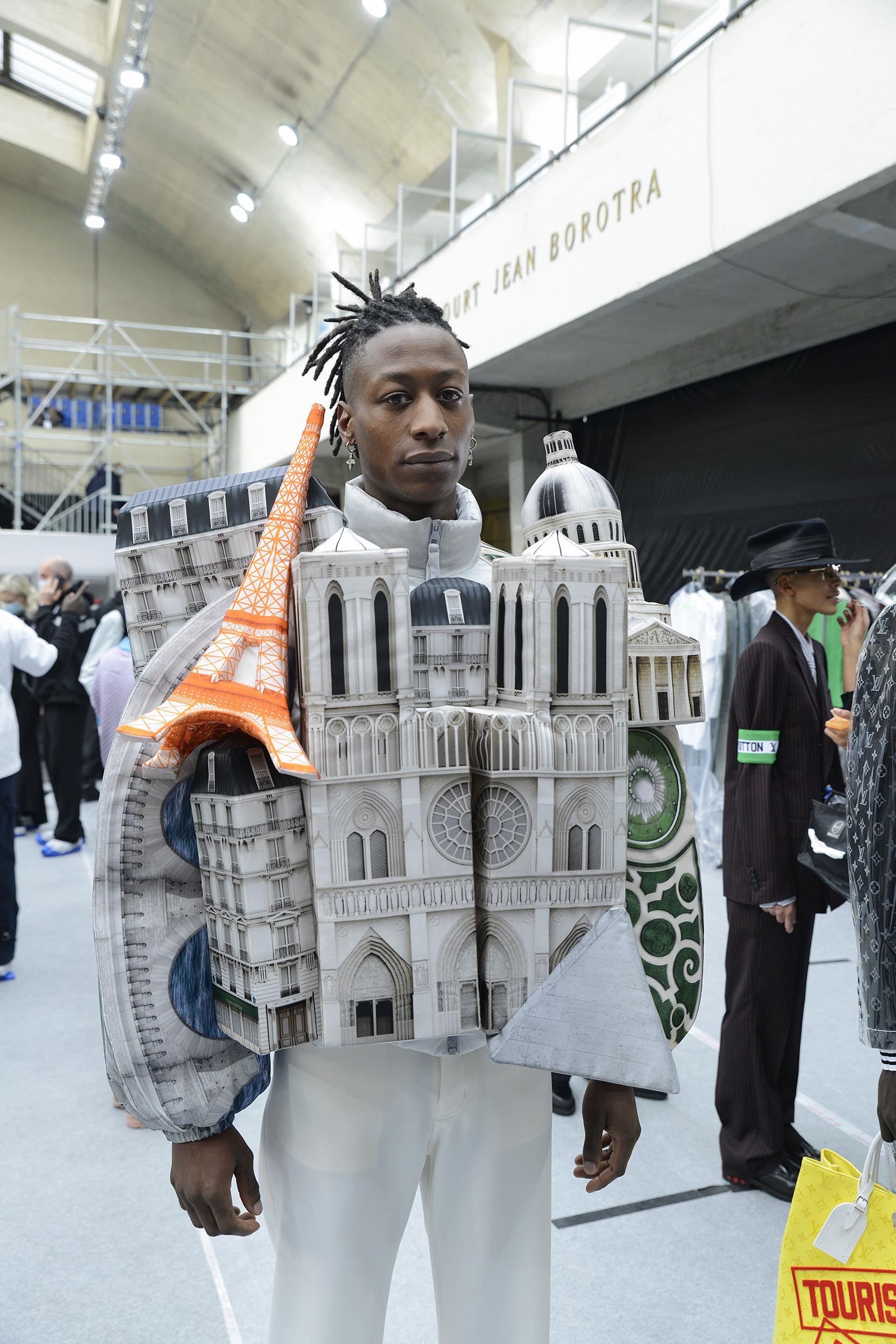 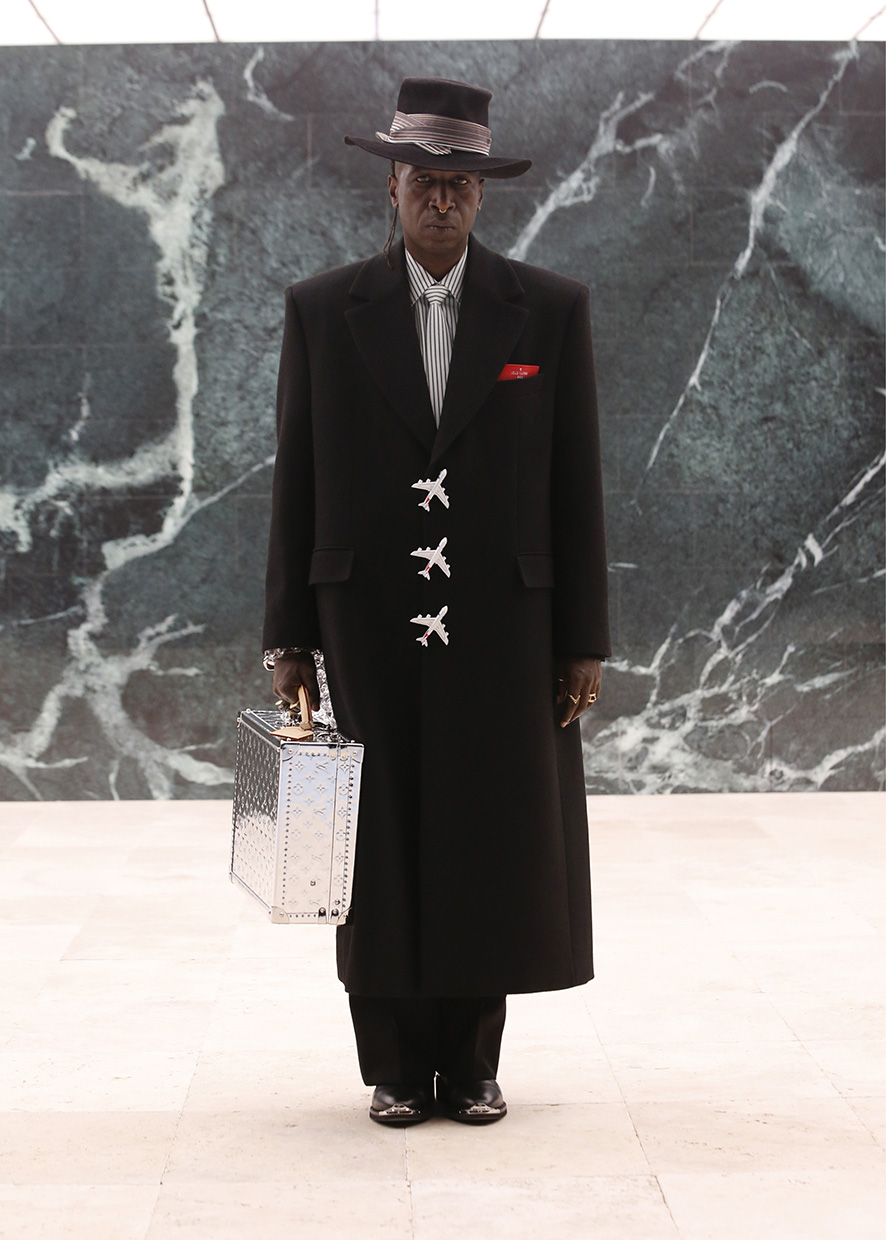 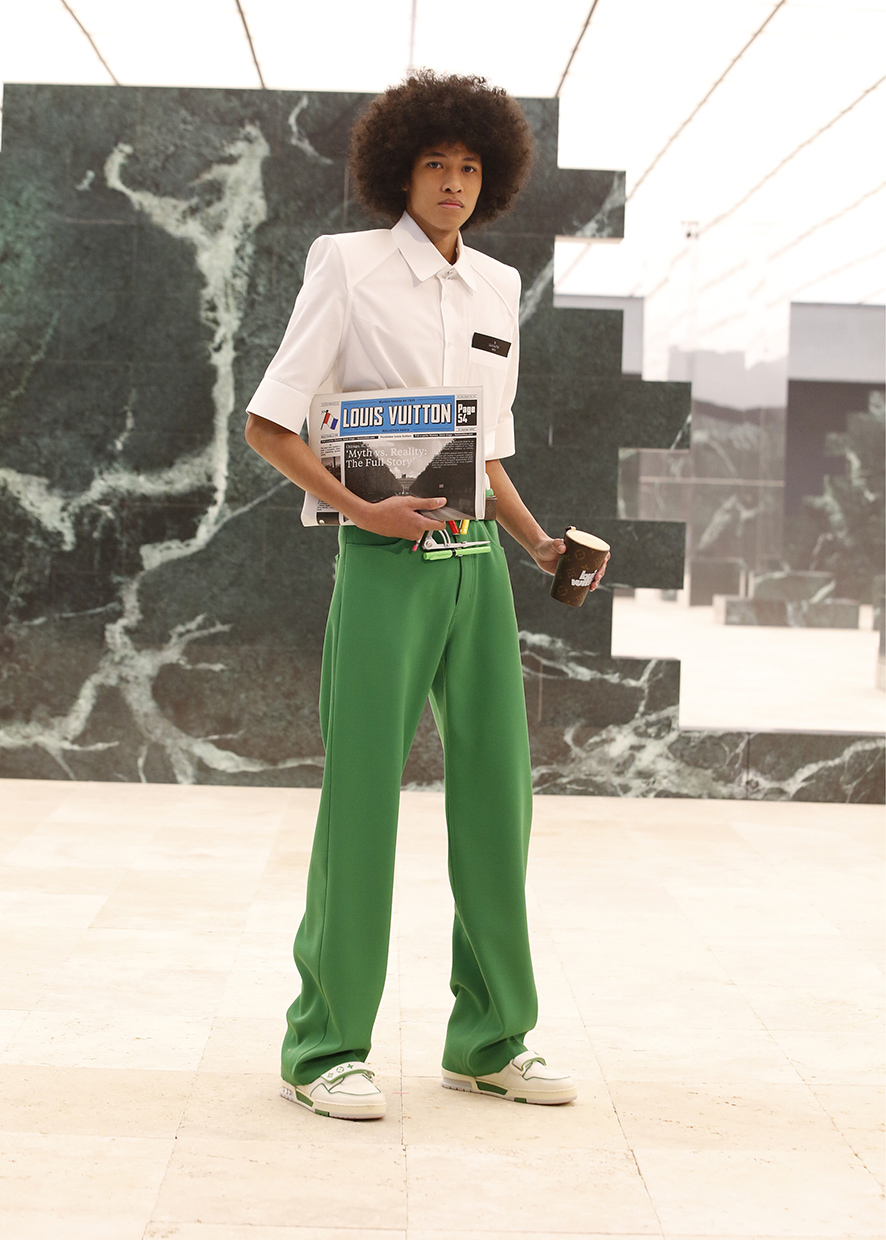