Some 200 years ago, Alexis de Tocqueville traveled from France to the United States to study America’s prison system, then considered to be the most magnanimous and just penal system in the world (that didn’t age well). Instead, he ended up writing Democracy in America out of admiration for the great American experiment. He believed, however, that as long as democracy persisted, it would also have to devolve to meet the tastes and expectations of the masses—that majority rule would create long-standing omnipotence, an intractable impediment to the greatness in America’s very DNA.

For the past few years, Virgil Abloh has been doing something of a Tocquevillian reverse-commute. Anointed creative director of fabled French fashion label Louis Vuitton’s menswear division, the Illinois-native has tried to export America’s greatness to the French heritage brand. Abloh, trained as an architect, cut his teeth working for the current long-shot presidential candidate Kanye West. In the past few years, Abloh has become a fashion wunderkind with a commercial Midas touch. (LV announced their sales revenue had increased by 16 percent one year after Abloh’s appointment.) 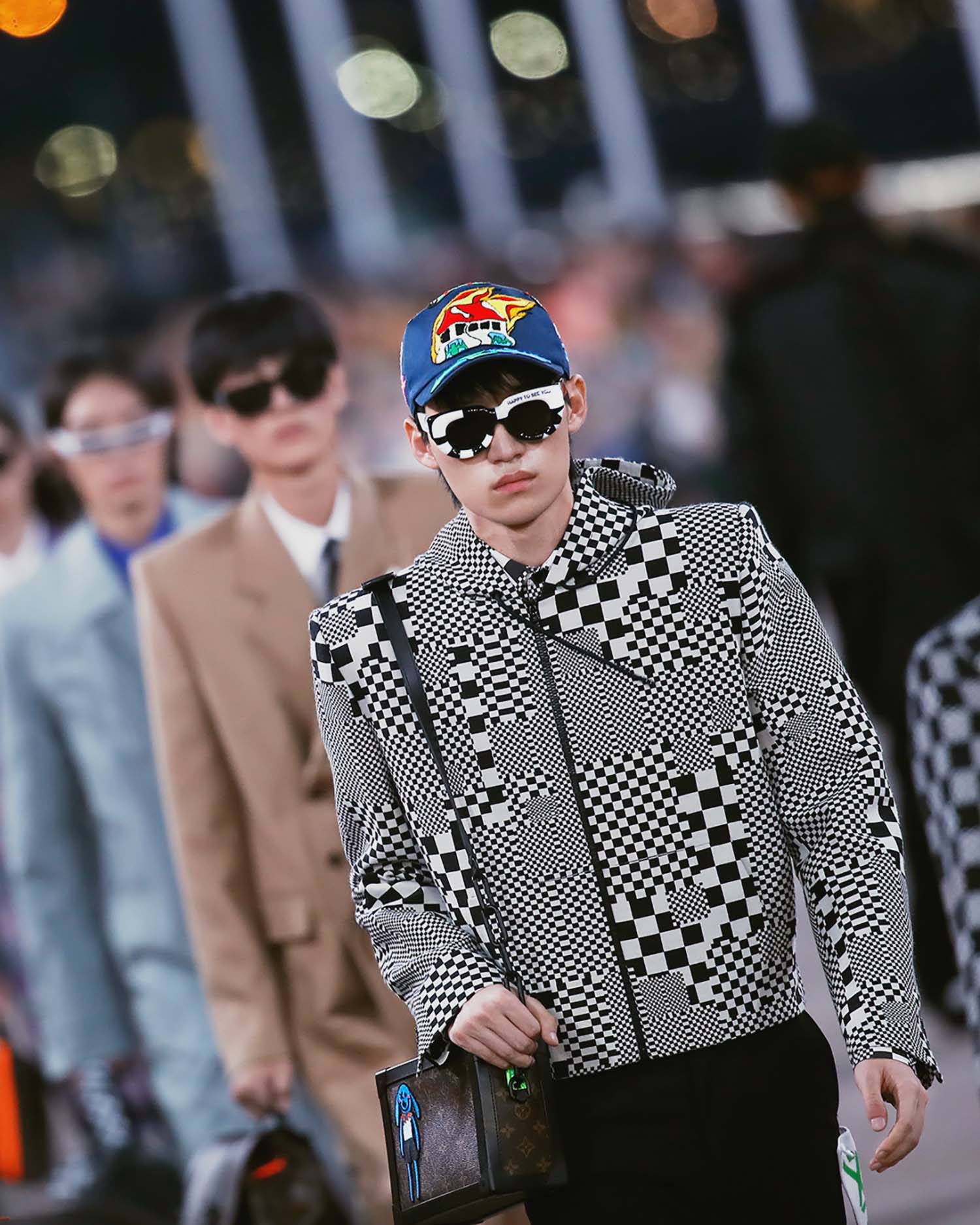 It is not a coincidence that Virgil Abloh finds a meteoric ascendancy amidst America’s political and social, digital transformation. That Abloh arrives to save fashion in the time of Donald Trump is not coincidental; instead, the two are coterminous. Like our president and once-presidential hopefuls, Abloh engages in a sort of fashion populism—that all are welcome to buy his postmodern, deconstructed, reconstructed high fashion sneakers so long as they wait on line. 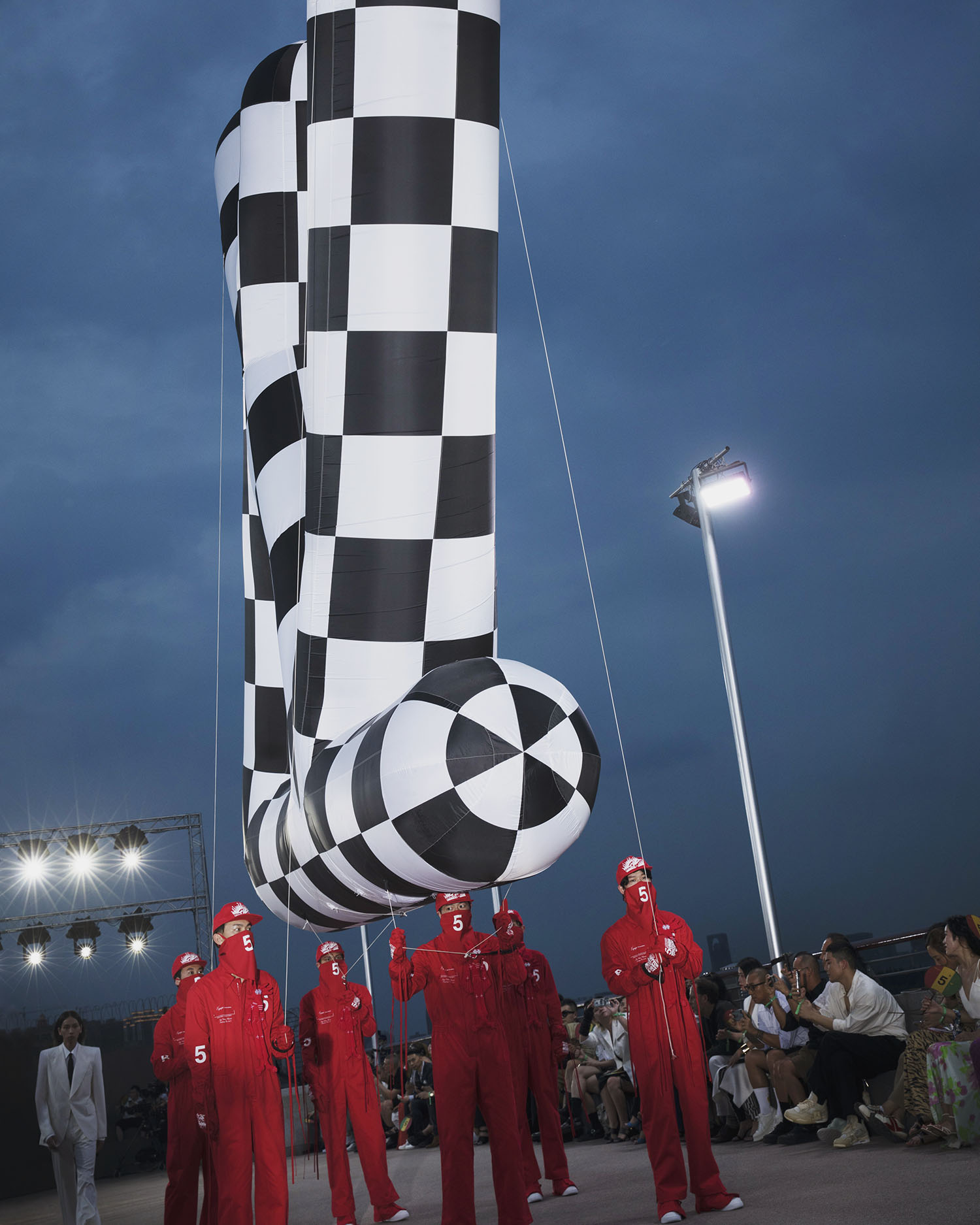 The latest Louis Vuitton Men’s collection is full of mastery, awe, and elegantly restrained showmanship. It is the exciting revelation of fashion world artistry paired with the unbridled joy of the Macy’s Day Parade.

“Ideas—the very foundation of fashion—are no longer disposable,” reads a press release. To that end, the collection’s motifs of patterns and textiles aren’t just a fashion statement, they’re recycled or excess fabrics leftover from the label’s previous collections. In an age when we’re all feeling the haunting specter of coronavirus, Abloh has traded scarcity for artistry. 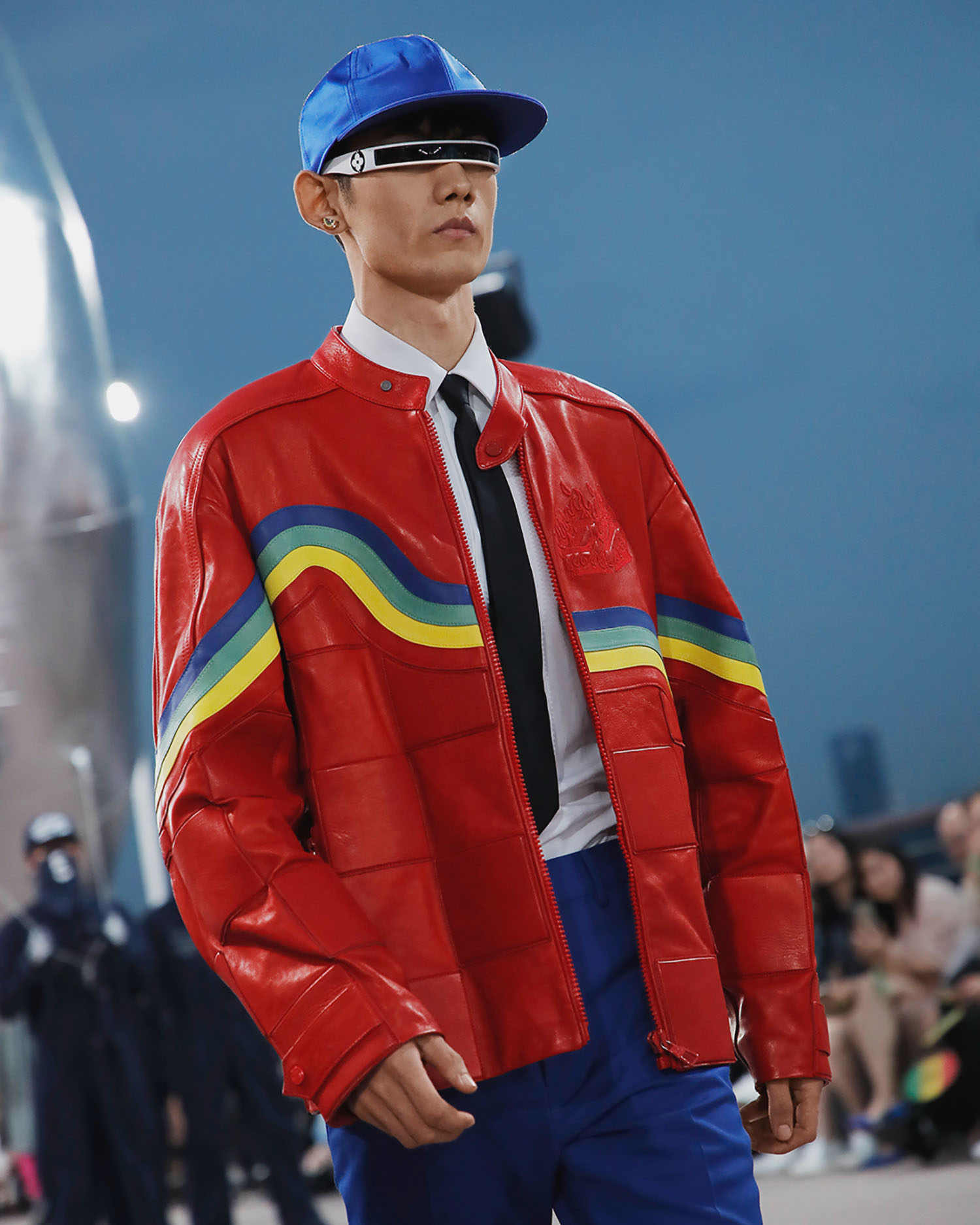 This is arguably Abloh’s finest collection across any brand at any time. Necessity is the mother of all invention, and Abloh has harnessed his most original and creative collection in a time of deep reckoning amidst closed borders and resource shortages.

“You can never go wrong with primary colors,” a friend who live-streamed the show tells me. “These are happy, bright clothes in dark times.”

There’s a universal dialog interplaying throughout the collection and even an exciting tension teeming within some of the looks. The formalist qualities of fine-cut suits are garlanded with plush stuffed animals—comic, even human, relief amid structured clothing lends a democratic air to the collection. 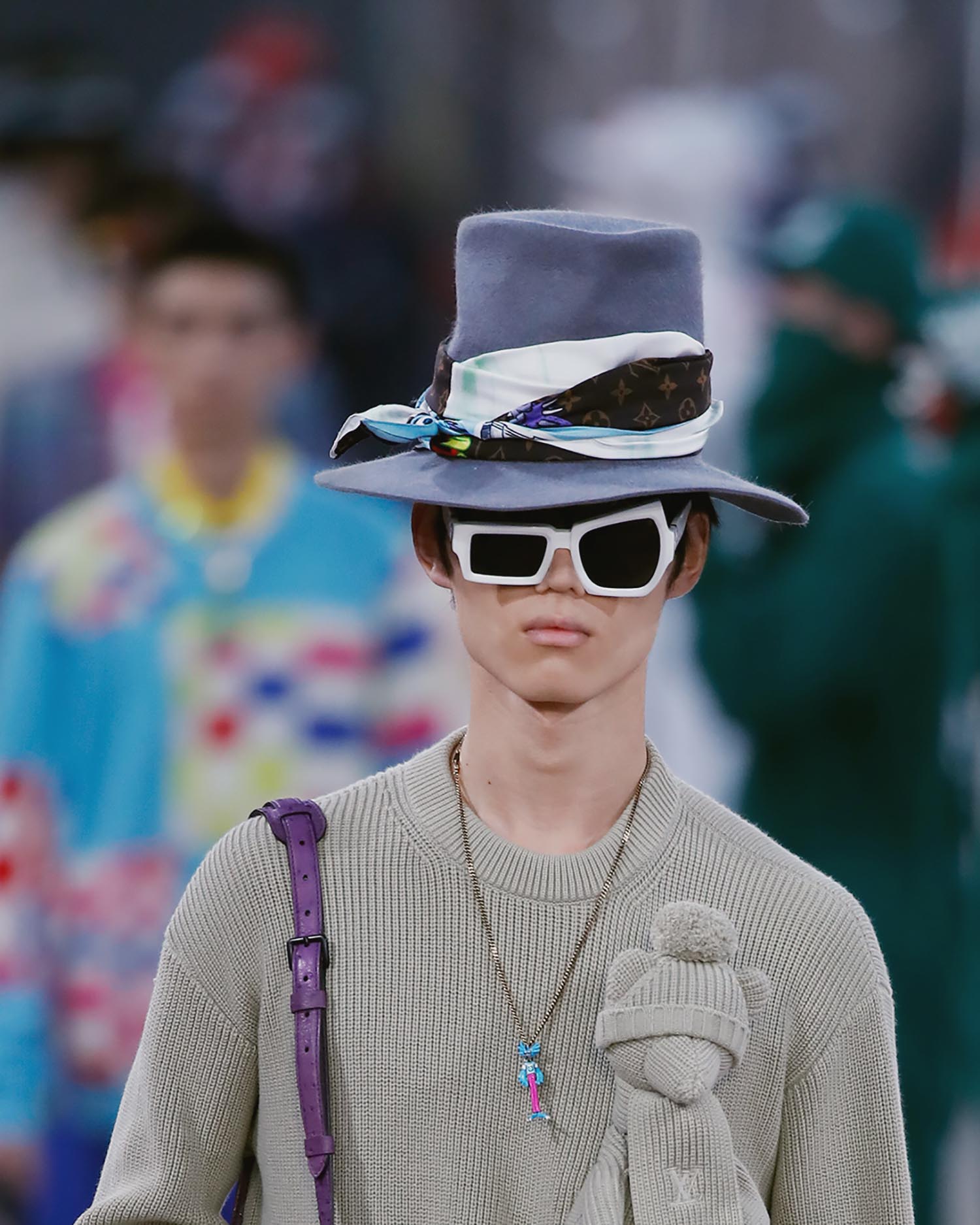 About midway through the show, jumbotrons projected a live-stream Lauryn Hill performance—a welcome (albeit random) anthem to match the show. Hill is as wonderful and mystical as she is elusive; that Virgil was able to broadcast her into public life makes her something of a miracle (and him, a miracle worker). Her presence usually is miraculous.

Alexis de Tocqueville is oft-quoted as saying: “America is great because America is good. If America ever stops being good, it will stop being great.” No one knows the genesis of that quote. Presidents have quoted it. But according to scholars, de Tocqueville never actually said it. It’s just a false attribution floating around in the world. On its premise, it doesn’t even make sense. Just look at Virgil Abloh. He stopped being just good—no more irony, no more Helvetica. Now he’s great. 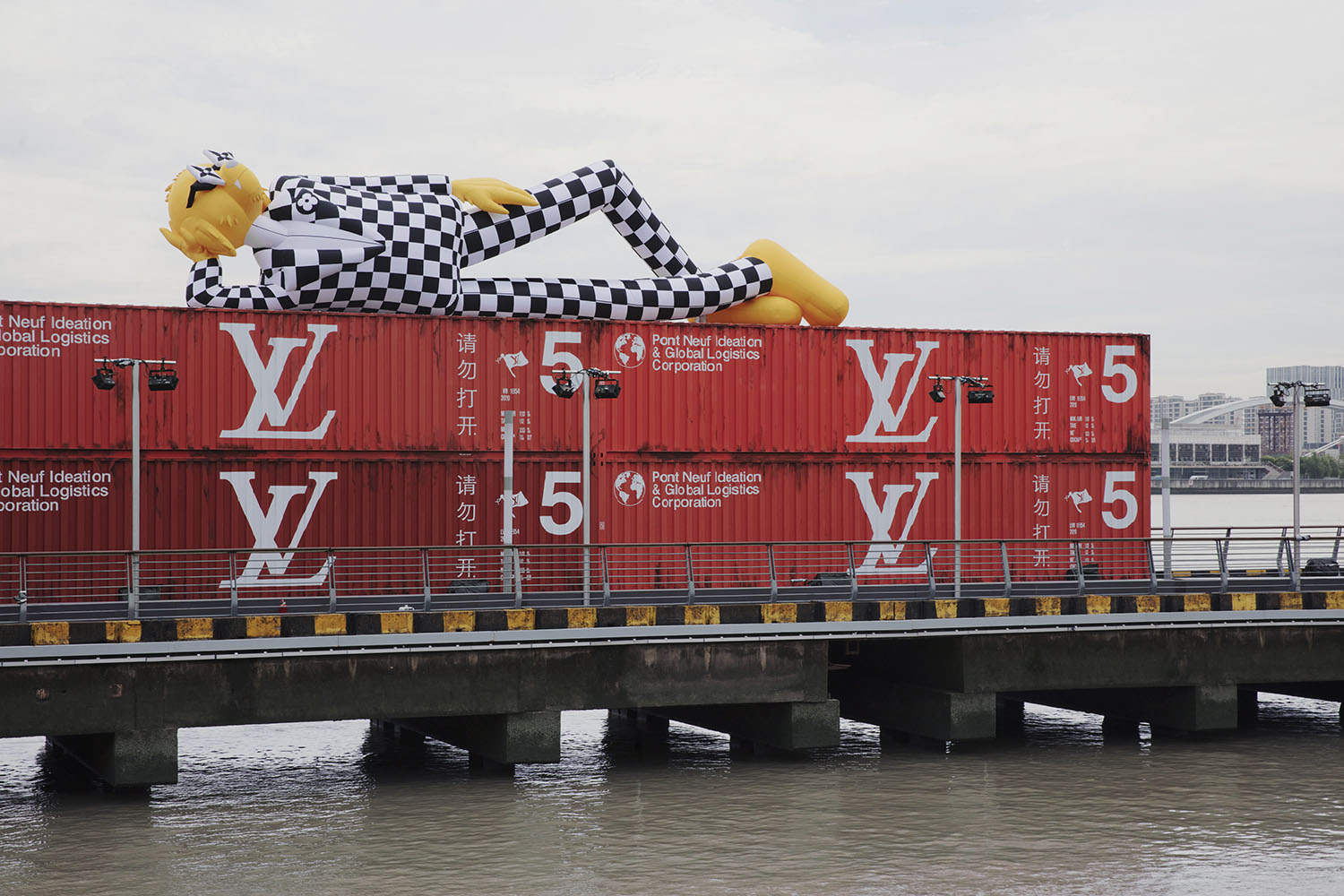