The model and musician explores shared memory, relationships, and a love of old films in her debut video

In her musical debut, 21-year-old model Ellia Coggins works with photographer and close friend Hailey Heaton, 23, to create an ode to the inner workings of shared memory. This music video, “Small,” stars Coggins and another close friend and collaborator, Rose Daniels, and features black and white visuals surrounded by dreamy chords and Coggins’ blissfully melancholic vocals. It explores ideas of closeness, reflection, and the intimacy of relationships—but both Coggins and Heaton emphasize their openness to the viewer’s interpretation: this piece is not meant to prescribe concrete meaning.

Coggins and Heaton decided to work on the video together on a bit of a whim—after a night of brainstorming and discussion, the pair quickly planned a trip from New York City to the Catskills so as to not lose creative momentum. “Small” is their first time collaborating on a video. Heaton’s work as a photographer explores the mutability of formative events through personal perception, and the tone and subject matter of this piece fit into her conceptual world seamlessly. Both artists expand their horizons beyond their typical roles—Coggins’ career as a model means she’s often in front of the camera in still and moving capacities, but the making of “Small” allowed her freedom to explore the independent creative sphere she is beginning to make in relation to her music.

I sat down with the two artists to discuss their quest to create something authentic to them both.

Des Magness: So, what inspired ‘Small’—how did it come to fruition?

Des: Which we are!

Ellia: It was, like, February of 2019, and my friend Seth from back home in Washington just wanted to get together and see what we could think of. He played the guitar, and I kind of just thought of the melody on the spot then we wrote the lyrics together. I think I completely forgot that the piece existed until summer of this year. He sent it to me, like, ‘I just found this, deep in my computer files,’ and I was like, ‘Oh, this is really great!’

Des: Do you think the piece took on new meaning for you? It’s interesting to come up with a song and rediscover it after that much time.

Ellia: Listening to it now, I wonder what I was going through not to write those lyrics, necessarily, but to sing the way I did. The way I sang it was more emotional than the lyrics to me.

Des: Do you think you brought that same feeling back when you recorded it this time? Does it have a similar connection for you?

Ellia: I think so. With making the video too, we all sort of channeled something inside of us, and it worked perfectly together. 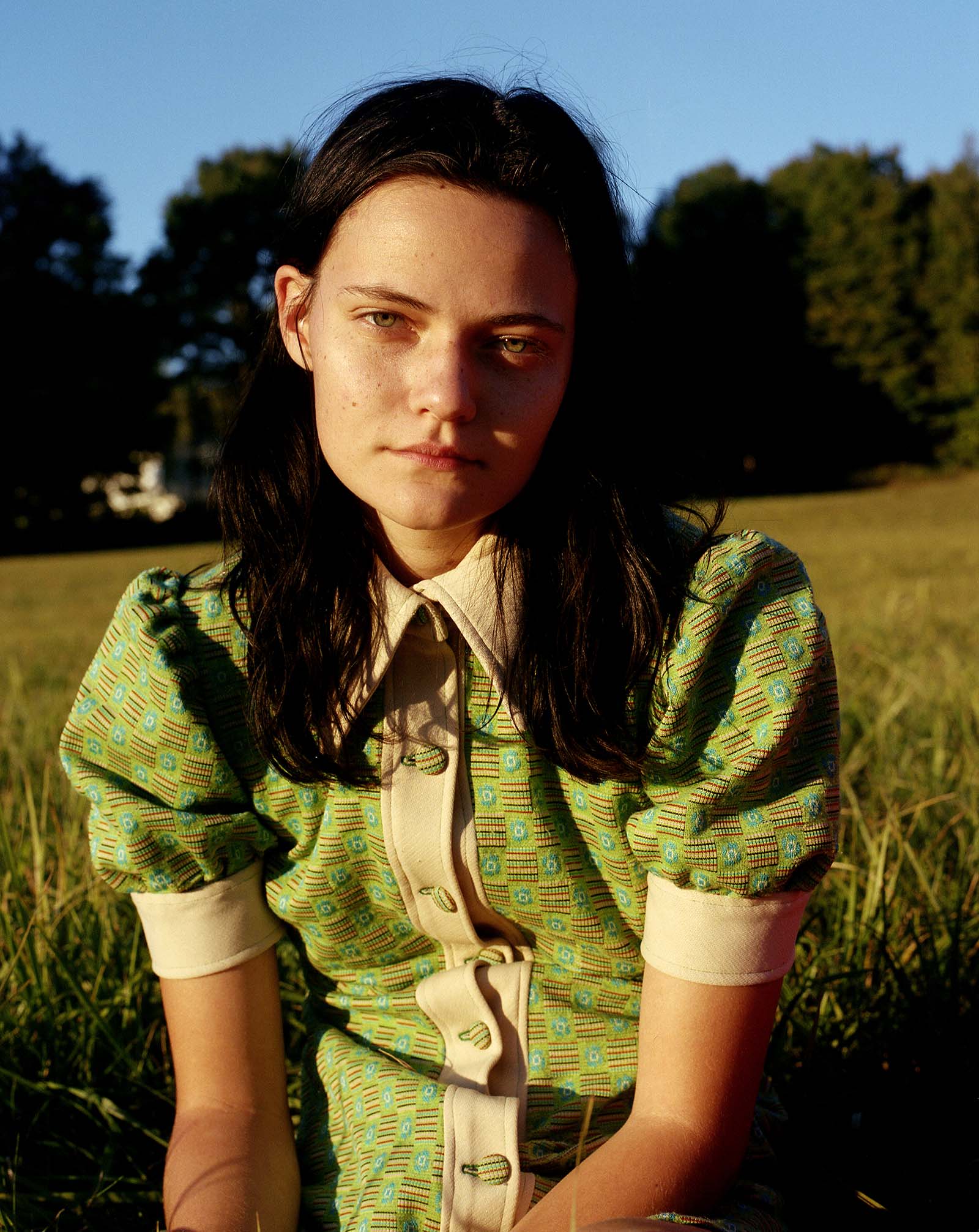 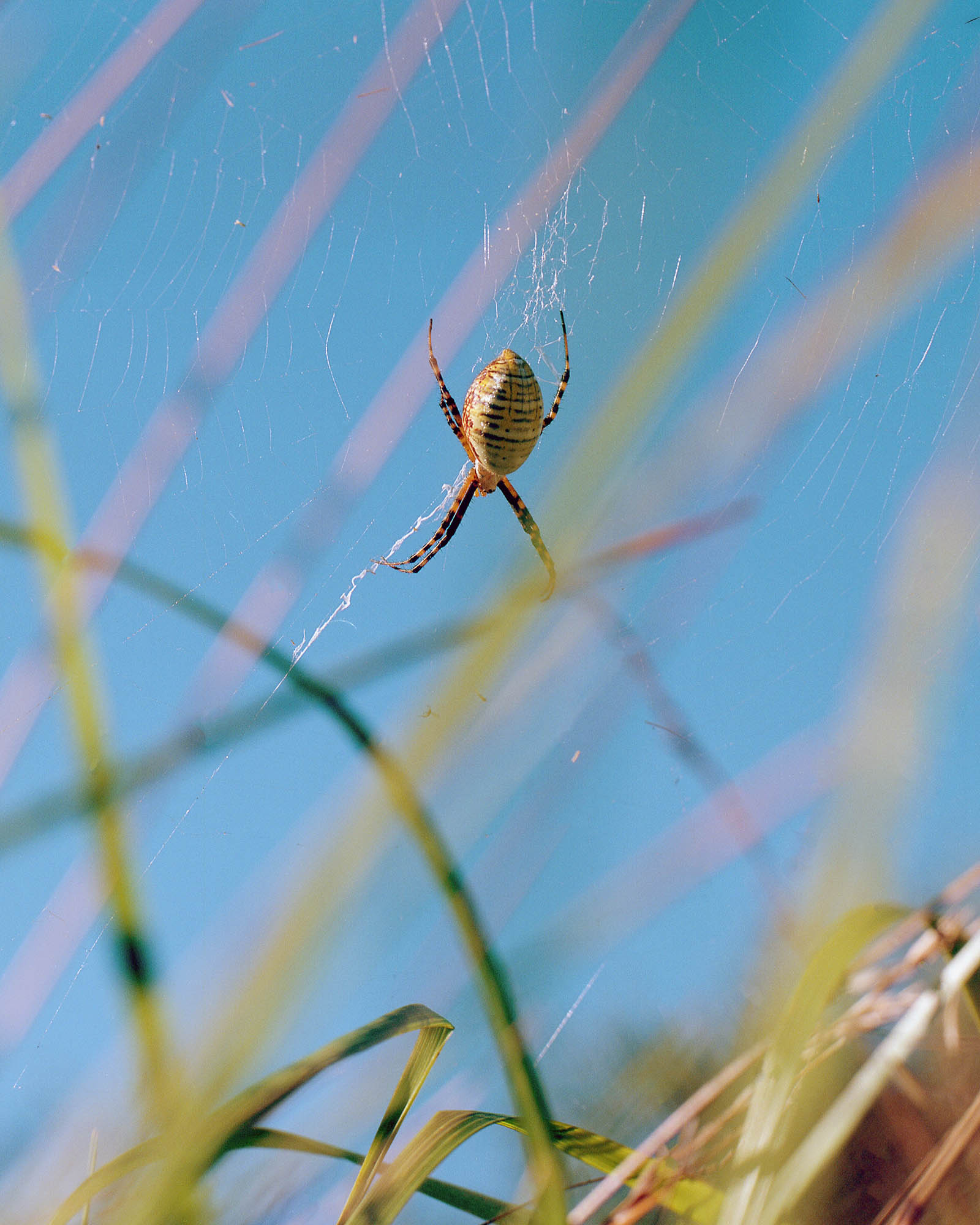 Des: What capacity had you and Hailey worked together before this? How was it as close friends to make something so creatively personal together?

Ellia: Well, this is our first video together, we had only worked on pictures before.

Hailey Heaton: Yeah—and never for anything super serious, just whenever we’d go on trips or hang out.

Ellia: It always happened very naturally. I think our other work together was good practice–that’s what made shooting this so easy. There was no stressful part!

Hailey: Except when the 16mm camera broke [both laugh].

Des: What was behind your decision to shoot the video on film?

Hailey: Just the quality of it–I think there’s something about it looking like an old movie. All I do is watch old black and white movies, I love them. I always knew how I wanted the video to look.

Ellia: I feel like that was one of the first things we talked about when we discussed the idea–definitely shooting it on film.

Des: Who’s idea initially was it to make this piece together?

Hailey: I think it happened pretty naturally. We were planning to head upstate to take some photographs, but it turned into us listening to Ellia’s music one night and talking about it for a really long time, and then we were like–let’s do it! I had wanted to make a video for a year or so, and when Ellia showed me her music, it sort of came together. I had written down all our ideas, and I think we were just riding this high of the excitement of having figured something out. We pretty much planned it all in a couple of days.

Ellia: We really didn’t want the energy to fizzle out. That happens so often. 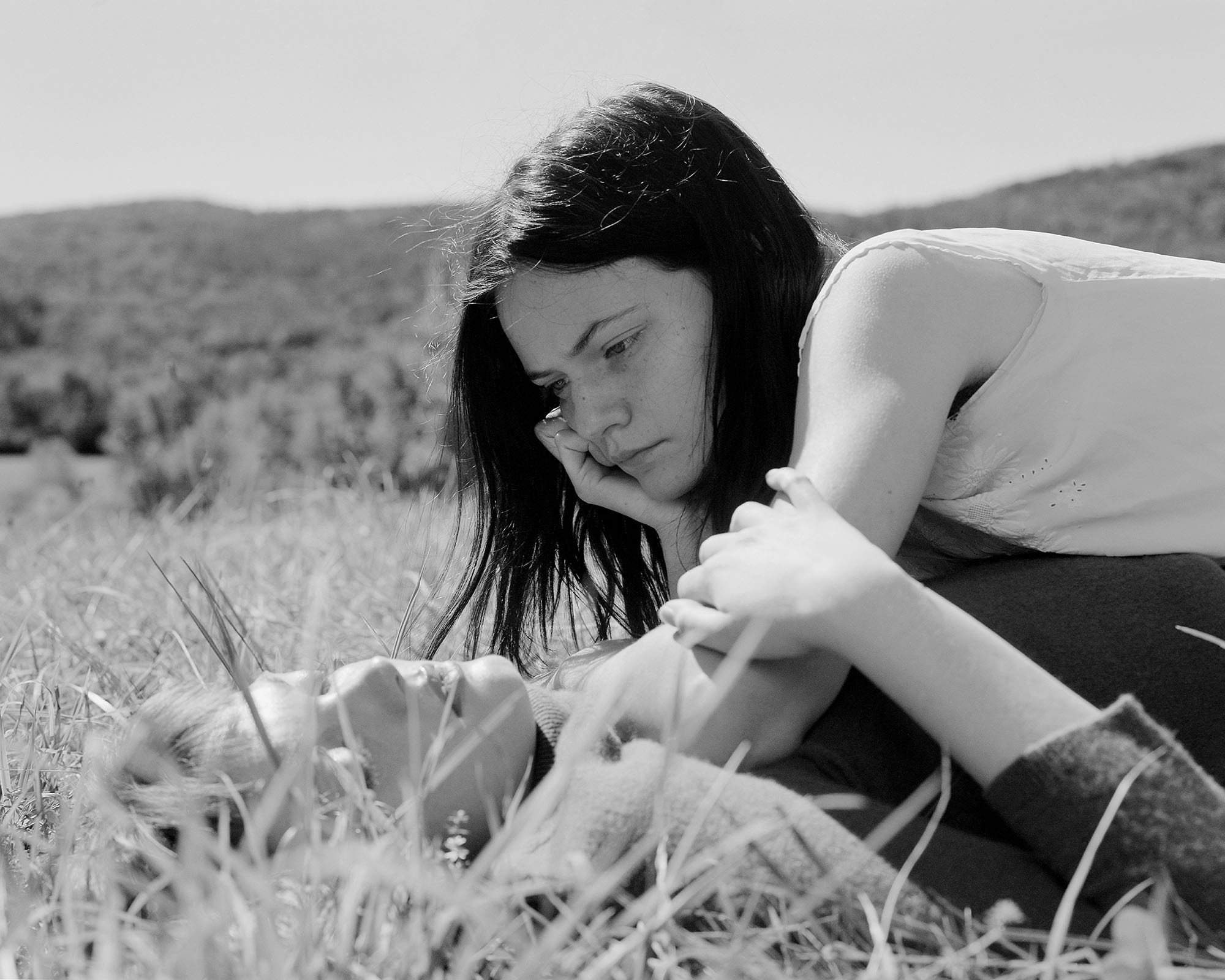 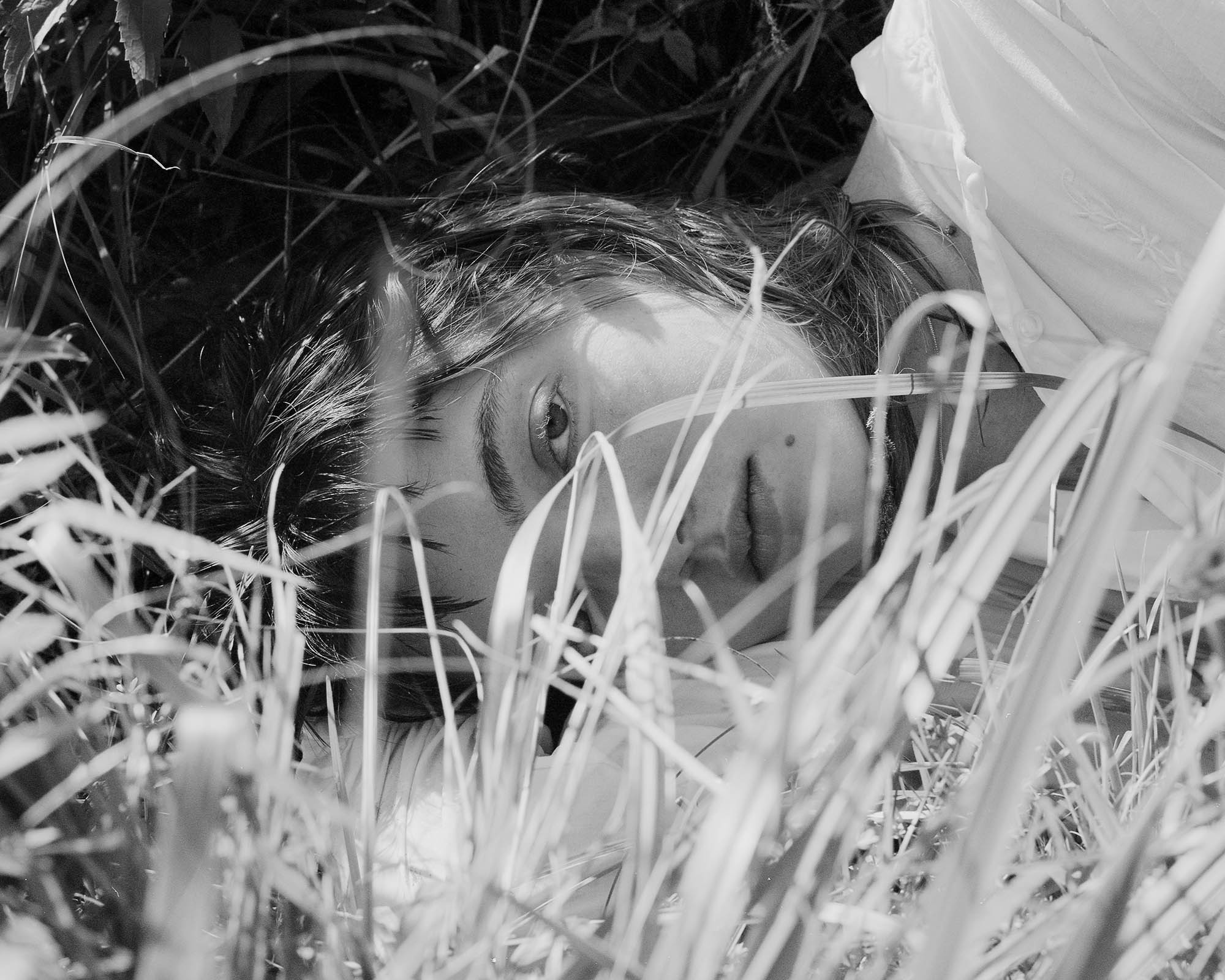 Des: When you were in the brainstorming phase, what were you looking to as inspiration for the mood of the piece?

Hailey: Definitely old movies, I referenced Ivan’s Childhood by Andrei Tarkovsky, Sátántangó by Bela Tarr, and Wild Strawberries by Ingmar Bergman. But mostly movie trailers. I don’t find most music videos inspiring unless they’re older, more classic videos. I find a lot of modern videos clunky, they can take over the song…My favorite videos are usually just one shot, or really long takes. I guess we sort of approached ‘Small’ like a short film, but it ended up being pretty simple.

Des: ‘Small’ felt like it was potentially about memory. The nostalgia of reflecting on a feeling–joy, pain, whatever it may be.

Hailey: All my photographic work is about memory. I think it must have come out in a very subconscious way. All my work is about how you look back on something–how you internalize trauma, how you remember it, how it changes over time. How your memory is not always reliable.

Des: What about the music? Was there some of that concept within the song itself?

Ellia: Hearing it for the first time again, a year after making it, it encapsulates that. I don’t know how I was feeling when I initially recorded it–I don’t remember what was going on that day, what I did, what was happening in my life. I can only speculate on what that song makes me feel.

Des: What is your other music about? Do you have a larger framework, conceptually?

Ellia: It’s very sporadic for me. It’s not often that I can create a full song. I have a few songs that aren’t recorded in full yet–that have a similar mood, similar feeling. Very soft, only guitar and vocals.

Des: Do you usually make music with friends?

Ellia: I usually play guitar myself, but I only know simple chords, so sometimes I’ll play with other people, but it can be hard for me to get completely comfortable making music with other people. I thrive, and am the most creative, when I’m on my own–but I’m held back by only knowing a certain amount on the guitar. It’s hard trying to find the balance.

Des: As of now, do you have any specific aspirations as a musician?

Ellia: At the moment, no–this is all really new for me. I never thought I’d be able to release music, let alone create a music video. So at the moment, I’m kind of just like, ‘Lay it on me!’ See what happens next.