Edgar Heap of Birds reveals the profound importance of the collective

For many, the rupture of crisis has ‘put things into perspective,’ prompting a reevaluation of priorities. Not so for multidisciplinary artist Edgar Heap of Birds, who has long recognized the precarious and expansive nature of life. “The tribes have always been about the collective, the seasons, the water, and the plants,” he says on his reaction to the pandemic. As an advocate for indigenous communities, he seeks to affirm these Native values through his artistic practice—in both times of crisis and relative stability.

This pursuit is manifest in the artist’s Places of Healing, a 48-piece mono print installation. Comprising 24 sheets and 24 corresponding ghost prints, the series catalogs the Native names of ceremonial sites throughout the United States. For its 16th issue, Document has included one of these prints—listing sites in South Dakota, Hawaii, Washington, New Mexico, Alaska, and California—in a run of limited edition artist covers created in response to  COVID-19. Here, Edgar discusses Places of Healing, bridging its exacting technicality with the interplay of removal and renewal that is characteristic of Native life.

Caroline Reagan: Why did you choose this medium?

Edgar Heap of Birds: I used a process called viscosity printing. It’s specific to the environment: moisture, altitude, weather. The oil that I used to paint the work is painted backwards on a clear plate. It’s a chemical process, but it allows for a lot of independent movement from the art itself. I’ve been doing this for 20 years with Michael McCabe who runs Fourth Dimension, an art studio in Santa Fe. He’s a Native American Navajo nation member. It’s been a good marriage of conceptual basis and diaristic practice.

Caroline: Could you speak a bit more about the ‘ghost’ element of the ghost print?

Edgar: The ghosting is a reference to that experience of how faint Native life is to the non-Native people in this country. But it’s also a technical maneuver where you pull a second print off the same plate without painting it again. The first print is called a primary print, and the second print is called a first ghost, and then you can do a second ghost, third ghost. We’ve also been using different kinds and colors of paper so that the ghost has more variance, which deepens the meaning of how the ghost exists in many different stages of development.

Caroline: Why did you choose to focus on text for this piece?

Edgar: I use text a lot with my public art. It’s good as resistance to a political discourse of Native life issues. Text is good to articulate that; it gets into the psyche of the viewer quickly. They can’t quite look away or not internalize it.

It comes from my experience with graduate school in Philadelphia. One of my professors said that they were resistant to any kind of Native discourse and political issues concerning indigenous people. I discovered that nobody really cared about that. So, I started making a lot of text notations. I actually did a lot in the hallways of the graduate painting studio and put them up on bulletin boards. I kind of did a pseudo public art display—ideas with photography and words. Then, I graduated to more artistic, studio-based drawings with text—diaristic large-scale template drawings. And now, I’ve moved into prints, beginning 10-15 years ago.

Caroline: Why did you list the healing places in Native Sovereign language?

Edgar: That’s something to unpack as American citizens. There were all these explorers and colonial leaders who named things after themselves. They converted ceremonial healing places into their own memorials as white men. But all of these places have Native names. My uncle once explained to me that all those rivers from here to Montana have Cheyenne names: the Arkansas River, the Platte River, and the Missouri River.

So, it’s a little bit perplexing when these places are in a Native tongue. I feel like that’s an entrée for the viewer to start to investigate what this place is that I’m talking about. And they actually have to dig for that; they may start getting on their phones and googling the places.

Caroline: How does your artwork address the crisis of pandemic?

Edgar: When you’re stressed, you start to come to grips with what matters. Certainly, you want to be in that state of mind everyday. You don’t have to have a life-threatening experience. You should go visit your grandma and see if she’s okay, take care of the youth, and take care of the elders. That’s how the tribe lives always. Elders are always gathered first at every gathering. So, I think that maybe it’s the time to showcase this.

Overall, the Native tribes and nations are very thankful. Every day is fragile; every day is a gift. It’s just a matter of priorities. Again, it’s a really silly generalization, but the individual doesn’t matter, the collective matters—it’s the rest of the world, the planet, the universe. So now, that’s going to get a bit more evident. But the tribes have always been about the collective, the seasons, the water, and the plants.

Caroline: Do you feel, then, that the Native tribes were more mentally prepared for the virus?

Edgar: Well, we’ve had a lot of misfortune in Arizona, and that’s my wife’s family, the Navajo people. I’m Cheyenne. We’ve had a lot of loss out there, as you may have noticed in the news. It’s hit them really hard, and it’s still going, still killing people. They never isolated themselves, and they have no water, so they can’t wash their hands. There’s Lake Powell where everyone goes skiing and boating, but they don’t give the water to the native tribes.

So, I don’t know, we’ve been hit with loss, and it hasn’t been easy. But we have a way to pray for these things—we did that immediately, asking other people and leaders to pray for us. We’ve always gone back home, every chance we’ve gotten. We’ve always invested in our community. You gotta have that; I don’t know what else you can believe in.

Caroline: When did you know that your artwork was complete?

Edgar: I have a matrix, a drawing series of each print. I work with sets of four, which is a sacred number to the Cheyenne tribe. My mission was to get 24 messages, and I ghosted each one. I worked on this for quite a while before I went to Santa Fe and printed. I brought all my drawings. I then painted all these plates, painting backwards so that the words came out forwards. It’s very difficult. I painted with oil on a clear plate of glass. And then we ink it up, and the white words resist the ink because they’re oil. I have five different reds, so I can make an interplay with the color, and it’s very visually important to be that heavy—contrasting with what’s next to it—and making it visually engaging when I hang it on a wall.

When you’re a painter you have to accept the painting. You don’t shoehorn it into something. It’s going to be what it wants to be. And to me that’s a Native American perspective, this issue of acceptance. Even with this dire virus, we’ve just got to accept that that’s what’s happening to us. Then, you move on and make some adjustments.

So, the work completes itself. But I hope that there’s enough there in the flex of the piece for there to be some openings. That’s what I’ve learned in my career as an artist: you don’t want to tie it down too tight; you don’t want to resolve all the issues. You want to leave some cracks of the door open, so that people can enter it and make their own interpretation. That’s my perspective: it’s not totally finished with the artist, the viewer finishes it by engaging with it.

Caroline: What can people learn from these healing places?

Edgar: Hopefully they can learn that there’s a whole foundation under our feet that’s earth-based and indigenous. New York City and LA are not the primary experiences we should always focus on. There are thousands of different nations with their own languages and healing places.

Healing places for tribes in the prairies, like the Cheyenne and the Sioux, are often assaulted by business, oil drilling, water rights, and tourism. If people knew where these places are, they might want to protect them. And then use them for their own healing and understand what they’re for and how they exist—their geographic location under the sky, the movement of the sun, the solstice and equinox. They’re for prayer and healing; they’re not just an iconic memorial or idol. They’re actually functioning tools. Like I’m sure that with the pandemic there are people praying all over, everyday.

Caroline: Is there anything else you would like to add?

Edgar: We all hope that all the citizens of this nation can gain respect for nature—even the nature in their own bodies. New York City’s so tiny and so fleeting; even the population is miniscule in comparison to what the earth really is. So, prioritize where we are and respect the Native ways, which are everywhere—from Florida to Oregon to Alaska. 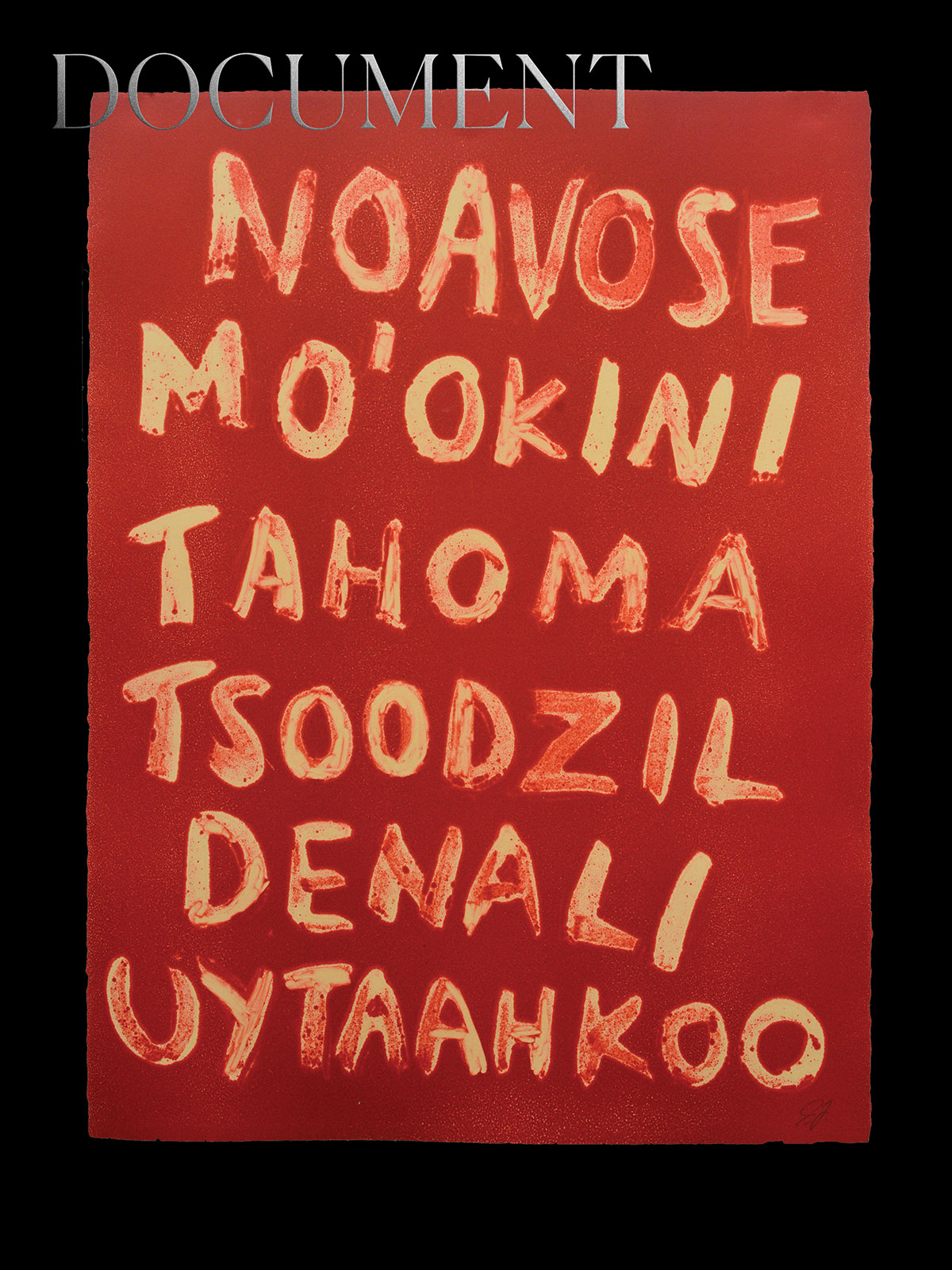