Sophia Fish aptly titled her burgeoning label So Far—a deft play on words that not only incorporates her initials, but also indicates the geographic location of the line’s conception. Though she is now New York based, Fish began So Far while living in the remote desert landscape of Marfa, Texas. Without access to the trappings of big city life, the designer immersed herself within the natural environment, imbuing her clothing with Texan splendor.

‘So Far’ also conveys the optimism and patience with which Fish guides her brand’s development. When the designer invited Document into her apartment/work space in early March, she spoke about newly acquired sewing and textile skills with infectious zeal, sharing samples of impressionistic ice-dyed fabrics and bamboo knits with strategically located cutouts. She was quick to bring up her friends and collaborators—including Ashley Rowe, Claire Mckinney, and Adinah Dancyger—whose expertise and perspectives have helped fuel her curiosity. Evidently, Fish finds ample joy within the creative process itself, trusting that So Far will grow organically; “there is more to come,” she said, smiling warmly. 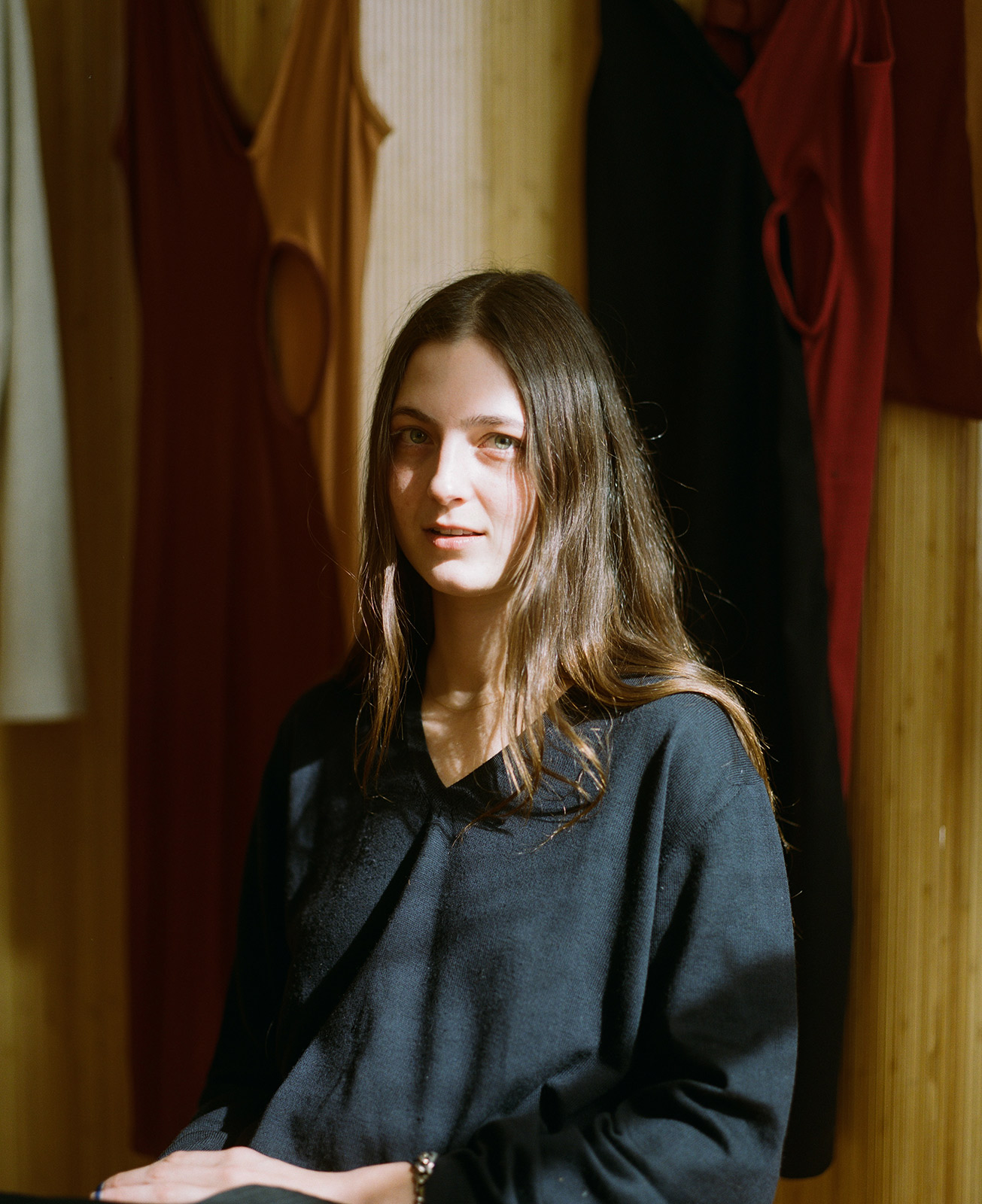 Caroline Reagan: How did you get your start in fashion design?

Sophia Fish: I was in a graduate program for journalism at UC Berkeley, and I dropped out after a year because all I wanted to do was make clothes. I had this opportunity to work for a clothing designer in Marfa, Texas named Ashley Rowe. It was supposed to be just a summer gig, and I had intended on going back to school, but I ended up staying a whole year. During the day, I’d be at her studio working on her things. In the evenings, I had set up a little studio at home, and I started making my own clothes.

I also worked for Constance and Jamey Garza, who have a furniture and textile company called Garza Marfa. Constance and I got very close. She used to dye a lot of fabrics and gave me a giant box of fabric dyes. I had never worked with dyes before, but in Marfa there’s so much space that you can do it outside. I invited some friends over, and we started dyeing fabrics. That was my initial experimentation with textiles, and I ended up making clothing from the fabrics that we dyed. So, design was always an after hours hobby until I left this program and decided to do it for real.

Caroline: Did you move to New York after the year in Marfa?

Sophia: After being in Marfa, I decided that making clothes was what I wanted to do, but I wanted more experience. So, I applied for an internship at Maryam Nassir Zadeh, and I got the job as an intern for Claire Mckinney, who is the production manager there. They ended up offering me a part-time position there after a few months, and now I work on the production team as Claire’s assistant.

I do my own brand on the side. That was really made possible by Café Forgot, another collaboration that started last summer. I had some friends who were carried in the store, and I reached out to them and ended up giving them some pieces for their August pop up at Larrie on Orchard. It was really successful and fun, and they’ve kept on inviting me back. It’s been the perfect space for me because it’s been a testing ground to see what works and what people like. Vita [Haas] and Lucy [Weisner], the co-founders, are so great. At the end of each pop up month, they always tell me what sold, what didn’t, and what people said when they tried stuff on. 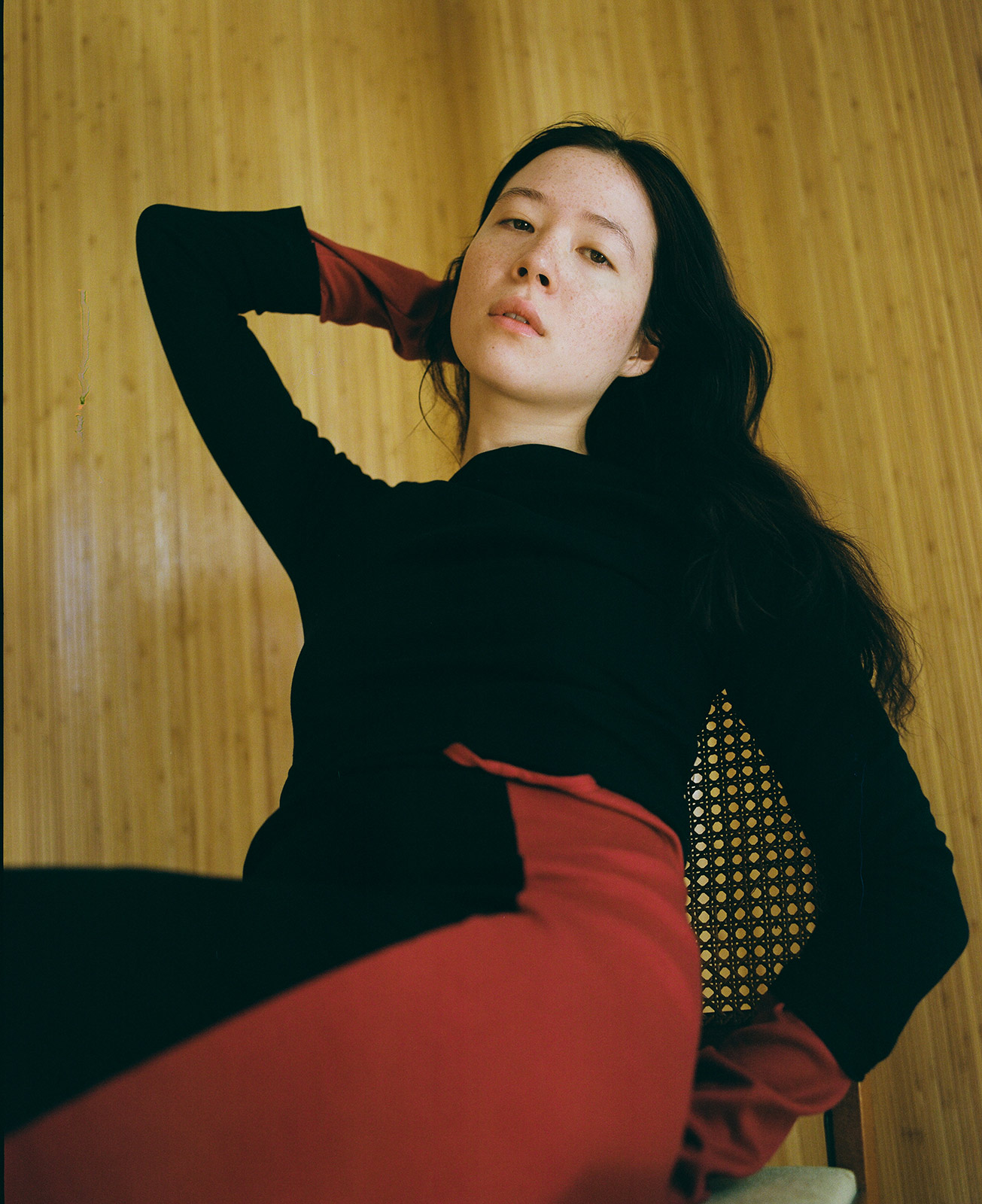 Caroline: Where do you derive inspiration?

Sophia: It’s kind of corny, but when my friends and I were working with the dyes, we selected colors that we could see in the natural environment of West Texas—you know, like the sunset [Laughs]. It was definitely the immediate environment around me that inspired that initial work. More generally, I’m really inspired by other textile artists. There’s this incredible Chilean artist named Cecilia Vicuña who had a show at the Berkeley Art Museum a couple years ago. Then, there’s this other great textile artist, Diedrick Brackens; I saw a show of his last year at the New Museum and was super inspired by so many of his color choices. He had a lot of lavenders and lime greens. I was using more of those bright colors last summer. Recently, I’ve been using these bamboo knits, and those are usually not as vibrantly dyed, but they’re very wearable. I want to make clothes that are for everyday wear—no matter your body type.

Caroline: I definitely get that impression; everything looks really comfortable. Do you have a philosophy of sorts for So Far?

Sophia: I want to make clothes that feel good and are fun to wear and let the individual make it their own, which is why I do the sets. I like that you can mix and match, or you can keep with the same colors. I love the handiwork aspect of it. I love that I’m at this stage where I’m making everything myself. That’s really important to me. As is being really selective about materials.

Caroline: Tell me about the name ‘So Far?’

Sophia: There are a couple things behind it. For one, when I was in Marfa, I felt like I was so fucking far. I was in the middle of nowhere, and making clothing was my outlet. It’s also my initials, SF. It’s also the idea that there is more to come.

Caroline: [Laughs] To be continued! What processes are you drawn to in design? I’ve noticed you do a lot of cut outs, for instance.

Sophia: The cut outs started more as a sewing challenge because it’s not easy to create a perfect binding around a circle. Especially if you’re using stretch fabrics or silks, it gets tricky. I also wanted to add a bit of sexiness. Dyeing fabrics has been a big part of my practice. I’ve also focused on experiments with color and technique and learning about the materiality of different fabrics—how they are composed and how they react to certain factors and elements like sunlight or rain. There was one day when my friend and I were dyeing fabric in Marfa, and it was pouring rain out. We thought that we should probably take the fabric inside, but then we decided to just let it rain. We let the environment take over and dictate how things were going to go. That fabric feels completely different than this [bamboo knit], which is very controlled. So, I have these two different modes that go together. 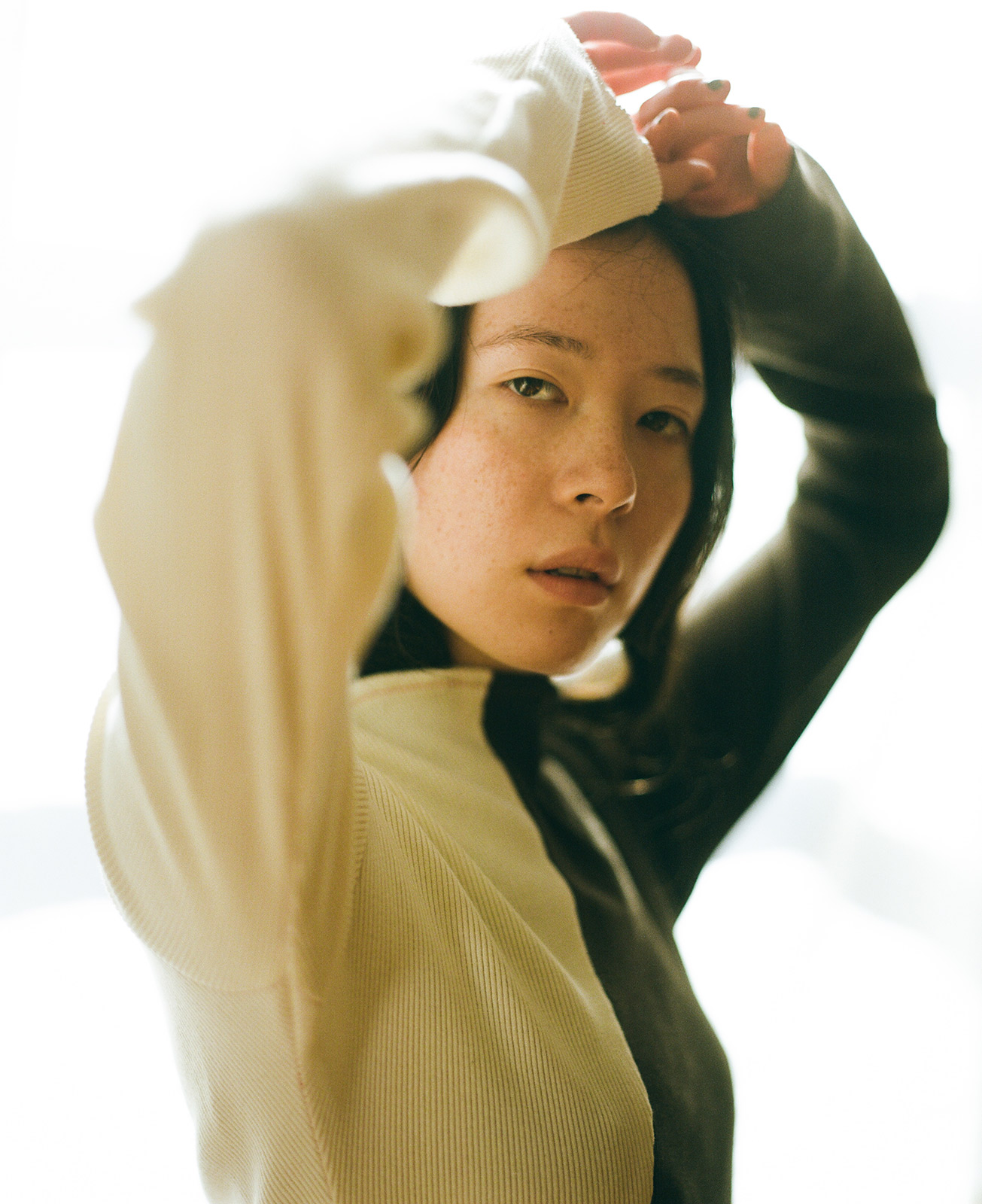 Caroline: Are you self-taught?

Sophia: I didn’t go to design school. I’ve done some training. I did a semester at Central Saint Martins in fashion design, but that was more of a conceptual program. Then, I’ve taken courses: pattern-making at FIT. So, I’m self-taught in the sense that I didn’t get a BA in design, but I’ve really relied on the expertise of close friends of mine. I have a friend, Autie Carlisle, who was a designer at Wang and Proenza and—most recently—Sies Marjan. She is the most talented person I know. She came out to Marfa, and for two weeks, we had a workshop. I owe a lot of my knowledge on design and fit and sewing to her. She is very precise and taught me to be that way with hems and seams.

Caroline: Has Maryam Nassir Zadeh been a big influence on you?

Sophia: Definitely, I’ve always been a huge fan of MNZ. I’ve always followed her work and admired her collections greatly. It’s been such an honor being part of the team. I love the chic, modern, feminine, smart aesthetic that MNZ embodies. I’ve learned a lot on the job there, especially in terms of production—how things are made on a larger scale, working with the pattern makers and the sewers and the graders and the fabric vendors and the leather guy.

Caroline: Can you tell me about the inspiration for this shoot? It was a collaborative effort with some of your friends, right?

Sophia: I really wanted to see how somebody else would interact with the clothes. How would they wear it and style it? So, I let Adinah Dancyger play around and see how it would sit on her body. I didn’t instruct posing; I wanted it to feel like she was living in these clothes. And it really felt like she was! 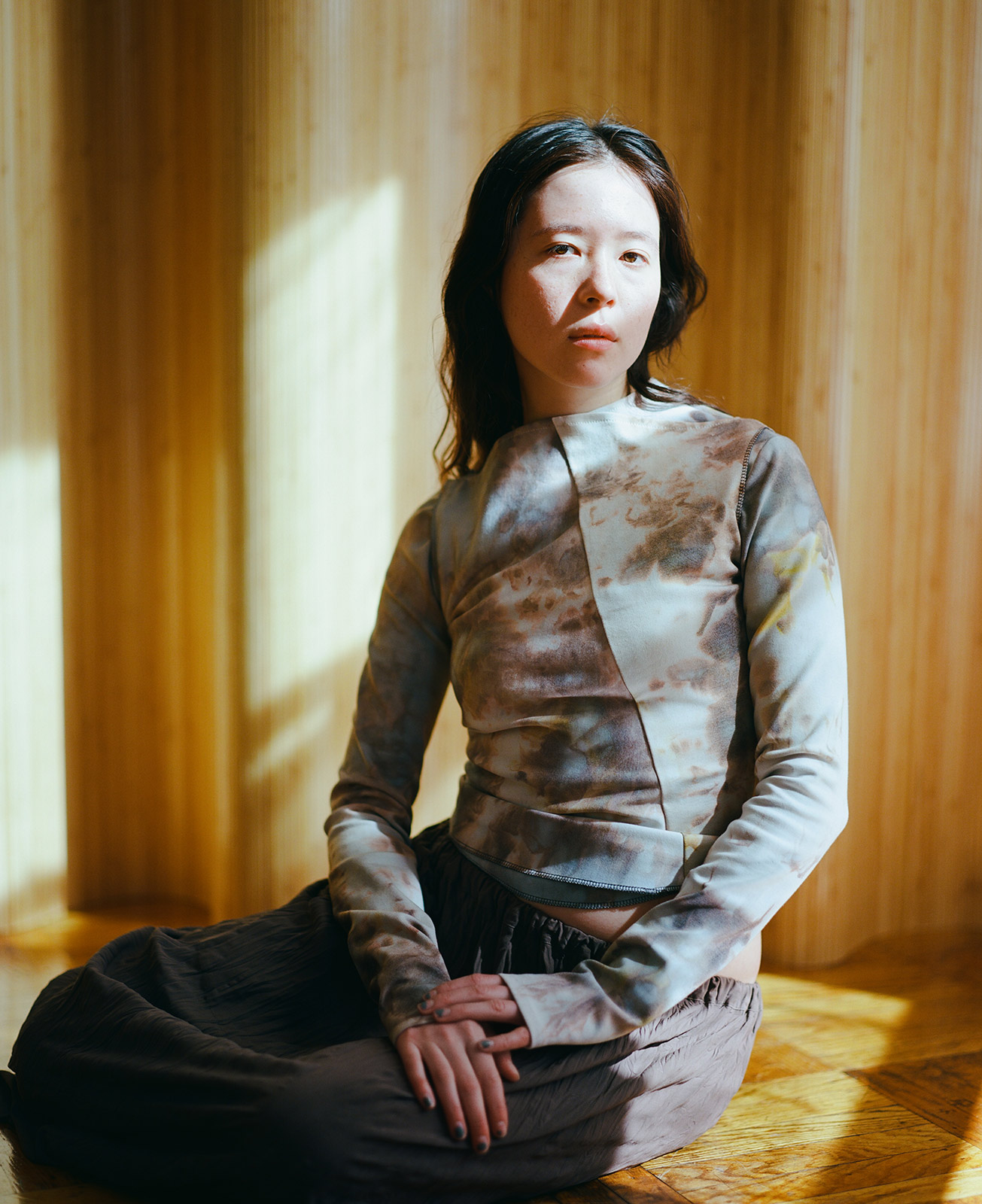 Caroline: It sounds like you’ve benefited a lot from various collaborators.

Sophia: Completely. I think it goes both ways, but, yeah, I owe so much of what I’ve learned to different friendships and collaborations. It’s been such independent work for me because I don’t have a design partner. Instead, I have other types of partners who have influenced me, whether it’s Constance, who gave me the textile dyes, or Autie, who taught me how to do ice dyeing and french seams, or Adinah and my friend Emma Rogers, my two muses who have shown me what it means to wear the clothes. Also, my friend Anthony DeSimone—this incredible musician and painter in Marfa—helped me make the stencil for the labels and spray painted forty of them in an hour in his garage. There are moments like that that I can point to that helped to bring me here.

Caroline: That’s so nice! I have this idea in my head—likely a misconception—that these creative communities don’t really exist anymore, but it seems like they do, in pockets.

Sophia: It’s in pockets, definitely. A lot of people are eager to create together. You don’t necessarily have to be creating the same thing. Autie’s probably the only other clothing designer I’ve worked one-on-one like that. All these other people come from different backgrounds and are in different fields. I’m still seeking it out. There are so many people I want to work with. 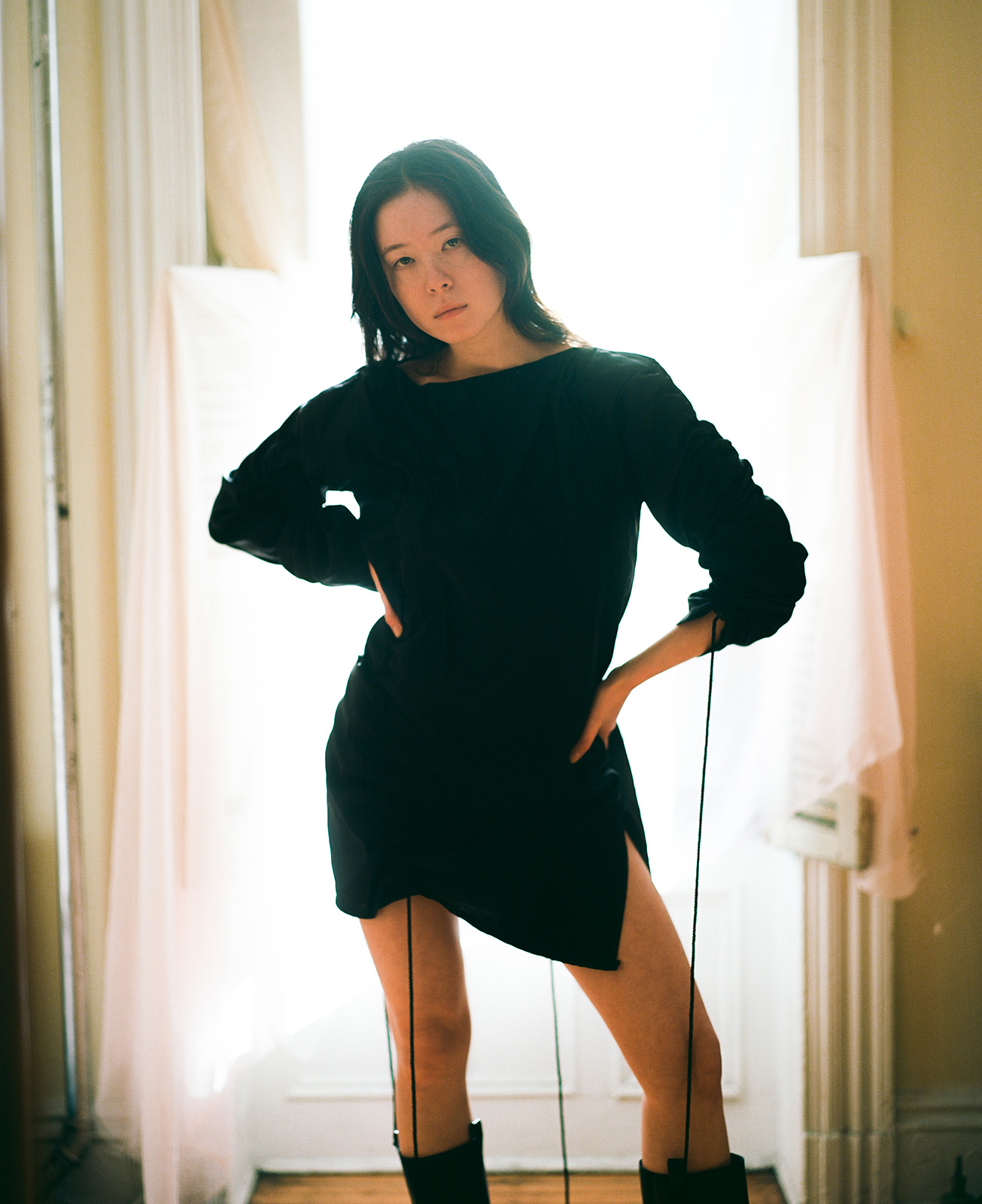