Lucy Weisner and Vita Haas are championing a version of New York that they aspired to growing up. Having met in their high school “fashion club,” founded by Vita and led by Lucy after she graduated, they always had a knack for the sartorial—and not taking it too seriously. Their shop, currently located at 627 East 6th Street, is full of almost entirely bespoke and handmade treasures that they attest to as a design as art practice rather than as fashion with a capital ‘F.’ Document’s Shawn Lakin talked to the two best friends about all things Café Forgot.

Shawn Lakin: How did Café Forgot come to be?

Lucy Weisner: Vita and I went to high school together and college. In high school we were in fashion club together, and then in college we always talked about starting some sort of fashion project, and we didn’t know exactly what form that would take. We were always bouncing around ideas, and when we both moved back to New York, it just fell into place really organically because we had so many friends that were making things, and we really wanted to give them a place to show their work because that’s a hard thing to find when you’re in New York.

Vita Haas: It’s funny, we weren’t super close in high school because Lucy was a year younger, but we became close in college when she came to Reed, the school we both went to, and we both studied Art History.

Shawn: What did fashion club consist of in high school?

Vita: [Laughs] It was basically like, we read magazines and gossiped. I wasn’t really like a good girl in high school. I remember talking to a college counselor and she was like, ‘You should maybe call it ‘Fashion for a Cause,” because we kind of did things for charity, but I was like, no that’s lame; I’m not gonna sell out. 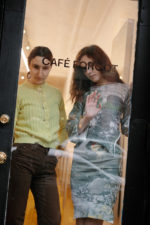 Shawn: So you started fashion club?

Vita: Me and my friend Marland started fashion club, and then Lucy was in it, and took over. It was cool.

Lucy: I feel like I just thought Vita was really cool in high school. I was obsessed, so it was fun to hang out and chat about clothes. We would have these like Christmas dinners that were really fun.

Lucy: Yeah, which is funny because we’re Jewish, but…

Vita: It was like a holiday dinner; we wore cute outfits. We weren’t really popular, neither of us. Well, maybe you were, I don’t want to speak for you. But it was nice to have a place where you felt like you were cool. I wasn’t unpopular, but I felt like I didn’t super fit in, so it was nice to have a little meeting group of girls that were into fashion.

Shawn: Would you say that’s a good analogy for the space you’ve created here?

Vita: Well it’s funny because quite literally, there are a bunch of people that were in fashion club who have their stuff here. Like my best friend Marland Backus, her stuff is over there. I had always wanted to have a shop; that was always my dream, but I was like ‘maybe when I’m 40.’ Like, you can’t just start a shop. When Lucy and I were taking steps to have our first pop up, Marland was definitely the first person I talked to a lot about it for advice, and she also introduced me to Claire [McKinney] and Sophie [Andes Gascon], because they went to school together, so she’s like a Café Forgot mainstay. She’s always had her work in it; part of the reason was I just want to have a shop and carry Marland’s work. And our friend Allegra Sussman was in it, and she takes photos for Café Forgot sometimes. Piera Bochner, Lucy’s closest friend, makes the candles. So growing up in New York is definitely expanded, and now have people from Australia. 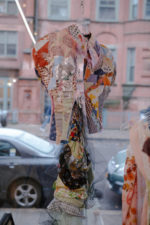 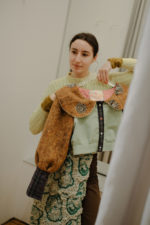 Shawn: Where’d the name come from?

Shawn: What is the color?

Shawn: How’d you find it?

Lucy: I think we were just like looking through names. We were talking around a lot of ideas, and we were like, let’s just look at nail polish colors, and then that felt like it really stuck. I feel like, now, in retrospect, it makes so much sense with the whole sort of nature of the project.

Vita: Now I’m like, it’s perfect. It’s like café, a meeting point, and forgot, like the ephemeral. But when we first did it I was like, ‘this is a bad name.’ I remember texting my friend Lauren who has a vintage shop called Mirth. I was like, ‘What do you think of these five names.’ And she was like, ‘I don’t like any of them, but Café Forgot is the best. But it’s also really bad.’

Shawn: Who is your dream customer?

Vita: I would love her. I’m obsessed with Sky Ferreira.

Lucy: I would be into Helena Bonham Carter; I really want to see her try on all these crazy clothes.

Vita: I love Kathleen Hanna, Pamela Anderson’s style is currently so chic; she can come. Whose is chic?

Lucy: I have a really big crush on Shia Labeouf; I want him to come.

Shawn: There’s a really instinctual quality to everything you have in the store; what are you looking for when you bring designers into the shop?

Vita: I think it’s interesting because most of the designers we bring in don’t use typical production methods and use design as more of an artistic practice. It is very self selecting in that regard, but I definitely think it has a very DIY feel, without being too DIY. Recently, there has been a lot of natural dye pieces, and a lot of people do upcycling as it is more economical and more sustainable. It’s really appealing to me too that these fabrics or textiles have lived a life prior to being apart of this garment, feels like a nice narrative to attach to a piece of clothing.

Shawn: What would you get for each other out of everything in the store as a present?

Lucy: I want to get Vita, we have these Rebekah Bide pieces; it’s a new designer we just started carrying, and maybe this is kind of weird and creepy, but I really want to get her one of these giant heart lockets that we have. I just love her so much, and I want to put a picture of myself in it. Isn’t that kind of creepy?

Vita: Why would I think that’s creepy?!

Lucy: These Rebekah Bide lockets are amazing. They’re all made of recycled sterling silver, and she hand casts them. They have this crazy magnetic closure, and they are just super beautiful they feel like these antique objects.

Shawn: Are you going to stay in this space or do you know where you’re going to go next?

Vita: So we actually have this space for a full year, so it’s pretty permanent.We will be open as Café Forgot every other month and in between we will have special programming with other designers where we can showcase their work independently so it will feel more curatorial. 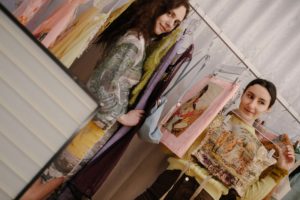 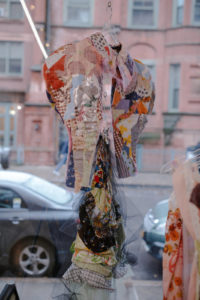 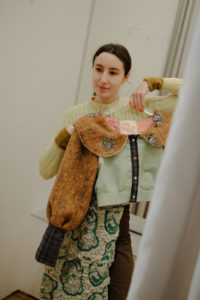 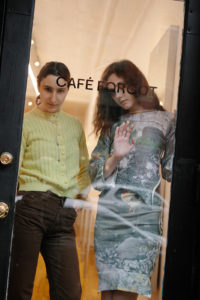