With ‘Sing In A World That's Falling Apart’ the OG garage rock band gets an Americana makeover.

On the album cover for Sing In A World That’s Falling Apart, the latest record from one of garage rock’s ambassadors, the Black Lips, the group is framed by a heart and sits in front of a pastel backdrop. It’s a sweet, if not unexpected choice from a band who’s early onstage stunts included urination and vomiting. On the album cover, the band champions a new, pastoral style reminiscent of vintage folk music and yearbook photos.

“My family had a gospel band in the ’60s and ’70s,” Black Lips frontman Jared Swilley told me while the group was on the New York stop of their latest tour. “The music’s not so great—it’s your typical nerdy, white gospel. But the record covers looked amazing—all the fonts and the layouts,” he continued. The Black Lips have always had that distinct twang that has been passed down through generations of blues-based musicians, but on their newest project, the group not only embraces this aspect of their sound but focuses it. Where previous Black Lips albums played with the concept of eclecticism, Sing In A World That’s Falling Apart is an exercise in the album format and songwriting; it’s an homage to the music that has inspired them.

Jared and Cole [Alexander], the longest running members of the Black Lips are both originally from Georgia, a state that has produced a long line of country, blues, and folk icons such as Little Richard, James Brown, and Ray Charles. Black Lips are their rowdy, crude, and gleeful next of kin. Canadian guitarist Jeff Clarke, drummer Oakley Munson, and saxophonist and vocalist Zumi Rosow are more recent additions to the group, and between them add decades of experience and nuance.

Document spoke to the group about their fashion preferences, showmanship, and that indescribable little twang. 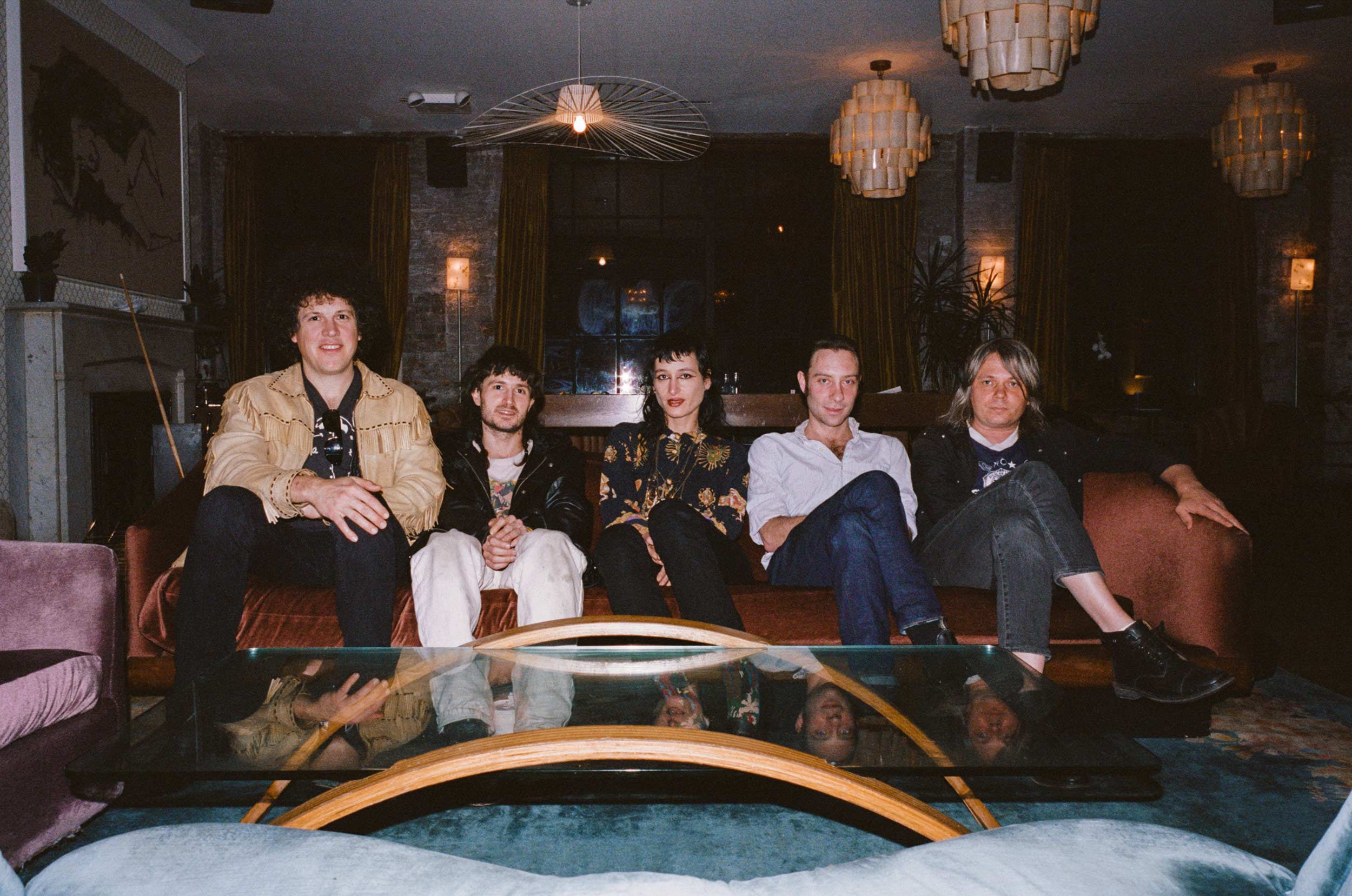 David Brake: What drove you to this new sound?

Cole Alexander: I think it was a coincidence. We’d already been making music in that form. Americana and folk and country are very broad terms. But it’s more specified in one direction. We used to try to be more eclectic, have one psychedelic song, one country song, one bluesy song. This is more on the folkier side.

David: Does fashion interest you?

Cole: Yeah, it personally does. I think even the people in our band that care the least about it probably look better than the average citizen. I’ve always loved thrift store shopping, and there’s a lot of good stuff to find at those. I think image can be important for music. When I first saw The Ramones, they looked cool, so I took them more seriously. I think people let style deeper into their brain and it actually changes the sound of their music.

David: Who are some of your stylistic inspirations?

David: Do you have a big collection of clothes?

Cole: I personally would say I have a big collection of clothes. More that I’m a hoarder. I collect stuff from thrift stores, antique stores, junk stores. I have too many clothes. I buy clothes that don’t even fit me.

David: Do you collect other things?

Cole: Yeah, I’ve been collecting photographs lately. I want to start collecting video tapes. When you go to a thrift store sometimes you’ll just find homemade videos from families. It’s a voyeuristic thing. It’s an under-appreciated medium right now. If you find homemade movies, I think it’s a cool thing to collect. What started my interest is that a friend—we’d go to a thrift store, and he’d always go to the answering machine section—they don’t use them anymore, but he’d always pop out the cassette, because the cassette wouldn’t be for sale, and he didn’t want to buy the answering machine, so he’d just steal the cassette. He had this great collection. They were like soap operas. I remember hearing this wife and her husband breaking up, it was this forty five minute sobbing soap opera.

David: How’s the tour been in general?

Jeff Clarke: Tour’s been really fun. One of Jared’s friends got beat up at the show—that was good.

Jeff: Yeah, it’s a habit I have. I’ve done it for so long that now if I have shoes on I can’t stop thinking about the fact that there’s shoes on my feet.

“Sometimes knowledge can be a burden. I don’t really care who invented rock-n-roll.”

David: What’s been the worst part of this tour?

Jeff: I guess just dealing with food. I ate a chicken roller from a gas station. Not like a 7-Eleven or a gas station you’d know or trust—I think it was called Turkey Hill. I bought a chicken roller there and when you bit it this white cream came out—I felt sick for the rest of the day just at having seen it.

David: What inspires you musically?

Jeff: I’m the only person in the band that doesn’t have a lot of knowledge about art and stuff like that. Zumi grew up in Los Angeles so she was around lots of good music and art and has a well-versed knowledge about the stuff. Cole, Jared, and Oakley are all pretty enthusiastic about the history of music, whereas I’m just kind of ignorant about it. I think that helps me out in a way. Sometimes knowledge can be a burden. I don’t really care who invented rock-n-roll.

Jared Swilley: I’m the only male in my family that’s not a preacher. I grew up in a Southern Gospel Church. That’s where the first place I learned to play music. There’s a lot of country and gospel growing up. Even my grandmother was a clogger, which is a hillbilly tradition of what Appalachian people used to do. The clog dancing along to fiddle music.

David: Was it a strict household growing up?

Jared: No, the type of church I grew up in was one of those crazy speaking-in-tongues churches, and I guess during the ’80s it might have been strict, when I was super young, but it was pretty liberal denomination. My dad actually—he came out of the closet a few years ago. Lost a lot of people, but he always tended to be more on the liberal side. It was never hellfire and brimstone. Never condemning people to hell. It was pretty accepting. My family always dug what I did, ‘cause I’m doing essentially the same thing they’re doing. I’m on stage, they’re on stage, there’s not much difference.

David: You’ve taken on a bunch of different sounds throughout the years. What makes you feel the need to change so frequently?

Jeff: Because we’d get bored. It keeps us interested in what we’re doing, and we like a lot of different stuff. I don’t want to confine ourselves to anything. I’d even make a disco record—I think that would be fun.

David: What do you hope to pass on to the next generation of musicians?

Jared: I think showmanship is a very important thing. My biggest influence growing up was when I’d go to church on a Sunday morning and I’d see these people losing their shit at 9am, alcohol and drug free. I was always like, man if I can get a fraction of this energy into one of our shows… I’m not a great musician but I’d like to think of myself as a better showman. You want to give the people their money’s worth. It’s an escape from the crappy stuff you have to deal with every day. Now, we’re in a cycle now where rock-n-roll isn’t very popular. But it comes and goes. I think pure rock-n-roll won’t ever truly die. 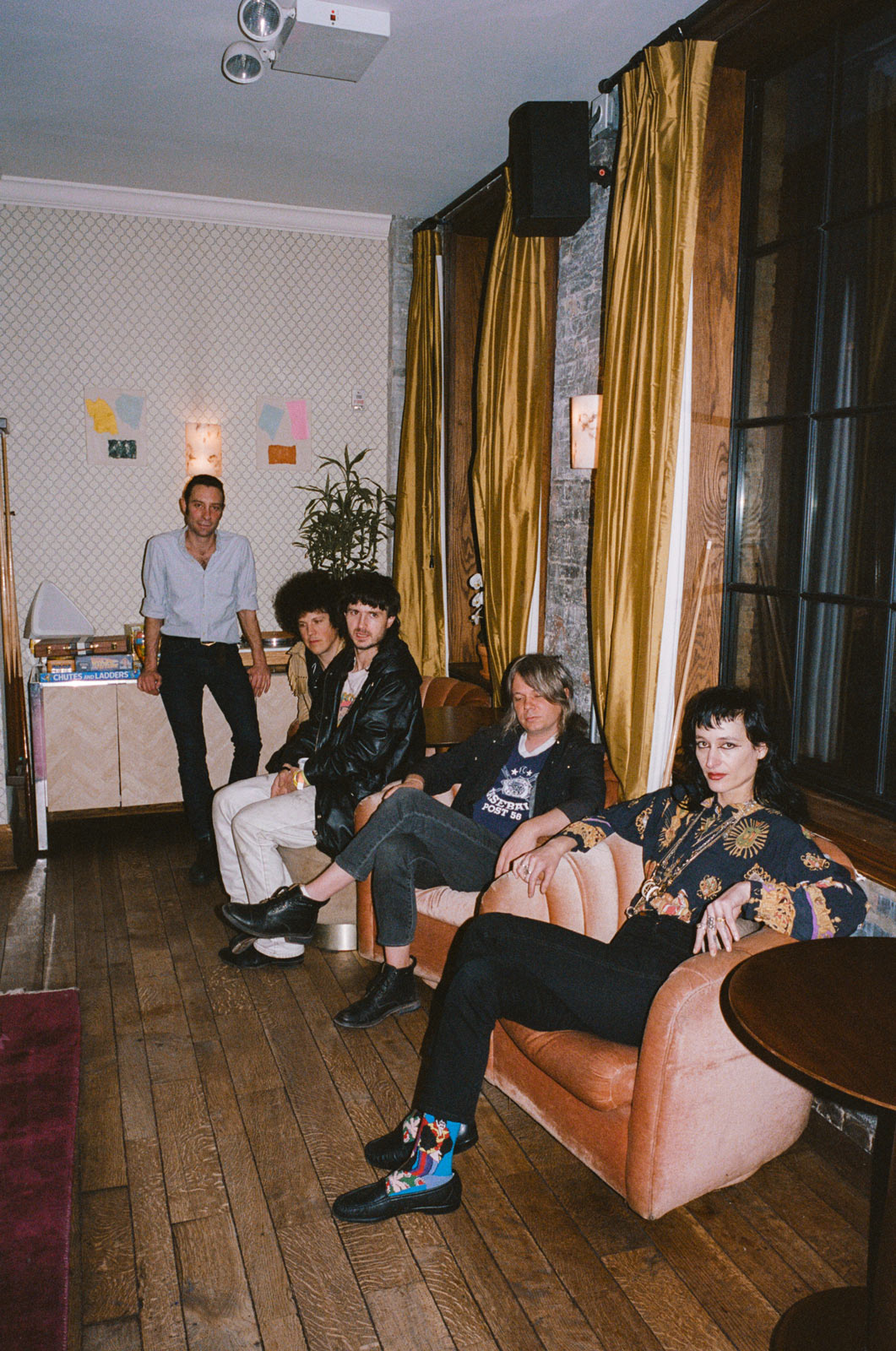 David: How has the industry and scene as a whole changed since you started playing in bands in the ’90s?

Oakley Munson: Well there were a lot more independent record labels. I never even thought about signing a contract or doing anything like that. It was handshake deals and people putting out your 45 and you just go tour on it. You saw the major label thing die down, and now it’s almost come back. I thought labels were gone forever, but it came back to being the same. There’s these major indie labels. That’s what it is now. I miss the days when everyone had their own independent record label so there were more sounds. The Los Angeles sound, the New York sound. That disappeared for a little bit. But at least it’s good people putting out music they care about. But it is structured. It’s more of a business. They figured out how to make some money out of it. Which is good; you can’t do it for nothing. That seemed to be what wiped them all away in the mid-2000s. There’s no point in putting out a record [then].

David: How has fashion played a role in your life?

Oakley: It’s important for me, waking up in the morning. If you feel horrible, you can put on your shoes and jacket and you feel a little bit better. It keeps me together. Not necessarily one style, but if you have a good pair of boots and a good jacket, you’re fine. You don’t need food, you don’t need drugs or cigarettes, if you have those things you can get by for a long time. You get stuck without your good shoes though? It’s gonna be hard to get it together.

David: Who are some of the better-dressed musicians?

David: Where do you find your clothes?

Oakley: Just thrifting, basically. A friend gave me this jacket, and I’ve got to get my boots online. You can’t really find good boots anymore, you have to take a risk on vintage eBay boots. Everything else just comes together, you get a good pair of jeans and you hold on to them for four years—those are your jeans, that’s your jacket.

David: Do you feel like you record better at certain studios than others?

Zumi Rosow: Totally. I think that a place has a vibe to it. Even if it’s recording in your living room. Sometimes that can be magical. In terms of real actual studios, I feel like it makes a difference. There’s the whole history of Valentine—all the energy and ghosts of people that have recorded there have absorbed into the fibers of that place. Energy transfers.

David: How did the collaboration with Gucci come together?

Zumi: It’s kind of insane. I think how it happened is that Alessandro, his right hand woman, I think that she saw me and the Black Lips and they were sort of watching me. They had their eye on me somehow. It’s very surprising to me that I’m an ambassador for this major fashion brand. I love fashion, I love costume, I love the history of dress, I think it really resonates with the way Alessandro is as a person. What he loves about clothes—the anthropology, the history—I connect with that. I’m an individualist, so it makes sense that they saw that in me and because that’s something they [are] luckily championing, at the moment. Unique individuality, and that’s a brave thing to do.

David: How would you design your personal style?

David: What inspires you in fashion? I just noticed even that curtain inspired you.

Zumi: Just go back in time, start at the beginning of time. Everything inspires me. I love the history of dress and adornment. Tassels on curtains—I go crazy for tassels. They make me drool. 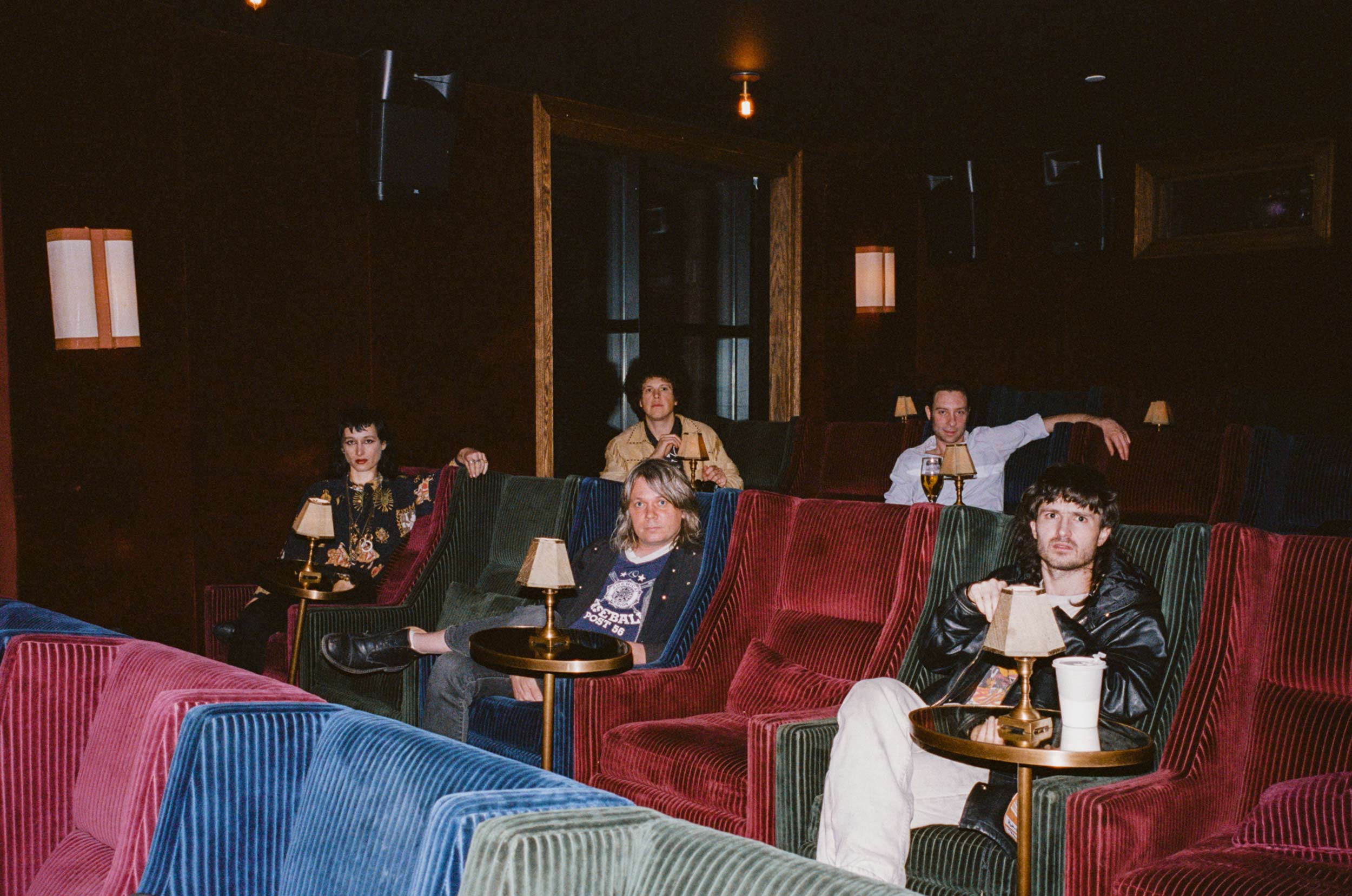