Back in October, I reluctantly met up with my friends at the newly revamped venue, The Broadway. I dragged my feet, preferring to sit at home eating cereal and watching reruns of Curb Your Enthusiasm but figured it wise to tend to the fruits of the garden that is social interaction. We shot the shit, played pool, and bumped into different casts of friends who were splitting time between the bar and the live room. During one of the nexuses between sets, I noticed an older man on his own. He was slim in stature, balding, and looked the spitting image of my lord and savior, Larry David. I was fascinated, and like all millennials, had to document this wild occurrence. He went in to catch the next band and, transfixed, I followed suit. The live room was dark, making it hard to spot my man. In pursuit, I bumped into my friend, Emir. I jokingly explained how I had found my way into the concert. We laughed and the next band started to play. I quickly forgot all about finding Larry, because we were both distracted by the performers.

For someone who plays live music and relies on local engagement and support, I regrettably lack the love for live music that I myself depend on. I am a self-noted hypocrite. But this band was different. They were air-tight, theatrical, fashionable, extreme, and had the best drummer I had seen on a local circuit, if not beyond. I watched the entire set closely, in awe of the intensity and dynamic of their performance. I didn’t know who they were, where they came from, or what exactly I was listening to, but I was a fan. As the show filtered out, I stopped to buy one of their shirts; a thrifted polo with MODEL/ACTRIZ printed across the chest in a white sans serif.

On March 9, just days before SXSW (where they were scheduled to play) was canceled due to the COVID-19 crisis, the band released a new single, “Suntan”—a five-minute track that represents the gravity and intensity of the group’s live set. There are moments that showcase vocalist Cole Haden’s range, there are moments of driving krautrock, and moments that bring to mind industrial techno. And just days before the crisis truly hit New York City, casting the entertainment and service industries into disarray, we met up for dinner at Bushwick’s Yia Yia’s Taverna. We spoke frankly about music and process, but really hit our stride joking around and talking hypotheticals. It was one of the last group outings I had before the onset of a global pandemic and the practice of social distancing. It was a lovely time. 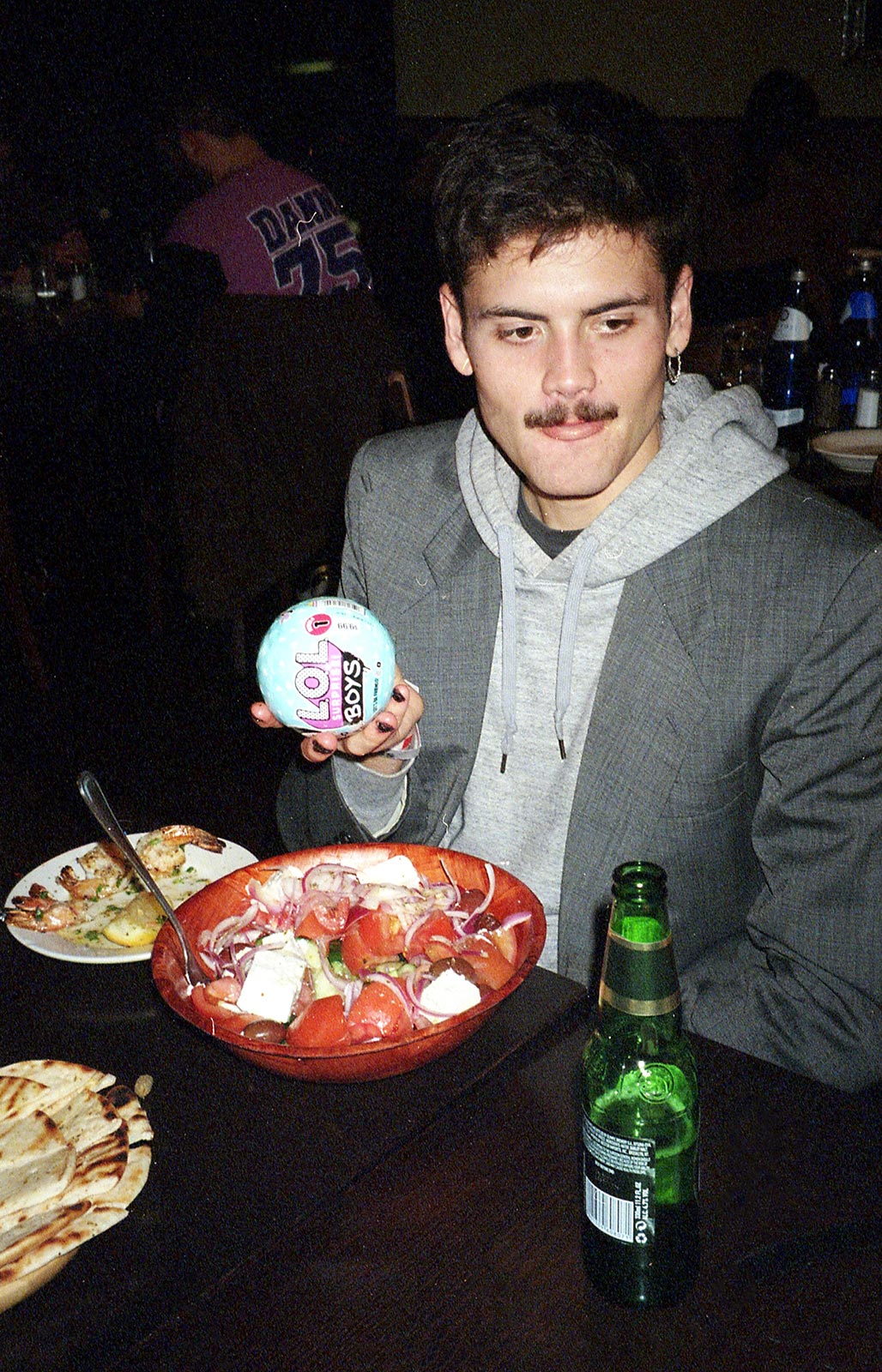 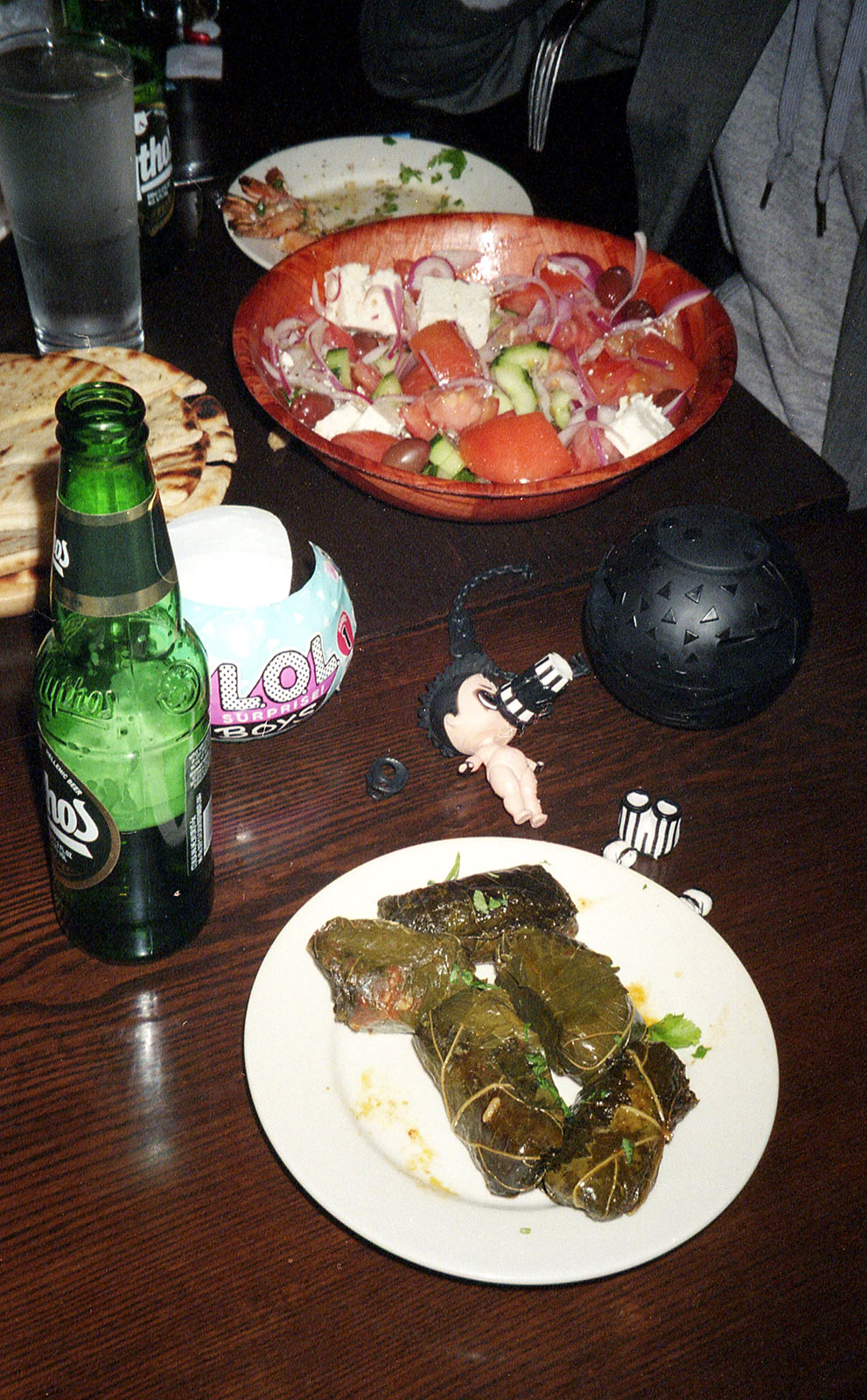 Steele Kratt: Ok I’m going to hit you with the boring questions first. How much would you say that the drums influence the melodies in your songs?

Ruben Radlauer: The writing process is super collaborative, and it’s a lot of pinging back and forth.

Cole Haden: The melodies are set pretty early in the process. When we’re writing with drums, I try to think about my voice as an instrument in the rhythm section.

Aaron Shapiro: Everything is a drum.

Steele: Kind of. I feel like a lot of bands want the drums just playing time under the melodies and chords, but it’s not the same way for you guys—you can hear how they’re all woven together.

As such tight musicians, I’m drawn to think you all are classically instructed, however, the genre you lend yourselves too often is a pathway for many self-taught musicians. How many of you are classical trained vs self-taught, and did you have to do a series of unlearning to write this way?

Cole: Whether or not we owe the places we were trained, we’ve been playing music individually for a long time, and we have a vocabulary we’ve built over our whole lives that we don’t discard during the writing process. But, we also don’t aim to work within a particular idiom other than the one that emanates organically from the process. 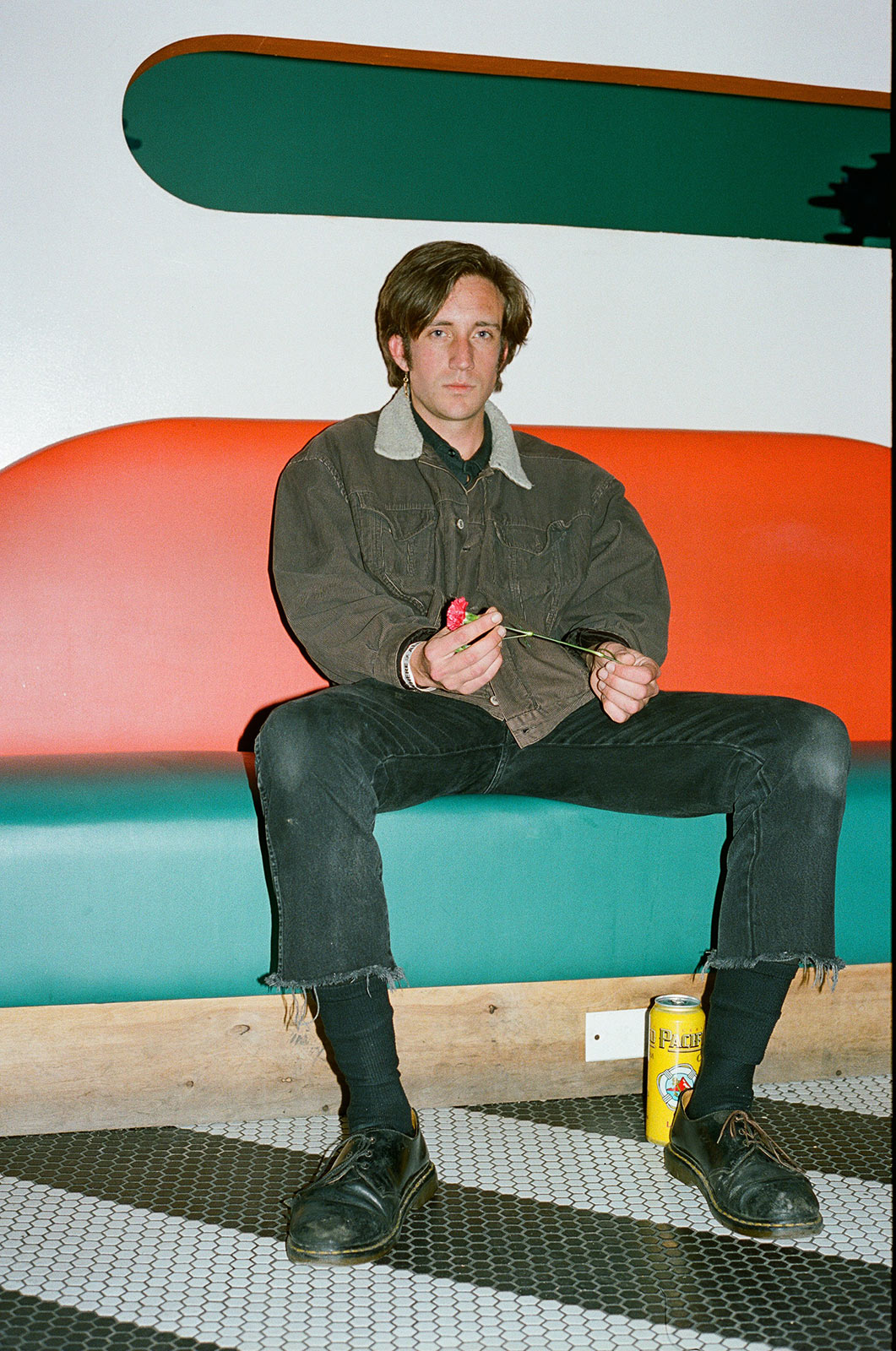 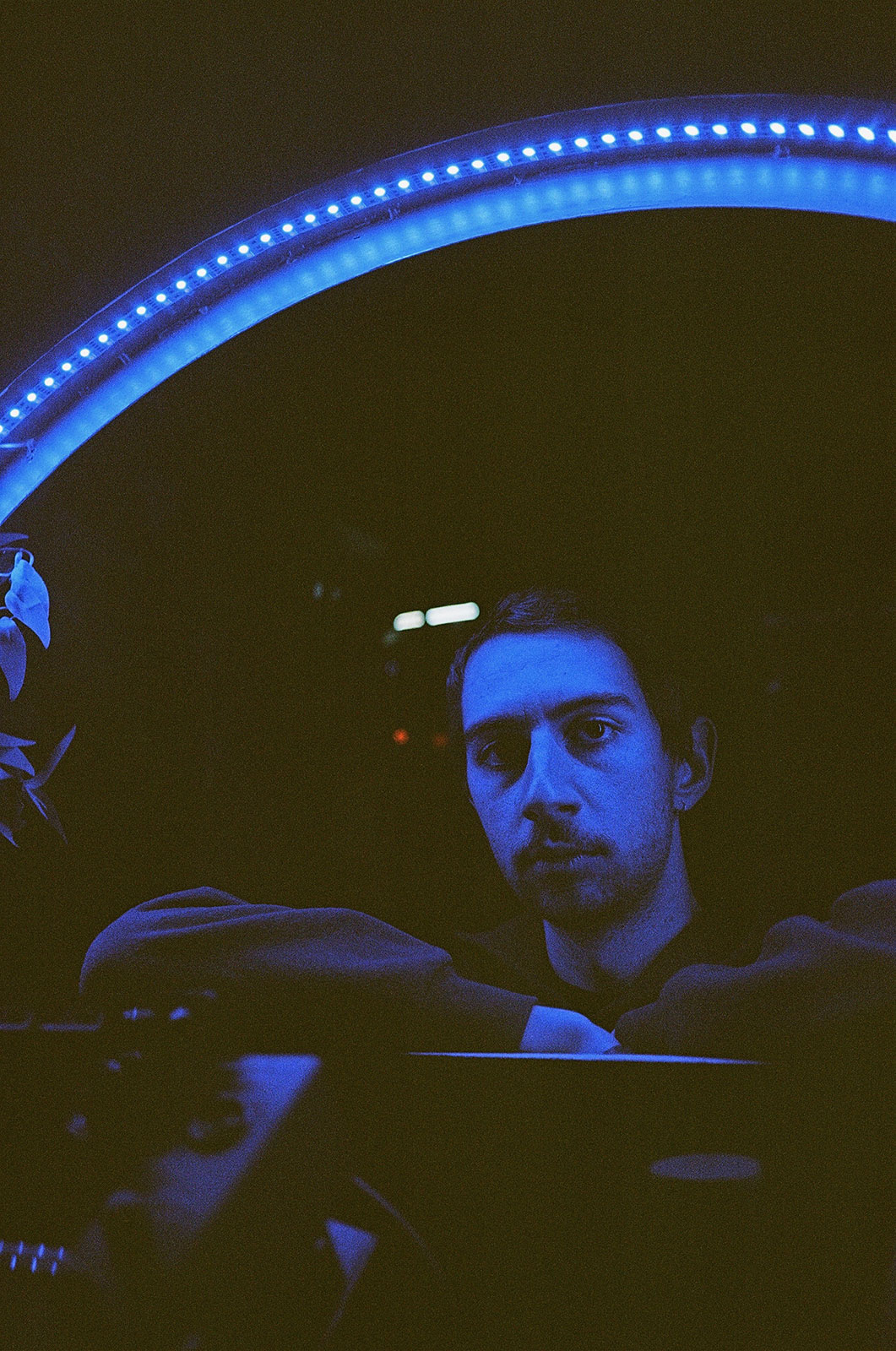 Steele: Who would be your dream act to tour with? The musicians or acts can be alive or dead or defunct.

Cole: Martin [Rev] isn’t here, you don’t have to pander to him or his spirit.

Aaron mimics the high pitched melody of a guitar riff from a CKY song.

Cole: You’re going to have to transcribe that.

Cole: Sade. And we’re all not saying it right now, but probably also Death Grips.

Cole: Also, I think doing the vaudeville circuit would be great. A 1920s vaudeville with red curtain vibes. But if they had a 404 [drum machine) as well.

Steele: You could go back and take the 20s by storm. You would be like wizards. They wouldn’t know how to understand what was going on, but they’d fuck with it hecka.

Ruben: Or maybe Mozart, but Mozart when he’s in child prodigy mode.

Cole: Yeah, only when he’s six though.

Steele: Are you from Delaware?

Cole: Yes, and that’s on record.

Ruben: Dolly Parton and Larry David? I maybe wanna mix them in with a family member too.

Steele: I have an Allen Iverson tattoo. [Document team member] Jill poked me a #3 jersey in his honor, and, coincidentally, it’s actually right next to my Larry David tattoo.

Jack Wetmore: Nick Cave, I used to roast him, but now I like his music. 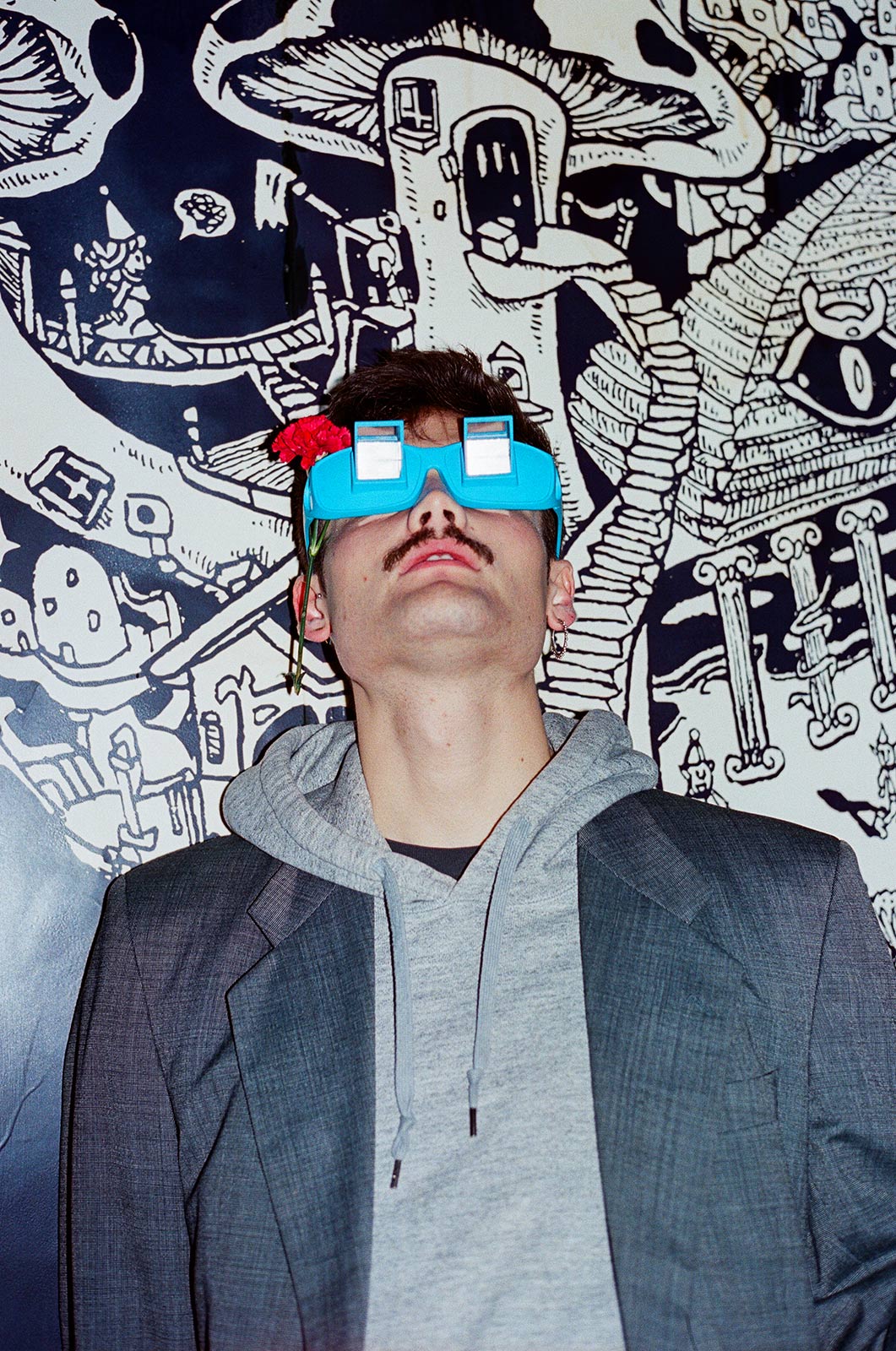 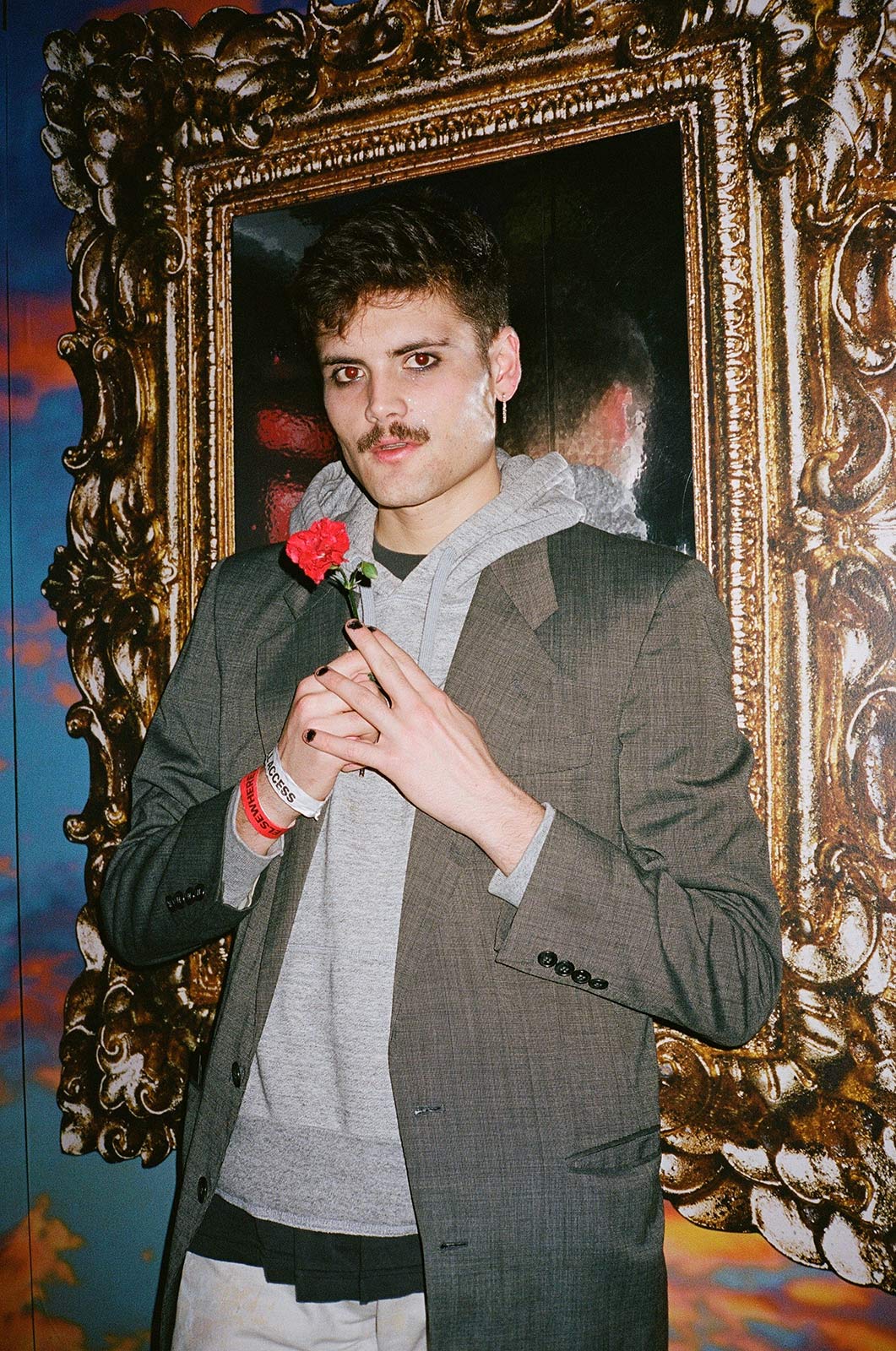 Aaron works from time to time at the art gallery, the Hole. The Hole is home to famous Instagram pomeranian, Bertie the Pom, my favorite dog in the world. I saw him on the street once, and my brain spasmed.

Steele: Aaron, you have to tell me about your favorite experience with Bertie the Pom. What you got?

Aaron: The crazy thing about Bertie is that you will mostly have had some negative experiences together. It’s not his fault, he’s just so cute that you want all of his attention at all times. When you finally get that love and undivided attention from him, you forget about all the pain of the chase.

Steele: That dog has so much star power, it is unreal.

Aaron: It’s crazy. He’s my guy for sure.

Steele: The first time I saw you guys, I loved your merchandise. What inspired you to make the merch that you do?

Jack: It started with super minimal fashion vibes. I know how to silkscreen, so I made a screen that I’ll just slap on anything I find. We bring it around with us and make the clothes as we go. It’s much cheaper and more sustainable that way.

Steele: Do you have any more merch plans?

Cole: I think our ambition is far beyond what we do currently. We have a lot of good things planned for the future. We’ll want to keep it special though, as opposed to regular old merchandise. We recently made a run of about 10 bespoke silk polos, with an entirely different design to our other pieces. We’d love to do more stuff like that in the future. We like limited runs. 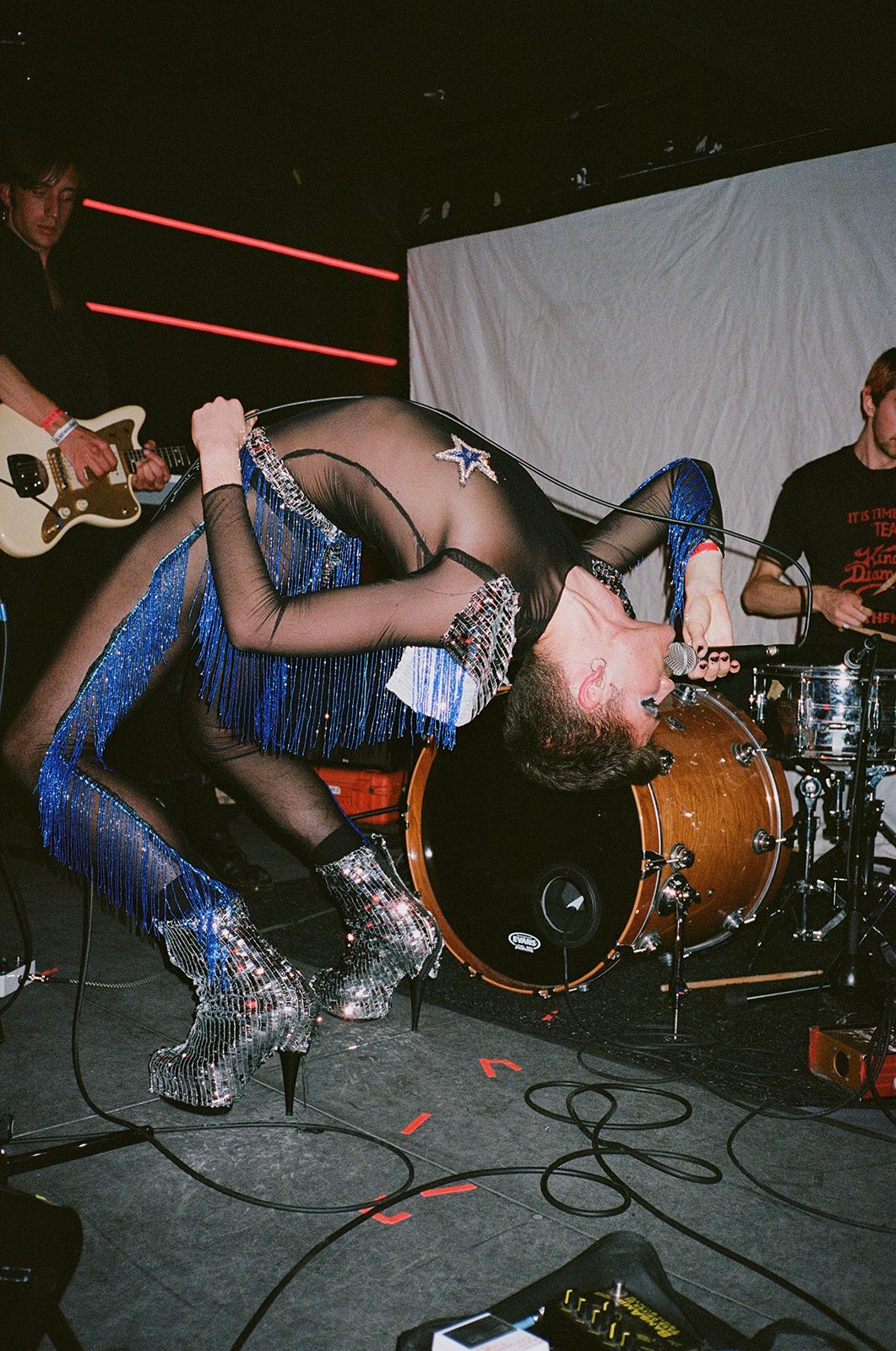 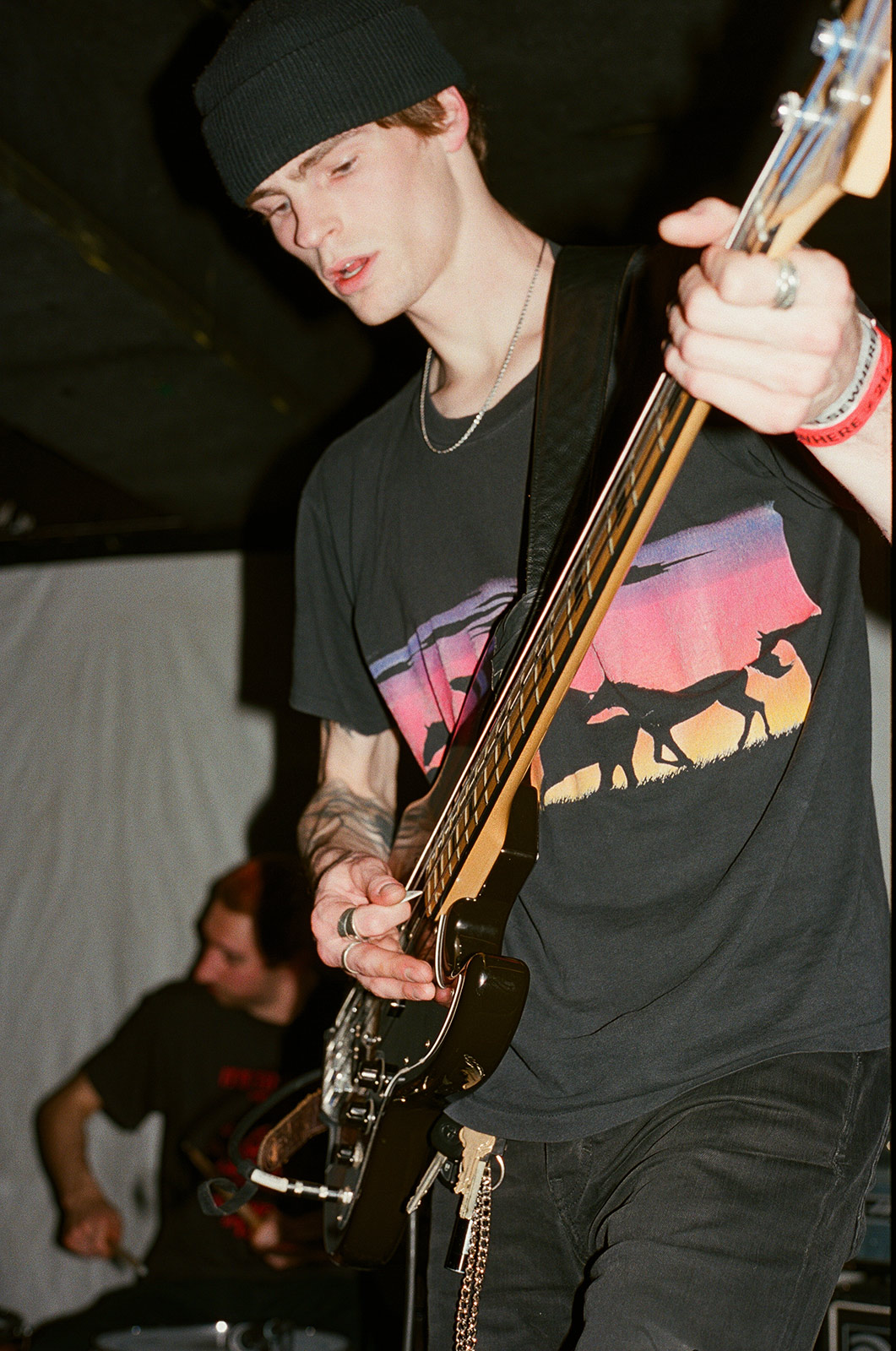 Steele: The road is truly an unglamorous place filled with angst and heartbreak. We’ve all had moments that have made us question why we do what we do. But in the end the nightmares are all too comical to stay mad about. What was your saddest experience playing music?

Cole: Okay, so we were in Europe and had just played a show in Valencia with a trio from Berlin. After the set, they invited us to come visit and play a show in Berlin with another band that they knew. We agreed, thinking it’d be a novel experience. We were aware that the show would be DIY.

Ruben: It was at a practice space.

Cole: Well, get this—it was a practice space that was converted into a tattoo parlor, the day of the show. It was under construction as we arrived so we couldn’t play. But, there happened to be another room available across the street, inside some guy’s house, which ended up being a pay-to-play scenario. We had to pay the man 50 euro to wake up and let us in. I don’t know if he was running sound for the night, actually, I think he just let us in and then dipped.

Ruben: Yeah, he actually just left and said it was ours for the hour. The other band said that was too little time and that they didn’t want to play, so we were the only ones that performed.

Steele: So how many people were there?

Cole: I think just that other band and a few of their friends.

Ruben: The other band had bought a lot of beer to sell, but because no one came, they were just selling the beer to us and their friends. The small crowd felt bad and they asked us for an encore, but we didn’t have another song to play. We ended up just playing a song we had already played.

Cole: And the only reason we did that is because the only people who came to see us, the trio we had met in Valencia and set us up with the show, came late and missed our first songs.

Ruben: Which caused us to go over the hour, so the guy [who owned the house] wanted to fine us 50 more euros. One of the friends of the other band got outraged and wanted to fight the guy, and we all ended up having to break it up and to leave. It was really cold the whole time.

Cole: It was truly freezing that night.

Ruben: I think it was actually on this exact day two years ago, let me check. [Looks] Yes, it was on this very day! 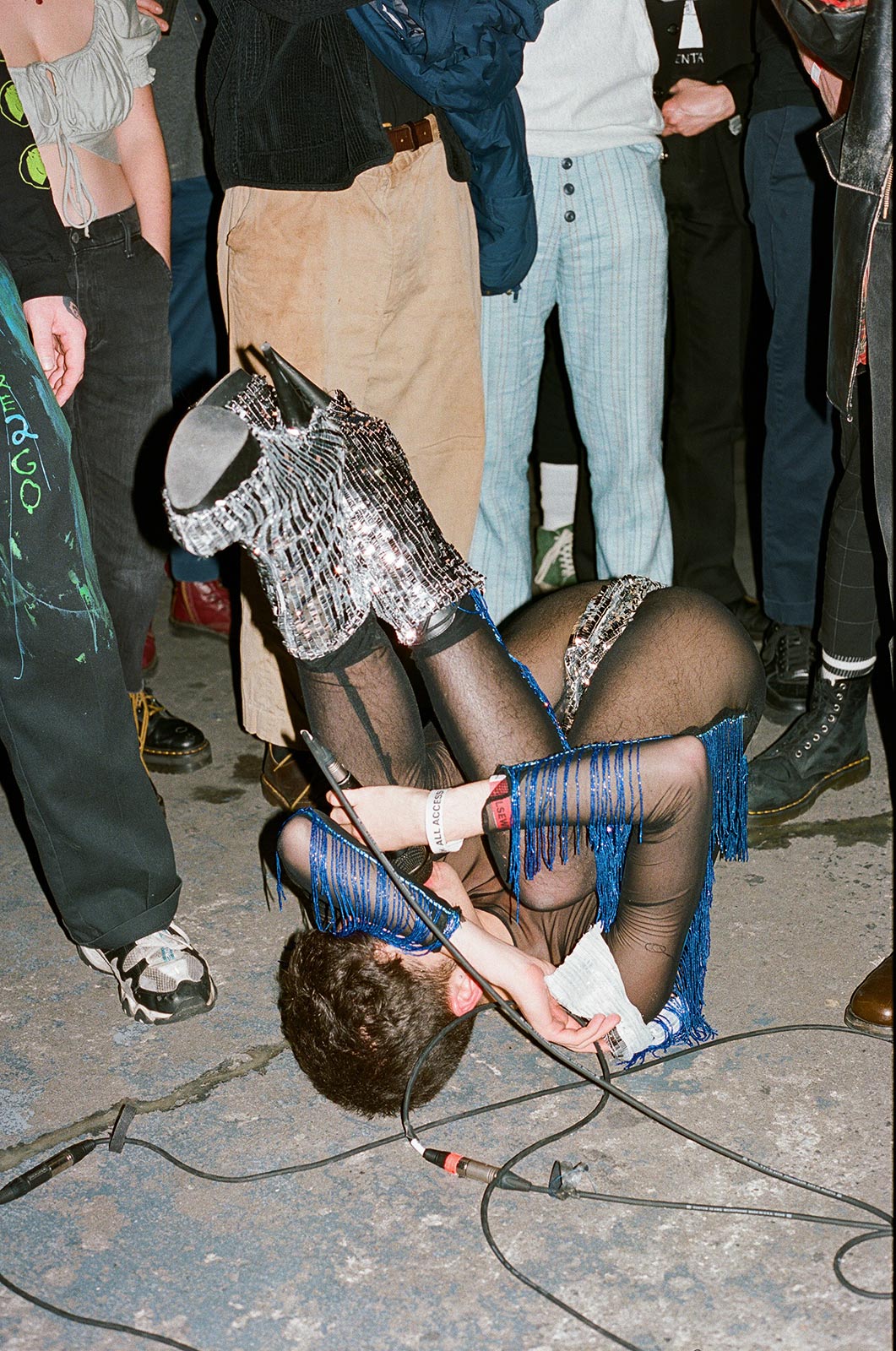 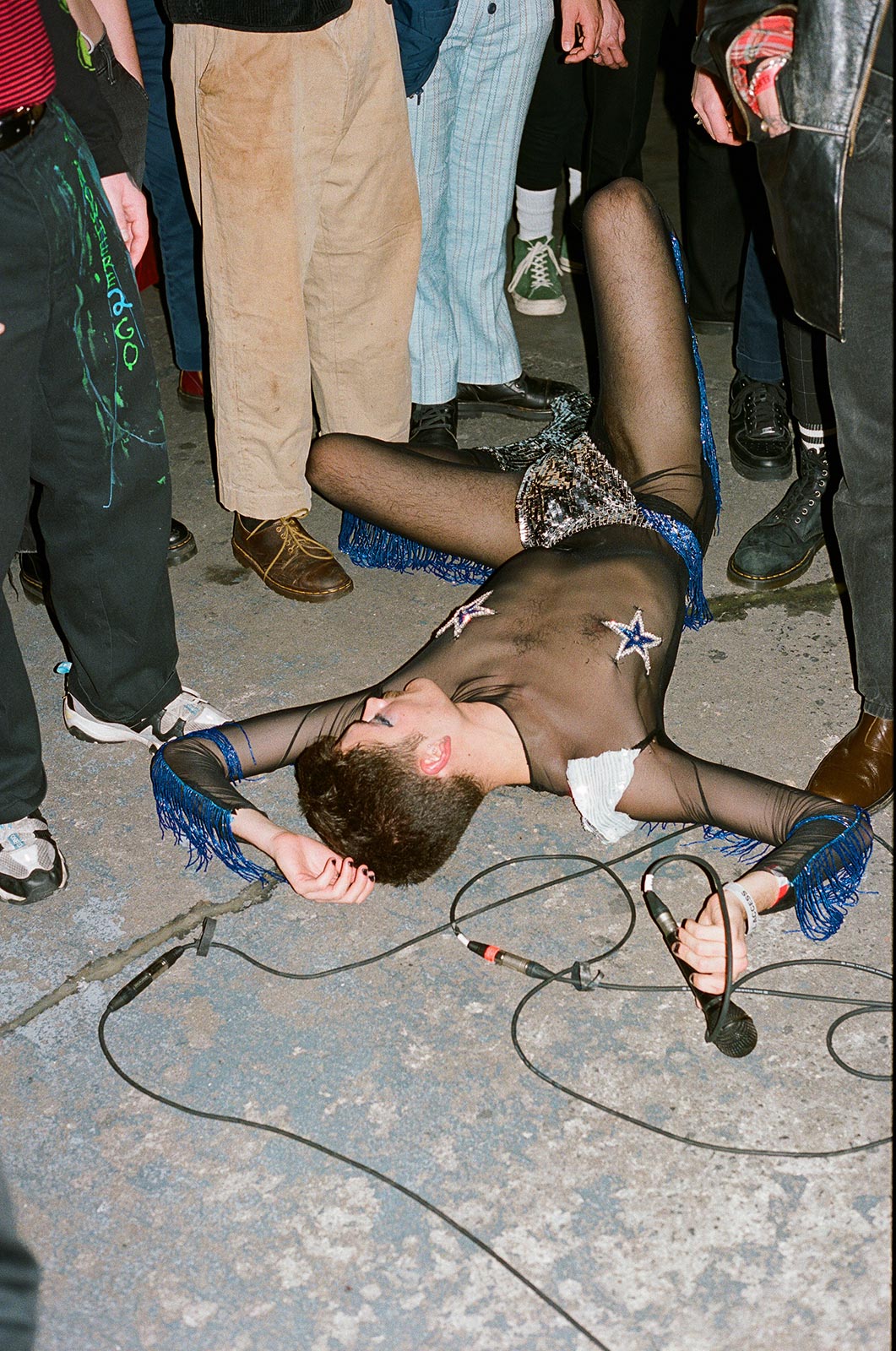 We get the bill, and Eric and Cole go back to the venue to prepare for the show with Martin Rev of Suicide while the other boys and I head to a coffee shop for a post-meal, pre-show pick-me-up. While rushing out of my apartment to meet, I grabbed my bizarre pair of mirrored reading glasses. I thought they’d be good for a cheap laugh or some fun. Goddamn was I right—the glasses, as always, were a hit. We drank coffee with a skewed perspective, and walked along the industrial Flushing Avenue, vision altered, back to the venue.

The set was loud and as tight as ever. Just like I’d witnessed the first time. Alongside me this go were Sean, Garrett (my best friend of 23 years), and my friend Jordan. Garrett and Jordan are photographers, and also significant others who like to shoot together. I wanted them to see and document the show. They were all surprised. None of us could quite put our fingers on the pulse of what we were listening to or watching, but ultimately, there is no need to. As music listeners, we always want to put what we hear into a box. It helps to familiarize the content we ingest and can assist us in explaining that feeling to our peers. However, sometimes some things can’t be explained, and you just have to see for yourself. 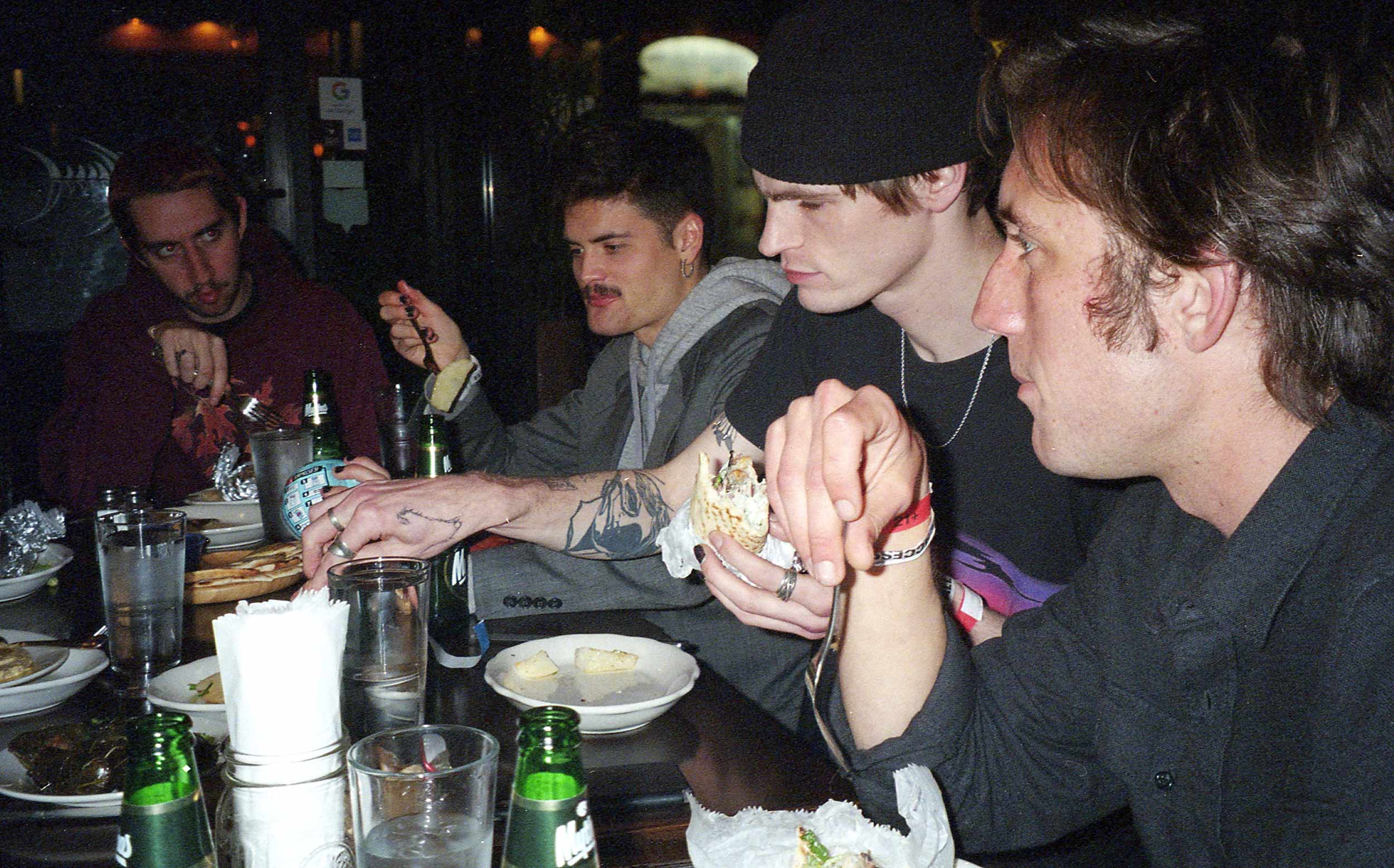 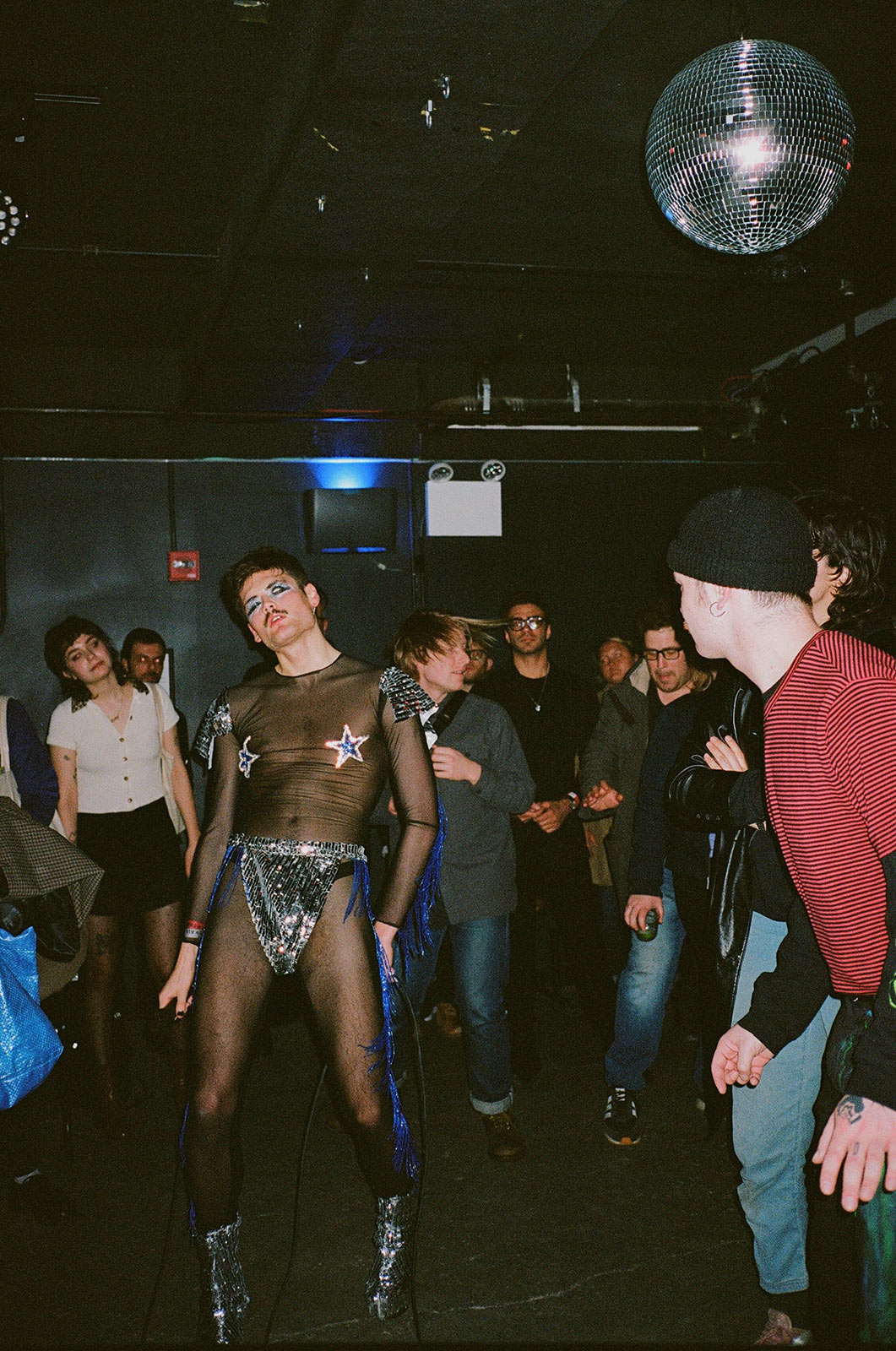 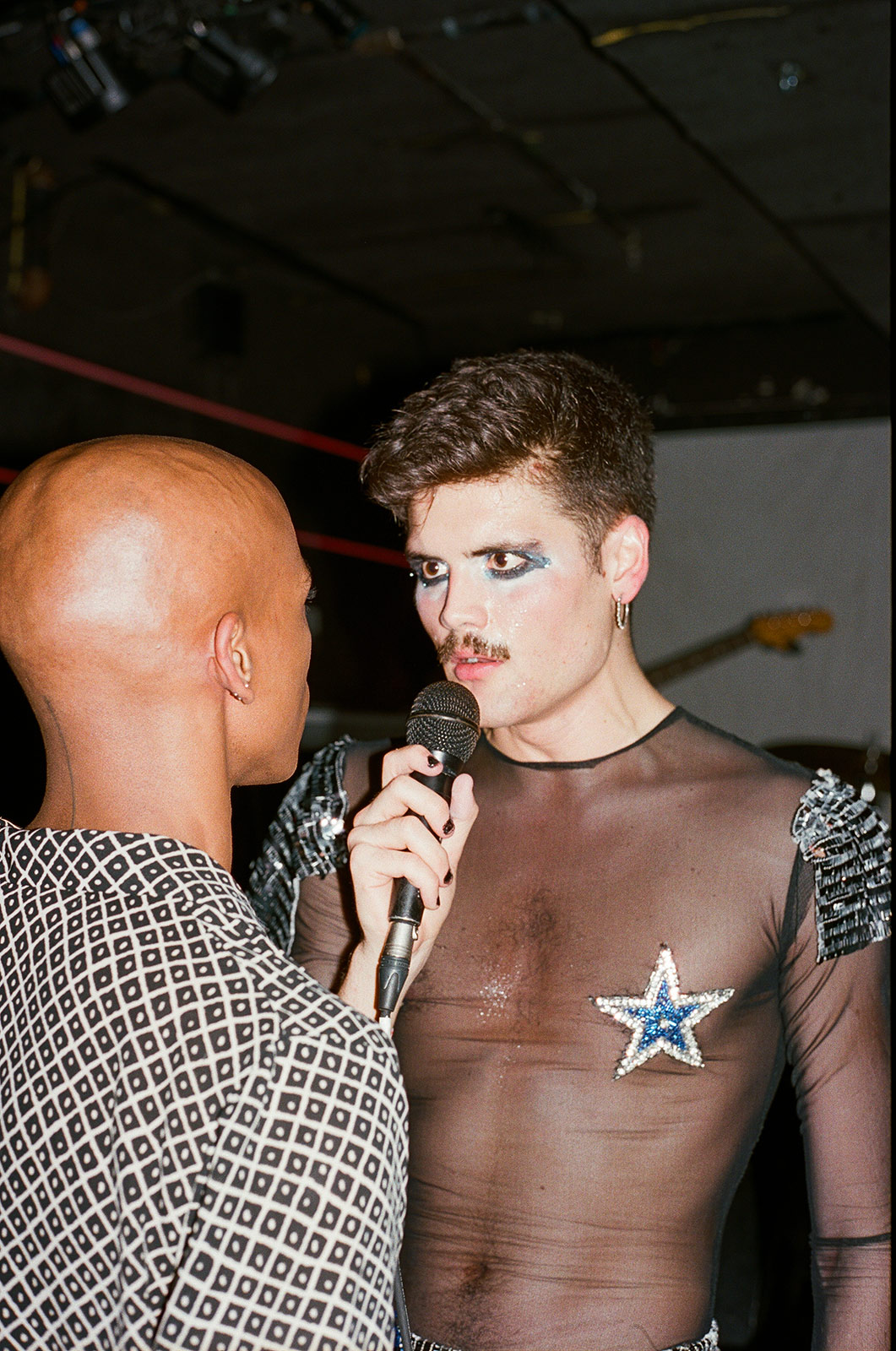 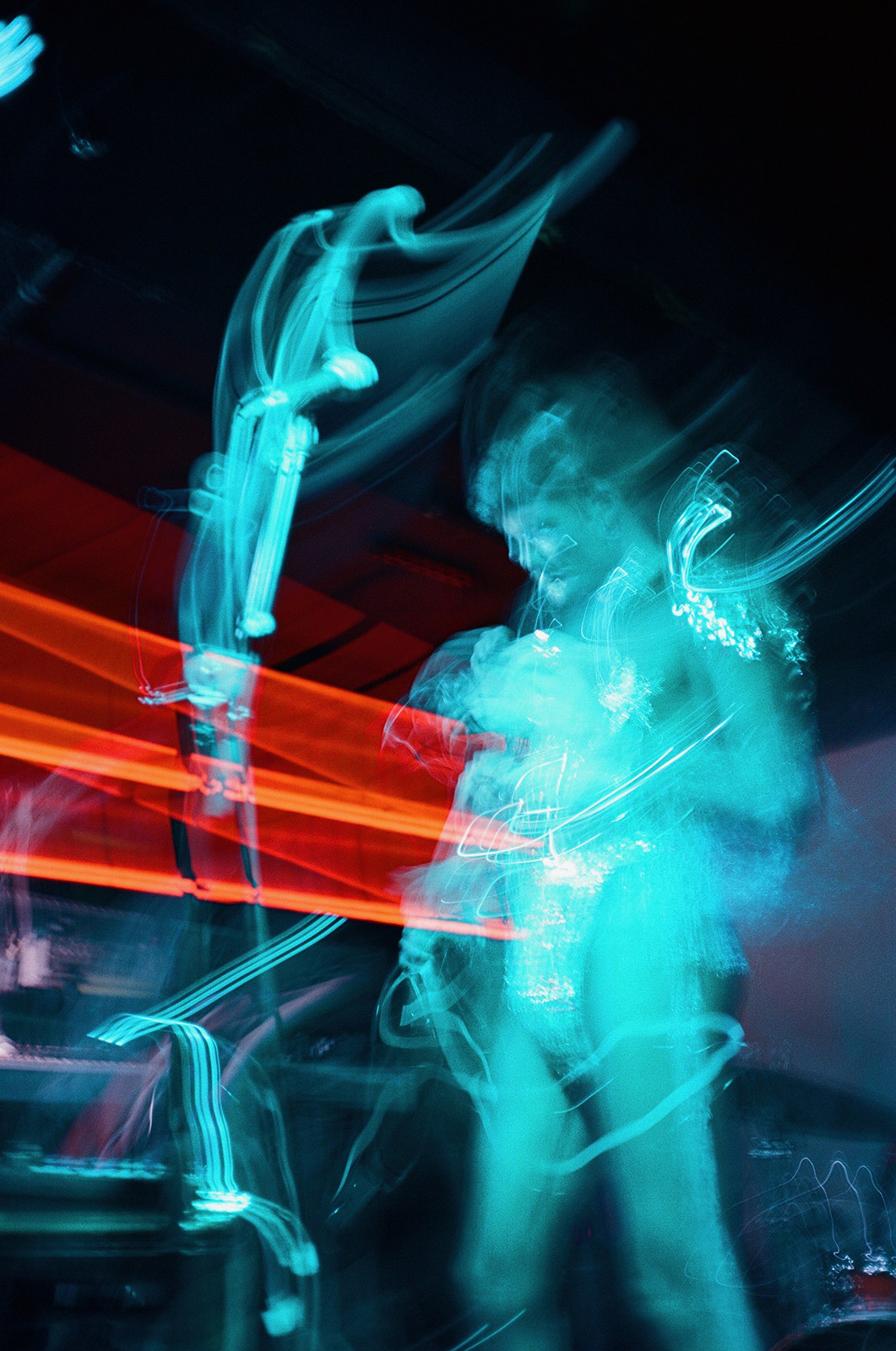 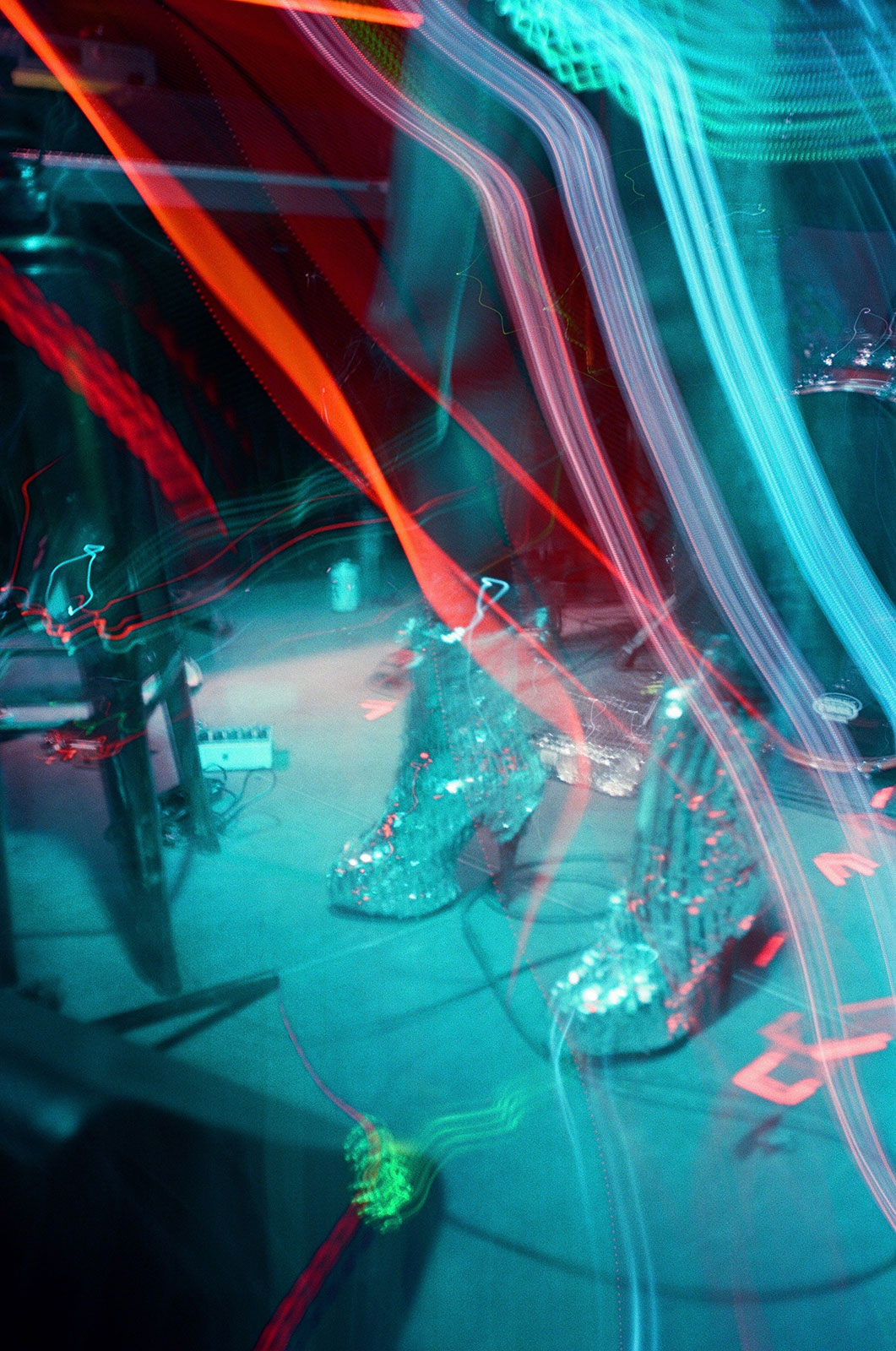 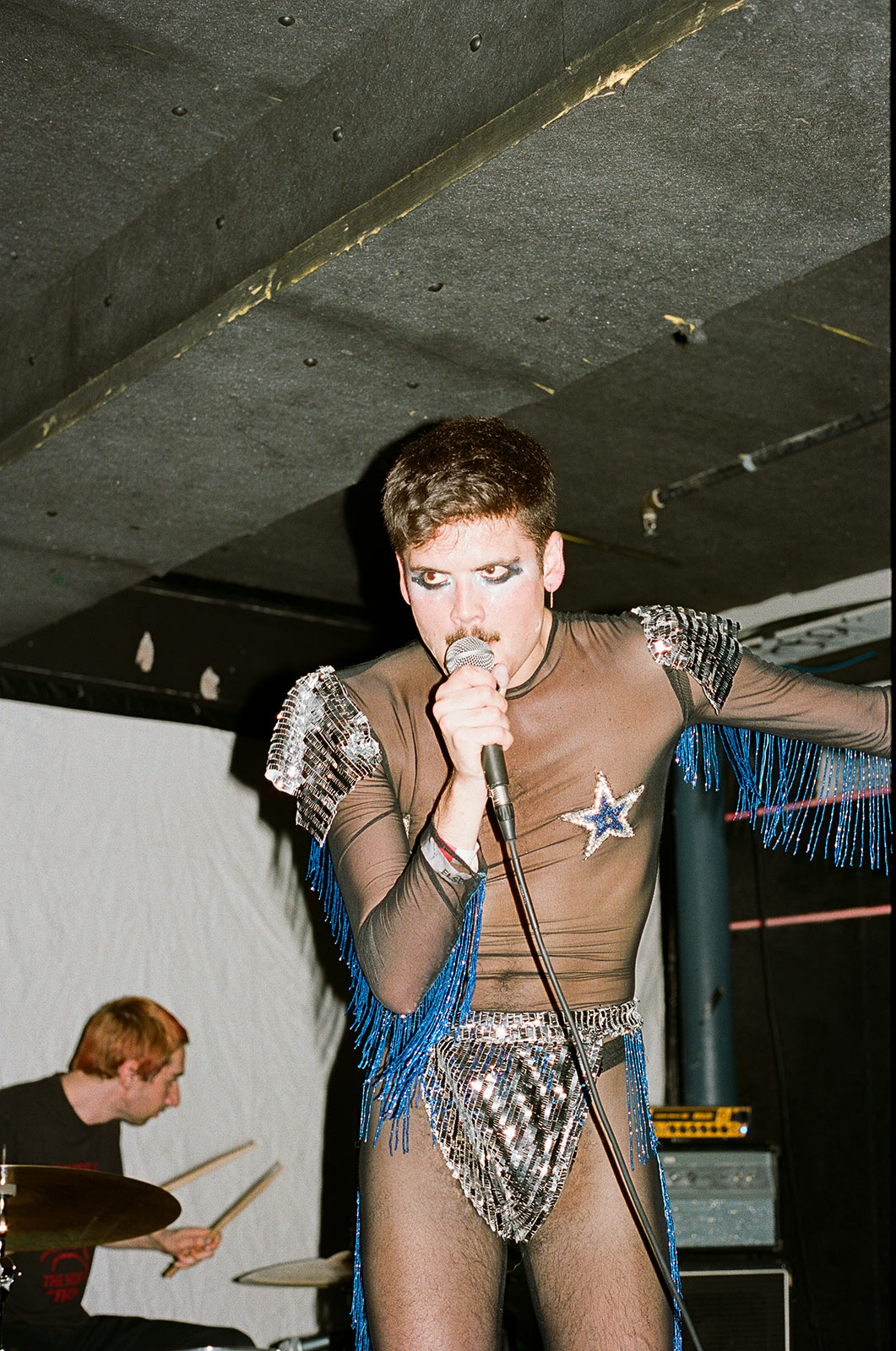 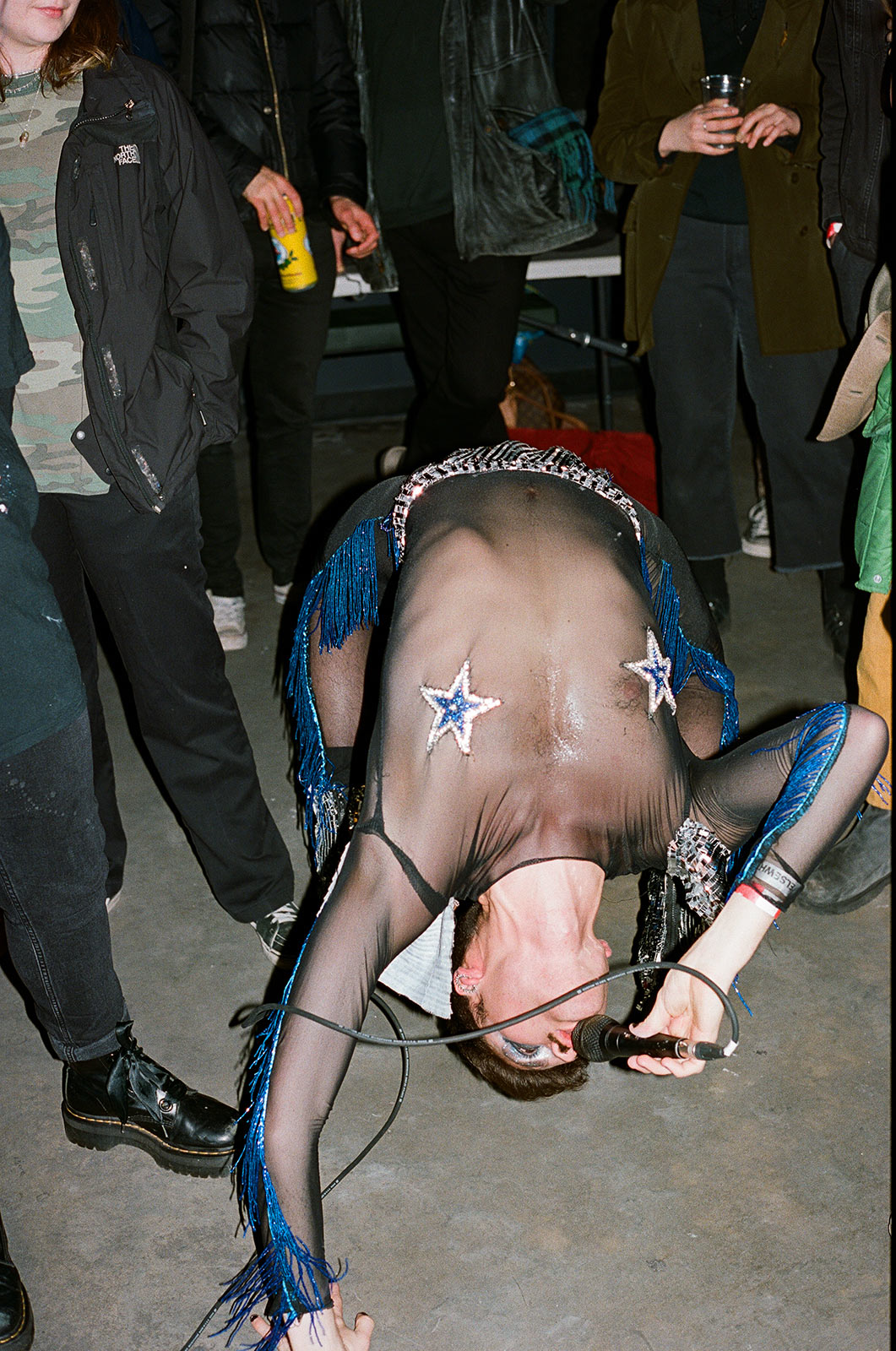 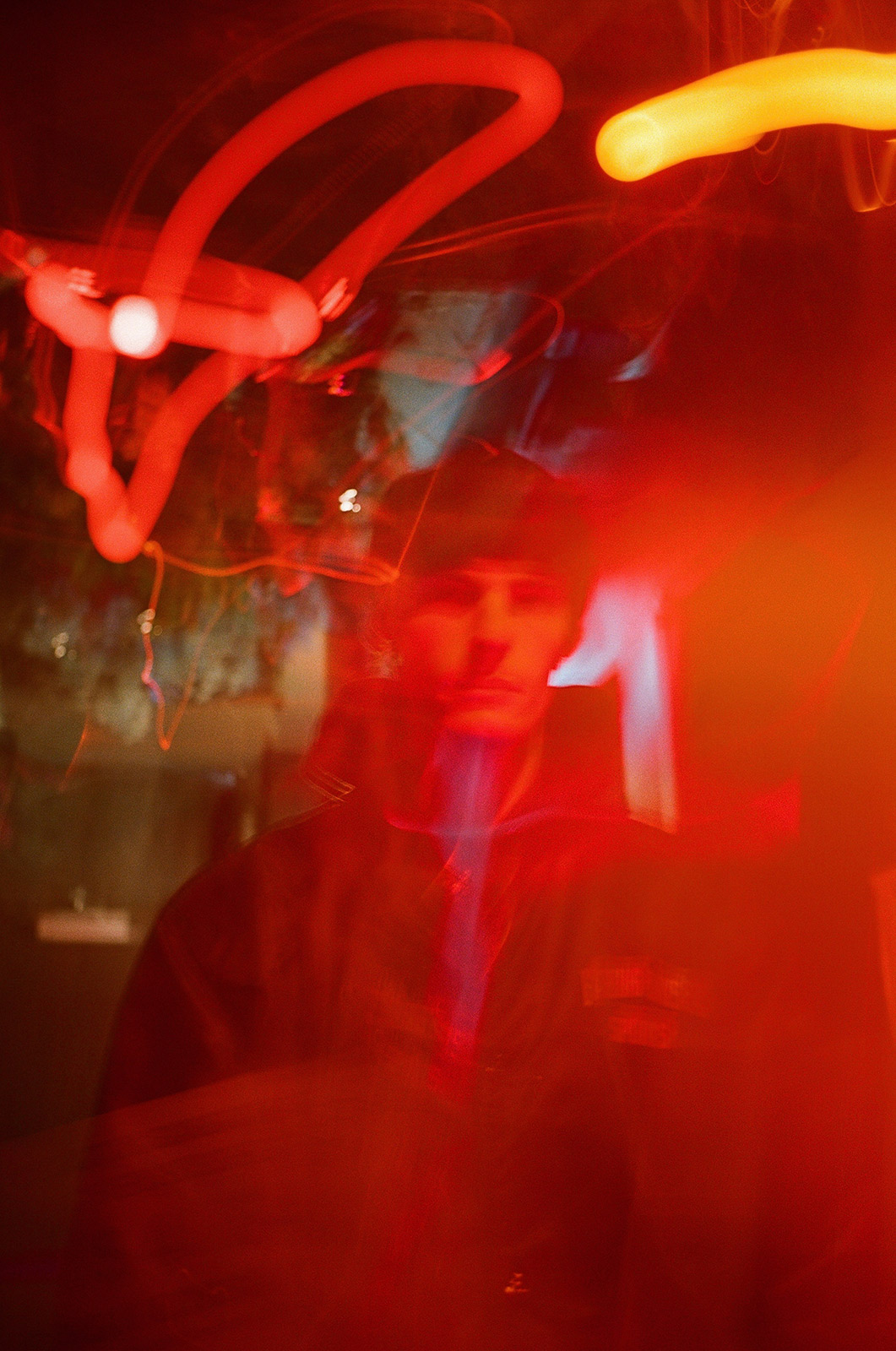