Ryan Koopmans and Alice Wexell's short film ‘With You’ captures fleeting moments of sentiment on the multisensory streets of the Mong Kok district.

Sonically, With You begins with a trio of synths. One is a sonorous, steady pad; one is airy, playing a high note; the last flutters on a single note. As the music—“With You” by collaborator Ross K—unfolds, elements of the arrangement continually creep in. Hi-hats, reverberant snare hits, Ross’s lead vocal, and the attendant harmonies, eventually, burst into a deluge of percussion. Visually, co-directors Alice Wexell and Ryan Koopmans captured the same sense of imbrication through documenting a few of the faces and structures of Hong Kong.

In a region notorious for heaping a populace well over 7 million people upon each other to fit into 427 square miles, the directorial duo document a sampling of the myriad emotions found on the streets of the city. The film was shot in the mazy, more traditionally Chinese Mong Kok (Cantonese for “crowded corner”) sector of the Kowloon urban area, a few months before it became one of the primary sites of recent protests.

Various snatches of the quotidian are spliced with the visual hallmarks of Hong Kong: flashing neon signs, rows of street banners providing a kaleidoscopic canopy, and a vast skyline which resembles a labyrinth from above. Document spoke with Koopmans about the history behind Hong Kong’s distinct aesthetic and finding a world within the many faces of a crowd.

Jordan Levy: The range of expression you captured throughout the film was quite wide, with romantic moments intermingling with more pensive, solitary shots. How did you decide the sequencing of these varying emotions?

Ryan Koopmans: Many of the faces were shot at street intersection crossings where many people are walking across the street at once, lost in thought in their own worlds. We wanted to show the range of expressions that you see when people-watching, from introspective thinking to crying to romance. Our flâneur-like approach to observing individual moments needed to be contextualized with the wider architectural shots which convey the sense of scale and atmosphere of the city. Although crowds appear to be collective masses of people, everyone has their own lives and dreams and anxieties, and we were interested in zooming in and targeting specific samples of this in people’s faces.

Jordan: I couldn’t help but be drawn to the eyes of people in the film, especially since so many were caught mid-blink or in profile. Was there a distinct focus on eyes when choosing shots to be included in the piece?

Ryan: Getting as close to people’s faces as candidly possible was of interest, and we felt that it was a good way to create contrast with the architectural scenes that were shot from high above the street level. We wanted to capture people’s emotions as much as possible, so we often looked closely at eyes.

Jordan: The film works in tandem with the song ‘With You’ by Ross K, so what drew you to that piece of music? Along with that, was it a matter of matching the song to a location or vice versa?

Ryan: We described to Ross what we were going to shoot, and he wrote the music with some of these concepts in mind. We’ve worked with him before on other projects and he is a great sound designer and composer.

Jordan: What qualities were you looking for in people when filming this piece? Was there a general archetype you were looking for, or was it more fluid and based on instinct?

Ryan: We were drawn to people that caught our eye who had interesting faces or unique styles—people that we felt encompassed the mood and aesthetic of the larger city.

Jordan: The aerial shots have such a rich visual texture. How did you plot out shooting footage of such an expansive, yet condensed city?

Ryan: All of the shots were made from the tops of buildings, glass elevators, or mountain tops, no drones. We filmed from high up vantage points with the same camera system that we used to shoot on the streets.

Jordan: You’ve spoken in the past about how a “relationship to nature, national identity, and cultural symbolism” are inherently found in a city’s structures. How do you think the makeup of Hong Kong’s skyline reflects its history?

Ryan: The mixed history of Hong Kong is reflected in its skyline. From British colonial to contemporary Chinese and Western big business, the evidence of Hong Kong as a banking and financial hub is evident in the built environment. Also, the tropical latitude in which the city exists is apparent in the foliage that grows throughout the city, the rust from humidity on old signs and air conditioning units, as well as the sounds and smells that you find in a warm climate. On the skyscrapers themselves, you can see the transitioning of ownership between Western and Chinese businesses, through the language and corporate logos which have switched back and forth in ownership over time. 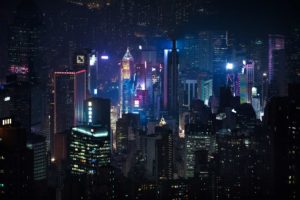 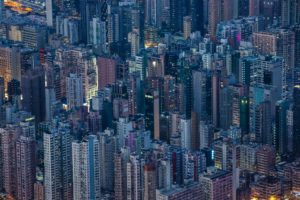