The short film by Ryan Koopmans and Alice Wexell reveals a hopeful future among architectural histories.

The opening shot of Lucas, a short film by photographers Ryan Koopmans and Alice Wexell, frames a shiny, black Mercedes with the beautiful, eerie remains of a Soviet sanatorium in Tskaltubo. The two setpieces represent the past and future of 18-year-old Lucas Kutateladze–and of his home country Georgia. At the height of the Soviet Union, Tskaltubo was a popular spa and therapeutic bathing destination. Beginning in the 1920s, Soviet citizens were required to take a minimum two-week, state-sponsored spa vacation once a year–think strictly regimented sunbathing time and scheduled spa treatments based on doctor consultations. At its height, the ‘Russian Riviera’ town attracted over 100,000 visitors per year; today it is nearly-abandoned, its classically designed 22 sanitariums’ giant arched windows, stately columns, and spiral staircases left to nature. Refugees from the Abkhaz–Georgian conflict in the early ‘90s were housed in the empty buildings, with hundreds still living in the ruins.

Ryan Koopmans met Lucas Kutateladze while working on a photography project about Tskaltubo and the displaced Georgians and remaining stalwart locals who call it home. Kutateladze grew up in the dwindling echo of a bygone era; without the societal infrastructure that promotes exploration and growth, the strength of his own curiosity and intellect motivated him to learn English, get his driver’s license, and go to university in Georgia’s metropolitan hub Tbilisi. Here, Document speaks with Koopmans about Kutateladze’s determination and the myriad histories revealed by Soviet architecture.

Maraya Fisher: From this video and your portfolio, it seems your primary focuses are architecture and cityscapes. What draws you to these subjects? What stories do they tell?

Ryan Koopmans: What interests me is not the architecture specifically, not specific buildings or landmarks, but the themes in which they encompass. The relationship to nature, national identity, and cultural symbolism inherent in a structure, or the passing of time, are themes that are expressed through the built environment and are what draws me to photograph them.

Tskaltubo encompasses all of these concepts very extremely. Nature has overran the human-made structures in the town since their near total abandonment in the early 1990s. The markings of time are apparent in the way that the buildings have deteriorated but wallpaper and household items in deserted, glamorous buildings still stand where there were several decades ago. Also, the structures themselves represent a particular time in architectural historical style like Soviet classicism, Soviet modernism, etc.

Maraya: A lot of your work centers on former-Soviet countries. What fascinates you about this region? How would you describe the energy?

Ryan: Former-Soviet countries fascinate me for many reasons. Each country has increasingly distinct differences as time goes on from the year of their independence from the USSR to today, yet there are still many similarities found across the region—residue from the Soviet era and system.

Architecturally, I am fascinated by the large sense of scale and the way in which cities were planned and built. Sometimes they were designed with consideration and conceptual planning, and other times big neighbourhoods were built as a temporary housing solution but are still in use today. The use of concrete, highrises, large boulevards, and symmetrical layouts fascinates me photographically.

In general, I am drawn to the culture and the people of these countries, albeit different from one another when comparing Ukraine to Georgia, Russia to Kazakhstan; they are hospitable people in unique countries with dynamic and interesting histories.

Stills from Lucas courtesy of Ryan Koopmans and Alice Wexell.

Maraya: How did you meet Lucas and what inspired you to make this short film?

Ryan: During the research phase of a photography project about the town of Tskaltubo, I began looking for a local in the area who could help as a ‘fixer’ AKA, a translator or guide.

I reached out to people who appeared to live in the area via social media and everyone suggested one person in particular, Lucas, who they said would be the perfect translator.

Upon meeting him I understood why he was so well known and recommended.

Although he comes from a rural farm house with limited living facilities, is an only child raised by his grandparents, and grew up in a system that could barely meet his educational needs (his school fell apart and was never rebuilt), he managed to teach himself about the world, learn another language, and set goals and dreams for himself that most people in his context don’t aim for. Lucas has a close relationship with his grandparents who welcomed Alice (my co-filmer) and myself into their home with great hospitality, and Lucas has an aspirational and determined perspective which is inspiring to see.

Alice and I realized that perhaps another interesting and meaningful story, aside from a photo story about Tskaltubo, could be a video about Lucas himself.

Maraya: I was struck by the contrast between Lucas’s hometown of Tskaltubo and Tbilisi. Can you tell us about what it’s like to experience such beautiful decay contrasted with industrial progress and modernity?

Ryan: We were conscious that the lived experience of the people who live in these deteriorated buildings or small towns is very different than the photographic value that Alice and I see as photographers. That being said, there definitely is a beautiful decay apparent in the ruins of Tskaltubo, as the town was built to be beautiful and architecturally striking in the first place.

Tbilisi is one of my favorite cities in the world, and although bigger and more developed than a small town like Tskaltubo, it has many of the same qualities in the sense that it is an amazing mix of eras, architectural styles, and cultural influences.

Tbilisi, like all of Georgia, is full of very friendly and passionate people who are proud of their country and culture.

Maraya: Another thing that struck me about Lucas was the generational differences. The world he grew up in is so vastly different from that of his grandparents, who raised him. He was raised in the shadow or ruins of their world, in some ways. How was it witnessing the different generations interacting? What were your observations?

Ryan: The older generation is still very much defined by the society they grew up in during the Soviet Union. Luckily for Lucas his grandparents are understanding and open-minded about many things.

What made Lucas such an interesting character to make a video portrait about was also that he is a product of growing up with access to the internet. His exposure to everything from western pop-culture to trending vloggers on Youtube in a way breaks down the barrier of geographical isolation that growing up in a small town creates. His grandparents are hard workers of the land who spend their days taking care of animals and the house, very much engaged with their physical present. Lucas’ existence growing up was very much in the virtual world…this being a concept that is apparent all over the world but is extra exaggerated when dealing with such a small isolated town, and with two generations who have lived in completely different socio-political ideological contexts.

Furthermore, of interest is that his grandmother used to work in the formerly flourishing health spa sanatoriums and hotels which Tskaltubo is famous for. During the Soviet era they had tens of thousands of visitors from all over USSR coming for holiday and spa treatments. At the collapse of the Soviet Union they all closed down and have fallen into decay. 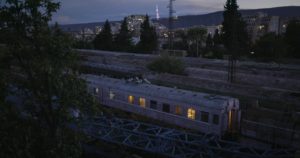 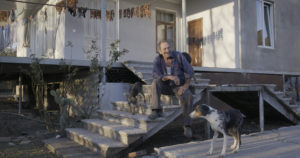 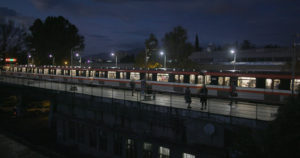