Images courtesy of
The Museum of the Moving Image

Katharina Kubrick speaks on her father's love for New York and why the ‘2001: a Space Odyssey’ might be Kubrick at his most optimistic.

When our world finally comes to its inevitable end, the last lifeforms on Earth may very well be roaches and two people arguing over the ending of 2001: a Space Odyssey. Since the film’s release in 1968, Stanley Kubrick’s depictions of space, technology, and humanity’s unknowable future have kept its place as an all-time classic even the most contrarian film goers can agree on. (The Catholic church counts as one of 2001‘s most inexplicable fans.) It’s this legacy that occupies Envisioning 2001: Stanley Kubrick’s Space Odyssey, an exhibition that takes a look back at Kubrick’s influences, research, and relentless technical innovation in the pursuit of making “the proverbial ‘really good’ science fiction movie.”

Much of the massive, internationally-touring retrospective has finally made its way to New York, showing at the Museum of the Moving Image through July of this year, thanks in large part to the Kubrick family. His daughter, Katharina Kubrick, recalls how her father, born and raised in the Bronx, missed New York after he relocated London, always relishing the chance to get his hands on news from the city in papers and magazines. “He was a New Yorker to the very end,” she recalls. “He would be thrilled that this was here.”

On the Hotel Room set of 2001: a Space Odyssey (1968, Dir. Stanley Kubrick). Kubrick is shown at center behind the camera, with Keir Dullea in the spacesuit (left). Image courtesy of Warner Bros.

The exhibition touches upon the formative impact of the New York film scene on Kubrick when he began working on the film in earnest in 1964. The opening of the show features clips from Jordan Belson’s Allures and To the Moon and Beyond, produced by a company which made films for NASA. Impressed by the hyper-real depictions of space, so different from the sensational Hollywood norm, Kubrick reached out to the team to create concept art for 2001 and ultimately brought two representatives onto the film full time. The show also focuses on the storied collaboration between Kubrick and Arthur C. Clarke, who would hole up to write in a room at the infamous Chelsea Hotel while the pair developed initial screenplays. Sections of those drafts as well as lengthy correspondence between them are all on display.

As much as the exhibition is a tribute to Kubrick, it’s also a testament to the army of writers, art directors, researchers Kubrick drafted to produce 2001 featuring logo designs for HAL, concept storyboards for space stations, and some rather lengthy back-and-forth about the fashions for hair, makeup, clothing, and magazine covers in the year 2001. It’s easy to be impressed by the scale and complexity of their undertaking compared to the sci-fi blockbusters of today, now that CGI has gone mainstream and even television shows can count on multi-million dollar budgets.

Kubrick, particularly for 2001, receives much well-earned credit for setting a perpetual new bar for what film can technically accomplish, and Envisioning 2001 honors that legacy, exposing the planning stages and customized production equipment developed to film the Stargate sequence among others. But Kubrick’s technical efforts were also crucially respectful of wonder and set an even more challenging standard for his successors: how to craft a compelling and beautiful science fiction film which is aware of its existential underpinnings.

“There’s a theme running through Stanley’s films about the fallibility and vanity and self-delusion of mankind,” Katharina Kubrick says. “2001 I think is the ultimate hopeful film. No matter how much we mess up there’s going to be something at the end of it.” She pauses and laughs, “Hopefully.”

Tags
2001: a Space OdysseyFilmMuseum of the Moving ImageStanley Kubrick
Tweet this quote 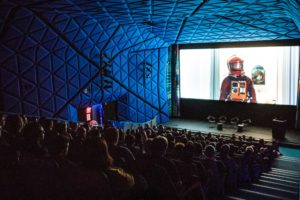 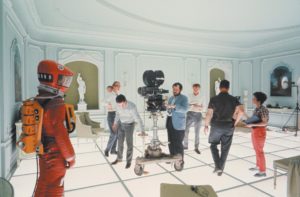 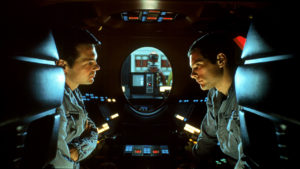