20 years after his seminal LP ‘Black on Both Sides,’ the Bed-Stuy bred MC continues to reimagine himself, hip-hop, and how music is experienced.

In June 2009, I turned 13 and received $15 in Barnes and Noble gift card money. I knew where every dollar was going.

This is before the rise of streaming services, and three or four years before millennial adolescents were old enough to notice sea changes in technology and music. Before we felt entitled to long for a barely remembered past of cassettes and even CDs. Record stores were not yet anachronisms.

After combing the “M” section, the “D” section, as well as a tree of records placarded as “New Releases!”, my mom, birthday benefactor and Barnes and Noble chauffeur, leveled the inevitable, “Why don’t we ask the register?” Oh, the dreaded we.

Asking duties were tacitly handed to mom, but when the cashier asked for the musician’s name, mom forgot, never having resolved his pronunciation.

So now I had to cough it up. My public pubescent body was going to announce what was, until that moment, a privately kept hero…

“The first part is spelled M-O-S.” I started.

Fall 2008 marked an awakening, in which the solar system of hip-hop was to become and remain, my preferred musical solar system. Out of all the MC’s I pored over that sixth-grade autumn, I felt most drawn to Mos Def, the Bed-Stuy raised rapper now known as Yasiin Bey. His changing rhyme schemes and morphing cadences, the way he actively listened to the needs of each bar and backbeat—as an MC, Mos Def’s incomparable and conversational flow convinced me that dialogue and patience could be cool.

2019 was a double anniversary for Bey (born Dante Terell Smith). June marked a decade since The Ecstatic was released (and sheepishly purchased by moi at a Barnes and Noble.) This fall marks the 20th anniversary of his debut and seminal LP Black on Both Sides.

Staying true to the 10-year pattern, Bey began sharing Negus (pronounced neh-goose) earlier this year, the 45-year-old’s fifth solo studio album, originally recorded in 2015. No sight of it on Spotify or Youtube, eh? I recommend consulting this piece, if you haven’t already. Thankfully, Negus is currently available for your non-downloadable, sans-cell phone listening at the Brooklyn Museum until January 2020.

“I thought his music contained a promise: that one can create and speak from a place of pleasure without penalty; that self-indulgence doesn’t always mean solipsism, and can actually be beautiful.”

This fall, I had three encounters with Yasiin Bey. The unflinching and poised face pictured on the Black and Both Sides album cover leapt into reality. Flesh and bone. But even through these concretizing, real-life encounters, Bey remained as limitless as the gaze seen on his first album cover, as mutable as the lyricist I used to bump to on my school bus.

Friday night and The Blue Note was full. Night 2 of 3, show 3 of 6 of Robert Glasper Trio x Yasiin Bey. Glasper was kicking off his month-long residency at The Blue Note with Bey as his guest star. His latest 19-song collaborative mixtape, Fuck Yo Feelings, included Bey on a 7-minute track titled “Treal”, tonight’s opening song. Bey was bouncing side-to-side, cupping his hallmark red microphone, and rapping:

After the song, the trio paused to regather, and Bey began pointing to audience members. His reasons for pointing seemed arbitrary until he curtly commanded, “Get off your phone. Get in the zone.” The spotted audience members were retracting their phones, feigning casualness. A law had been laid, and an alternative presented: “Resist the temptation to record everything. That’s what your memory is for.”

By the time the trio covered De La Soul’s “Stakes is High”, and Bey did his call-and-response “When I say vibe, you say vibration: Vibe!” the zone was written, at least for the dude standing next to me. Collared shirt, tall, curly haired, probably 21, an NYU student I surmised. When the crowd shouted back “Vibration!” he was always a hair too early, and the most annunciatory of anyone in my section. He was rhythmically challenged and too enraptured to care.

In any other circumstance, I might dismiss this dude as an overzealous fly perturbing the vibratory ointment, but tonight, Bey’s zone had relieved me of my ability to judge him. I saw my own fandom mirrored in the dude and assented. “All together now!” Bey repeated, “When I say vibe, you say…”

A week after giving a reading at the Wythe Hotel, in which Yasiin Bey shared his own poetry and selections from favorite authors (Bob Kauffman, Rumi, Victor Lavalle), Bey returned to perform a 20 minute set of new material alongside longtime collaborator and tour DJ, Preservation.

The Preservation-Yasiin Bey partnership is a little known, cookies-and-milk pairing. Preservation, a professorial crate digger, had chopped the illest 5 or 10 seconds of arcane funk and disco records, stashed them and sampled them for Bey. What Bey and Preservation achieved on this night begged of a full-length LP. Preservation’s minimalist touch laid loop-d-loop samples that Yasiin flossed over. I tried to jot some of his lyrics in my notebook—he was wearing his old hat of sociological sorcerer, flatly explaining the rules of class society:

The closer that you get to the top, more space
The further that you rise to the heights, less safe
But the views are amazing…”

Lemons bar and restaurant, located on the Wythe’s sixth floor, offers amazing views of the Manhattan skyline. In a pocket-sized corner of Lemons, walls studded with framed historical photographs, crystal chandeliers slurring low yellow light, Bey and Preservation were expanding the room like it was a star, decondensing it, aerating it.

Growing up, I often felt that Mos Def would string rhymes and spit flows, sometimes, on the principle of what felt pleasing. Because I couldn’t always grasp the semantics, it was the syllabic taste of his words and how they sculpted to the backbeat—all that made sense, all that felt pleasing. So I nodded my head. I thought his music contained a promise: that one can create and speak from a place of pleasure without penalty; that self-indulgence doesn’t always mean solipsism, and can actually be beautiful.

It’s pretentious for me to claim Bey’s lyrics are, now, immediately decipherable to me. That their meanings are now totally legible because I’m no longer 13. Still, even as a kid, I knew there were substance and context baked beneath his style. I had a wordless intuition that I was implicated in what Bey was rapping.

Ten years later, nodding my head at Lemons Bar, I’m feeling the same vexation I felt as a 13-year-old. Criss-crossed between the pure pleasure and the clarion call-to-action implied by Bey’s music.

Meanwhile, a funny and fraternal detente had been ironing out between the 30-person audience and Yasiin. He crooned cheerily into his mic, two turquoise rings shining on his right hand, “It’s always better among friends. It’s so much better when it’s as real as you all!” referencing, perhaps, the no-cell-phone and unmediated conditions of the performance.

He touched and refracted from the audience’s arc formation, playing with us like a kid plays with magnets. Invoking his no-phones policy, Bey reached affectionately towards a woman with her phone stretched out. He smiled as if to swoon her, then gently lowered her arms. In another segment, still never breaking his flow, Bey pointed to a string of audience members in one fell lasso—you, you, you, and you too. They were all recording and watching Bey’s and Preservation’s magic through a screen. Why not enter and feel, as it were, the magic? Why not leap into the zone instead of bifurcating from it via the effort and time spent proving you were proximate to it?

For the Brooklyn Museum iteration of Negus, artists Ala Ebtekar, Julie Mehretu, and Jose Parla in collaboration with Bey, have all contributed artwork made in direct response to the album.

At another occasion at the Wythe hotel, Yasiin Bey, Parla, Ebtekar, and Third Line director Sunny Rahbar discussed their contributions to Negus, and reflected on the significance of its current site. In passing, Jose Parla remarked that Brooklyn and the hip-hop culture it pioneered “changed, and is still changing the world.”

I nearly ignored Parla’s emphasis on the cultural and worldwide impact of Brooklyn, until I remembered my own situation. I’m not from Brooklyn though I’m here now, writing this piece because I was drawn to its hip-hop mythos, advanced largely by Yasiin Bey.

And then, upon exiting the Wythe Hotel, I met a tech-professional in his mid-40s from Montana, who recently moved to Fort Greene “on a kind-of hip-hop pilgrimage” guided by Bey’s music. 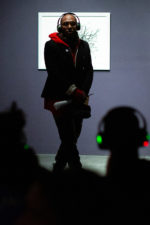 Images courtesy of the Brooklyn Museum

Three nights later, I was leaving a live performance of Negus at the Brooklyn Museum. Just like the Negus installation, we were asked to silence and lock our phones in a Yondr case. While repowering my phone in the lobby, I happened to run into that same tech-professional. He told me more of his story, an incredibly moving tale about the reach of Black on Both Sides, and how Bey’s music has motivated and inspired his healing.

I can’t promise that the total Negus experience will blow everyone away, although one can’t measure its worth in one, two, or however many listens one can afford. The Negus artwork and music meld cosmically. Ecosystems of smattered whistles, Atari synths, adlibs, and 808 drums—the music’s sonics are unlike anything Bey has recorded.

By virtue of its 28-minute length, Negus is not designed to be the opus to end all opuses. It lacks the epic, twisting, goodness gracious effect that a Black on Both Sides, or, say, a Kendrick Lamar LP has. But like a pocket-sized prayer book, its concerns are timeless, its value will reveal itself wherever it travels.

Some have twiddled thumbs at Bey’s low-profile whereabouts, some grumble that his flow has failed to match the pre-millenium Mos Def— the MC who once traded verses with Talib Kweli in the legendary duo Blackstar, and shook the hip-hop underground with Black on Both Sides.

Though it’s not always backed by a lip-smacking boom-bap beat, that flow still bubbles in him. It surged up on a dimly lit and dreamy night at Lemons restaurant; it resurrects on a song like “Waves” from Negus, in which Bey paraglides with a verse, silkier than ever, over soul sample production.

“Bey, the same MC who can teach a suburban sixth-grader how to properly spend his gift card money, or prompt pilgrimage in a mid-forties Montananite, continues to reimagine himself, hip-hop, and now music consumption.”

But even when Bey departs from the tried and true, we should expect nothing less. For in his early days, the way he mutated and married his flow delectably to backbeat rhythms assured us that Bey was, much like hip-hop music, a protean creature. Shape-shifter, unbeholden to who he’s been, and who his standby listeners want him to be. Leaping out of preordained boxes, not for want of attention, but to feel freedom’s renewal.

Yasiin Bey’s music has always ridden the tension between identity and the infinite. Yes, we each have a singular carnal existence with a social location; and also, yes we are dust particles drifting in interstellar soup. Ensnared by identity and also, metaphysically supple. Black on Both Sides is this paradox, making gyroscopic shifts between body and soul, all scored to some seriously bumpable, 5-star production. Although it’s the opening track “Fear Not of Man”, that suffuses the album with Yasiin’s thesis and his faith—“Mind over matter and soul before flesh.”

Bey, the same MC who can teach a suburban sixth-grader how to properly spend his gift card money, or prompt pilgrimage in a mid-forties Montananite, continues to reimagine himself, hip-hop, and now music consumption. Visit Negus and you’ll find yourself, once more, tightrope walking Bey’s affinity for the body-soul balance beam. Though wherever his music finds or moves you—Barnes and Noble, Brooklyn, Saturn, or the Milky Way—trust that the message will be prophetically familiar. 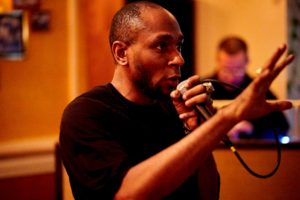 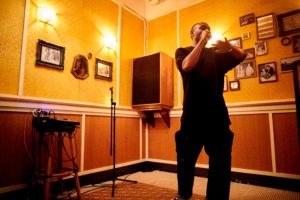 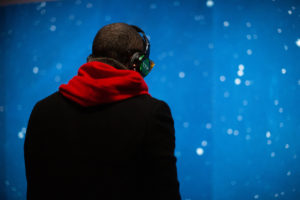 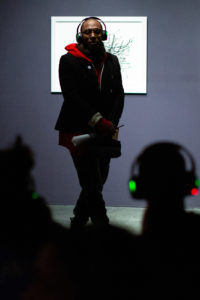 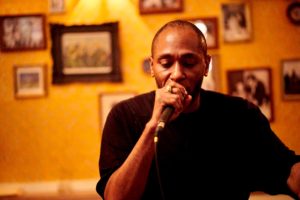