The artist formerly known as Mos Def released Negus at Art Basel in Hong Kong—but you could only listen to it if you were there.

As I perused through the art-filled booths of Art Basel in Hong Kong on its Private View Day—the preview day reserved for collectors, media, and other assorted VIPs—a fellow journalist named Monica Salazar told me the most random thing: “Mos Def is having a listening party at Art Basel,” she said.

“He’s doing it with The Third Line,” she responded, referring to the Dubai-based gallery.

“What?” I repeated, still confused by the idea of the rapper—whose music played a prominent part in the soundtrack of my youth—releasing an album at Art Basel in Hong Kong, of all the places in the world.

We immediately rushed to The Third Line’s booth, which was filled with a series of blue photographs by Farah Al Qasimi; Youssef Nabil’s portraits of Catherine Deneuve, Alicia Keys, and David Lynch; and the electrifying works of Hassan Hajjaj. Sunny Rahbar, the art dealer behind the gallery, explained it: Yasiin Bey is very aware of society’s inability to focus on anything because of technology. So, Bey, the artist formerly known as Mos Def, who was named Dante Terrell Smith by his parents, wanted to release his latest album Negus in a context where the listeners had to actually focus on the music. Negus isn’t brand new; it was produced by Lord Tusk, Steven Julien, and ACyde; recorded in London in 2015; and named after a royal title in the Ethiopian Semitic languages. Attendees of the listening sessions would lock their phone in a Yondr case, creating an environment where—instead of taking photos to post on Instastories, scrolling through Instagram, checking emails, and text messaging friends—they could actually focus on the music as it was played on headphones. The time was right; it had been 20 years since Bey released the seminal 1999 album Black on Both Sides, and a decade since he released Ecstatic.

Rahbar then told us about the genesis of the collaboration: Bey paid a visit to The Third Line at Alserkal Avenue in Dubai and he liked the program. The subject of his music came up. He told Rahbar about Negus, and said he had been looking for the right platform on which to release it, and that he wanted to do it through the context of art. The partnership was born, and after an initial friends and family listening session at Hajjaj’s riad in Marrakech, they decided to make Negus’s public debut an ephemeral experience that would only last when the record was actually being played, eschewing the traditional methods of digital distribution on Spotify or Apple Music or putting out a tangible product like a record or CD. Bey would then photograph listeners with a Polaroid camera and they would have the option to purchase the portraits, as a souvenir of the occasion. I’ve never experienced an album in that way, so I immediately signed up for the first session the next day. 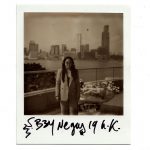 I arrived at the first floor balcony at the Hong Kong Exhibition and Convention Centre at 3pm on March 28. The person at the desk instructed me to put my phone inside of the Yondr case, and handed me a playlist comprised of eight tracks. Rahbar and Bey emerged, apologetic about the 77-degree humidity. Bey told us he wanted us to be present in the moment and focus on the songs, which had titles like “Dream Study,” “Hemp,” and “Day Trippers.” I sat on the balcony and stared at the KAWS sculpture floating in the glittering water and boats passing through Victoria Harbour while melting under the Hong Kong sunshine. When I wanted to take notes I realized how dependent I had become on my phone. I use it for note taking, recording interviews, and taking photographs so I could remember things. Without it, I only had my memory—and the black kajal eyeliner in my makeup bag. Why did I not bring a pen? I asked myself in frustration. Negus contained all the elements of Bey’s music that caused me to admire it in the first place: intelligent lyrics and beats that made me want to dance. “I take the space, I take the time,” was one of the lines I sloppily scrawled in eyeliner on a piece of paper. Space and time are both things I definitely need more of in life. The beats were synth-heavy and electric. Towards the end, one of the listeners smiled after the sound of cymbals banging together went off. “This is good,” he announced. We were sold.

After the album finished, Bey reemerged with a camera (he has been experimenting with photography, and large scale prints were available at the fair) and fans thanked him for the experience, telling the artist how important his music was to them. I asked if he would speak to me about Negus. “No press just yet,” he politely responded. “But stay in touch with Sunny and I’ll reach out to you.” He did say that he wanted it to be a focus and listening experience, akin to a music salon. Those not in Hong Kong may have a chance to listen to Negus in the future at a future listening session (there is currently an iteration in Dubai at The Third Line through April 20). I had so many questions in my head. Has the record album turned into a form of sound art? Will Bey be selling it as such?

I left, planning to return the next day to purchase the photo, without the ability to recall what I just listened to by searching for it on Spotify. For those 26 minutes I was in the present without my phone to distract me, listening to Negus. Despite the heat, it was a nice break from the chaos of Art Basel in Hong Kong, a chance to hear new work from an artist whose work I respected for nearly two decades, and an opportunity to actually be there, in the moment, to enjoy it—something I need more of in this technology-dependent world that’s full of distractions. 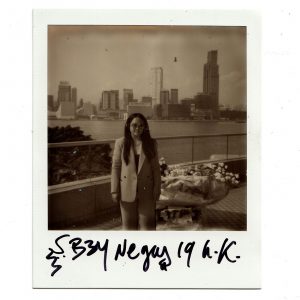