A Palestinian-American artist ruminates on intersecting identities at his “new home” in Tel-Aviv.

Every year since 1908 people have flocked to a giant exhibition in London to revel in interiors porn. The event is called The Ideal Home Show, and is intended to seduce and arouse design fetishists through its juxtaposition of idealized kitchens and living rooms and bedrooms. Each decade reflects the aspirations of its time—in the 1960s you could tour “a home in space”; in the 1970s visitors ogled at home saunas and groovy lava lamps. The show is a fantasia of how perfect life could be if you had the means to create the domicile of your dreams. The fact that most people don’t have the means is not the point. Dreams aren’t designed to come true.

At the Center for Contemporary Art in Tel Aviv right now you can see another take on an ideal home—this time created by Jordan Nassar, a Palestinian-American artist widely acclaimed for his fantastical embroidered landscapes. For Nassar, who has an actual home in Brooklyn where he lives with his husband, Amir Guberstein, the exercise in imagining a dream apartment has nothing to do with futuristic appliances or luxury wall hangings. Instead, it’s freighted with questions around identity, nostalgia, and belonging. What would his apartment look like if he returned to the land of his grandparents—not in some hypothetical future, but in the here and now? The answer is surprising, moving, and deeply satisfying.

In “The Sea Beneath Our Eyes,” a studio apartment is fully furnished with items that Nassar has made in collaboration with local craftspeople, from textiles woven by Bedouin Arabs to baskets by Ethiopian Jews, to ceramic tiles from Armenians in East Jerusalem. While the apartment is distinctly his—there’s a copy of The Odyssey on the bedside table—it could also be any number of apartments in Tel Aviv or Jaffa, an apartment that reflects in its furnishings the multiethnic melting pot of the region.

For Nassar, the apartment expands on his interest—exemplified in his embroideries—of interrogating the complexities and nuances of his identity. What emerges from the exercise is a soulful meditation on community and co-existence. “I wanted to think about returning to this land now, in 2019,” says Nassar. “It’s not the Palestine of my dad’s imagination, and it’s also not the Ashkenazi dreamland that the Israeli government wants to project. So, I thought the best way to address the question of what I’d be returning to now is to look at the demographics of the country based on what crafts are here.” 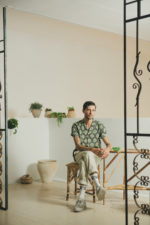 Those crafts include challah covers hand embroidered by Ethiopian women, a carved wood mirror from Gaza, tiles made in Jaffa, ceramics glazed by Armenians in Jerusalem, and olive wood tableware made in Bethlehem. There are even bamboo geodesic domes from a kibbutz in northern Israel. In each case, Nassar has collaborated with the artisans by specifying a few requirements, but leaving the rest of the design choices to them. It follows a pattern he’s established in his own art—commissioning Palestinian craftswomen to embroider areas of a canvas in the colors and style of their choosing, but leaving an area blank that Nassar completes at his studio in Brooklyn. The result is a kind of multi-level collaboration that functions as a dialogue—in his case between a diaspora Palestinian, and a Palestinian in the homeland.

“I want to leave as much as possible up to them because I want to capture the tendencies of the living cultural tradition and practice,” says Nassar. “So, when I get the piece back, and there’s an empty space smack in the middle of it, I respond to their aesthetic choices, and finish the piece accordingly. It becomes a nice back-and-forth.”

The same back-and-forth is evident in “The Sea Beneath Our Eyes,” but the dialogue has expanded. Nassar’s interplay with the designers reflects the broader dynamics in the country—a hundred daily interactions between people of different faiths and backgrounds. “I’m hoping a lot of Israelis walk in here and say, ‘I have a bowl like that, I have a basket like that,’” says Nassar. “They might think of it as an ethnic thing they got at a market, but my point is that from the outside it’s an Israeli thing now—the Ethiopian ladies are Jewish and they live here, now.”

The symbiotic relationship between different people harkens also to the region’s long history as a trade route, which predates the political complexities of the modern nation state. For that reason, Nassar avoided listing countries of origin in the zine he created to accompany the show’s opening, choosing to list only cities. “I’m not ignoring the political differences between Palestine and Israel, but for this project that’s not what I’m talking about,” says Nassar. “I’m talking about it more holistically—the river to the sea, the land where my ancestry is from. Over the past 1000 years control and the name of this land has changed so many times that I’m ignoring the temporality of nation states. “In Israel there are Bedouins and Druze—people who, for many thousands of years, it’s never mattered to them who was controlling the land.”

The observation illuminates a question that runs through Nassar’s work. On the wall of his apartment at the CCA is a hamsa, an amulet in the shape of an open palm that is popular in Arab countries and Israel as a defense against the evil eye. Who appropriated who? And does it even matter? For Nassar, the concept of cultural appropriation in a part of the world where cultural identities are so enmeshed has limited value. He finds the binary division of Israel and Palestine into Arab and Jew equally problematic, pointing out that half of the Jews in Israel are Mizrahim—Jews from Arab countries. Like Arabs, they have been systematically excluded by the white Ashkenazi establishment, albeit to different degrees. In the 1970s, he points out, the Mizrahim even had their own Black Panther-style movement.

“Arabs and Mizrahim are not supposed to mix, because if they were to form one group it would way overwhelm the Ashkenazis,” he says. “People will throw things at [me], [saying], like, ‘The Mizrahim are actually the most right-wing,’ and I’m like, ‘Yeah, because they have spent generations trying to prove to Ashkenazis that they’re not Arabs so that people don’t treat them like Arabs.”

Nassar, who is included in the new Whitney Museum show, Making Knowing: Craft in Art, 1950–2019, can speak to the historical interplay between Arab and Jew better than most. Some years ago he discovered that his mother has Jewish roots in Poland, although she was raised as a practicing Catholic. Meanwhile his father, a psychiatrist, has spent chunks of his career in Gaza and the West Bank supporting traumatized children.

“The Sea Beneath Our Eyes,” is ultimately a study in layers of identities, waves of migration, the synthesis of cultures. But it’s also the story of Nassar told through crafts that speak to him. “It’s not a didactic exercise, like I came up with a hypothesis and I’m now trying to prove it,” he says. “It’s personal, it’s my experience, it’s my apartment. I feel in art you can do that, in such a way that people can’t get that mad at you because you’re talking about your life, your family. While concepts and notions in these exhibitions might be universally applicable they’re coming from a very personal space of my own experience. I have an Israeli husband, a Palestinian father, it’s just my life. No-one can hold that against me.” 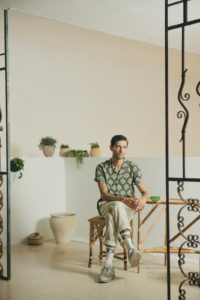 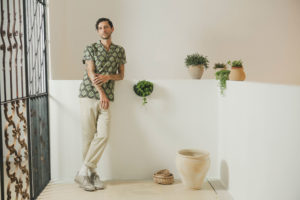