Laetitia Tamko does not consider herself a prodigy, but in just a few short years the Brooklyn-based musician has proved that her instincts were right all along. In 2014, while studying for a degree in engineering at New York’s City College, she also began playing music for the first time. Three years later, in March 2017, she released her debut album Infinite Worlds on San Francisco label Father/Daughter Records. The album was a turning point for Tamko; Pitchfork awarded it “Best New Music” and a month later she quit her job as a software engineer and began making music full-time.

Tamko was born in Cameroon and came to the US in 2006 when she was 13 years old. Her mother, a lawyer and entrepreneur, arrived first, and worked as a cashier at a Jamaican restaurant in Harlem in order to save enough money to bring her children here. Tamko joined her a short time later and had to adjust to the duality of having her soul in one place and her feet in another, while also working through everyday teen dilemmas like the physical changes happening to her body. “As a teenager, you’re very impressionable, you want to fly under the radar as much as possible,” Tamko tells me over coffee in Ditmas Park. “It took me some time to be like, ‘This is where I’m from, this is why I look this way, this is why I speak this way, this is my first language, I’m going to speak it more,’” she says.

Composed primarily on guitar, Infinite Worlds was raw and freewheeling. Tamko explored her own personal history as well as that of those around her (friends, family members, peers in the Brooklyn DIY punk scene that played a pivotal role in her development as an artist) with a plucky yet cautious eye. “Every song I’d ever written made it on. I didn’t have any reserves,” she says. By contrast, her new self-titled album needed time to marinate before blossoming into a majestic indie pop opus. The themes still manifest in the personal, but Tamko’s voice, which was often buried behind swooping guitar riffs on Infinite Worlds, is now delightfully dominant. Songs like “Secret Machine,” “In A Bind,” and “Every Woman” show her leaning into herself and embracing the pensive quality that makes her voice so striking. The growth between records is remarkable for someone still learning to trust their musical instincts. 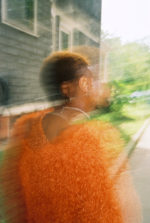 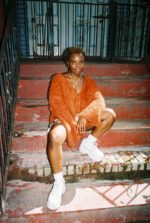 Nick Fulton—Your mother is an incredibly ambitious woman. What elements of her do you think you carry with you?

Laetitia Tamko—My mother came [to New York] so that she could attend an Ivy League law school. That was after already having a law degree in Cameroon and working [as a] cashier at a Jamaican restaurant in Harlem and saving up for us to join her. She’s someone who is so ambitious, and she expects no less from us. She started a business and had me work there—I worked 12-hour days when I was a teenager, and [at the time] I was like, ‘I don’t want to be here,’ but now I know that I’m able to be here because of the lessons I got from her. I think what she would say is that I’m like her but a lot more fearless, and that’s due to the privilege that she was able to give me.

Nick—As an independent artist you also need to be business savvy. Do you think some of the lessons you learned from her have helped you in your music career?

Laetitia—This is only sustainable because of those tools. You have to be good in so many other ways besides just making good music. Even playing underground punk spaces, I was always the person asking to be paid. You have to value yourself for it to work. I’m not afraid of someone saying no, because what’s the worst that can happen? I also don’t want to lean too heavily on [the idea that] I’m just happy to be here, so I’m not going to ask for any of the things I need. That’s something I learned from my mom, and from a lot of experiences in my life.

Nick—It is one of the contradictions of the DIY community, isn’t it? Money is often not a priority and when you ask for it, because it’s super important to your own survival, it can be met with surprise that you’re asking for it at all.

Laetitia—I don’t care if you think it’s not punk to ask for money, I don’t care if you think it’s not punk to need money, because that says so much about the position that you’re in. Even if you as an individual don’t have more than $200 in your bank account, you know that if you were out on the street, someone would help you, and that colors how you make decisions. Whereas if there’s no back-up plan, if it’s you or nothing, that makes you make decisions a lot differently. So whenever I would field those concerns I’d be like, ‘At the end of the day you can dye your hair back to a different color, you can go back to Connecticut and it’ll be fine, but you can’t tell someone who has nothing, who gave up everything, that they can’t ask for what they think they deserve.’ There’s nothing wrong with being rich, or your parents being rich or you being fortunate, I just think that you need to be self aware that not everyone is in a position to say, ‘No, I don’t want money.’

Nick—You graduated with an engineering degree and worked as a software developer before deciding to do music full-time. How hard was it to choose between those two things?

Laetitia—I don’t think I ever took a second to think about it. I was always told growing up that you can love music all you want, but you can’t go to music school. Now I get it, but I was upset at the time. My parents didn’t bring me here as a refugee for me to say, ‘I want to go and make art.’ So engineering for me was an exercise in what my mom always told me, which was, ‘You can do the hard work now and you’ll graduate at 22. Then you’ll have your whole life to do this other thing.’ So that was very much my thinking in going to school. When it actually came down to it, it was really easy because I was choosing what I wanted to five years prior.

Nick—Are there things you learned as an engineer that inform your artistry?

Laetitia—The first thing you’re taught in engineering school is that engineers are problem solvers, and in music you encounter a ton of problems. I was taught how to fail and to get right back up. It’s all about the consistency of the work, and that very much plays into music. There is one thing that I know wholeheartedly, which is that I’m not afraid of failing and looking bad. I looked bad all throughout school. I had to, because that’s the only way you learn.

Nick—After you made the decision to become a full-time musician you entered a phase of not being able to create what you’ve described as ‘necessary work.’ What were you so afraid of?

Laetitia—Of not knowing how I did it the first time, and of not being able to make another record that did well. People are watching now, and that feels very different from when I would write songs in my room thinking that no one but my friends would hear them. I didn’t know how to do it again, and that was the feeling I had for about two years.

Nick—What did this album teach you about yourself?

Laetitia—With this album I had a lot of imposter syndrome. I’d make a beat and then make a song around it, but I’d be telling myself that my beat was temporary. I had to go through the process of employing a ‘real drummer’ to say, ‘Actually, no, the [original drum beat] was exactly what it needed to be.’ Throughout this whole process I learned that I need to trust that I know what I’m doing, and that what I’m doing needs to genuinely come from me. It doesn’t need to be orchestrated and it’s OK if I don’t understand it, I just need to nurture it.

Nick—You’ve stated that the song ‘Every Women’ is intended not just to empower cisgendered women, but anyone who has ever felt marginalized. Can you tell me a little more about that song?

Laetitia—It closes out the record [before the reprise] and it’s my closing statement on my existence as a person, an artist, a daughter, and a sister. It’s an ode to my mother and my grandmother, all the women that raised me and that came before me. It took a village for me to be at this point now, where I’m closing my second album. I’m also expressing solidarity for people who feel like they’re unable to express the depths of their pain or trauma. I probably won’t ever speak publicly about my trauma, but this song is a way to say to everyone who has it, ‘I’m here with you.’ There is no hierarchy when it comes to trauma—Beyoncé got cheated on, so we are all the same. It’s really me wanting to say, as openly as I can, that some really serious shit has gone down and I’m fucking exhausted, but I’m keeping it together. It’s a vague way of starting to tell my story, which I am not sure if I will ever tell, but it’s me starting to say that there is one and I feel you—me too, her too, them too, all of us, too. This is my outlet and I can’t be silenced in my own outlet. 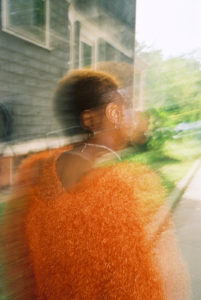 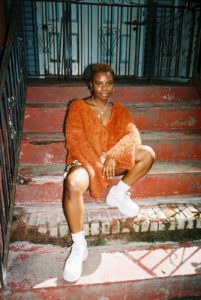 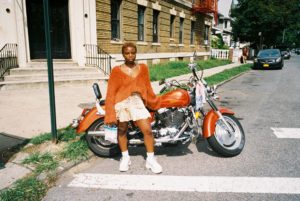