Sarah Sze shows Document around her Hudson Yards studio to see her exploration of the way people experience time through imagery.

What many people don’t know about the artist Sarah Sze is that her practice spans through several different mediums—painting, sculpture, video, installation, ceramics, photography, wood, and more are among those in which she works. Sze’s studio in Hudson Yards features various studios and offices stretched across a floor that are each dedicated to one of the mediums; there’s a room with a kiln for pottery and ceramics, printers for photos, a room with editing docks for video, as well as a tiny private room where she paints. The MacArthur Fellowship recipient and American representative for the 2013 Venice Biennale allowed Document Journal into her studio. Her installations are sculptural constellations, commenting on the frantic pace at which we consume images with a mixture of objects and imagery. Sze is also having a New York moment, with an exhibition at Tanya Bonakdar Gallery that closes on October 18, and she also has a work in the Museum of Modern Art exhibition, Surrounds: 11 Installations, from October 21 to January 4, 2020. Sze revealed the abstract paintings modeled after her multimedia sculptures and why it’s important to focus on the art itself.

Ann—So about this studio. How is it conducive to your practice?

Sarah—I’ve always had different spaces for different mediums. There’s video in one room, I have a kiln, there’s welding, there’s a woodshop, I have a room where it’s all photography and printers. Then painting, sculpture. My first show ever in a museum, at the MCA Chicago in 1999, was actually a video sculpture. But then I started really just showing sculpture. I’ve always had these little practices in other mediums happening simultaneously.

“I’ve always had these little practices in other mediums happening simultaneously.” 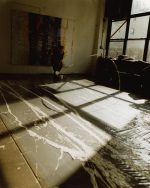 Ann—What did you study for your MFA? Did you have a concentration in one medium?

Ann—And you went to Yale for undergrad?

Sarah—Yes, I studied painting and architecture at Yale.

Sarah—Yeah, I left architecture pretty early and then I always did painting. And then I painted outside of school. I actually ran a nonprofit for children in educational systems that had very poor resources. Then I painted on the side, and applied to graduate school as a painter, went as a painter, and then my first year, basically started making sculptures. But then I always drew, and I painted, and actually all of these paintings are from drawings of my sculptures, which always seemed really weird. Isn’t that weird? It seemed very weird, but then I was just talking to John Elderfield and his next show is a Cézanne painting show and he was talking about how Cézanne always drew sculptures, which is a classic idea that you went to—you’d go to a museum and you’d draw the sculptures, so it was always like a translation of a sculpture into a two-dimensional form, which is a very interesting idea, because I was like, Oh, that’s what I’m doing, and actually it’s something that’s almost a classical idea about how you study composition and form in a sculpture and then translate it to two dimensions.

Ann—Is there a medium you gravitate more towards than the others?

Sarah—It’s interesting, well that’s a good question, because I remember when I started making sculptures someone said to me, ‘Well are you a sculptor or a painter?’ And I was like, ‘well I’m both.’ And they said, ’But there’s only enough hours in the day. So like, you end up doing one or the other.’ I remember them saying that. There’s a painter who I studied with at Yale, Andrew Forge, who said to me in a studio visit: ’There are very few artists who really are actually deeply both painters and sculptors. And you’re actually that.’ I didn’t realize that until later, that I feel like, people said, ‘Woah, you’re painting?’ but to me, it doesn’t seem different.

Ann—Tell me about the work in your studio.

Sarah—It’s going to be totally immersive when you walk into it. But before you get to it, there’s going to be this spray of light that comes, that’s going to be cast, it’s a video of a puddle outside of my studio that I took on my iPhone. But when you throw it in paint across the floor, live, it has this kind of sensation like light coming off the top of water.

Ann—So there’s going to be a projection?

Sarah—Let me show you. So this is the model for the room. But out of it is going to have this projection.

Ann—Oh this is the puddle.

Sarah—The video is going to be in here, so you’ll see from outside it, the video encircling the walls. But you’ll have this splash of light that pours out of the room, out of this room, and the space where you enter here will actually have this trickle of light. And the thing that happens when you video light and then you project it as a video, is that you have a sense that it’s live light. So you have the sense that it’s like a car running by on the street and casting light, you know how that happens. It confuses you as to what’s real or not. So I’ll have this trickle of light, so when you turn, they’re almost this trail of light that draws you into this space, and then you’re in this space, so it’s almost like a kind of magnetic draw into this space, and then the movement is like an eddy in a river that gets caught.

Ann—Have you showed your paintings before?

Sarah—This series has never been shown before. I did this idea of an archive, so I put everything in an archive on the wall. So everything…It actually mirrored my studio; so everything that was on the wall in my studio was 1:1 translated to the space.

Ann—Would you say that time is the main inspiration for these works?

Sarah—Time and the way we experience time through images in particular. The way we were, our memories could have changed because we experience through our images and when memory is associated as we know to sound and smell and touch. We probably remember the light and the color but they’re very abstracted so if we experience so much without texture how does it change the way we remember things and how do those become valuable. I’ve always been interested in things become valuable. The early sculptural work was very much about growing materials, trying and taking something that extremely easy to get, mass-produced, cheap in terms of cost, aesthetically cheap, almost undesigned and not made for an aesthetic value like a pin, a pushpin, its design that works for the thumb it’s all pragmatic, but then to take this into you own and try and vest some kind of value, and give an object to an object. Similarly, how do you create value in an experience? And to think about how things are burnt into our memory through an image.

Ann—The wall installation that is in the room next door with the photos and the projection on top of that, looks timeless and seemed like they were all snippets from your memory.

Sarah—So this one is mostly from my iPhone going on the Amtrak from New York to Boston out the window, you now you can do so many amazing things on your phone now. film is so much easier to do, one of the reasons I stopped making videos back [after my show at the] MCA Chicago, it was just so hard to do, and so expensive. You needed equipment and you needed to work with other people. Now you can make an entire film on your iPhone. It’s interesting that you thought they were memories, they all have to do with measuring time or measuring materials. When you’re at a train, you’re almost tracking time and space in real time, which you so rarely do. You kind of have a mesmerizing experience in a train, that kind of regular speed over time and space. All images are edited into one.

Ann—What are some of the other snippets of time that you’ve captured?

Sarah—Well it’s either time or materials because I was interested in trying to make images feel material. The paper is ripped so you realize it’s paper, it’s not just an image. It’s just to break away from that idea that you’re in a movie, when you walk into a movie theater you kind of just say, ‘I’m in a movie!’ But to be reminded of the theater of it, right? To be lulled into that and then be like it’s just a piece of paper, it’s just smoke.

Ann—What about the small globe-like sculpture?

Sarah—This is based off a shape of a basketball, and the reason why a basketball is interesting is because it’s scaled to the hand and the body, right. It has to be that size. I like this idea of anything I do sculpturally is thinking about how it relates to your body. Basically it’s this head-space, the space of a skull in your head, scaled to a head. So when you’re looking at it, it’s almost looking at someone’s brain, scaled to that size.

“There’s a lot of focus on the systems around the art and that undermines actually looking at art and talking about art.”

Ann—What would you say are the biggest issues with the art world at the moment?

Sarah—I think it’s important to focus on the art itself. There’s a lot of focus on the systems around the art and that undermines actually looking at art and talking about art. All those things that are built around the object or the work and there’s a huge pile around it, if everything could focus on the artwork it would be a much more interesting conversation. When I think about making art now, what is helpful to make work that gives artists other space, make work that creates a kind of space or language that could be interesting for other artists to make work. That’s the kind of way that people in science think, you do you work so it broadens the field and the whole conversation becomes more interesting. 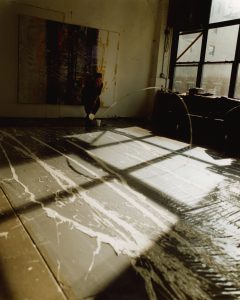 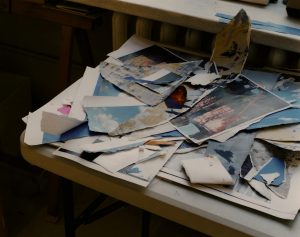 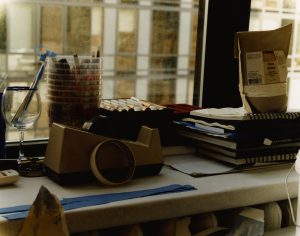 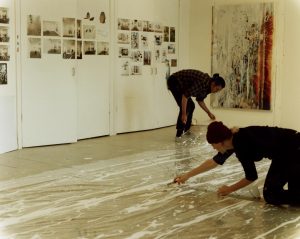 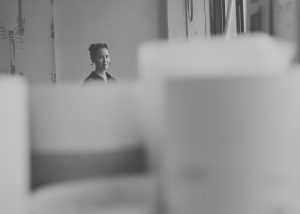