“What I’m interested in…is the possibility, as our protest showed, that you can take 5,000 people and change the course of history.”

It’s sometimes all too easy to feel defeated by the scale of a challenge, particularly in times when our political leadership feels so debauched. As Elizabeth Rush, a Pulitzer finalist for her book Rising: Dispatches from the New American Shore, says in the conversation she moderates between Roger Hallam and ACT UP’s Peter Staley, protests can sometimes feel ineffective. How do we make our actions count? Yet if history has a valuable lesson for us, it is that individuals do make a difference, even in the face of overwhelming odds. It starts by asking the right question, or by choosing to show up when it matters. In his conversation with Staley, Hallam reminds us that change always begins with a few dedicated activists until their aims and values become so commonly held that it’s inconceivable that anyone ever thought otherwise.

For Document’s Fall/Winter 2019 issue we explore the difference that people can make when they ask the world’s oldest question: Why? Why this way and not that way? But before we can move forward, we need to look back and take stock of the movements, ideas, and institutions that have defined us. And what do we find when looking squarely in humanity’s rearview mirror? That with action, intellect, creativity, and choice, we can build a better future, filled with voices from every background.

While the demand for diverse perspectives and voices is transforming arts and culture and overturning outmoded tropes, Booker Prize-winning author Marlon James and Queen & Slim star Daniel Kaluuya are taking it further by creating new mythologies in which black representation is recast in broad, heroic terms. And what might the world look like if the thoughts of women, rather than men, underpinned the legal and societal systems we have inherited? Cultural critic Roxane Gay, women’s rights attorney Gloria Allred, and scholar Siri Hustvedt reimagine the world from the female perspective. We simultaneously explore notions of modern masculinity, with actor Damson Idris, who stars in this fall’s powerful film Farming, based on actor-turned-director Adewale Akinnuoye-Agbaje’s teenage years as a member of a violent white supremacist gang, finding hope in the power of choice.

We look to the inevitable future of human life on the Moon in our Lunar Portfolio, for which we asked a selection of bold names across architecture, design, art, academia, and music to imagine what that new way of living will look and sound like on the rocky surface of the Moon. But while we look with hope upon a future among the stars, we cannot ignore the anthropogenic problems here on Earth. Laurence Ellis’s photo essay explores the Peruvian Amazon and Zambia’s Barotseland, highlighting the people living on the frontline of two of the planet’s most ecologically vulnerable areas as demonstrated by this year’s devastating fires and droughts. And since November 9 will mark the 30th anniversary of the fall of the Berlin Wall, we asked some of the artists most affected by it to share their remembrances of how a divided city impacted the lives of millions around the world.

The notion of looking to the future creatively is evident in our eight limited-edition covers, created by Willy Vanderperre and Olivier Rizzo, Craig McDean and Document’s Creative and Fashion Director Sarah Richardson, Mario Sorrenti, Inez & Vinoodh and Grace Coddington, Alasdair McLellan, Richard Bush, Hugo Comte and Robbie Spencer, and an extra-special limited-edition cover by Laurence Ellis that depicts the indigenous protectors of the Amazon rain forest and spotlights the cultures who are battling massive deforestation, apocalyptic fires, and the destructive influence of drug cartels.

In the early aughts, I started my career in magazines at the culture bible BlackBook, and recently it has come full circle, with Aaron Hicklin and Meg Thomann, BlackBook’s then-editor-in-chief and managing editor, joining the Document team as editorial director and managing director, respectively, ushering the magazine into a new era with their wealth of knowledge and experience. I’m hugely grateful for their guidance and visionary thinking. The future is always arriving, and it’s always just around the corner. In this issue, Document’s fearless team of contributors explores the hopes, fears, and certainties of what that future holds. 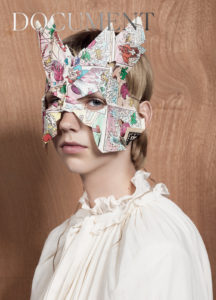 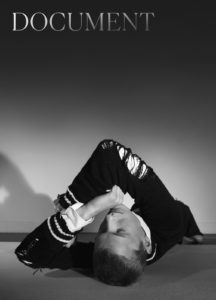 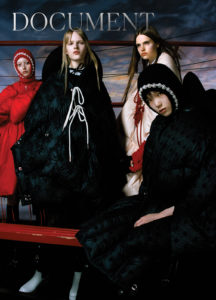 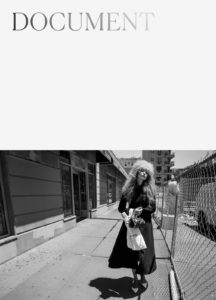 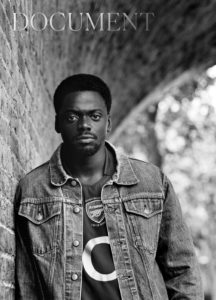 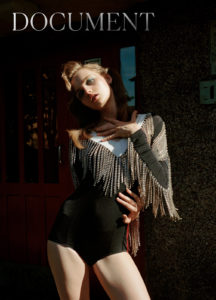 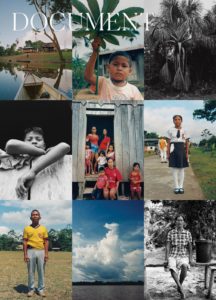 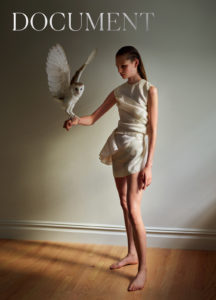