Helge Sten's first album in 15 years is an 'anti-fascist ritual' fueled by anger, empathy, and compassion

“In a time where knowledge and facts have never been more readily available, the human race seems to gravitate towards less compassion and empathy, and instead worship persecution, violence, and bigotry,” Norwegian producer and musician Helge Sten told me. His new album, Occulting Disk, under the name Deathprod, is, he says, an anti-fascist ritual. It is meant as “a conscious and deliberate action towards being able to deal with the unfathomable devastation that is in progress.”

You probably wouldn’t realize that Sten’s music is political on an initial listen. There aren’t any lyrics about fighting the power or how nazi punks should fuck off. Instead, Occulting Disk is one hour, six minutes of ambient, abstract noise. The 10 tracks drift between the sound of UFOs landing, distant sirens, and throbbing static. Space-age keyboard tones rise and fall into the murk. It sounds like a movie score for a terrifying, dynamic, transcendent event that keeps getting deferred. The album sounds both restful and like a call to action. Some tracks veer towards the ethereal, but the 12-minute “Black Transit of Jupiter’s Satellite” is an intense exercise in noise, with distant intimations of melody buried under grinding feedback blasts and the noise of great metal sheets being smashed together.

Sten began his musical career in the mid-80s, spurred in part by gallery sound art, and in part by the DIY experiments of industrial electronica innovators Throbbing Gristle and the parodic eyeball-masked oddballs The Residents. Sten didn’t use any acoustic or electronic instruments, instead relying on studio tools and audio processors to create his soundscapes. Deathprod was originally intended to be the name of a cassette label, but that never really launched, and instead Sten began using it as the moniker for his own solo work. His first album proper in 1991 is titled Deep Throat Puke Orgasm. It sounds like a field recording of someone welding and hammering steel at the bottom of a well.

“I think the movies of Werner Herzog had a big impact on me, in terms of inspiration for the Deathprod project,” Sten says. “The slow-motion footage he did in The Great Ecstasy of Woodcarver Steiner is breathtaking and haunting. By distorting time the way he did in those scenes, he changed my perception of composition forever.”

Sten has been active in a number of contexts over the years—his best known work is with the successful avant garde improv group Supersilent, which pairs Sten’s drones and noise with an experimental jazz trio led by trumpeter Arve Henrikson. But the music associated with his Deathprod project in particular has been rare and slow to gestate. Sten doesn’t tour much with the project, because most concert venues don’t have the technical equipment he needs to create his compositions. The last Deathprod release, Morals and Dogma, came out way back in 2004, 15 years ago.

“Deathprod has never really been a part of the music business, even though I have utilized some of the music business infrastructure to distribute my music,” Sten says. “There is no urge or need to make an album every year and then go on tour for five months.” He adds, “Every album had been a slow-moving, complex, and difficult process.”

The name of Sten’s latest album Occulting Disk, refers to a disk used in a telescope to cover over a bright object so that dimmer objects can be seen more easily. Sten says he chose the name for the album because “I think this is a good metaphor for observing life.” It’s a particularly important concept now, he says, because, “We need to apply tools to be able to see reality. It is no longer readily visible to us. Empathy and compassion are not very brightly lit objects these days.”

Usually, Sten doesn’t like to define the meaning of his music too specifically. He’d prefer to let listeners explore the sounds for themselves, and come up with their own meanings and interpretations. In this case, though, he wanted to state in words that Occulting Disk was an anti-fascist ritual, “Not to clarify why I made the music I did, but to present the idea of a personal ritual that can be utilized as a tool by everyone.”

An anti-fascist ritual, Sten says, “is a different process than simply criticizing or speaking to fascism.” The album for him was a way “to deal with the almost physical sensation of being immersed in fascist infrastructure.” That infrastructure “is being installed around us, mentally and physically, on a daily basis.” Occulting Disk is a response that’s both angry and meditative. It’s both an assertion of private aesthetic autonomy from political oppression, and a blaring rebuke.

“I call Occulting Disk an anti-fascist ritual to emphasize that we need to address this with deliberate and conscious action on a daily basis,” Sten told me. “I have never experienced the level of fascism that we see today, and the unfathomable is becoming a reality.” As singer-songwriter Will Oldham wrote in his liner notes to the album, “If you hear hate in the voice of another, it is your job, as the identifier, to address that hatred and reduce it by its opposite.”

Occulting Disk is an odd, eccentric, beautiful response to a fascist order that seeks to crush oddness, eccentricity, and beauty. If fascism demands uniform ascent, it makes sense that Sten’s resistance is a strange and lovely noise. 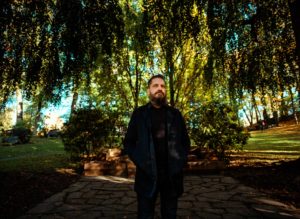