The artist spoke to Document about combatting misconceptions and what it's like to see your art auctioned for half a million and not see a cent.

Three weeks before Frieze Week, Tschabalala Self was in the middle of preparing for her new exhibition, Thigh High, at Pilar Corrias in London when Document showed up to her New Haven, Connecticut studio. Giant papier-mâché legs, still white from a fresh coat of paint, stood in the middle of the floor. Large canvases that star individual figures, stitched together from an assortment of fabric and paint, surrounded the walls of her studio unfinished, waiting for a colorful backdrop to be added. Near the door, a pair of thick red legs with their ass cheeks in the air wearing papier-mâché boots. Self’s subjects comment on the way the black female body is racialized, gendered, and sexualized. But, unlike society at large, where white privilege dominates, the Harlem-born-and-raised artist holds the power in her studio, shaping the way the bodies are seen. In a way she liberates black female figures from the societal pressures that surround them, depicting them as poised, powerful, and ready to take on the world—big ass, thigh-high boots, and all.

Self moved into the space with a group of studiomates fresh from Yale’s prestigious MFA program, which she completed in 2015. Little by little, as the others left, Self’s trajectory started [and continues] to rise, and she found herself able to handle the rent for two spaces across the hall from each other. With Frieze Week currently underway, Self has a full schedule, complete with a party at the new Standard King’s Cross, her opening at Pilar Corrias—the show runs through November 9—and a talk at Frieze on October 6. When Document paid Self a visit, the artist discussed her feelings on breaking her auction record at Christie’s over the summer, why she chooses to work and live in New Haven, and how she defines black identity in her work.

Ann Binlot—It’s cool how you went from sharing this studio with a bunch of people to being able to afford it by yourself. When did you get the other space across the hall?

Ann—Did you lose any work?

Tschabalala—It was such a weird experience. I didn’t lose any work. Some works were damaged, but they were able to be repaired, but all my stuff was ruined. Luckily, the fabric could be washed. The old industrial sprinkler pipe—that one right there—God knows what was in that pipe, but see the dark stuff on the wall, all the water stains? Dirt and water were all over the entire studio and all of my stuff. I had just paid for other another space in this building. It was the worst timing. I was in Paris when the flood happened. I ended up having to clean the whole studio once I returned. All the stuff from my old studiomates, stuff from graduate school, was thrown out. It was like a baptism of sorts in the end, the studio emerged anew after the purging. After that flood, I built the space out like I had always wanted. I put in painting racks, bookcases, movable storage, and flooring. The space has been more productive since the flood—and a lot more flexible. So, even though it was a devastating experience, ultimately, it was for best. 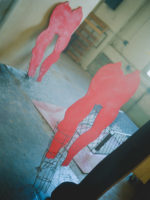 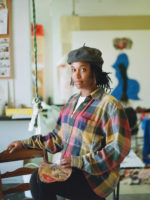 Ann—Why New Haven? Would you ever locate your studio back to New York?

Tschabalala—I originally thought I was going to move back to New York, but I feel in love with my studio here. So I never ended up moving back. It’s been really good for me working here. It’s very affordable, comfortable, and quiet. There’s a lot of privacy, I have a lot of space, and the price—it’s hard to beat. New York would be very expensive, and the idea of moving all my stuff sounds chaotic because there’s so much that goes into moving for an artist. I’d have to move myself and my work—as an artist you generally have two spaces always, where you live and where you work, and I never had the time to move either. I’ve been able to take more risks with my practice and spend more time on my work because I don’t have crazy overhead or rent to worry about.

Ann—What do you think about the class divide here in New Haven?

Tschabalala—I have never really thought about it, I live in the hood out here. Plus I am not from here so I do not really understand all of the dynamics; but being from not such a dissimilar place, Harlem, I can speak from my own experiences and say that the class divides in all American cities are becoming worse.

Ann—How did you feel when you broke your own auction record this summer, with your painting Out of Body, which went for £371,250 ($456,823) [five times its high estimate] at Christie’s?

Tschabalala—I was shocked by it. I don’t really know how to feel about it yet.

Ann—Doesn’t it drive your market up?

Tschabalala—It drives my secondary market up. 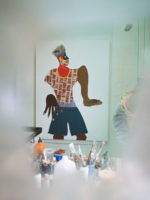 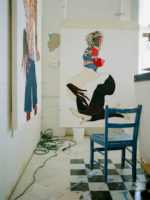 Ann—Yeah, and you don’t get any of that.

Tschabalala—That’s the thing. I don’t get any of it.

Ann—Obviously, whoever acquired it [initially] flipped it.

Tschabalala—Yeah, whoever owns the work, they get all the money from the auction. I don’t have much of an opinion about it because I don’t benefit at all from the sale.

Ann—Not financially, but isn’t it good for your market?

Tschabalala—More time has to pass to say so definitively. It’s not quite clear yet. It’s too early to know.

Ann—What about the Louis Vuitton collaboration? How do you feel coming off the heels of that?

Tschabalala—I was really happy that I was able to do that. That was a unique experience for me and an opportunity to do something different. I enjoyed working with Louis Vuitton. It exposed my work to new audiences and allowed for my practice to exist within a new context. As a maker, it was a fantastic challenge and brought me out of my comfort zone.

Ann—Are we going to see more fashion collaborations from you?

Tschabalala—It depends on who would reach out to me. When Louis Vuitton reached out to me it was an obvious yes. I felt confident about the collaboration because there was room for me to exercise my sensibilities within the structure of that brand. So if it’s another context like that, I think it could work. 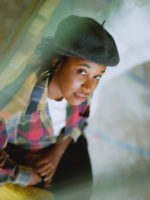 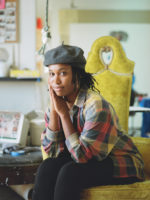 Ann—Tell me about your upcoming exhibition at Pilar Corrias.

Tschabalala—The title of the show is Thigh High—all of the works here will be on view. A repeating motif is a heeled shoe. The majority of the female figures have on heels, and the sculptural works echo this silhouette. With a lot of the titles for my shows, I try to invoke a part of the body, ‘thigh high,’ I thought, was a nice shorthand, something that could easily set a tone and attitude.

Ann—Who are these women that you are portraying?

Tschabalala—They come from this pantheon of imagined figures. What’s unique about this body of work—different from the last series I did, the street scenes from the MoMA PS1 show or my Bodega Run project— is that these figures are not situated within any particular environment, or within any particular narrative. All these figures came together from pulling from my studio scrap. These pieces are rooted in my formal practice rather than having been developed out of narrative concerns. The new works look and feel different for this reason.

Ann—What are the intentions and nuances that you are trying to communicate in your work?

Tschabalala—It used to be easier for me to name them because they were tropes or ideas that were generally ubiquitous within certain dialogues around identity, politics, and social justice. As I’m developing as an individual, and as the world is becoming increasingly complicated, I can’t just rattle off all the intentions I have for my work. Ultimately, I’m trying to portray multi-dimensional figures that speak to a human experience in a humane way. I am also typically speaking from my experience, as a black-American women. Many of the topics in my work are unique to this sole experience, but some of the concerns within my practice use that experience as a framework to speak about existential concerns, in regard to desire, vulnerability, and power. 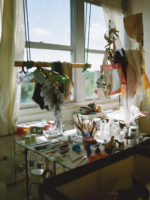 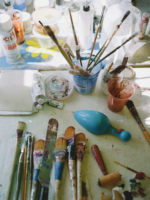 Ann—You’ve traveled so much around the States and the world now. How do you see attitudes towards black identity change depending on the location?

Tschabalala—Some ideas toward black identity both nationally and internationally have become more regressive. However, I do think that within the global black community there has been more progressive attitudes developing in regard to how blackness is understood and championed. I see pride and an interest in learning truthful histories. I am increasingly seeing blackness being spoken about in relation to itself and not in opposition to ‘other’ which I appreciate. Through continuing to center blackness within the narrative of black identity, I believe the attitudes of the other will become increasingly unimportant.

Ann—How did being a black woman who grew up in Harlem shape who you are?

Tschabalala—In every way, I have no foil to that experience. So I can’t say it affected this part of me, but not the other. It has affected every part and every aspect of my life—along with every other experience I have ever had.

Tschabalala—The goals are to have the work continue to be a bigger part of the cultural dialogue. There are many overt and subtle campaigns that exist to spread misinformation and disinformation about womanhood, blackness, and being in general. I hope to combat these messages thought my work. I aspire to at least validate the experiences of people who have lived similar lives to mine, and aid those individuals in their pursuits. I believe in cultivating positivity and optimism in my work. Above all else I champion the truth and seek the truth—I would like for my work to help others find theirs. 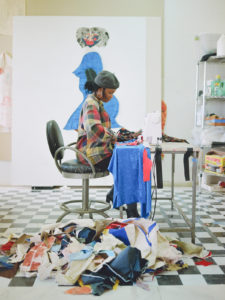 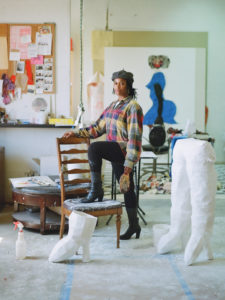 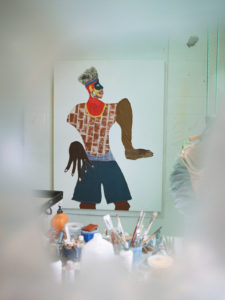 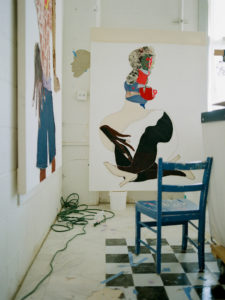 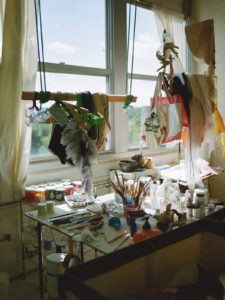 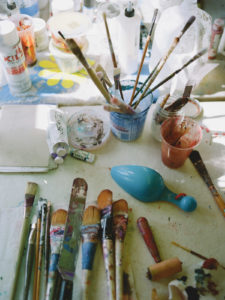 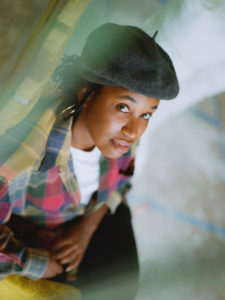 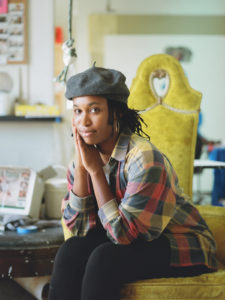 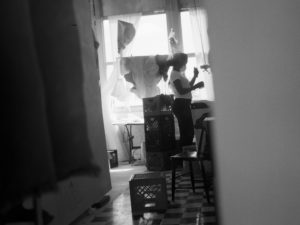 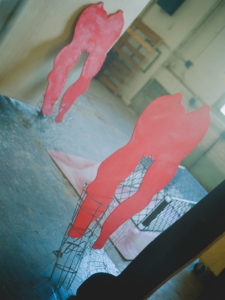 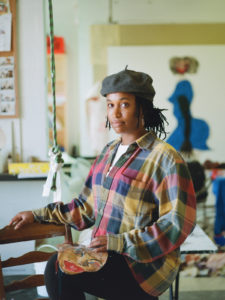 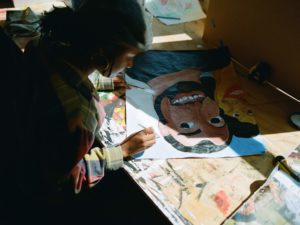 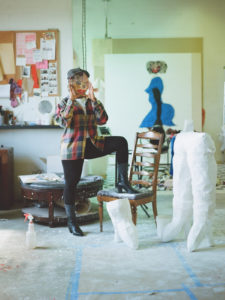