Last Thursday, art enthusiasts gathered at The Metropolitan Museum of Art for “An Evening with Great Women Artists,” a panel discussion moderated by Iria Candela, curator of Latin American Art, between Ghada Amer, Sharon Hayes, Deana Lawson, and Martha Rosler. The panel fell in tandem with the recent release of Great Women Artists, which celebrates the work of over 400 artists from more than 50 countries, spanning 500 years, in the most extensive book of women artists’ work published to date.

Great Women Artists not only hones in on the multimedia works that have brought women artists attention, it also tells captivating stories of the lives of each, allowing the reader to understand the broader importance of exposure to such creatives. It touches on  a wide range of visual art, from Lavinia Fontana’s “Minerva Dressing” oil on canvas made in 1613, to Betye Saar’s “Black girl’s window”, a wooden window frame with painted panels replacing its glass from 1969, and even highlights the work of performance artists such as Vanessa Beecroft’s “VB55 Performance,” a choreographed piece featuring female semi-nude dancers as living artistic subjects.

This book was created in partnership between Kering through its Women In Motion program and creative arts publisher Phaidon, after a chance elevator encounter between Kering’s Laurent Claquin and Phaidon CEO Keith Fox, who work in the same building. They offer this collection as a response to Linda Nochlin’s 1971 essay Why Have There Been No Great Women Artists?. Nochlin places blame on the educational system which historically excluded women from partaking in artistic programs. “It was indeed institutionally made impossible for women to achieve artistic excellence, or success, on the same footing as men, no matter what the potency of their so-called talent, or genius,” she explains.  “The existence of a tiny band of successful, if not great, women artists throughout history does nothing to gainsay this fact.” Phaidon, Kering, and the 23 contributing writers offer a different perspective, highlighting that gender and resources do not affect the artistic ability of these monumental creators, who happen to be women.

During the panel discussion last week, Martha Rosler, a multimedia artist, reflected on her experience being a part of the 1960s Womens’ Rights Movement and how that translated into her art. “This was a moment, in the early 1960s, where there was a huge amount of ferment about the position of women, before feminism re-ignited,” said Rosler, concluding, “I started to come of age at that time, where we were all thinking and talking about it, but it still wasn’t acceptable to be a woman making art.” Rosler’s experience coincides with that of Judy Chicago, another featured artist in this collection, who said, “the biggest compliment a woman artist could get was to be told she painted like a man.” Pat Steir questions in a video for Great Women Artists, “what does being a women have to do with being an artist?” She continues, underscoring the underlying groundwork of  Great Women Artists, “What makes great art…is great art.”

Arranged in alphabetical order, the book’s structure encourages readers to “put aside preconceptions about personally preferred styles and movements.” As the preface states, “with each turn of the page offering unexpected juxtapositions and connections between works from different points in history.” Each page is a new and interesting spread that represents the true variety of great art. For example, pages 150-151 place Artemisia Gentileschi’s “Judith Beheading Holofernes” oil on canvas from 1620 next to Isa Genzken’s “Rose” from 2007, a stainless steel, aluminum, and lacquer sculpture which stands at the MoMA; two pieces which would otherwise not be portrayed beside each other if not for this configuration.

In celebration of Great Women Artists, with the support of Kering and Phaidon, Artspace has launched a charitable portfolio of limited-edition prints to benefit the non-profit Promundo, a leading organization in promoting gender justice and violence prevention against women. The funds raised by Phaidon and Artspace will support the launch of a Boyhood Campaign and Initiative developed by Promundo, the Kering Foundation, and other partners focused on female empowerment.

The limited portfolio of prints, commissioned exclusively for this project, features six artists: Cecily Brown, Lubaina Himid, Bharti Kher, Catherine Opie, Jenny Saville, and Dana Schutz and one of each of their unique prints, in an edition of 100. 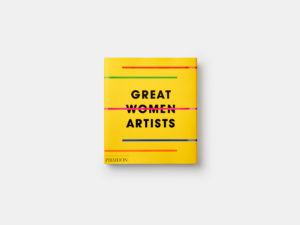 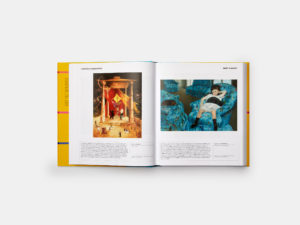 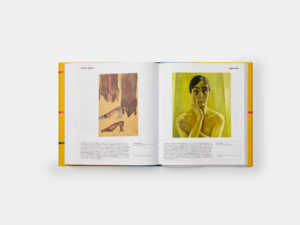