Catherine Opie creates a metaphor for the dying American Dream through the narrative of an arsonist burning Los Angeles's modernist structures.

What would happen if an arsonist torched all the modernist buildings in Los Angeles? Artist Catherine Opie explores that dystopian idea in an exhibition at Lehmann Maupin’s West 24th Street location in New York that’s on view through January 17, 2019. Titled The Modernist, the show features a 22-minute photo roman made of 852 black-and-white photographs—inspired by La Jetée, Chris Marker’s 1962 science-fiction film about post-apocalyptic Paris after World War III.

Opie tapped San Francisco-based artist Pig Pen, a.k.a. Stosh Fila, to play the film’s protagonist—a marginalized body under attack by the Trump slogan “Make America great again.” In retaliation, the lead travels throughout Los Angeles in a rage, torching the city’s iconic modernist structures, like John Lautner’s 1961 to 1963 Sheats-Goldstein Residence that was made famous in The Big Lebowski. He sneaks in and douses the buildings in gasoline. With each burning, the arsonist takes trophies in the form of news clippings he collects from each fire to include in a dark collage. Like Marker did in the ‘60s, Opie touches on themes like environmental collapse, global chaos, and the unraveling of political structures. 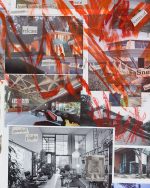 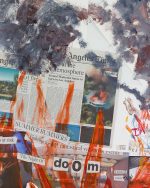 The photos and film are a symbolic portrait of the struggle to achieve the “American Dream” that became the commonplace goal of the 1950s, the era when these modernist structures were built. Each time the protagonist commits arson, it becomes a metaphor for the fact that in 2018, the American Dream is just that—an idea that cannot be achieved, especially with today’s murky political climate. 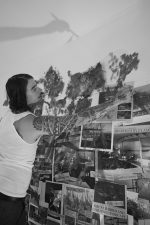 Opie targeted the stoic modernist structures because they epitomize the design of the mid-century, a time when the American Dream could still be a reality, even though race, gender, and class still kept people within certain confines. The body of work is the artist’s statement against the current state of the United States, a look at how the American Dream is in actuality, a nightmare. 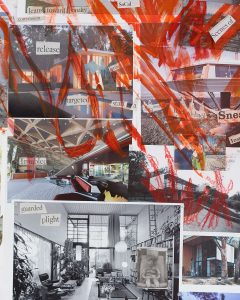 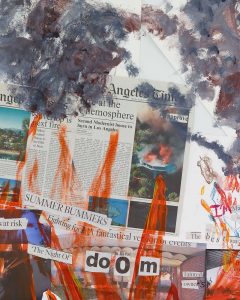 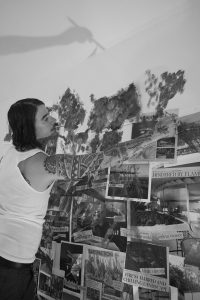