The preeminent photographer combines car iconography with images from his fashion archive.

When I ask my four-year-old cousin what he loves, his response is knee jerk. Eyes bugging and mouth wet with exuberance he says, ‘‘I love race cars!”

“Of course you do,” I think to myself.

While I wish his affinities were a little less conformist, a little more 21st century, I get it—I too had a brief race car phase when I was four. For some, this phase never melts away. Instead, it hardens into a chromium and candy-painted obsession that survives a lifetime. Such was the case with preeminent fashion photographer Craig McDean.

McDean grew up cruising with his dad in a Ford, watching chase films, and even worked as a mechanic before moving behind the camera. In 1999, he made his publishing debut with a stunning homage to American drag racing. The title was less of a confession, more of a reference to that universal boyhood obsession: I Love Fast Cars. McDean nearly took the words out of my cousin’s mouth.

While departing from his typical subject matter, McDean used his same seductive and glowing photographic grammar to explore the people, culture, and especially, the hot rods that constitute drag car racing. Now 20 years later, McDean has followed-up with Manual, combining his life-long passion for cars with past (and unreleased) fashion photography from his archive.

That McDean doesn’t just love cars but loves fast cars is important. High-speed muscle cars, like McDean’s kinetically alluring fashion photography, proffers fantasies of grace—what it would feel like to move streamlined and without effort, to live from a place of pure unthwarted embodiment. In this way, McDean’s work recovers the sentiment and sensation of childhood. Before thoughts, reflexivity, and hesitation levied their inertia, we were kids once, skirting past all things static and heavy.

Manual, though, is not just an appeal to the nostalgic or the car-connoisseur gaze. It is a study of form and pattern. In diptych spreads, femme-fashion is juxtaposed with macho muscle car iconography. McDean moves beyond the gendered nature of his images and finds links according to elements of geometry, mood, and color. Through these relationships, dualities between the human and the vehicular start to mist away. We become vaporous and free like the fumes of an escaping drag car; we re-enter the world with horsepower and lightspeed grace.

As a bonus, Ben Gorham of Byredo has partnered with McDean to make 400 limited Manual covers. Byredo will also release a collection of muscle car memorabilia (baseball caps, beer coolers, scarves, jackets, t-shirts) inspired by the book. McDean and Gorham will appear this Friday, September 27th, 6pm, for a cocktail and book signing at Byredo, Rue Saint Honoré in Paris. 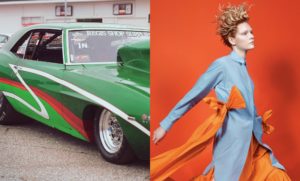