Before #telegramgate, the Rossellós were set to become Puerto Rico's Kennedy clan.

I knew something was wrong—but then again, when was it okay?—on January 11 of this year. The night before, Bad Bunny and Residente had made their famous surprise visit to La Fortaleza, the Santa Catalina residence of Puerto Rico’s then-Governor Ricardo Rosselló, to talk about crime, education, and financial mismanagement. Images on the artists’ Instagram accounts revealed piles of folders and (probably unread) newspapers; stacked haphazardly amid a crooked desk lamp, an overflowing trash can, a bottle of hand sanitizer, and an autographed soccer ball. And what about Ricky? When Bad Bunny and Residente found the governor, he was dressed as if he had just finished playing basketball.

Chaos is an essential part of the creative process, but Ricky was not an artist on a deadline, he was a politician charged with leading an island in crisis. The images we saw of him on January 11, as well as those that emerged in the ensuing weeks, revealed a man who was losing more marbles by the minute. By Friday, July 19, the governor was on the cover of Metro newspaper wearing an oversized and extremely wrinkled shirt, his belt at an awkward slant—a far cry from his formerly impeccable public image, as well as that of his father, Pedro Rosselló, a former pediatric surgeon who had also been governor of Puerto Rico.

When Pedro ran for office in 1992, he seduced the Puerto Rican people with a series of virile publicity exploits. Television ads showed the elder Rosselló jogging around his neighborhood in short shorts, wiggling his taut thighs like a retired Olympic athlete. Ricky’s own appearance—perfect skin, Colgate smile, and mischievous green eyes inherited from his mother—proved a flawless casing for his campaign promises, chief among them Puerto Rico statehood. Rosselló was named the island’s 12th governor in 2016 after receiving 41% of the vote.

The morning Telegramgate broke on July 8, revealing leaked screenshots of a group chat Rosselló was part of, I was paying my for my breakfast at a Santurce restaurant. As I was heading out, the waitresses were glued to the television, one of them commenting, “I can’t believe it, look at him… how could he do something like that?” Studies have shown that attractive people are more likely to be successful and many world-leaders are chosen for their looks. We project our physical desires and beauty standards onto elected officials, as we do with partners, friends, and co-workers. Some posit that Richard Nixon lost the 1960 presidential race to John F. Kennedy because Nixon had appeared on the debate stage with facial hair. And Puerto Rican men are famously gorgeous, from the grandfather in his crisp, white guayabera and the handsome dad in a polo shirt and jeans, to the reggatoneros and traperos and the new generation of gender-bending rebels. They all have their something.

“Ricky is handsome, but with that face you can get away with murder,” I said to the waitresses at Santurce that morning. They looked at each other before one answered, “Ay, Dios mío, you’re right.” The Rosselló family—their chubby boy having flourished into a symbol of Puerto Rico’s supposedly clean-cut future—was on its way to becoming Puerto Rico’s Kennedy clan before that dream came crashing down. On the evening of July 24, wearing a sharp suit and azure tie, Ricky appeared on television to announce his resignation.

His office was tidy. 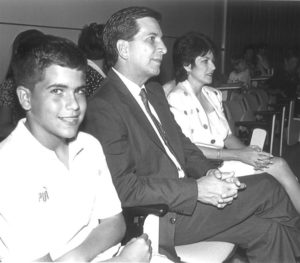