Throughout his 40-year career, Garry Winogrand documented the absurdity, carnality, and poigniance of mid-century American life with a wit and incisive eye passed down to contemporary street photographers like Daniel Arnold. But long absent from Winogrand’s legacy has been his color photography, a segment of Winogrand’s oeuvre often sidelined or entirely excluded from exhibitions of his work.

Garry Winogrand: Color, now on view at The Brooklyn Museum, is the first retrospective devoted entirely to the photographer’s color work.The immersive exhibition, comprised of 400 unexhibited or rarely seen images, provides an unfamiliar entry into Winogrand’s extensive canon. The photographs range from snapshots of Coney Island summers to Texas state fairs, infused, as always, with his signature attunement to the poetics of serendipity.

Winogrand’s former student, Mitch Epstein, wrote about Winogrand’s influence in an essay accompanying an exclusive portfolio of his mentor’s work for Document S/S 2019. Following the opening of the Brooklyn Museum exhibition, Epstein spoke further with Document about the experience of finally viewing this hidden pocket of Winogrand’s career. In recollections of rubbernecking on the highway to brutally silent critiques on a carousel projector, Epstein illuminates Winogrand’s tireless practice of deeply felt imagemaking.

Clara Malley—I wanted to start off with the complicated relationship between color film and art photography. You touched on it in the introduction you wrote: that color was a medium that Garry Winogrand and his contemporaries associated more with advertising.

Mitch Epstein—While there was a history of color art photography extending back to the early twentieth century, it wasn’t so visible in the early ’70s. I came to color as a student of Winogrand, but it was not through his color pictures, which were essentially unseen. He told us that he had used color for some of the advertising and editorial work he had done, but never spoke about making his own color pictures. Garry made a sharp cut between the period when he was doing commissioned commercial work in the ’50s and 60s, and what followed in the 70s, when he taught photography and devoted himself to his art. I think he had some reticence [to shoot color] because color was bastardized by its exploitation in advertising, or at least that was the perception of it in his circle.  There were also technical challenges to shooting color transparencies, and it was a significant expense to make satisfying prints

Clara—In the introduction, you mention Winogrand didn’t want his students to treat color like a trick pony. How did he bring those sensibilities to his teaching? 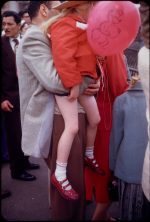 Mitch—As a teacher, Garry had little interest in pictures that were just about their color. On the contrary, he was interested in how color was intrinsic to a picture in complex ways. As he described it, form and content in photography are already inextricably linked, and he perceived color as another inextricable fundamental—like content and form, not as an extra element laid on top of them. This complicated my understanding of how color functions in a picture.

When the class began shooting color transparencies, we would darken the classroom and project our edited assignments in a carousel projector. While the student work was mostly banal, Winogrand’s interest was piqued by simply how compelling the world looked photographed in color. Also, a well-exposed transparency projected on the wall looked like finished work, unlike the many poorly crafted black and white prints students pinned to the wall.

Garry had little patience for the reductive comments and obvious questions—‘is this a good picture?’ [Laughs] He taught profoundly though his silences, and refused to spoon-feed students a response to their work. Garry wanted you to do the work of looking—to digest what you were seeing and make some sense of it. That was painfully uncomfortable to all of us, yet led to a disorientation that was effective.

Clara—Do any instances of watching him at work stand out in your mind?

Mitch—I remember being in the middle of a conversation with him on Fifth Avenue and another time in a café in Austin, Texas, and while one eye was focused on me, the other would be roaming our periphery. Garry woke up in the morning, went out, and took pictures and then more pictures.  Nothing got in the way of that.

He loved to be driven because then he would be free to photograph out the passenger window.  He would direct me to ‘rubberneck, slow down!’ so that he could take in the passing landscape and shoot.

He could be unabashedly aggressive if that’s what it took to make the pictures he was interested in making. Yet he could be very graceful and humorous. I was awed by his athletic prowess and powerful instincts. He knew intuitively where to stand so that he might craft order from the chaos of life.

What’s hard for some people to understand is that he didn’t preconceive the pictures he was making. He arrived at them through his method of looking, framing, shooting, and being in synch with the world at large as it revealed itself to him. Sometimes it might have been the first frame of a scene that later interested him, but it just as well could have been the last or one from the middle. There was no formula.

It was exhilarating to watch him work on the streets of New York; akin to watching a quarterback under pressure to throw the ball or run with it. I learned a lot from watching him take advantage of the unforeseen opportunities that present themselves under the pressure of limited time. Winogrand had a willingness to take risks and a master’s understanding that failure would lead to breakthroughs.

Clara—His color photography isn’t as widely known or as widely seen. Do you think that the imprint he leaves behind in his color work is different from his black and white?

Mitch—That’s what’s so exciting about his show at the Brooklyn Museum. Winogrand’s color work is a formerly hidden historical chapter. He never exhibited or published the color work in his lifetime.

Clara—‘A hidden chapter’ is an interesting way of framing it. How do you think the rediscovery of this chapter will change how people perceive Winogrand?

Mitch—What’s compelling to me about Winogrand’s color work is that we get to see him experimenting with the possibilities of a new medium. While his photographic approach is similar to his black and white work, the results are palpably different. There is an emotive character to his color work that distinguishes it from his black and white pictures.

The curator Drew Sawyer’s brilliantly conceived installation radicalizes the work, while also honoring its original and sole existence as transparencies. I think that Winogrand would have appreciated the exhibition for its honesty and imagination.

One of the things that matters about Winogrand’s work now is that we’re living in an age that, photographically speaking, is profoundly narcissistic. Most everybody’s pointing a smartphone camera, like a mirror, back towards themselves. Winogrand was about looking out, looking beyond. The work was not a mirror reflecting the artist, not even metaphorically. Even though his photographs are completely distinctive, they’re refreshingly selfless. It’s moving and meaningful to revisit the work of a formidable artist that we are still learning from. That’s a beautiful thing. 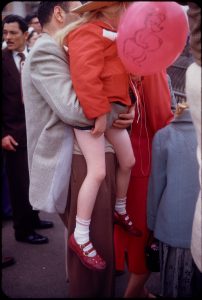 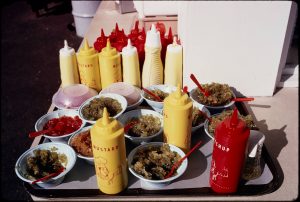 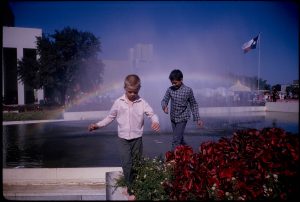