For his first solo museum exhibition in France at Palais de Tokyo, Theaster Gates explores America’s dark forgotten past through the interracial exile of Malaga Island.

“Nothing is pure in the end… A sea of wood, An island of debate. Can an exhibition start to shift the negative truths of the history of a place?”

Theaster Gates has exemplified the meaning of social practice in his work, creating new models for building community while bringing awareness to both the historical and present-day struggles of black America. In Amalgam, his first solo museum exhibition in France at the Palais de Tokyo in Paris, the Chicago-based artist shed light on Malaga Island, a 41-acre island located at the mouth of the New Meadows River in Casco Bay, Maine. The island was a fishing hamlet, home to an interracial community born out of the Civil War until 1912, when the Maine governor Frederick Plaisted forced its poorest population, a group of about 45 mixed-race individuals, off the island. Some relocated in Maine, while others were involuntarily committed to psychiatric institutions. Ashamed to be associated with the island and the stigma that came with being from there, many of its descendants feared speaking about the incident, which stemmed from racism and classism. 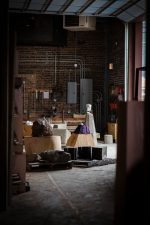 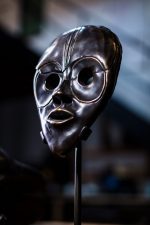 All images: View of installation at the studio. Courtesy Theaster Gates. Photographed by Chris Strong

Amalgam, which is on view through May 12, opens with “Altar,” a sculpture made with slate, a medium used in Paris buildings and in places of worship, that emulates the three-person dwellings where the Malaga Island’s inhabitants resided and which were destroyed upon their exile. “‘Altar’ is a graveyard of crushed love in an era when white men so fearful in their dire social complexes lynched, burned, and castrated so many black men,” said Gates in his artist statement. In the next room, the words “In the end, nothing is pure” are illuminated in green neon lights, a response to the supposed racial purity that would be achieved from the act of eugenics that occurred in 1912. At the back of the installation, an illustration of a white woman kissing a black man is displayed on an easel as a tribute to Malaga Island’s interracial population. Nearby, a rough timeline drawn in chalk states that 1641 was the year the first documented African American arrived in Maine. “Famous mixed race people and blacks who can pass for mixed” is written below it, with the names Alicia Keys, Hallie [SIC] Berry, Jesse Williams, and Kaepernick listed nearby. The Black Monks, the music group often intertwined with Gates’s practice, provide the soulful, yet haunting soundtrack. A forest of wood columns from ash trees serve as the exhibition’s finale, some topped by casts of African wood masks, giving viewers an opportunity to contemplate the horrific event, and the resilience of the people who suffered from it, giving a tangible sense of history to one that was erased with the hope that it would be forgotten. “These trees were dying, a miller said they were not fit for timber. Useless. Somewhere in the death of a tree is the truth of its strength,” said Gates in the accompanying wall text.

Gates’s exhibition revives the dark memories of a part of American history that is seldom discussed, giving it new exposure, serving as a lesson on how we can learn from mistakes of the past. 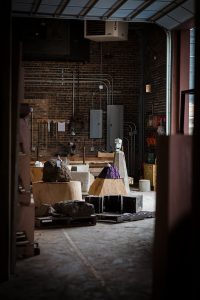 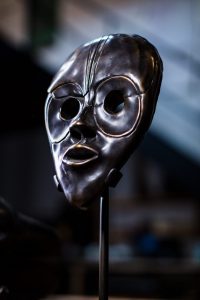