Bert Marcus talks to Document about the impact of social media on modern-day fame, and his upcoming film Apollo.

Why are Paris Hilton and The Fat Jewish famous? Bert Marcus’s films explore the nuances of modern-day fame and the impact of culture in society. As the director of The American Meme, the Netflix documentary about the rise of social media influencers—Marcus took a deep dive into the contemporary phenomenon. His newest documentary Apollo debuts this spring and takes a look at the influence of Harlem’s legendary Apollo Theater on pop culture. The documentarian tells Document why he decided to profile New York’s Apollo Theater, why he’s keeping quiet about the secrets he uncovered, and what directing The American Meme taught him about the perils of social media.

Caroline Christie—What is your new documentary Apollo about?

Bert Marcus—It’s an encapsulation of the impact of the Apollo Theater in New York, not just music and comedy and all those elements, but its impact on society. The things that have come out of that theatre are pretty historical and so has its impact on this country.

We’re going to open the Tribeca Film Festival, we were selected as the opening film for the entire festival, which is a huge honor and aligns perfectly with the Apollo being in New York, and what it represents. It has such a rich history that a lot of people think they know, but they don’t. You know, a lot of things that people may have thought they knew, but in reality, did not. So we’re thrilled to bring it to them. And HBO has picked up the rights and will be distributing the film later in the year, which we’re thrilled about, and couldn’t find a better home for a project like that.

Caroline—What sort of hidden secrets about the Apollo will the film feature?

Bert—I’d rather not give it away and have people enjoyed the film, but let’s just say when I started this project I thought I had a pretty strong music background, and music is a major passion of mine, as is comedy, and a lot of the great things that came to the Apollo. And I thought I knew the story of the Apollo because I’ve always been a fan. I’ve been to shows there, and I was shocked during the process of making this film how much I learned about its impact, not just on entertainment, but society in general.

Caroline—Why did you choose to focus on a historical building?

Bert—When you find a historic place that’s been around for so many decades, and has had people come through it that have completely changed the world, it’s a fascinating start. It represents so much more.

Caroline—The American Meme had some great famous faces in it. Who have you got in Apollo?

Bert—There’s a wide gamut of people, but everybody from Jamie Foxx to Aretha Franklin and then many, many more. It’s a star-studded line up of past and present because the impact that the Apollo had on these individuals, New York, and even this country is pretty remarkable.

Caroline—In both films you’ve got quite a few celebrities, how did you gain their trust and get them on board?

Bert—I have a track record of documentaries that I think, hopefully speak for themselves. A lot of them had responded and been fans of my previous work. I had also worked with a few of them, and known a few of them socially.

It was about establishing trust on both sides and for them to understand that as a director, I wasn’t approaching The American Meme with preconceived notions, or with any sort of biased feelings about them.

Paris Hilton on the set of The American Meme. © Bert Marcus Productions, LLC.

Caroline—The American Meme was about social media influencers and really tried to unpick the notions of contemporary fame. How do you think social media has impacted fame and celebrity?

Bert—Fame used to be something that was really difficult; it used to be very difficult to attain. On one hand, social media has provided and democratized a relatively low barrier to entry that allows people to kind of enter this seemingly self Manifest Destiny, where they’re able to have this experience and exposure and connectivity to a massive audience and an unprecedented amount of money at their disposal. But I think there is a real price to pay for that. The pursuit of fame, through social media, is a double-edged sword. It’s the new American Dream, but it’s riddled with conflict. One of the reasons I really wanted to make that movie is I’ve noticed that— especially this younger generation—people are very difficult, harsh, and judgmental of themselves. And what we wanted to do was show people not be so difficult on themselves.

Caroline—Do you think social media platforms are responsible for that?

Caroline—Is there anything about The American Meme that you would do differently now?

Bert—I don’t think so. Social media has uniquely enabled us to live out Andy Warhol’s prediction that in the future everyone will be world-famous for 15 minutes. Technology seeded this behemoth—the social media giants of today like Instagram, Facebook, YouTube, and Snapchat—it’s changed our perception of what it means to be famous, and how we define our self-worth seems to have drastically shifted. Fame used to be inextricably tied to talent, but in our modern world, something as simple as a smartphone can be the key to recognition. We all play a part. As we walk down the street, our phones glued to our hand, this obsession has attached a significant to social media that now permeates our everyday lives and self-images of everyone. So I thought this was an important time to make a film like this to really start one of the most important conversations today. 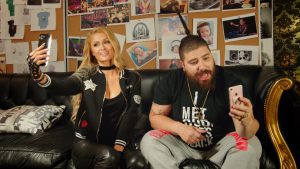 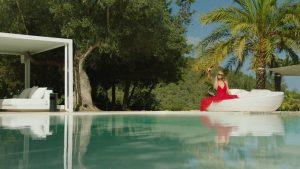