Mike Kelley's 'Unisex Love Nest,' which was recently shown in his adopted town for the first time, still resonates 20 years after its debut.

“I didn’t feel connected in any way to my family, to my country, or to reality for that matter: the world seemed to me a media facade, and all history a fiction—a pack of lies. I was experiencing, I think, what has come to be known as the postmodern condition, a form of  alienation quite different from postwar existentialism because it lacks any historical sense—there is no notion of a truth that has been lost.”
—Mike Kelley in his 1999 paper “Cross Gender / Cross Genre”

In 1999 Mike Kelley—the Michigan-born, Los Angeles-based artist who committed suicide in 2012— presented the paper “Cross Gender / Cross Genre” in Graz, Austria, as part of the Steirischer Herbst festival. Titled, “Re-Make/Re-Model: Secret Histories of Art, Pop, Life and the Avant-garde,” the festival’s theme was centered around the politics of queer aesthetics. To accompany the paper, the artist presented a video installation, titled Unisex Love Nest, at the Palais Attems in Graz. The film included clips of cross-gender-related films and documentation, and interviews with some of the artists, set against the backdrop of an idealized children’s bedroom.

Kelley channeled his own rebellion in the installation, which has been shown primarily in Europe, where it was last viewed at the Sammlung Goetz in Munich in 2009. After a decade of being in a private collection, Hauser & Wirth showed the work in Kelley’s adopted hometown during the inaugural edition of Frieze Los Angeles from February 15 to February 17, where it sold for $1.8 million. Kelley’s misfit aesthetic may have attracted the eyes of a new consumer last fall, due to a collaboration with Supreme, and the sale shows that his market is still strong in the art world.

“They’re only young once, so take this opportunity to give them a room they’ll remember forever,” reads an ad from a 1999 issue of the magazine First for Women. The ad caught Kelley’s eye, and became the starting point for “Unisex Love Nest,” where he captured the innocence of the early years of childhood, and the idealized cheerfulness with which parents wish to shield their kids, by sticking bright floral decals to the walls, accenting the room with cheerful yellow pillows and a wooden rocking horse with a yellow stuffed duck toy sitting on it. A television stands in front of the bed, displaying Kelley’s film, a dark contrast that depicts a creative reality that happens beyond childhood.

“The set is a little girl’s room that comes from a women’s magazine, and Mike uses that as a kind of adolescent idea of a very static idea gender, and it’s got that video in the middle of it that is really talking about those kinds of polarities, and I think that’s reflective of his practice, which was very fluid, really moving between genres, and taking ideas of performing personas,” said Mary Clare Stevens, the executive director of the Mike Kelley Foundation for the Arts. 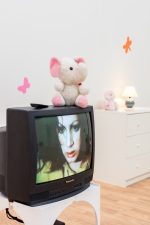 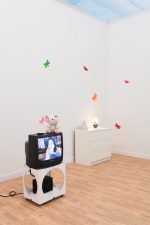 Kelley, although straight, connects his own feelings of alienation and angst to that felt within the gay community.

“It really looks at the history, it’s personal, it’s bioagraphical. Mike openly talks about his influences in the ‘60s, when he came up, and his generation of artists, and it tracks a history of cross dressing—this is all from Mike’s point of view—and the musical counterpart to that. He ties them together, so he goes from looking at the psychadelic hippie counterculture in the ‘60s, to a sort of a shift in the ‘70s, to glam rock, and then eventually to punk rock, and he also talks about a very specific history of the use of cross dressing as a transgressive performative action, so he talks about very infamous or famous groups, like the Cockettes, who were a group of male and some female performers in the mid to late ‘60s in San Francisco who crossed dressed,” explained Stevens.

In the paper, and the accompanying film, Kelley dissects the roles and origins of camp,

“the other,” homosexuality, and cross dressing, touching upon cultural icons like John Waters, who he credited with “‘celebrating queerness’ for its abject nature relative to dominant American society,” and comments on Mick Jagger’s stage movements being “‘black’ and ‘gay,’ which made him twice evil—and doubly sexualized—in the eyes of his teenybopper fans.”

“The piece is very important because it’s discussing these issues in a sort of fluidity in terms of identity, and I think Mike is tying that to himself and his own artistic practice,” said Stevens. 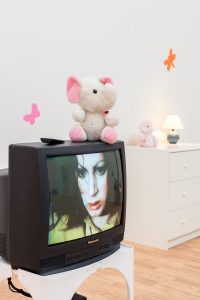 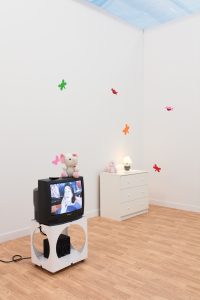