On the ground floor of a Chelsea townhouse, a mannequin sits on a bed in a mirrored room with a chandelier overhead. A copy of Fat magazine rests on the bedside table, and down below, a cluster of empty alcohol bottles are scattered across the reflective floor. A rack filled with hanging lingerie stands on the other side of the room. It’s not the home of a wealthy dilettante, but the main exhibition space for London gallery Timothy Taylor’s New York location, and the mirrored room is actually a film set from Scene VI of artist Josephine Meckseper’s film, PELLEA[S].

On November 9, 2016—the day after Donald Trump had a surprise victory over Hillary Clinton in the presidential election—Meckseper immediately knew that she wanted to set her next film during the Trump inauguration and the protests around it. The German-born, New York-based artist is no stranger to weaving tumultuous current events with an artistic performance; she’s also done so with the Rodney King riots and the protests that surrounded George W. Bush’s Iraq invasion in 2003. “I’ve been working with this form of neorealism through my entire career, where you use an actual backdrop of something that’s happening in reality and you create a work within that,” said Meckseper.

Meckseper took the idea for PELLEA[S] from Maurice Maeterlinck’s 1902 play Pelléas et Mélisande. The play was later turned into an opera by Claude Debussy, which, coincidentally, is running at the The Met Opera during part of the duration of the Timothy Taylor installation. The black and white film opens with the date January 20, 2017—Trump’s inauguration day—on the screen, and ominous music playing in the background. The first shots of the majestic Washington Monument, which is seen from several vantage points throughout the film, lead into a parade of military men in trench coats marching in unison. The curved brutalist grid of the Hirshhorn Museum’s facade also plays a prominent role in the film, providing a contrast to the shots of Washington, DC’s neo-classical buildings. “The architecture itself plays a role in the film,” said Meckseper.

The set at Timothy Taylor emerges in Scene VI as G’s bedroom, where the narrator confesses, “I’m not happy in this space.” Images of protest from the Women’s March the day after the inauguration appear in the middle of the film, leading into a scene where G looks into a mirror. “She looked ahead at her formed reflection as fragments of mirrored glass shattered and collapsed around her,” says the narrator, perhaps alluding to the chaos of Trump’s presidency.

Meckseper condensed Maeterlinck’s play into 11 scenes. The protagonist is involved in a love triangle with two women, M and G, named after the characters Mélisande and Golaud is the original . “Each scene in the film has the actors playing out the original play in a readapted more contemporary form that reacts with the political reality of what’s happening, and there’s a narrative that ties everything together that explains the reality versus the internal dialogue,” said Meckseper.

The artist sifted through various films, creating a movie that evokes film noir as well as Dadaist and Surrealist cinema, resulting in a chilling dystopian narrative of present-day America. For the set, she referenced the boudoir feeling of Rainer Werner Fassbinder’s The Bitter Tears of Petra von Kant, which has a place in Meckseper’s memories, since it was filmed next to her childhood home in Germany during the 1970s. The sets and spatial dimensions of Alain Resnais’s Last Year at Marienbad also informed the set.

Meckseper said she directed the film not to make a political statement, but rather with the intention of “creating something and putting something out in the world that has an autonomous voice, that’s not necessarily just reacting to what is happening, but that puts another voice out there in the world that has a different perspective than what is happening, that is not chiming into the general.”

Josephine Meckseper’s Scene VI is on view at Timothy Taylor NY through February 23; PELLEA[S] will be screened at The Kitchen on January 29 at 6:30pm. 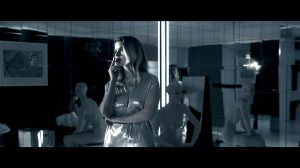