Raúl de Nieves's ‘When I Look Into Your Eyes I See the Sun’ is on view at the Faena Hotel South Beach through the end of the year.

A whimsical carousel—encrusted with a coating of colorful, shiny beads—sits at the entrance of the Faena Hotel Miami Beach. This kinetic sculpture by New York-based artist Raúl de Nieves and titled When I Look Into Your Eyes I See the Sun, is presented by Bulgari in collaboration with Art Production Fund, moves round and round, evoking childhood memories and the idea of fantasy. De Nieves made waves at the 2017 Whitney Biennial with sculptures coated in beads that sat in front of stained glass windows, and at 2015 exhibition Greater New York at MoMA PS1. Document met with De Nieves in front of the carousel, which was feted by Bulgari and Art Production Fund at a cocktail and dinner attended by Laura Harrier, Chloe Sevigny, Jess Glynne, Winnie Harlow, and Candice Swanepoel. Document spoke to De Nieves about the public artwork—which is on view at the Faena through the end of the year, the concept behind it, and his upcoming exhibition at the Cleveland Museum of Art.

Ann—Tell me about the whole concept. Why did you decide to create a carousel?

Raúl—I decided to make a carousel because it’s such an easy object to relate to. It transcends through the idea of ages and it relates to everyone. It also allows you to create a narrative within its pieces.

Ann—What’s your personal connection to the carousel? Does it remind you of your childhood?

Raúl—I think the personal symbolism of the carousel, it really reminds me of childhood and fantasy, and making one with this experience really allowed me to hone on narratives that sometimes maybe we forget about, like this idea of becoming an adult, growing older, aspirations, fears, things that hold us back, things that push us forward, and obviously the idea of a journey as well. Obviously a collaboration between Art Production Fund and Bulgari.

Ann—Yeah, how did you get the commission?

Raúl—I had applied for the piece to be selected, so it was kind of random. It was a proposal situation where you propose this idea.

Ann—Did you have to propose to Art Production Fund, or Bulgari?

Raúl—Bulgari. Art Production Fund helps with the beginning of the piece, so I proposed with this carousel and they totally fell in love with it. It’s really amazing because they gave me the freedom to actually execute it and let me do my own thing, which is really rare within these collaborations.

Ann—What’s the story behind this carousel?

Raúl—I think it’s the idea of metamorphosis and the shifting of age. There’s like this mother who is aware of her existence, and she brings on all these characters that are part of the situation that’s happening, and fear is something that we like sometimes get rooted to, and I wanted to think about what this nostalgia entails into.

Ann—What is this serpent about?

Raúl—The serpent is this connection of wanting to regroup itself. I was even thinking about our political climate and how it’s creating so many different—it’s trying to seperate everything, and then again, we’re trying to really unify ourselves, so the serpent also is this idea of the defeat of the fear and the longing to actually understand what that means.

Raúl—So the chains around the figurative, that’s kind of like the things that hold us down. The things that hold you from growing, or hold you to you sense of who you are. I mean I wanted to portray these people as almost in captivation, and maybe like the narrative should be open ended, whether they want to escape, or they actually want to be a part of it. 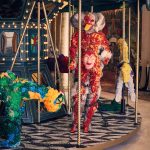 Ann—Tell me about the materials you used. Did you use Bulgari materials?

Raúl—No, this is all plastic beads.

Ann—From a craft shop? They look more precious than that.

Raúl—Yeah, well I think that idea of accumulation gives you that sense of something precious. But it is literally just plastic beads. So this style of work is my practice. I do this usually in a sculptural format, so it is something that is very well known of who I am as an artist. Using these vulnerable materials to transform everyday objects.

Ann—what they do. Tell me about the process of making the whole thing. When did you start?

Raúl—We had to allocate this carousel, which was in need of help, so we teamed up with a design group called Square Design, and then I allocated six assistants to help me do the beadwork. So at the end of the day, it is a collaborative effort. I think this is a grand scale. It’s something larger than life. It’s a big collaboration between myself and other artists and artisanal people, so it’s something that really went beyond than what I expected.

Ann—What are you working on next?

Raúl—I have a solo show at Cleveland Museum of Art in February, so that’s my next project.

Ann—What will that consist of?

Raúl—I make these wearable suits that also become sculptural elements. The show is kind of an homage to my mother. The title of the show is Fina, which is her name. It’s my first museum solo show, so I thought I would really celebrate the person who has made me who I am. 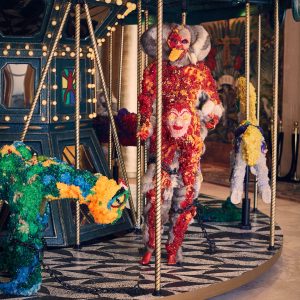