The Detours section at Shanghai's Art021 examines the consequences of globalization and the return to regionalism in the Pacific Rim through the stories of its people.

The Pacific Rim—the countries that surround the Pacific Ocean—has been long used as a military and economic term that encompasses a vast history of trade and migration. The region was also the starting point for Detour: Lived Worlds, a special section of Art021, a contemporary art fair in Shanghai. Curated by Cesar Garcia of The Mistake Room in Los Angeles, Detour features six galleries—Bank (Shanghai), Catriona Jeffries (Vancouver), Ghebaly Gallery (Los Angeles), Joségarcia, MX (Mexico City), Páramo (Guadalajara), and Shulamit Nazarian (Los Angeles)—from the Pacific Rim, addressing the rise of globalization, its consequences, and the return to regionalism, as well as the “formless connectedness between people,” a phrase coined by writer, theorist, teacher, and curator Irit Rogoff.

“We wanted to balance both a very long history that leads back to the Galleon trades between the ports of Manila and Acapulco, when the Philippines and Mexico were both seats of the Spanish crown to a more sort of contemporary and urgent geography that’s defined by capital interconnectedness and ideas around commerce,” said Garcia.

The curator and his team looked a lot into the scholarship that was written in the ‘80s and ‘90s on the Pacific Rim, compared it to the more recent scholarly texts on the region at present, and then approached the artists about the opportunity, and after, their galleries. Rogoff’s idea of the exhausted geography—”When the definition of a place starts meaning something different than its reality,” complained Garcia, who found the idea interesting.

The works in the section are as varied as the regions which they represent, shown in six snapshots. At Páramo,  Peruvian-American artist Eamon Ore-Giron collaborated with tapestry workers in Guadalajara to create a mashup of Peruvian-Incan iconography, Russian painting, and Latin-American concrete painting—forming vivid geometric abstractions. Tuan Andrew Nguyen, a Vietnamese-American artist who left Vietnam in the ‘70s, took the refugee blankets given by NGO workers to those out at sea to create imagined cartographies that represent their homes. Just by it, Shulamit Nazarian presented the work of Fay Ray, who linked together biographical symbols from her heritage; her grandparents were migrant workers, so corn was one of the symbols that formed staid, monochromatic silver sculptures. Sayre Gomez created trompe l’oeils to evoke stickers stuck on objects at Ghebaly Gallery; one was of Mickey Mouse as Uncle Sam on mirrored automobile paint. Catriona Jeffries showed dozens of Air Jordans, mutilated and sculpted in groups to form animal masks by first nation and Swiss artist Brian Jungen. At Bank, Jin Shan drew the connection between the past and present-day technology through a work that combined classic sculpture with wire and cubes that are supposed to represent pixels. Nina Beier stuffed fabrics with animal prints culled from these places and stuffed them into frames at Joségarcia ,mx.

Did those mythologizing promises and ideas come true? “I don’t think so,” said Garcia, who said that Detours examines, “What it means to have an embodied regionalism—what it means to use the local as an entry point to understand the broader dynamics that are clearly failing.” 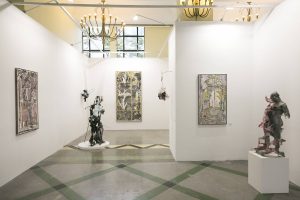 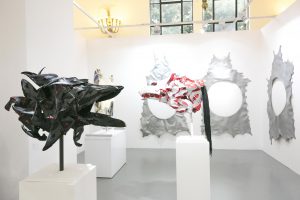 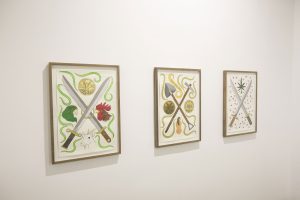 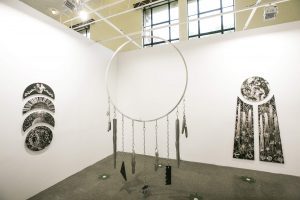