Balenciaga creative director Demna Gvasalia is notorious for keeping the ongoings of the  backstage activity before his shows private, away from the lenses of prying photographers until last spring, when he allowed photographers Johnny Dufort and Pierre Ange Carlotti to document entire process, from castings at Balenciaga headquarters, to a look at the graffiti-covered slopes after the models walked through it during the show.

After the photos were taken, Gvasalia worked with publisher Rizzoli to edit the selction down to about 300 behind-the-scenes photographs that were turned into a 304-page book simply titled Balenciaga: Winter 2018. The documentation by Dufort and Carlotti, who shot the project in tandem, provide unparalleled access into the world of Gvasalia’s Balenciaga, with a particular focus on the Fall/Winter 2018 show that took place on March 4, 2018.

“With this show in particular, even backstage looked like a story,” said Gvasalia in a statement. “I realized that every show I do from now on for Balenciaga is cinematographic in terms of concept and setup, and each of them I’d like to accompany with some memorabilia, something that actually puts you into that show and the process behind it.”

Like the slopes that were the show’s backdrop, the book’s cover is filled with a vibrant mess of graffiti. The first spread opens with a close-up of two very important aspects of the Balenciaga Fall/Winter 2018 collection: the phrase “SAVING LIVES, CHANGING LIVES,” which appeared on knitwear in the collection and served as an ode to the label’s charitable collaboration with the World Food Programme, and two intersecting rainbow flags above the Baleniaga logo in celebration of the LGBTQ community and Gvasalia’s own sexual orientation. It then goes into every step of the process, from detail shots of the show’s acessories—ornate dangling earrings adorned with skateboard wheels or blue gems, multicolored fannypacks, and leather belts with acetate buckles— to portraits of the models in their full looks.

Balenciaga: Winter 2018 is a beautiful portrait and intimate up-close look at the complex layers that go into executing a fashion show from start to finish—through the lenses of Dufort and Carlotti, with Gvasalia’s artistic direction. 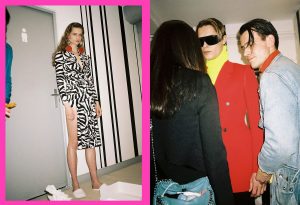 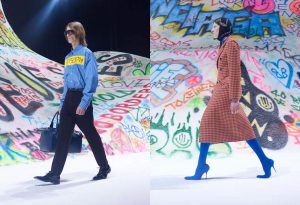 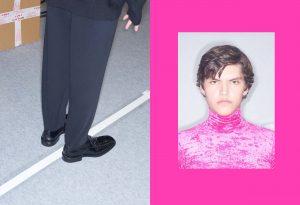 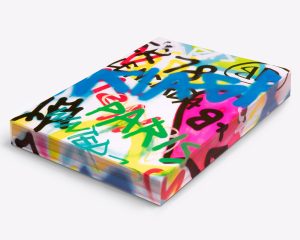