The German heritage footwear brand unveiled a number of fresh styles during its Italian menswear show.

In 1964 Karl Birkenstock created the first prototype of what would eventually become the iconic Birkenstock sandal, eventually being known as the Madrid. The sandals were a hit with soldiers after World War II for its orthopedic support. After an American named Margot Fraser first wore the comfortable sandals at a spa in Germany, she discovered they alleviated her foot pain and decided to bring them to the United States, where they became a hit with the flower children of the 1960s.

“The shape of the shoes, because usually every shoe is kind of pointed, but your feet, when you are born as a child, they are never pointed,” explained Birkenstock CMO Yvonne Piu this week at Pitto Uomo. She noted that Birkenstocks are actually shaped like a foot. “That helps that you’re not squeezing your feet. We squeeze our feet very early, and then our feet become like this, and ladies especially, we tend to develop hallux valgus (bunions). That leads to problems, and then you cannot walk properly anymore, and then you can’t do sports.”

While Birkenstock’s heritage is firmly footed in orthopedics, the German footwear brand proved during Pitti Uomo that it’s more than just orthopedic sandals; since Birkenstock first created the sandal it has grown into a lifestyle brand with beds, a line of footcare products, and sandals and shoes that are fresh and more about fashion that just happens to help your body function the way nature intended.

The brand presented its latest offerings this week with a Florentine picnic in the beautiful 16th-century Torrigiani Gardens in Florence. The fresh looks had Birkenstocks’s DNA deeply embedded in them and ranged from sleek and minimal to sporty and cool, across the spectrum of sandals to shoes. The colorful sport tech series boasted vibrant slides with the Birkenstock logo embossed on the band that goes across the top of the foot, while another featured two leather straps that criss-crossed over the foot. The Madrid was reimagined with an ankle strap, and a new all-black minimal version of the Arizona—the original two-strapped Birkenstock sandal was adorned with a simple, more refined silver buckle. The brand has already collaborated with Colette, 10 Corso Como, Kirna Zabete, Opening Ceremony, and most recently Rick Owens, who put his edgy spin on the Arizona.

Birkenstock is meticulous about creating new designs and the process can take a long time, so they know they’re getting it right. It works at its own pace, rather than with the fashion calendar that sees new collections released two to six times a year. “We try to get the product completely ready to the point where it’s very comfortable,” explained Piu. “We wait until we are absolutely sure that the product is ready for the market, and then we finish it.” 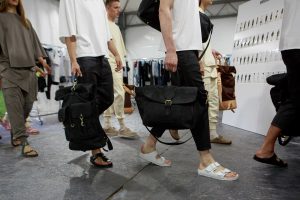