The photographer has sat for George Condo, Michael Dweck, Peter Beard and more, but now, she's decided to become her own subject.

Large-scale Polaroids of the same haunting woman, sometimes layered with stars, or bright colors surrounds the space at Gallery 151 in New York. Almost appearing as if they stemmed from an other-worldly place, the woman in the portraits is Natalie White. The photographs have been taken with the rare to find—only three exist—large-format 20 X 24 Polaroid camera, the same camera kind used by Andy Warhol and Robert Rauschenberg. The photos of White are a part of her latest exhibition, Transmissions From Space, which opened earlier this May. The artist, a former model, turned the camera on herself after posing for the likes of Will Cotton, Chuck Close, Olivier Zahm, Marc Quinn, Anna Bloda, Michael DiDonna, Raphael Mazzucco, Max Snow, Elizabeth Waugh, and most recently, Olaf Breuning. White wouldn’t always get the credit for her part in the images of her likeness, so she decided to show that it wasn’t just the artists, that her role also played a part in making the art. “I wanted to prove to the world and myself that I could make work without anybody else being involved,” said White, whose likeness is in George Condo’s 2014 neo-cubist painting Nude and Forms which recently shattered the artist’s previous records at auction.

Condo’s painting is unlike the majority of the 60-year-old’s previous work. It strays away from the dark, twisted—almost disturbing—undertones that often accompany Condo’s fragmented portraits. His model for the painting, White, helped turn Nude and Forms into a bright, cheery, and playful work that fetched $5.2 million at the Christie’s post-war and contemporary art auction in New York this May.

White first met Condo at The Mark Hotel Bar in 2013. The artist made a beeline for White after he grew bored with his own group. “Can I come sit with you?” asked Condo, who eventually joined White. “I didn’t recognize him at all,” says White. The two started dating soon after, and then White started sitting for him. “I would probably be less open [with a stranger], and George and I had a really great friendship as well as relationship and he really put that into his painting, which is why it’s so colorful and happy looking,” explains White. “He started painting figures with blue eyes because I have blue eyes.”

White first arrived in New York at age 18 from West Virginia. After a decade spent modeling, White soon found herself on the brink of having to return to her home state. Deciding if she had to go that she’d go in style, White planned a night out at Bungalow 8, then one of the city’s most exclusive nightclubs. As luck would have it, an older man wearing no shoes and pajamas approached White and said, “I want you to be my muse.”

“What’s a muse?” White responded, asking for a business card.

The man wrote his name and number on a napkin, replying that he wanted to photographer her. Thinking he was homeless or a vagrant, White shoved the napkin into her purse. “I Googled him the next day, and I found out he was a really important photographer,” said White.

Around this same time, White found herself in between apartments, resorting to sleeping on the subway and showering at the gym. It was then that she met the filmmaker Michael Dweck at a go-see. She didn’t know what it was for until she arrived and learned that it was a nude shoot for French Playboy. “I don’t think I can do that,” White recalls saying. “I’ve never posed naked before for a magazine.”

“Why don’t we do some Polaroids?” suggested Dweck. “We’ll destroy them if you decide not to.”

White obliged, but covered up her face because she didn’t want anybody to know it was her. Dweck placed White’s Polaroids next to those of a naked Kate Moss, and asked her which ones she thought were better. “I was like, ‘Oh my god, holy shit, I guess I do look amazing naked,’” White says, who ultimately agreed to be in the shoot and became the first American model in French Playboy.

Despite sitting for a number of male artists, some of whom have become accused of sexual harassment, White maintains that nobody ever attempted to coerce her into doing anything sexual that made her feel threatened or unprofessional. “I never felt uncomfortable sitting in front of the artist because I knew that if I had a problem, I would just get up and leave,” White says. “I never had a problem because I think I’m such a strong personality. They would be way too intimidated to try to make me feel uncomfortable.”

Instead, White is concentrating on creating more work and preserving the legacy of the Polaroid 20 x 24 camera. As for playing the role of artist’s muse? She chuckles, “I don’t have as much time to do it as I used to.” 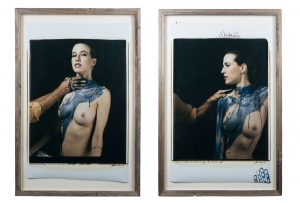 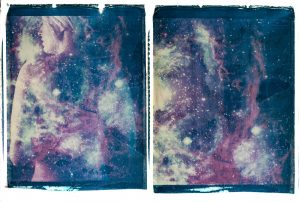