It’s generally agreed that the $21.1 million spent on painter Kerry James Marshall’s Past Times last week was the highest amount of money fetched by a living African-American artist. The grand-epic scale painting by Marshall was one of several contemporary pieces on the block at Sotheby’s last Wednesday. As far as the contemporary canon goes, Marshall was in good company, selling alongside Joan Miro, Willem de Kooning, and Mark Rothko.

But, perhaps more impressively, were expectation defying sales by a quintet of African-American artists up for auction the same night. Pieces by Mark Bradford, Julie Mehretu, Lynette Yiadom-Boakye, Glenn Ligon, and Njideka Akunyili Crosby, on sale to raise money for a David Adjaye-designed Harlem location for The Studio Museum were expected to bring in a respectable $4.7-6.95 million, collectively. But the expectations were pleasantly defied, thanks to Mark Bradford’s Speak, Birdman and Njideka Akunyili Crosby’s Bush Babies, which sold for $6.8 million  and $3.375 million, respectively.

Lynette Yiadom-Boakye, An Assistance of Amber, 2017. Image courtesy of Sotheby’s.

Even more fittingly, the purchases were led by two prominent black art collectors, among other things you might know them for. It was revealed that producer and Ciroc spokesperson P Diddy, or Sean Combs, was responsible for the record-setting purchase of Past Times. While Combs bid through a Sotheby’s assistant, leaving the masses to writhe under the winner’s anonymity for at least two days, his friend and fellow producer, Swizz Beatz was front row to bid on Lynette Yiadom-Boakye’s elegiac An Assistance of Amber. It’s been reported that Beatz, a known art collector, turned Combs onto Marshall’s work several years back. Jack Shainman, the gallerist who has represented Marshall since the early 90s, spoke of the “purpose” of Combs’ own art collection. “I know that this work has found a home in a collection with purpose and an eye toward preserving legacy—that of Sean Combs, and that means a lot,” he said. Other pieces reportedly in Combs’ collection include Tracey Emin, Ai Weiwei, Keith Haring, Andy Warhol and Jean-Michel Basquiat.

Last week’s sales, and the prominence of the buyers involved, reflect a broader recognition that contemporary art by black artists is penetrating the American psyche, and its institutions, in a way that no longer relegates that works to outsider status—the success of Marshall’s three-city retrospective last year being a case in point. In a profile of Marshall from 2016, the New Yorker summed up this long deserved mainstreaming of the black artistic consciousness: “There have been other significant African-American painters in recent years, including Robert Colescott, whose somewhat similar engagement with art history ran to fantasias of interracial romance, and Jean-Michel Basquiat, whose linear panache qualified him as the greatest of American neo-expressionists. But Marshall’s “Mastry” has a breakthrough feel: the suggestion of a new normal, in art and in the national consciousness.” 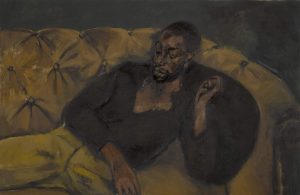